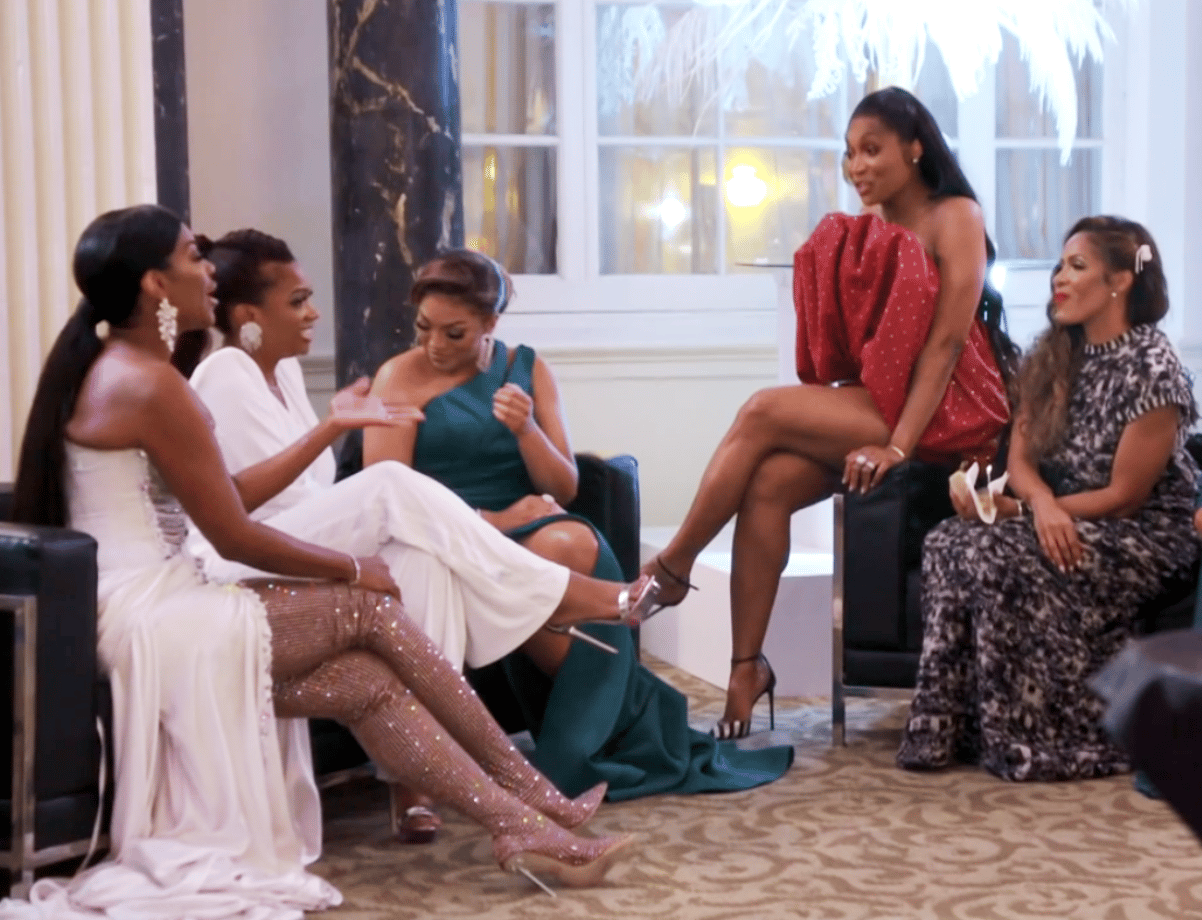 Our Real Housewives of Atlanta are back for season 14. We have one new peach who is sporting multiple Olympic medals and two others who has been trying to snatch a boo-peach for years! Let us keep our edges on point and find out if these new cast changes are going to make our classic peach cobbler a hit again, shall we?

Kenya is dancing up a dust storm with her ashy feet as she prepares for her dance on Dancing with the Stars. She is paired up with the young and handsome Brandon, who is an impressive dancer. Then we see Kandi and Marlo, who looks fabulous and pleased as sweet peach tea to film their scene on the production schedule to have finally snagged herself a peach. Marlo’s edges are finally growing, and she describes the process that she had to go through. Production treats us to her shadiest digs throughout the years, and you can see why she was able to give up the juice and snag a peach.

Kenya describes her connection with Brandon, and they think she might be crushing. Kandi inquires about what Marlo does for a living and knows the money from the billionaire must have run out. She rents her (used) designer clothes on Le’ Archive. Marlo’s dream is to be able to style actresses on the big screen.

Sheree joins the ladies, and she struts in looking for a standing ovation. You can almost imagine her saying, “Who is gonna check me, boo?” She looks beautiful in her ITM, and I am happy for her to get her job back. Kenya then shadily asks Sheree about Tyrone, and she shares he is out of jail, but he was paroled to Philadelphia. Sheree shares that the sex was quick with Tyrone since he has been incarcerated for a long time. Wait one second, excuse me now, she is practicing abstinence? Kenya is concerned he will be getting some kitty somewhere else. Is Sheree’s storyline this season an episode of Love After Lockup?

Kenya shares that she went on a family vacation with Marc and Brooklyn. She wants him to sign the papers, but why is she still traveling with him as a couple? Kenya is riding on a carousel of dysfunction, and she needs to leap off.

Marlo is still caring for her nephews, Michael and William. She has been taking care of them for three years. Marlo admits her priorities have changed since she has taken the boys in. She does charge them for breakfast and tells them to Cash App her. Is she trying to teach them responsibility or trying to make money for herself? Side note: Marlo is killing it in her ITMs with her looks. She looks like a different person in her hot pink dress.

Drew and Ralph are meeting our new housewife, Sanya, and she is married to the very handsome Aaron Ross. Please give me a moment to swoon over the very handsome Aaron since I have never gotten over losing Chris Samuels on RHOP. Sorry, I digress… let’s get back to Drew’s nonsense storyline. Drew has a new workout program called “Drop it with Drew” that is allegedly nationwide. She decides to race Sanya and thinks she can compete with Sanya with her rock-hard body, but Sanya could have beaten her just by skipping — backward. Sanya in her ITM is concerned about how Drew is going to drop it in her workout video when she cannot drop it into a squat. Side note: I am loving so far this addition of a true Olympiad and an NFL player to the Atlanta mix.

Ralph is drafting a book about how to be a stepfather new daddy. He then mentions that he has an assistant that was offering him a massage. Drew admits that she packed the kids up when she suspected he was behaving like he did when he went to Tampa, aka the strip club capital of the world. Bravo, please no more old daddy/new daddy storylines this season!

We then get scenes from all the ladies’ homes with a laptop telegram delivered by a beautiful model. Marlo is sending this poor unsuspecting woman to everyone’s home to play a video on her laptop to invite them to her black-tie event for her rental clothing line. Kenya is rude to this poor woman who Marlo put up to deliver this message. One bonus to this scene is we get to see the adorable Brooklyn this season, so Marc was not able to block her from being seen on the show.

Sanya now gives us a glimpse of her life with Aaron and their young son, and her parents also live with them. Her dad is speaking some patois in this scene, but Bravo gives us the translation. Sanya and Aaron have been married for 18 years and met while in school. Aaron wants to have another child, preferably a daughter. Sanya is fearful to have another child since he checked out after their son was born. I hope this couple does not succumb to the reality show curse.

Drew chats with Ralph about their meal preparation business, and I am sure I can almost hear Shannon Beador from RHOC screeching that she does support other women’s business ventures! Kandi and Sanya come over to give them some feedback. Drew admits that she was body-shamed last season by Kenya. She admits to a mommy makeover and lost 25 pounds in three weeks. Sanya and Kandi are not buying that she is being honest about her weight loss journey. Neither are we, especially when Bravo gave us the real stats on Drew’s weight loss, which is mostly from surgery.

Drew shares that Ralph hired an assistant who offered him a massage. Ralph struggles to produce a reply for what he said when a massage was offered. He breezily claims it was a throwaway reply. Kandi translates what the meaning was behind the comment from the “assistant.” She is married to a player, and she understands the subtext behind the text.

Marlo arrives at her event and is not dressed yet to impress. Todd and Kandi arrive, and he is already shading Marlo’s designs. Sanya is confused by the grammatically incorrect title of her clothing showroom and what exactly she is attending. Marlo allegedly even has JLo’s famous Versace dress. She is still not ready, and the event started at 7 p.m.

Kenya has arrived since she was just sent home on Dancing with the Stars, missing her chance to win that ridiculous mirror ball trophy. Drew pulls Kenya aside to try to find out why they could not connect. She is hoping for a clean slate with her. Kenya thinks that if she can move forward with Marlo, then she can move forward with anyone. Marlo acts like she came up with the idea for her business since she is willing to share clothes — but it comes with a daily rate. She claims to have spent $40k on this event and is confident she will make $120k on it with all her A-listers.

WTH is Marlo wearing, and Sheree thinks she resembles the strawberry candy from her childhood. It looks like she slapped speckled couch cushion fabric on her chest, which is reminiscent of Carol Burnett channeling Scarlett O’Hara wearing the drapes on her show. Marlo should have stuck with her first look, which was a lot more flattering. She has an interesting cast of characters at her event. Sanya and Sheree run to Marlo and tell her that the other girls do not understand the event. Is Sanya a new bone collector in training? Marlo still has flashbacks about the marching band with Kenya and a megaphone. She is done with these basic b*tches.

Marlo expects the “money girls” to understand that she needs to be able to make a dollar off the clothes she scored from old rich marks her rich suitors. Kenya thinks Marlo, who had a ballroom without a ball, should, “Save her money from her johns for a new FedEx label to ship your used clothes to eBay.”

Kandi is perplexed about how Marlo still has money from these old geezers and credits Marlo for saving her money. The topic of private school is mentioned, and there is a suggestion that it would be a true status symbol to have your kids in them. Marlo assures everyone that her nephews are doing simply fine without going to private school. She is the self-proclaimed hero to save RHOA from being shipped off to Peacock. We will all have to tune in to see for ourselves…

Next week, we see more of Sanya. Kenya tells Sheree that her assistant is telling all her secrets. What did you all think of RHOA without Porsha and Cynthia? Did you miss them?