Home Real Housewives of New Jersey News RHONJ Reunion Recap: Teresa Slams Brother Joe for Getting Too Involved in Drama, Melissa Calls Her Out and Joe Quits After Blowout, Plus Dolores Calls Jennifer a Liar

RHONJ Reunion Recap: Teresa Slams Brother Joe for Getting Too Involved in Drama, Melissa Calls Her Out and Joe Quits After Blowout, Plus Dolores Calls Jennifer a Liar 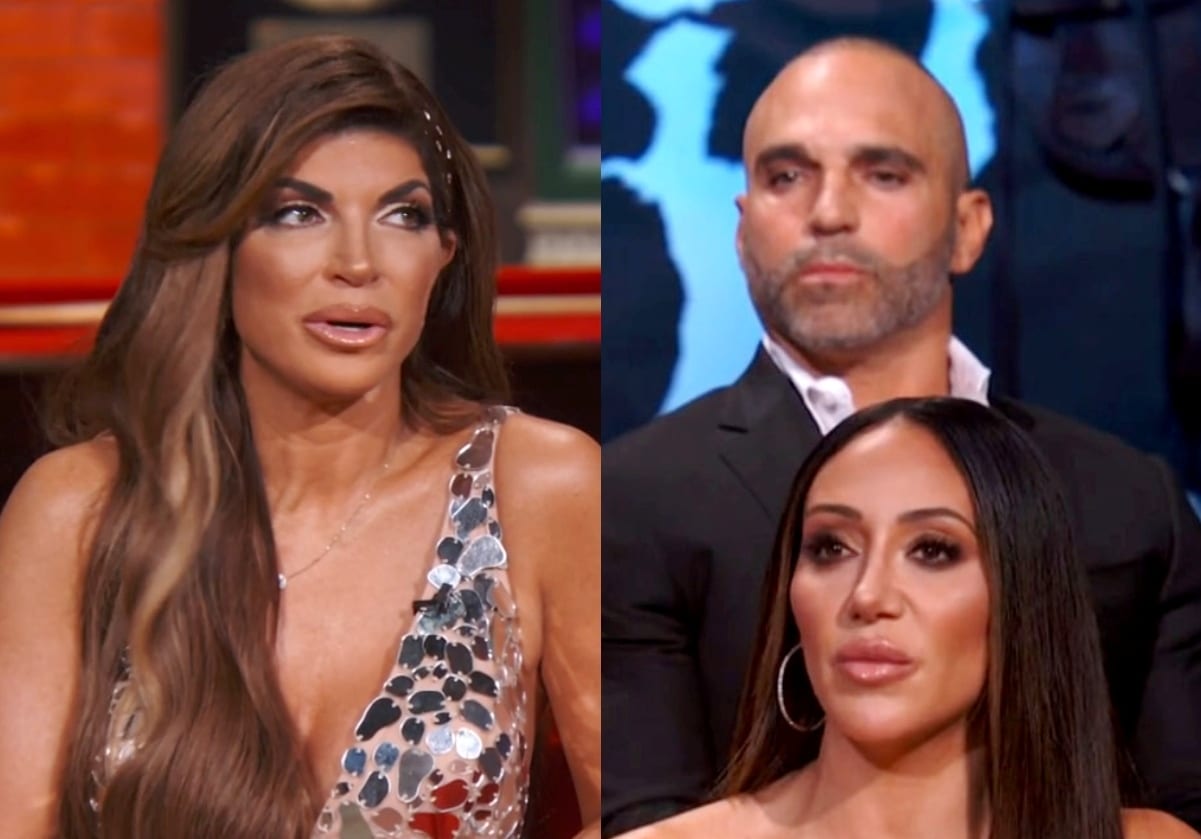 This week, the Real Housewives of New Jersey have their reunion! Andy already has stated that this taping was exhausting, and he says he really lost his sh*t so I can just imagine what we are in for! Grab a cocktail or two since you will need it!

First, I always pay attention to the seating arrangement. There was a report on our site that Jackie has been demoted to a friend role, but she is somehow in the middle seat. Melissa and Dolores are at the end of both couches, so this decision does not make a lot of sense to me. Next, outfits. IMO, Jennifer looks elegant and stylish. Melissa has the body to wear the dress she is wearing, but it is more meant for a club. Dolores is a beautiful woman, but she needs to remember less is more. Margaret dresses like a frumpy madam. Now, my least favorite attire goes to Teresa, who is obviously pandering to Andy’s love of jumpsuits. Teresa is wearing a reflective outfit with the boobs on parade, and she deems herself the fairest of them all. She also has her hair accouterments in to try to distract us from her hairline.

Andy first talks about the Nashville trip from hell, and Jackie wants no part of bull riding again since she was almost decapitated. Margaret shares her favorite Hungarian expression, which just so happens to be “stick it up your a*s.” IMO, there are a few people at this reunion that she would like to direct that comment to! Andy asks Jennifer about her marriage and her plastic surgery. She had her chin removed, but she will leave her nose alone. Jen claims all is well in the Aydin household.

Jackie has assembled a team to help her with her eating disorder. She has organized a group of support professionals to help her on her road to recovery. Jackie really should have considered an in-house treatment program like the therapist recommended, but she wants to control how her treatment plan is managed. Ugh, sigh, wish her the best on this.

Andy is all googly over Teresa’s reflective outfit, but he sees it as more fit for a nightclub than a reunion. He congratulates Teresa on her engagement, and she makes sure to say that Louie picked her ring out. Why do you need to clarify that unless you picked it out and bought it, Gunvalson-style? Teresa is supposed to not scream and yell due to her appendectomy. Trust me on this — that does not stop this raucous beast from pounding her chest and screaming!

Dolores is happy with her new guy and they are using the L-word. She admits that she did not talk about her feelings with David. I wish nothing but the best for Dolores, but she needs to cut the cord with Frank — that is no way to start a new relationship. Based on the previews, Frank is not a fan of the new guy…

Andy then delves into Jersey’s version of loyalty. Production provides the clip where Dolores refers to Jackie as “this.” Jackie telling Dolores that she is not supportive of Jennifer has really ticked Dolores off. Dolores then mentions the comment that Jackie made about Bill not putting his d*ck in someone else. It is not a nice comment at all, BUT Jackie meant that NONE of this would have happened if Bill were not playing doctor with pharmaceutical reps.

Andy then decides to ask the ladies who would they be more afraid of in a dark alley. Dolores wins the scariest, but Teresa takes issue with that since everything is a competition with this one. Teresa rolls her eyes at Jackie when she reiterates that she is an accomplished woman. Jackie takes issue with anyone claiming Evan cheated on her. She and Marge are best friends and chat on the phone every night. Jennifer wants to know whose idea was it to share that she called Tenafly between Frank and Dolores. She thinks Dolores was playing both her and Marge and then jumped ship and landed on Marge’s barge.

Dolores then gets called out for being cold to Jennifer, but Jennifer thinks Dolores had a hidden agenda. She is furious since she has defended Jen when she was indefensible. Andy is wondering what happened between these two. Me too! Jennifer insists that Dolores is not a good friend. These two start the “shut the f*ck ups” with each other. Dolores tells Jennifer to act like she has a happy marriage instead of behaving like a sniveling mess. Jennifer wants to be able to cry if she wants to. From the great lyrics of Darius Rucker, just “Let her cry.”

Andy asked about Jackie’s comment about Bill’s d*ck in someone else. Jennifer, now seeing the scene, understands the context. However, she has a warped definition of friendship, which requires blind loyalty to one person (Tre) and kissing her hairy a*s when requested. Jennifer and Teresa, IMO, are meant for each other. She then accurately slams Jackie over crying about a rumor. Jackie and Dolores are fine now and in an alliance with Marge. Dolores is disgusted with Jennifer, and I could feel the heat coming out of my TV from Dolores.

Andy wants to talk to Teresa about her love bubble. Teresa pretends that Louie did not know what came with being a housewife. She then hysterically says knock on wood that they have had no fights, and I swear I saw her tap her noggin with that assertion. Teresa can knock all she wants since no one is home in that head of hers…

Teresa can see the difference in her relationship with Joe Giudice. She then shares that the girls all adore Louie. Teresa admits that Milania and Gia liked to walk around naked and now they are unable to. I am sorry, that made me feel a little ick that she shared that. Teresa is not going to comment on the prenup question. She asserts that Louie has more money than her. Andy and Bethenny Frankel even want her to do it. He almost begs her to at least consider it. Dolores was not invited to the engagement party since she was not part of a couple that they socialize with. I wonder whose rule that is.

The bridesmaid question is brought up, and Melissa is flummoxed about how Louie’s sisters are closer to Tre after just one year. Melissa wants to stop faking like they have a relationship. AMEN! She takes issue with where they were seated at the engagement party. Margaret tries to interrupt when they are arguing about the seating at the engagement party, and Teresa tells her, “F*ck you, Margaret shut up!” Side note: Melissa should be happy that she does not have to be a bridesmaid at Teresa’s clown show wedding. She should count herself lucky since can you imagine the dress that Tre would have chosen for her?

Melissa reminds Teresa that she was in her wedding to Joe. Teresa was annoyed that she did not change the date of the wedding since she was pregnant. She believes a good sister-in-law would wait until she was no longer pregnant. WOW, the delusion is real with this narcissistic dolt.

Joe Gorga joins the group, and the bridesmaid issue is brought up. Melissa calls Teresa out on her family bullsh*t. She claims to love Teresa and wants to be family again. Teresa then digs up from the trenches of RHONJ basement tapes where Melissa was friends with Caroline and Jacqueline. She will NEVER forgive them for coming on HER show and remaining friends with people she no longer associates with. Damn, that woman can hold a grudge — she should have been cast in the movie with the same name! Joe is disappointed in the whole situation, and he really seems defeated I must admit.

Teresa and Melissa’s relationship is discussed and how they both claim to try to get closer to no avail. She asserts that Melissa stood by Margaret this season even though she was asking questions about Louie. Teresa expected Melissa to shut the b*tch up. Melissa sees all the roads always lead back to her even though she stood by Teresa when she acted up — this season. Andy calls Teresa out on her loyalty to Melissa, and you can almost see Teresa’s brain short-circuiting since she cannot produce one example to prove her point. The bad energy emanating from her head causes a total blackout in the studio. The other ladies think somehow Marge will be blamed for this too. Side note: I do believe that Teresa has perfected the art of talking stupid, and there is no translation for all of us who have a normal, functioning brain.

Andy then delves into Teresa allowing Jennifer to keep calling her brother a crook/crooked plus b*tch girl. We then find out that Jennifer is always high and thinks she functions better, and you can see Andy agrees with that assertion. Joe wants to know if Louie would like to be called either of those names, and she acts like he would not care, but we now know he has been publicly called those names by others. Teresa thinks that her brother is a b*tch girl since he behaves like a housewife. She cannot understand why he is the only partner on the stage now, but Andy reminds her that this is his choice since he has always liked Joe.

Teresa then gets called out by a viewer who found Gia to be disrespectful to Joe. She defends Gia by saying she is strong-minded, and she will not correct her. Joe Gorga wants to know how Tre’s girls can defend their dad after they lived with him and heard things he said on camera about her. He mentions the social media posts where Joe Giudice posted negative stuff about him, but the girls do not say anything about that.

Melissa is upset that Teresa did not defend her during her fight at the Shore with Jennifer. Tre is unhappy that Melissa did not say anything when Margaret came after Louie. Melissa pretends that she did not hear Margaret ever say a negative word about Louie on camera. It all goes back to Teresa hating to be questioned by anyone except Louie since he is her man Tarzan.

Joe finally has had enough and announces, “I quit!” Melissa looks at Teresa and tells her she puts him down all the time and he is fed up.  I swear, after watching this trainwreck of a reunion, I need to be high to get through episode two!

Next week, Andy tries to rein in this crazy group to no avail. Be well, everyone, and see you next week!