RHOA Recap: Drew and Sheree Almost Come to Blows, Plus Drew’s Assistant Accuses Sheree of Not Paying Him and Allegedly Spreads Gay Rumors About Ralph 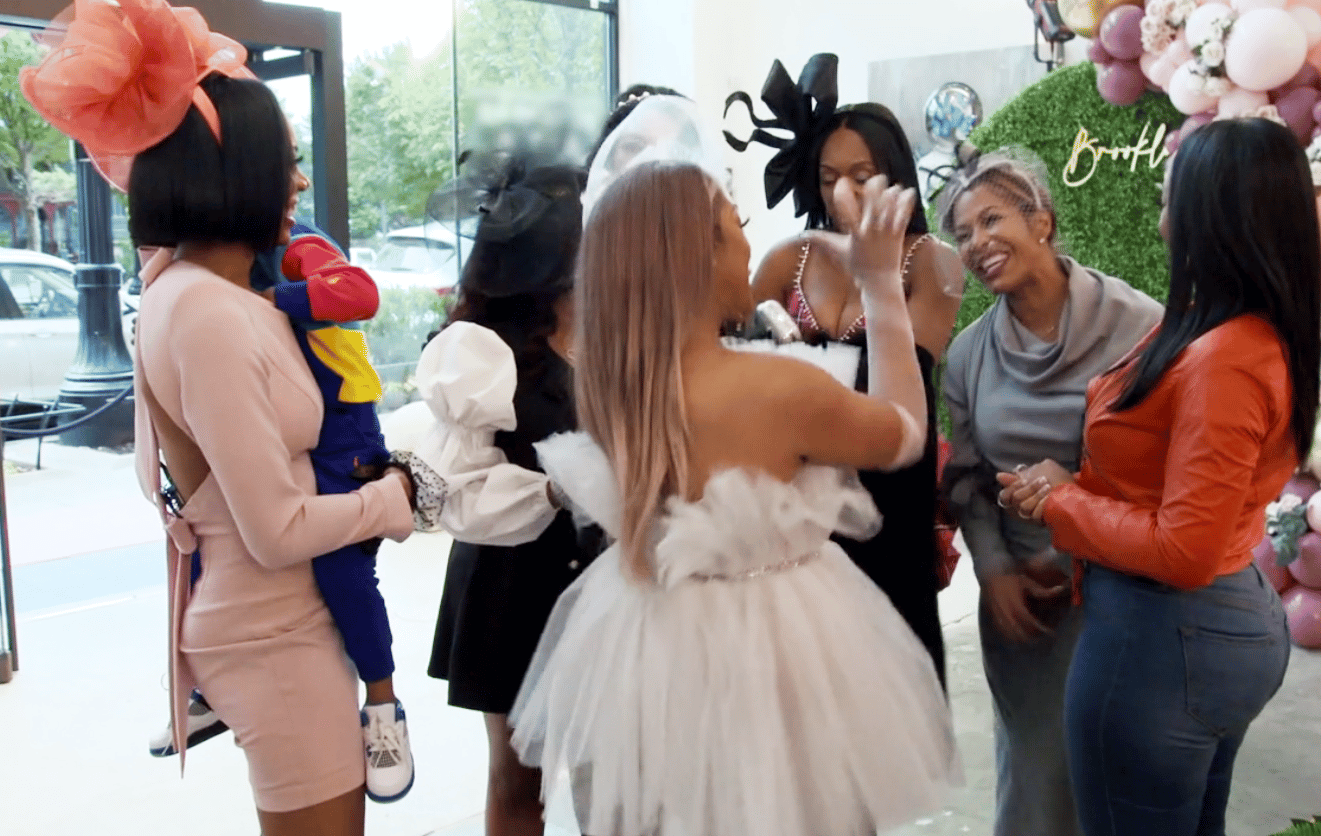 This week on the Real Housewives of Atlanta, our juicy peaches manage to spill some very inappropriate tea at little Brooklyn’s birthday party. Who will be forced to mop up the mess and stop these shady ladies from putting their hands on each other? Grab a glass of tea infused with Veuve champagne and let us find out, shall we?

We first get treated to some adorable shots of the cute kids from Atlanta. Little Blaze and her big brother Ace are both just precious and getting so big. Drew must run out to the school bus wearing her bright red robe and some very ugly slippers. Haven’t we all had to do some embarrassing things to get our kids off to school? Sanya’s adorable son Deuce with his cute little dimples looks like a happy little boy giggling at his parents, which just makes me melt and so does his handsome daddy.

Kenya is planning a fancy tea party for her adorable daughter Brooklyn, which costs anywhere from $10k to $15k. She shares with the party planner that Marc will not be contributing to the party costs. Why does she have to share such personal information with the party planner? Is she looking to win the Mother of the Year Pageant??? Kenya also lets us know that she has physical custody and Marc must come to Atlanta to see his daughter. She mentions that the only item that is pending on their divorce is the issue of spousal support since child support is being paid by him. Side note: I HATE defending Marc with every ounce of my being, but why should he be expected to pay for an expensive tea party that Kenya wants to do for filming? At least he pays her child support, and not everyone is fortunate enough to get that.

Sheree and Marlo are meeting up at the gym, but Sheree is the only one who is working out. She looks fantastic and is really a pretty woman — even if she allegedly does not pay her vendors. Marlo questions Sheree about the nasty shade that was allegedly constructive that everyone has been throwing. Marlo absurdly brags about her acting career, but she cannot get the acronym right for IMDB. She remarks in her ITM that she would get her money back if Sheree did not pay her back or she would throw a glass bottle at her. Sheree shares that her very handsome son Kairo is working in the wardrobe department for the incredibly talented Tyler Perry (Love me some Madea). Sheree said the streets are talking about Drew’s messy marriage to Ralph, and so is Tamra Judge saying Drew’s storyline this season is fake. Marlo shames Kenya for texting her invitation when Marlo gave them all a fancy invitation to her event.

Kandi is celebrating that ticket sales are up for the play she is producing. She has invited the ladies to see the show in NYC. Kandi has booked another role and wants to score an EGOT. She has already scored a Grammy but needs to complete the acronym. Todd talks about their sex life as being nonexistent since she has been busy working. He is more interested in pushing his own projects and shacking up in his NJ apartment. Kandi feels like Todd has not allowed her to participate in all his projects. She acknowledges that he does not get the credit he deserves when he works on her projects.

Drew randomly goes shopping for Brooklyn’s birthday with super shady Anthony. They chat with producer prodding about the Sheree rumors about her being broke and liking to stiff people. Anthony reiterates that Sheree never has paid him, and he has a friend that will not work for her unless they get $25k upfront. Production shows clips with headlines showing Sheree does not pay her bills. Sanya then frantically calls, and she is terribly upset since she had a car accident. Drew comes to pick her up since her car is wrecked.

Sanya and Ross are back home since he has been out of town working on his chauffeur business. She shares what happened when she was dragged by a semi. Ross looks genuinely concerned about his wife, and I am really liking their addition to the show.

Kenya’s party for Brooklyn is just precious and a little girl’s dream. She is upset that everyone is late and will not let Brooklyn come out until more people arrive. OH MY, Sheree in her ITM looks like Morticia Adams talking about the party. Thank God she did not waltz in with that get-up! Sanya, who is pretty in pink, arrives with dapper little Deuce. Drew comes wearing a super-short white dress that looks like a giant Kleenex that has been pulled out of the box and a thick belt cinched at her waist. She needs more than a therapist — she needs a stylist and to stop comparing her looks to Queen Bey! Little Brooklyn makes her grand entrance and looks overwhelmed by all that commotion.

Kenya decides to play a game that is all about little Brooklyn. She then decides to do a shady tea game, and you know this crap is so producer-driven at a child’s party! Kenya does not see anything wrong with this game since they are sitting at the adult table. Kandi draws the first card, which just so happens to be about her, and it says that she sucked a d*ck in a locker room. She wants to know who wrote that about her since she claims it was a lie. Kandi is “highly offended and would like to know who decided to put this on the card?” Side note: I do not know who wrote it, but Kandi is open about her sexuality, and if she did it, she would own it. Did a producer put that in the hat to provoke a reaction?

Kenya, who very suspiciously enjoyed getting this reaction from Kandi, wants to just move on and comments about her being tardy. Didn’t Kandi say in the beginning that she was late since Blaze had to take her nap? Marlo then gets shaded since you cannot order on her site since it is empty with no content. Kandi is tired of Kenya and Marlo always going at each other’s necks, and so are we!

We then get into how Anthony has managed to find a sweet spot to insert himself into each episode this season. Anthony maintains that Sheree was like a sister to him, but he had to cut ties because she never paid him. We then get barraged with a bunch of name-calling, and one of the moms decides this behavior is not acceptable for her little girl to be subjected to. Kenya jumps up and tries to talk to the mom, and she inexplicably tells her to not “let it be personal?” She tries to get her to stay, and you can see Kenya can clearly see this mom has a valid point. Marlo, who has zero class, must throw in that “you should not invite your white folks up in here.” Side note: It has nothing to do with the color of your skin to not want your little kids to hear the way these ladies were speaking to each other at a CHILD’S birthday party.

Drew’s shady tea backfires when Sheree’s friend Fatum claims that Anthony has been saying that Ralph is gay. She is shocked that Anthony has put out rumors that Ralph is gay. Drew starts waving her hands in Sheree’s face. She acts like she always talks with her hands waving in people’s faces. Drew cannot be that dense about what that hand action can cause on the other RH shows, such as RHONJ, RHOC, and RHOP. Is she acting so thirsty this season so she can keep squeezing her peach till she gets every drop out of it? Kandi says we should not be playing this game at a kid’s party. AMEN! Sheree bizarrely compares what Porsha did to Kandi is like the accusation of her stiffing people. There is no way that being accused of drugging and raping someone is comparable to being a deadbeat business owner.

Kenya then must again divert the topic back to what this party is for, and she wants everyone to sing “Happy Birthday” to Brooklyn. She thanks everyone for coming, and it is picture time. Kenya bizarrely thinks that Brooklyn’s birthday party was a success because she had a fun time and was in her element. She makes sure we know that Marc is less and less in the picture, and she does not want her daughter to feel like she is not missing anything. Kenya is not playing her cards right if she thinks this display is going to earn her any mommy bonus points. Marc watching this episode could really backfire for Kenya since it was not a good look to allow this freak show at a child’s party. UGH, I hate having to stand up for Marc twice in this blog!

Next week, Kandi has another dungeon-esque event planned for the group. We also see how the ladies are going to continue to battle it out over these Anthony-planted stories. Have a wonderful week, and see you tomorrow night in RHONJ for some more dysfunction!