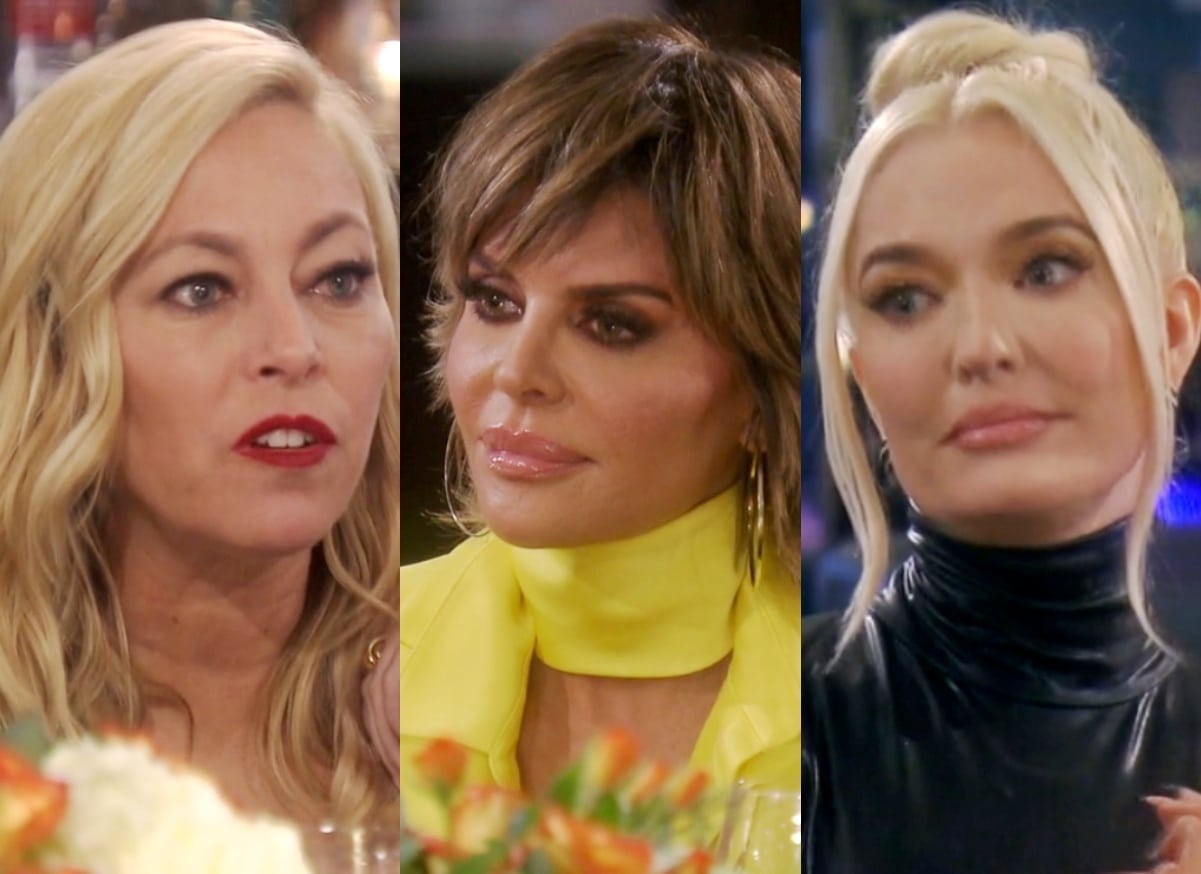 On this episode of the Real Housewives of Beverly Hills, Dorit’s home is buzzing with bodyguards and security guards since the burglary. The boarded-up door is a constant reminder of what transpired. Despite the trauma the incident has left behind, Dorit and PK have decided that they must carry on with their lives and are looking forward to Harry Hamlin’s upcoming 70th birthday party.

Kyle gets congratulated by Rinna for being in the number one movie in the country, Halloween, and the ladies toast the good news. Speaking of good news, Rinna shares that Erika told her she is now in a much better place. Despite her unresolved issues with Sutton, Erika is loving life. Rinna also has unresolved Sutton issues. She is STILL holding a grudge that Sutton called her and Harry Hamlin out on Watch What Happens Live. Rinna lets Kyle know that Sutton made a bad choice by bringing Harry into the girl fight, but nonetheless, Sutton will be in attendance at his party.

Pancake cake — something that Sutton has absolutely made up. Sutton brings Crystal to sample some of this creation, which is really 20 layers of thin crepes, and to catch up. Sutton claims that although she called Rinna out on live TV, she “adores” Rinna and doesn’t want any ill will. According to Rinna, Harry Hamlin sent Sutton a text to stop spreading that rumor, and Sutton never responded. So much for being polite with the proper etiquette…

As Rinna gets glammed, she talks to Harry Hamlin about the newcomer that she invited to the dinner party. Rinna states that Diana Jenkins is 48 and she just had a baby at 47! Well, that’s certainly something unusual. Over at Erika’s, she still has Mikey, her creative director, at her side, and her glam team is jazzing her up, so I guess she is not struggling all that much financially, huh?

Once Harry Hamlin and Rinna arrive at the restaurant, they begin the painstaking process of seating arrangements. Rinna places Sutton all the way at the end of the dinner table, purposely, in the hopes that she won’t bring up the recent drama, but little does Rinna know that Kyle is already busy whipping up some more problems that are bound to surface when tempers get hot.

On the ride over, Kyle muses to Dorit about how odd Sutton behaved right after Dorit’s burglary. Kyle tells Dorit, “While you were going through all of this, she posted a picture of Thirsty Thursday.” Interesting that Sutton is called out for what she posts, yet hardly anyone had anything to say when Erika was posting suggestive pics during the height of her investigation. But let’s talk about being insensitive, shall we? Way to stir the pot, Kyle. She drops that Sutton was not very sympathetic to Dorit’s recent situation, and Dorit looks on in shock upon hearing this information.

Sutton walks in, and she finds herself in the hot seat relatively quickly. The tension is thick and the air kisses are fake. When Garcelle tells Sutton to go “over there and small breast” Erika, Sutton laughs it off, but we already know things are going to head south.

Enter Diana and her fiancé, Asher. Diana Jenkins has yet another indistinguishable accent, a la Dorit, and she lives a big, wealthy life. She claims to be unrelatable and touts her much younger fiancé around to the ladies like a piece of meat. Erika gets introduced to Diana and is already planning how she can get in on the opulence that seems to follow Diana around.

For some reason, PK believes discussing the cost of his stolen valuables during dinner is proper conversation (“My most expensive watch was $60 grand,” to which Rinna retorts, “that’s nothing!”). We also learn that Diana was actually with Kim Kardashian in Paris right before she got robbed. Rinna makes a speech for 70-year-old Harry Hamlin, and the men excuse themselves from the table, leaving the women left to confront the obvious.

Sutton begins talking about the elephant in the room. She tells Rinna that she “over spoke” and that she didn’t mean to hurt anyone when she said those words on WWHL. Rinna does the opposite of accepting the apology and doubles down. Rinna states that Sutton canceled her table at the event and that Sutton left her and Harry Hamlin embarrassed, scrambling for tickets. Sutton makes it very clear that she would not cancel a table and whips out a receipt.

When Diana calls it classless to show a receipt, Rinna agrees (shocking). Sutton is not backing down and calls it slander. She puts on her readers and lets the public know the truth: $11,500 is what Sutton paid for the table. Period. Crystal jumps in and introduces Diana as an underwriter for the charity event. Rinna believes that something is off with Sutton’s “empathy meter” since she is becoming more upset about THIS than about their dear friend getting robbed at gunpoint.

Kyle, no longer wanting to be the sh*t stirrer I guess, tries to get the ladies to a neutral place, and just as the situation seems to deescalate, Erika chimes in, asking Sutton for an apology.  To that, Sutton retorts, “You’re not getting one.  Cuz I don’t like you.” It spirals when Erika tells Sutton, “Go f*ck yourself,” and Sutton returns the directive. The creepiest part is how Erika cackles throughout the whole fight.

When Garcelle feigns leaving because the fighting is just getting ridiculous, Rinna blurts out, “I don’t want to make this a big deal.” She’s the biggest liar. Rinna and Sutton hug it out because Sutton just “adores” Rinna, and just like that, the world’s fakest reconciliation wraps up.

Later, we get a glimpse into Diana’s life. Her house is bustling with help and she explains that she has about five to six houses that she usually bounces around to and from. Diana has a one-year-old daughter and also a 22-year-old son and a 19-year-old daughter. She explains that she was 19 when the war broke out in Bosnia, and she was determined to make a better life for herself. When she met her ex-husband, Diana quickly became loaded, as her ex was one of the world’s richest bankers.

Now, after being single for “five minutes,” Diana’s fiancé is 15 years younger than she is (he is 33, do the math), and she is as happy as can be even IF people can’t figure out if he is her boyfriend or her son.

Kyle meets Sutton at her store, and the ladies discuss Sutton’s upcoming Parisian-themed event. After the small talk, Kyle tells Sutton that she can’t shake how selfish Sutton was the day after Dorit’s burglary. She calls Sutton’s reaction very strange. Sutton calls Kyle weird for remembering that, and she apologizes since she doesn’t remember and was busy working. Kyle can’t figure out what planet Sutton is on while Sutton denies and talks about how she doesn’t deal well with guns and burglaries. Sutton reminds Kyle that she was burglarized when she was 14 and that her dad shot himself, but Kyle tells Sutton this is not about her. Kyle demands to know how Sutton can be so insensitive about the whole thing. But Sutton simply cannot see what she did wrong…