RHOA Recap: Sheree Confronts Ralph With Gay Rumors as Kenya Accuses Him of Tearing Drew Down 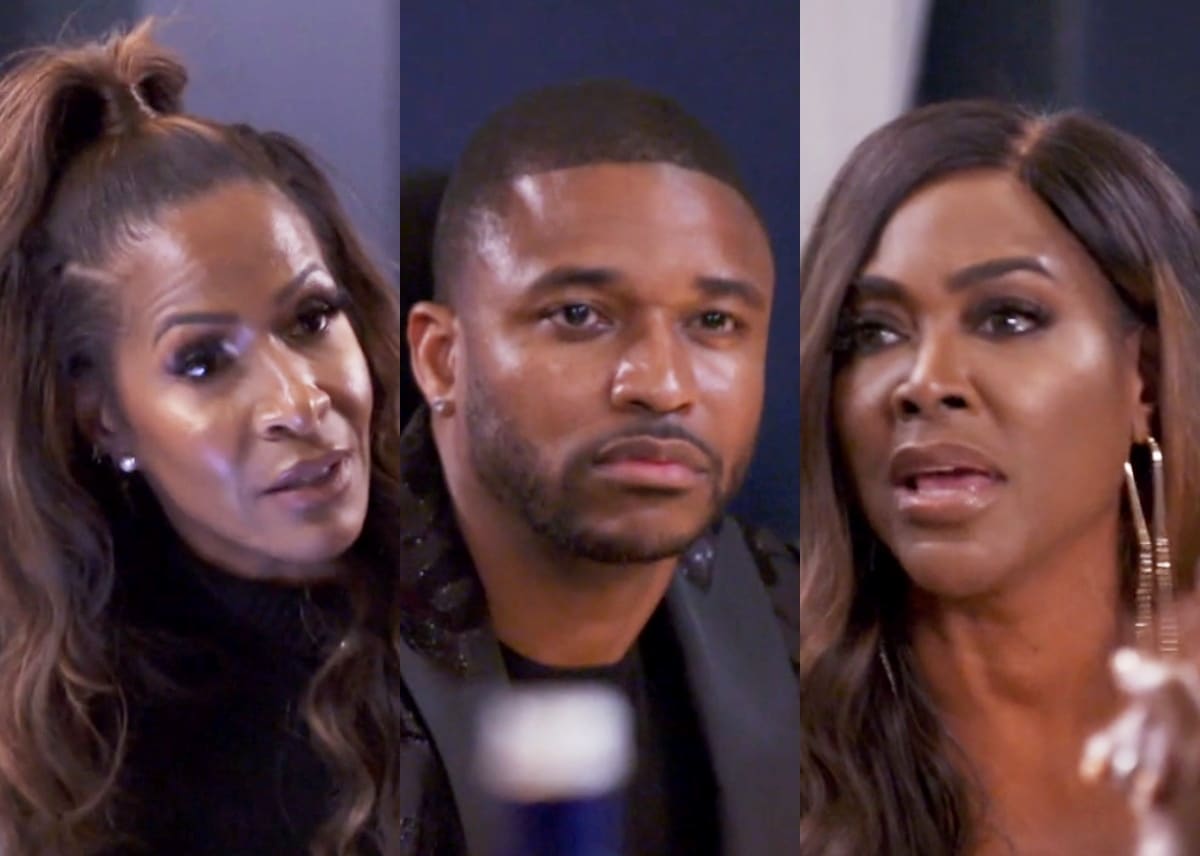 The Real Housewives of Atlanta are heading to the Big Apple for Kandi’s opening. Will we ever know if there is truth to the rumors on the streets regarding Sheree (yes) and Ralph (more likely women than men)? Let us see what the peaches are mixing to stir up the peach tea this week, shall we?

Marlo is getting a department store size closet in her new Decatur home, but the master where she makes her money to fill that closet is smaller. Marlo has great taste in contractors! She has chosen a very handsome contractor named Patrick — who is unfortunately taken. She babbles on about wanting a huge entrance with an elaborate privacy gate to keep out the people who have buyers’ remorse.

Marlo then gets some advice from the “baby builders,” aka Kenya and Sheree, who took forever to build their homes. She then again gets questioned on where her money is coming from, and she has learned to tap dance around to avoid answering that question. Sheree and Marlo inquire if Kenya is going to let Brooklyn see her dad in NYC. Kenya will just have the au pair drop Brooklyn off to Marc.

Kandi and Todd discuss the play in New York and how she is really trying to fill the theater. Todd wants to use this trip to be able to show everyone he owns real estate. Kandi is not feeling this idea, and she would rather stay in a hotel and be able to mess it up. She sees this condominium as a regift from his other girlfriend and does not want to visualize the debauchery that went on and continues to in this place. Please note: Kandi is surprising me with the fact that she is uncomfortable with Todd keeping this place. Is she afraid she will lose her control over Todd if he has something of his own?

Drew and Ralph have Dr. Ken come over for a house call to discuss their trainwreck of a relationship. She tells Dr. Ken about the fancy dinner, but Ralph interjects and says that Drew does not respect him and is insatiable. Ralph thinks he should have packed Drew a Lunchable and a Capri Sun instead of steak and lobster. Drew accredits it to them having a lot of unresolved issues. Duh, do you really think so? Side note: I must mention at the beginning of this “staged” scene that production had to show us that Drew has four assistants, and I cannot fathom why that is necessary. Is Ralph trying to get the pick of the litter of assistants?

Dr. Ken reminds them it is their marriage, and they need to leave his name out of their bickering. He wants to give them a therapeutic agreement. Dr. Ken says whoever blows this agreement will have to cater to the other for 24 hours. He wants them to be extremely sensitive to each other’s emotions.

Drew calls Marlo about the sexy invite. Marlo does not need any more drawers, but has she forgotten that there have been a lot of men who have ripped those drawers off? She thinks Kandi needs a new identity: Freak Kandi Burress.

Todd and Kandi are taking a sprinter van to the airport. She hopes no one will miss the plane. Sanya and the very suave Ross arrive, and Kenya finds out it is a couple’s trip. Kenya would have liked a heads up on that. What would she have done — hire another fake boyfriend to bring on this trip? Sheree has packed her receipts if Drew and Ralph misbehave. Kandi lets everyone know that they will get to see Todd’s infamous apartment. She is hopeful that the other ladies will convince her to accept this place.

Kandi and Todd get the penthouse, and they have a nice spread to chow down on. I love this franchise since they eat — how real is that? Todd lets them know there will be a competition for Penthouse B to see who has the sexiest story. Marlo did it at the zoo with a giraffe licking her face — sike! Sheree had sex at the Ritz-Carlton in Miami during the day. Ralph shares that they had sex with the whales. Kenya shares a story about a guy she dated who liked to hunt coyotes. They had to follow a trail of blood to a cavern. Who has sex while coyotes watch? This story is so bizarre, and I really do not think she had time to make it up. Kenya wins the nice penthouse.

Sanya and Ross talk about the drama between Sheree and Drew. She thinks that Drew is as messy as her assistant. OMG, Marlo is getting her glam on, and I could swear I saw her crotch since her legs were spread open for the next customer. That glam team deserves combat pay and counseling if they ever have to see that again! Ralph is rubbing Drew’s flintstone feet, which are gnarly, and I feel sorry for him. I know that goes against my feelings about Ralph, but feet are gross IMO, and to have to rub those turns my stomach.

Sheree says the streets are talking about Todd and his bachelor pad. Kandi has concerns about what Todd has going on. Todd feels like NY is his comfort zone and Atlanta is hers. He believes that Kandi is an extraordinarily strong woman who has been spoiled and has been famous for over half her life. Hmm, doesn’t some of that apply to him as well? Todd asserts that their lines have been crossed. Kandi defends her work by reminding him that they had to promote their dungeon tour, her acting gig on The Chi, and now she is producing this play. Todd believes his big break is right around the corner. Marlo shades that Todd’s career might take off, but it will never happen without Kandi’s money #truth.

Todd brings the ladies and gents to his New Jersey crash pad. He is calling this an investment property, and Kandi looks very uninterested. Kenya must be looking for a consultant fee since she is throwing out ideas to revamp his condominium. She even has her hard hat and hammer in her ITM to get started on the renovation. Marlo thinks that Kenya is just a bootleg contractor since she knows a little bit about participating in some illegal activities.

Sheree can understand Todd’s desire to keep the place and shades that Marlo only has a plot of dirt. The ladies try to get Kandi interested by suggesting that there is potential for a dungeon in the loft area. Todd is worried since he is going to be 50 and wants to add to his portfolio before Kandi kicks him out.

I love the view from the restaurant they are dining at. Kandi and Drew share they do not wear their wedding rings. Drew claims she took hers off because she was losing weight, and then when Ralph pissed her off, she chose to keep it off. Drew obviously cannot get over Ralph’s transgressions and is desperate to remain on this show.

Ralph had fired his assistant who was offering him a massage, but there are still three more to pick from! Kenya tells Ralph that he reminds her so much of Marc, and we know that is not a compliment. She defends Drew and tells him that Drew wants to feel validated. Ralph asserts that he is really trying to see Drew for who she is — other than when he is gaslighting her at every opportunity. He then blows that opportunity to not look like such a d*ckwad and acts like he does not want to grab any big-butted things.

Drew tells Ralph that he is constantly telling her that these women are just a figment of her imagination. Kenya is reminded of how Marc spoke to her, and then production graces us with lots of examples of his as*holery. She loses any credibility when she tells Ralph that she would flip this table over if she had to experience this level of disrespectfulness.

We then get into the REAL question behind all this nonsense. Sanya has a good point when she says, “If you have an assistant who is being messy with one of your friends might mean that you’re equally as messy.” Drew then brushes that off by saying Anthony is on probation. Sheree then produces her receipts to prove Anthony is playing both sides. Then, the bomb is dropped by saying another little tidbit that was dropped by the annoying gnat Anthony. Anthony claimed that Ralph is gay. Ralph, who is sweating like Louie in NJ, looks busted, and we will have to wait until next week to see how he reacts to that proclamation!

Next week, we get to see the play, and we find out if we will get a glimpse of Tyrone. Have a wonderful week, Blurbers!