Home Vanderpump Rules Stassi Schroeder Seemingly Slams Jax and Brittany for Ditching Wedding Hours Before She Left for Rome, Says “Good Friends Don’t Do That” and Calls Out Lack of Respect

Stassi Schroeder Seemingly Slams Jax and Brittany for Ditching Wedding Hours Before She Left for Rome, Says “Good Friends Don’t Do That” and Calls Out Lack of Respect 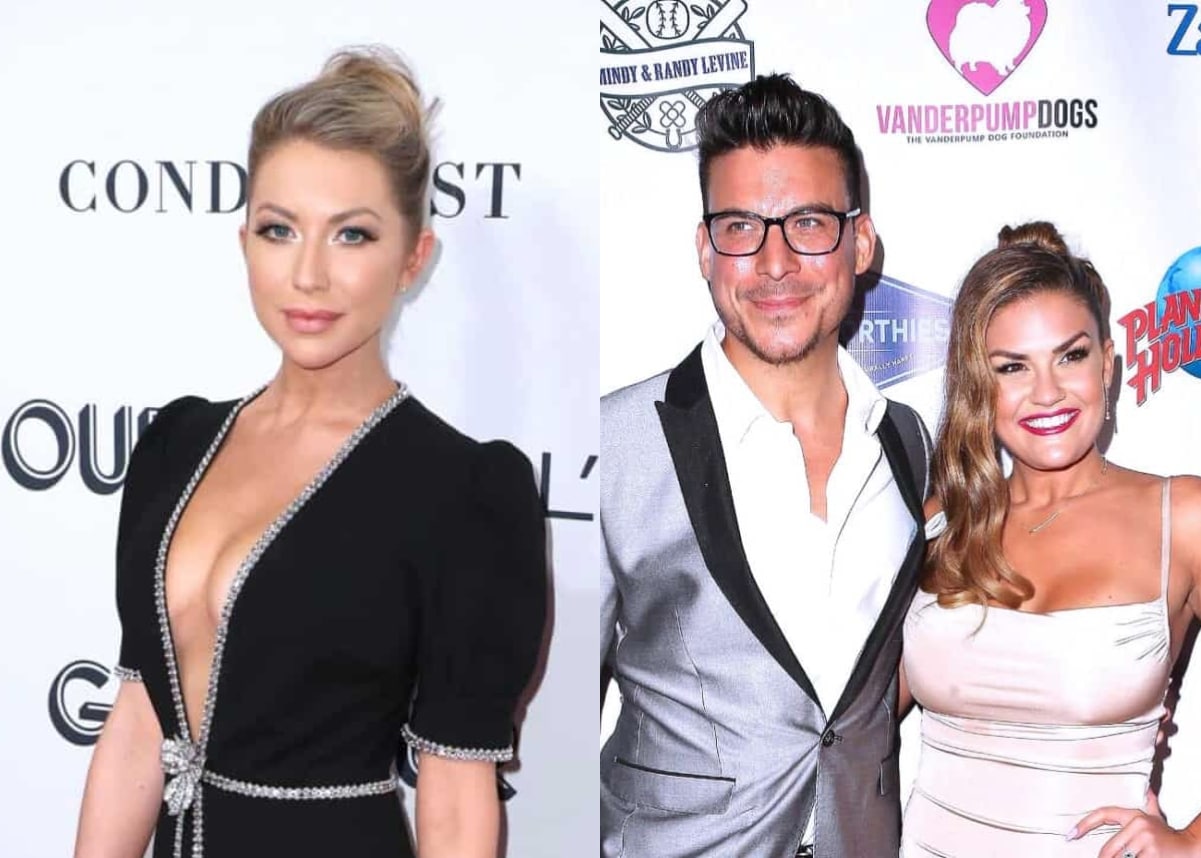 Stassi Schroeder and Beau Clark seemingly weighed in on, and laid into, Jax Taylor and Brittany Cartwright for backing out of their wedding just two hours before they left for Rome, Italy, on the latest episode of their podcast.

After telling her listeners that she’d come across a report on a Bravo fan page that reportedly suggested Jax and Brittany had bailed on their wedding 24 hours prior to instead attend a golf tournament, the Vanderpump Rules alums set the record straight, revealing how disappointed they were in their supposed friends.

“I’m not going to name names but I feel like listeners will be able to… You can gather whoever you think it is on your own,” Stassi began on The Good, the Bad, and the Baby.

According to Stassi, the Bravo fan page had claimed that not only did this couple back out of their wedding for a golf tournament, but the guy accidentally shared the news in a group chat that he didn’t know Beau was in.

“I got so annoyed and also not that annoyed and it became a f-cking joke in a sense… I had people sending me screenshots from multiple one on ones to group threads of this person and saying they’re not going,” Beau recalled. “The first one that I got was April 9. By the end of it, it was so laughable that I put all the screenshots in an album in chronological order.”

Although Stassi and Beau only learned on the day they were leaving for Rome that the couple wouldn’t be attending their wedding, Stassi said the guy had been proclaiming he would not be there for a month to Beau’s friends and “listing a multitude of reasons of why they weren’t.”

“They are RSVP’d ‘yes,’ she continued. “[And] whenever we were around them, they’re like, ‘We’re coming.’ Then it kept happening. And two weeks before the wedding, I was like, ‘We need to address this with them because I’m not playing this game.’ I ordered all the stuff we needed to have in terms of seat assignments and the place cards. So I need to know if I need to quickly ask to get things rearranged.”

While Stassi and Beau certainly had their doubts that this couple would make it to Italy, they believed they were their “good friends.”

“Good friends don’t do that. They don’t talk sh-t about your wedding behind your back or pretend that they’re coming and give a list of reasons why they’re not coming to other people. Friends don’t do that to each other,” Stassi stated.

But rather than wait and see if the unnamed pair would show up, Stassi and Beau decided to text them.

“[Beau] was like, ‘Hey, so are you guys coming to this wedding or not because one of you is texting [my] closest friends that you are not coming with multiple details and reasons why. Very confused. What the f-ck?’” Stassi revealed. “And at first, the dude denied it. ‘What? I haven’t said any of that stuff. I haven’t texted those things.’”

Then, after Beau referred him to the text messages he had seen, the man said, “Yeah, you’re right. I did say that,” but he insisted that the messages were not true and that he and his wife would be in attendance at their wedding.

“And I’m like, ‘Okay. I hope so because there are a lot of people that I would have loved to have invited that I know would love to be at our wedding and two of those spots you guys have taken up,'” Stassi shared. “They knew that we were planning this wedding for this month for a year. So they had ample opportunity to say, ‘Don’t waste an invitation on us because we’re not going to come.’”

“There are people that I really love and care about that I had to uninvite. And so I explained this to them, that it’s kind of messed up that I’m hearing this so I hope this isn’t true,” Stassi added.

Sadly, Stassi did learn that the couple would not be attending.

“The day, not 24 hours before, the day we’re leaving for our flight to go to Rome, two hours before we leave the house, I’m sitting on the couch. Our suitcases are by the front door, everything’s done… I get a text from the girl part of this relationship saying, ‘We’re not coming,’ with many, many reasons as to why they’re not coming. It was a novel. Two hours before I‘m about to go to the airport to get married I get a text from friends that are supposed to be our close friends that they’re not going to make it. It was so mind-blowingly insane,” Stassi revealed as Beau confirmed her reasoning was something he had already read from her spouse.

“I was like, ’Now you’re lying. Both of you are lying.’ This is supposed to be our happy sendoff… I was sitting there going like, ‘Really? This is the type of people we’re having in our lives?’” Beau admitted. “I just want good people in my life.”

Stassi went on to say that she doesn’t know who to believe anymore nor does she have time to figure it out.

“I can’t believe that I took two spots. I can’t believe I thought we were close. I feel stupid that I thought we were better friends than that,” Stassi explained. “I wanna surround myself with [people] that communicate with me, that we have mutual respect. And when I was at the wedding, I looked around at everyone that was there and I was like, ‘God, I love every single person that’s here. I’m so thankful for each person that’s here and what a wonderful group of people that we love — that wouldn’t do that to us.’”

According to Beau, the last text he received read, “We love you guys… So sorry,” and he wasn’t buying it.

“No,” Stassi agreed. “And it’s not about the fact that you guys didn’t come. It’s the way you handled it. You obviously don’t care that much about us or have that much love and respect for us to communicate and handle it in a respectful way and I’m not here for it.”

Vanderpump Rules is returning to Bravo for a 10th season later this year or early next year.