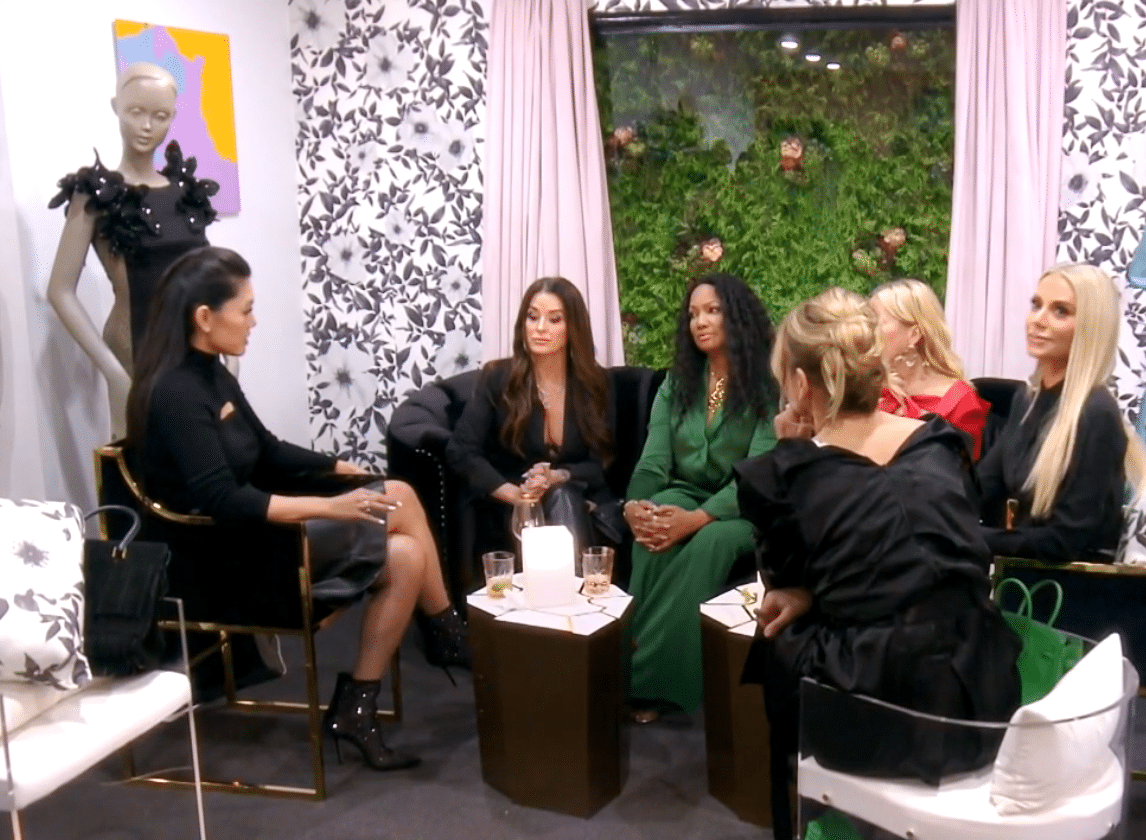 On this episode of the Real Housewives of Beverly Hills, all the women are struggling to varying degrees. But it’s Crystal and her vague comments that really send the ladies into a tizzy. What WAS really said, and how come no one else remembers these “dark” words supposedly said by Sutton?

An early morning breakfast at Kyle‘s house in La Quinta is brought to you by delivery Bloody Marys and Kyle cracking eggs. HOW do you live someplace where you can get Bloody Marys sent to your house, and when can I move in?! Trying to unpack the emotions that ran rampant the night before is difficult for this group, especially for Dorit, who has found herself struggling to feel more like herself pre-home invasion.

Garcelle explains that Crystal wanted to go home after last night’s antics. The group made her believe that her feelings were irrelevant, and she did not feel comfortable or safe. Garcelle, trying to smooth things over before leaving La Quinta, calls Crystal, who is relaxing in her hotel room. Crystal finds it fascinating that no one seems to understand what triggered her reaction the night before, but Garcelle suggests Crystal come and clear the air so the ladies can go home feeling better about themselves. Or something like that…

Kyle reminisces about one year ago, and she claims that Erika‘s persona is like night and day from last year. Erika explains that she felt backed into a corner every day, which would explain (at least in her eyes) her behavior for the last 12 months. Garcelle reminds Erika that she did not “show any compassion,” but Erika clarifies that she cannot and could not say her true feelings about the situation due to lawsuits and legal yellow tape.

Erika then comes out with a bombshell that there is actually a chance these “victims” are lying about never receiving payment. WHAT. Garcelle doesn’t believe this for a minute — after all, why would all these “regular” people be coming after Tom Girardi for his money? Something’s fishy here…

Crystal shows up at the lions’ den while Diana and Sutton decide to lunch over at the hotel. Sutton, the non-meat eater, continues to house bacon, and while she chomps away, Sutton recaps the night before. Diana explains that people have different triggers, and Diana states that she used to be explosive but has since tried to develop empathy. Sutton tries to teach Diana that with this group of women, Diana will need to give them several chances.

Back at Kyle’s, Crystal states that she feels like she is “in some weird therapy commune” and that she will talk about the topic today, but then that’s it — she’ll never talk about it again. Crystal fights back tears and finds it hard to pour her heart out to this group when she can’t feel safe in her emotions around them. Crystal says that she is trying, but Dorit is not buying it. Kyle claims she wants to fix this situation, but Garcelle calls Kyle out for being a “fixer and a stirrer,” and I applaud her for that truth-speaking.

Garcelle goes further with Crystal and prods on, stating, “I feel that when you and Sutton had your thing, I felt like no matter what she said, you were going to say are you that girl cuz I just feel like it was a set-up.” Um, Garcelle. What a comment. According to Crystal, that would be completely out of her character, and she explains that there were a lot more dark things said before the “I don’t see color” comment. Hold up. Crystal surprises everyone by saying this, including Kyle, who was there a year ago when this all went down. Crystal claims Kyle had been drinking, and therefore, she likely does not remember what was said. Crystal also downright refuses to divulge any further detail about these “dark things,” leaving the women to use their imaginations… which is dangerous.

Side note: OMG — Garcelle’s son just got a job working for Lisa Vanderpump. Move over, Kyle. Garcelle is coming in a close second as the group sh*t stirrer. She knew exactly what kind of reaction she was gonna get from that group once they heard that news!

Dorit is struggling with her anxiety after the home invasion and wants to heal from all of it. PK suggests Dorit takes a few days off with some of the ladies in hopes of relaxing.  He fondly refers to it as Operation Punta Minta. Not sure if PK is the best husband in the world or if he just simply wants to get rid of Dorit for a few days. LOL.

Now that the borders are finally opened, Sutton can bring in her French designer and celebrate the couture that was able to come to L.A. Diana explains that she is allergic to dust, and therefore, she does not shop in stores.  Diana is used to shopping at home, where designers send things to her. What a change this party will be.

On the way to the party, Dorit talks about a phone call she had with Rinna. Lois, Rinna’s mom, had a stroke, and, “right now it’s about making her comfortable.” On a different note, Kyle does a bang-up job of freaking Dorit out — paparazzi taking pictures over her fence?! That is certainly not going to help with Dorit’s anxiety.

Dorit is furious that there is press outside of Sutton’s store. She sees it more as a selfish move on Sutton’s part because she simply cannot discuss the home invasion. Well, that seems a little self-important. Meanwhile, Kyle is busy doing the most, as always. Why would this be the perfect opportunity to talk to Sutton AT HER PARTY about what Crystal said in La Quinta?!

Sutton attempts to shut down the “dark comment” talk, and she tells Kyle, “I don’t know why we’re going backwards.” SAME, SUTTON. When Garcelle jumps in, she comes with a warning for Sutton. “Watch your back with your new friend, that’s all I’m saying.” Garcelle feels as though Crystal felt cornered, so she threw Sutton under the bus… and that is NOT friend-like behavior.

Kyle is not satisfied with Sutton’s reaction, and so she brings Garcelle and Crystal into a private conversation. Kyle wants to know why Crystal didn’t defend herself and presses to know what exactly Sutton supposedly said. Crystal states, “She said something problematic, but obviously something forgivable.” Crystal is annoyed that Garcelle accused her of setting up Sutton, and when Sutton walks over, she reminds the women that they have already done this and that she has grown from where she was a year ago.

Dorit wants Crystal to defend herself without opening a can of worms. She believes that Crystal is playing dirty, and once again, Crystal is called out for her word choices. By using the word “dark,” Crystal essentially planted the seed of something ugly. The issues are still not resolved, and Crystal does not appreciate anyone questioning her integrity.

The next day, Dorit is ready to work through her feelings, because although those robbers took many material things, she refuses to let them take her life. Dorit’s therapist comes over and she begins her EMDR therapy that stimulates her brain activity. The therapist takes Dorit frame by frame through the home invasion.

Dorit cries about not being to shake the feelings of fear and worry, and her therapist reminds her that she is safe. Dorit feels far from where she needs to be and knows that she has a lot of work to do to become herself fully again.