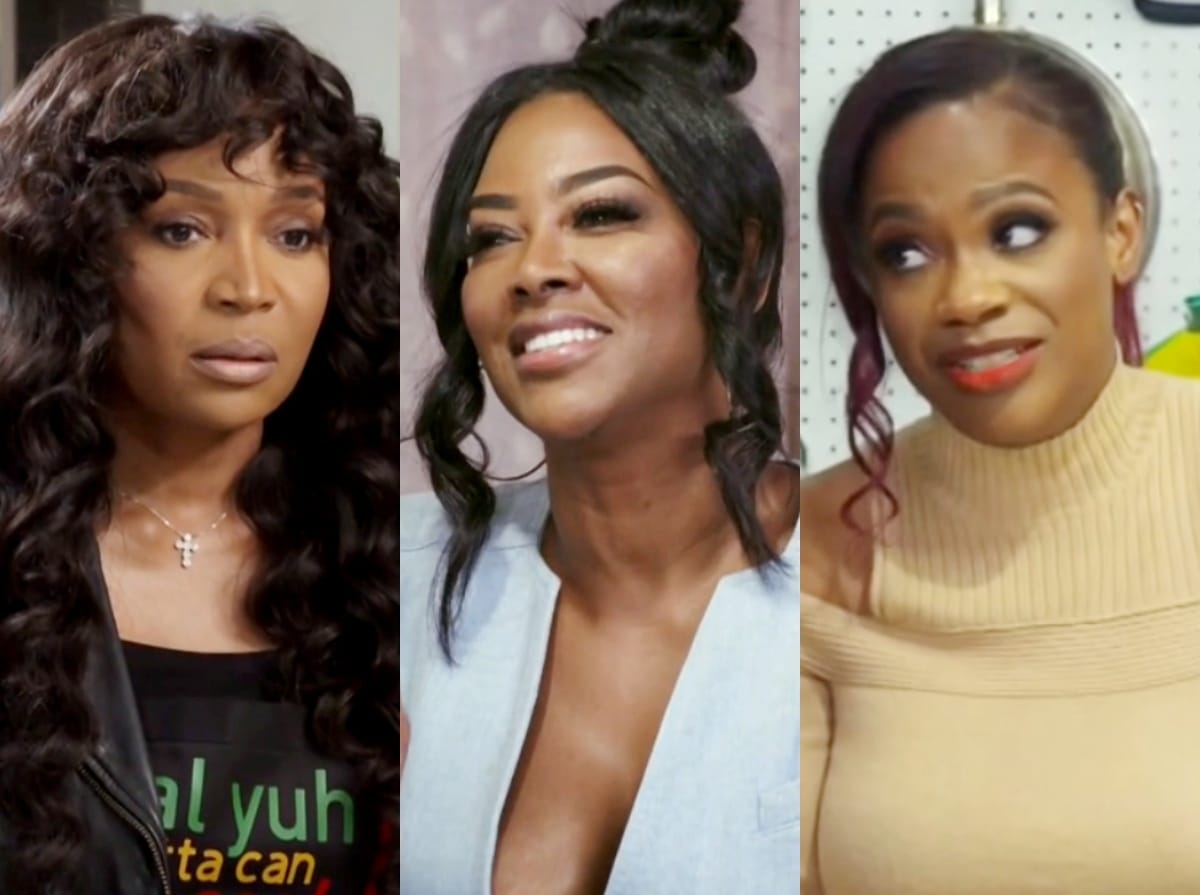 Let us watch the Real Housewives of Atlanta with our bruised peach Sheree, who is dealing with the aftermath of Tyrone standing her up at a sidewalk café in Philly. It is nothing that tasty food, strong libations, and a cute masseuse can’t fix — right? Let us watch this slow-moving episode, but in the end, there will be some truth-telling!

Sheree chats with her daughter, Tierra, about how Tyrone ditched her in Philly. She mentions that he called the next day like nothing happened. Sheree expected an explanation after she made the effort to drive all the way to Philly to see him. She needs to get out of the house, get back on the streets, and leave this guy in the dust. Sheree feels like she has invested so much time in this relationship and is not prepared to give up yet. Sometimes you need to know when it is time to cut your losses. Side note: I am distracted by that gaudy velour headboard and her hideous bedroom furniture. Sheree needs to hire a decorator STAT and leave the parolee in Philly.

Kenya, who looks stunning in a beautiful purple dress, meets up with Drew. Drew, who could always use some fashion advice, rolls in looking like a traffic cone that has been run over by a semi. Kenya wishes they could have been friends last season since they were not on the best of terms and are stuck in similar situations. She basically lets Drew know that she can order anything she wants, and she will not be a broke b*tch and split a check. Kenya is glad to hear that Drew was happy she spoke up. Drew admits she must hold Ralph more accountable. She must do a lot more than that!

Kenya mentions how Marc keeping Brooklyn overnight for the first time gives him a father of the year award. It is not a momentous occasion to show up for your kid. Kenya is still telling herself that Brooklyn needs Marc in her life as some sort of a replacement akin to a mom. She attributes it to not having her mom and how it affected her badly. Side note: Brooklyn DOES have her mom, so I do not understand her reasoning about Marc being the one to give her stability.

Drew likens what Sanya did to her as being sideswiped — almost like a hit and run. Kenya also fuels the fire and tells her that Sanya was shading her workout program. Drew then shares that Sanya uninvited her to her photoshoot. She then thirstily begs Kenya to unblock her on Instagram.

Kenya and Kandi arrive at Sanya’s photoshoot, but there is some miscommunication. Sanya has created a mommy nation to support Black moms, but she is hand-picking the more affluent moms. Kenya never agreed to allow her image to be used without her permission. Kandi knows that Kenya does not do anything that does not involve a check. Sanya wants the shots to be included in a Black Friday sale, and Kandi is not thrilled. Kenya may waive her cut just this one time. Sanya also invites the ladies to a cooking party with her mom. Kenya tells Kandi and Sanya what went down with Sheree and Tyrone. It is sad that the media even took pictures of Sheree being stood up and crying. Kandi is not believing that Tyrone has been waiting for Sheree all this time. She believes that he was entangled in bed with another woman. Maybe Tyrone was just using Sheree for stamp money so he could communicate with his other ladies?

Marlo is having a cheer Sheree up singles party, which includes an in-house shopping experience resplendent in Fendi. She has food, drinks, and a masseuse. Kenya calls and tells Marlo that she is sick and will not make it, but she will send her mule Drew over to deliver the goods. Marlo is not happy that she is not coming and thinks Kenya is a lying a*s.

Sanya shares with her mom what is happening with Drew while they are grocery shopping. Mama Sharon is giving her a pep talk to remind these ladies who they are dealing with. Will the real slim Sanya please stand up? She wants to make sure that Drew knows all about her accomplishments. Mama Sharon is going to cook some authentic food for the ladies. She is not happy that these ladies are not treating her daughter like the Olympiad that she is!

Drew, who looks like her glam entourage, had the day off, and she brings over all the ingredients from Kenya. Marlo thinks that Sanya invited Kandi and Kenya to her shoot since they have a good Instagram following. Drew texted Sanya that she will not be going to her party at her home.

Sheree is at home snacking on her thick-cut sea salt chips. Marlo calls her and tells her to get in the car for a surprise. Sheree would have rather jumped into a Rolls Royce, but at least someone showed up for her!

Drew and Marlo are already breaking into the food. She gets sent out the back door when Sheree arrives since she is a married woman. Sheree is a beautiful woman, and she does not need to keep herself off the market for Tyrone. She spends $11k and was hoping for a freebie. Marlo misspells what is on the cake, which is no surprise since she cannot correctly spell the name of her own company. She tells Sheree that Kenya is not to be believed, and she is not buying that she is sick.

Marlo, who is trying to wake Sheree up, tells her, “I’m just shocked for you to be sitting there looking like a brown Barbie and you’re waiting in dirty a*s Philly for Tyrone who stood you up.” Sheree admits to being a hopeless romantic and giving people the benefit of the doubt more than she should. She believes that he loves her. Marlo tries to get her to see that she would not want that for her kids, so why accept this bullsh*t?

Sheree arrives first at the cooking party and meets Mama Sharon. Kenya then shows up and lets Sanya know that she is sick and is blowing her germs across the room. Marlo arrives wearing these awful pants that are better suited to the Black Widow character. Mama Joyce graces us with her presence too. Marlo is not happy that she must cook at this party, and I must agree with her on that one. Mama Sharon is making curry chicken and brown stew chicken. Sheree is giving Kandi some side-eye and has given her two strikes on their friendship. Kandi has not reached out either time when she could have used a friend.

Kenya is busy sneezing and expelling her toxins into the room. She does tell them that she went to the doctor. Kenya gets grief for not coming to the single-girl party. She is not believed since she was in full glam when she canceled. Marlo wants to know, “Who goes to the doctor in full glam?” Kenya got tested and was told to stay away from the others until she got her results.

The ladies are telling Sheree that she needs to put up a giant roadblock for Tyrone. Sheree obviously feels she needs a return on her investment, and she wants to hold out on the player Tyrone. Sanya then tells the others why Drew was not included in her photoshoot. She claims it was something positive, and she did not want Drew to bring her lack of HBIC bad energy to her event.

Sheree and Marlo go outside to trash talk Sanya and the other ladies. Marlo shades Sanya and the 20 people living in her house. She questions her befriending Kandi after just knowing her for two weeks. Marlo is annoyed that Sanya is picking the cream of the Atlanta crop to befriend so she can gain some Instagram followers.

Marlo then unleashes her real self and lets us know what she really thinks of Ms. Kandi. She dishes that Kandi f*cks everybody for free and always dates underneath her tax bracket. Marlo then goes in on Miss USA Kenya, who was just a video ho and has f*cked every rapper but never got a ring. Who pulled Marlo’s crazy chain? She is like a nasty chatty Cathy whose chain has been pulled off! We then see Drew shuffling through the dirt and getting sand between her toes trudging into the cooking party…

Next week, Sanya reminds Drew that she is an Olympic medalist, and Drew tells Sanya that she is unstable. See you all next week in the ATL, and have a wonderful week!