RHOBH Recap: Drunken Erika Passes Out and Diana’s Anger Towards Sutton Smolders, Plus Did Rinna and Denise Richards Make Up? 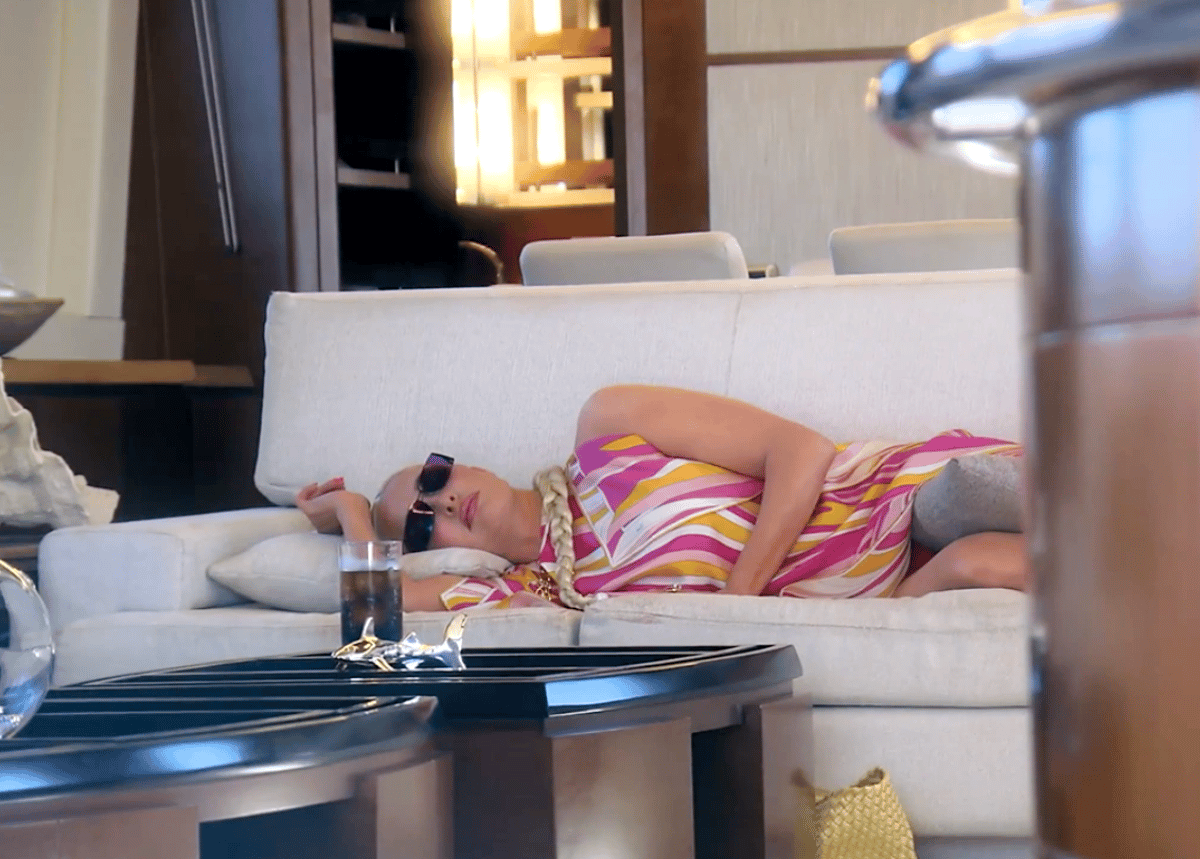 On this episode of the Real Housewives of Beverly Hills, the Punta de Mita trip is bringing some new issues to light (Diana vs. Sutton), and it’s also showing new sides of people (Erika is quite a “pretty mess” after too much tequila).

After a bit of a rocky dinner, Diana, Crystal, and Erika sit down for a nightcap. Kyle and Sutton join the party, but things are a bit awkward, considering Sutton just made Diana cry a few hours earlier. It seems as though that’s water under the bridge since the ladies talk easily about their exes and divorces.

Diana explains that “it was a very, very simple divorce,” and she says that the marriage or divorce was never about money. Riiight. Kyle explains that her ex-husband never remarried, but they have a good relationship, too. When all eyes turn to Erika and her marriage, things get uncomfortable. Erika claims to feel zero responsibility for Tom’s alleged actions — just like “a doctor’s wife would feel” if something went wrong. Erika is the first to bow out for the evening, and Sutton promises not to yell on the boat, which is a nod to Diana and their earlier interaction.

The next morning, Rinna has a peaceful breakfast on the balcony to try and reflect on the recent passing of her mother. In the meantime, Sutton explains that all she does is apologize to the group, but it seems like things are looking up between Sutton and Erika. According to Kyle, Sutton and Erika looked like besties the night before. Maybe not quite the “Bobbsey Twins,” but there seems to be a very distinct change in Erika’s behavior toward Sutton.

Garcelle finds it fascinating that no one is even talking about Erika’s legal woes anymore. Perhaps Erika is just playing nice to keep the ladies at bay… in other words, could Erika just be trying to sidetrack them with kindness so no one questions her problems??

It is interesting to see Dorit, Kyle, and Rinna try and analyze Crystal’s personality. “Do you think Crystal realizes she is playing the victim?” The reality is that Crystal simply holds onto things. She tries to tell the ladies that she does this to internalize and process the issues, but when she remembers the problem, it just comes out, thus making her look very manipulative to outsiders. Crystal hopes to open her mouth more, and in doing that, perhaps more problems could be resolved before they explode.

“Medicated Erika” is already drunk off of margaritas on the WAY to the boat. And what a boat it is, but it’s nothing to Diana. After all, Diana talks about her superyacht that she chartered for $372,000 a WEEK. Erika is messy drunk, and she is telling anyone who will listen. In her stupor, she talks about her boat that she used to have called the “Illeagle….” Interesting, huh?

Diana shares that her brother was killed in war at 19 years old. She took a long time to process this death, and Sutton jumps in to share that her father committed suicide. Diana has a big problem with this because she believes that all Sutton wants to talk about is Sutton.

Erika is resting — aka trying to sober up — and the ladies believe that she is just having fun. They actually like Erika like this, and when Erika resurfaces from her slumber, they hoot and howl as she plops down to eat. Erika talks raunchy to Crystal about threesomes while Diana hops off the boat for a quick swim. The problem is Diana gets stung by a jellyfish, but that doesn’t stop the rest of the group from jumping in.

Erika slurs about being from the south and tells a tale about southerners being “agricultural people,” and TBH, she should just STAY asleep and stop chiming into conversations every 10 seconds. The boat ride ends after Erika passes out for quite some time… after ruining the couch with her excessive body makeup.

The ladies roll up to dinner, and it is shocking to see Erika still standing at this point. I mean, she claims to have had three espressos in her hotel room prior to dinner, but I am not too sure. Luckily, she chooses to pass on the group tequila shot, which is probably for the best.

Over dinner, Garcelle invites the ladies to come to celebrate her upcoming birthday. Rinna is bummed that she can’t attend as she will be in New York celebrating her husband’s show opening. Garcelle shares that Denise will be at her party, so she is kind of sad that Rinna will be out of town since things between the ladies will never be fixed.

Rinna shares that she actually reached out to Denise about a month ago. Garcelle is shocked to hear this news. Rinna sent Denise a text to apologize for how she behaved, and Denise responded well to the text. It was not a very long conversation at all, but Rinna felt cleared by it. However, when Garcelle texts Denise to see if Rinna reached out to her, Denise’s response was, “When?” LOL. Typical Rinna.

Diana feels quite comfortable with the group besides her little meltdown the night before. Leave it to Garcelle to make her squirm. She brings up Diana’s book once more since she felt that Diana’s reaction to the topic was rude. Diana claims to be shy when she talks about her successes, and once again, the subject is mysteriously dropped.

Sutton and Erika are huddled close and perusing Suton’s dating apps. Sutton tells her that she has a date when she gets back home. Look at these two moving on… kinda! Dorit points out the small steps that the group has made within itself, but Sutton hopes that the growth made is legitimate. Sutton hopes that Erika is being real with her. She realizes that Erika knows Sutton is not scared of her… and that is what scares Erika.

Rinna stands up to talk to the crew, and she thanks them for welcoming her after the passing of her mother. She felt safe with the girls, and everyone agrees that this was a great trip overall. Dorit piggybacks on Rinna’s toast, but in true Dorit style, she is longwinded and the message is completely lost.

Dorit, Kyle, and Diana are the last ones standing after dinner. Over some tequila, they talk to Diana about Sutton and explain that there is no gray with Sutton. Diana feels like Sutton contradicts herself a lot (she’s a vegetarian who eats bacon + she doesn’t respond well to screaming and violence, but then yells in Diana’s face), and Diana says she really only gets one shot with her. Diana feels like she behaved well with Sutton’s remarks. After all, Diana states that Sutton “could have gotten headbutted.  I mean, I am Bosnian.”

The next morning, the ladies board Diana’s PJ, and when Sutton asks Diana if she could sit near her, Diana tells her to go back to where she sat on the way there. Ouch. Seems like Diana has not moved on with Sutton. Garcelle believes Diana’s statement to be rude, and Sutton sees that as “retaliation.” Garcelle goes as far as saying that if Sutton sends flowers to Diana thanking her for her plane, Sutton does not have to write Garcelle’s name on the card. Sensing some troubles up ahead for this group…