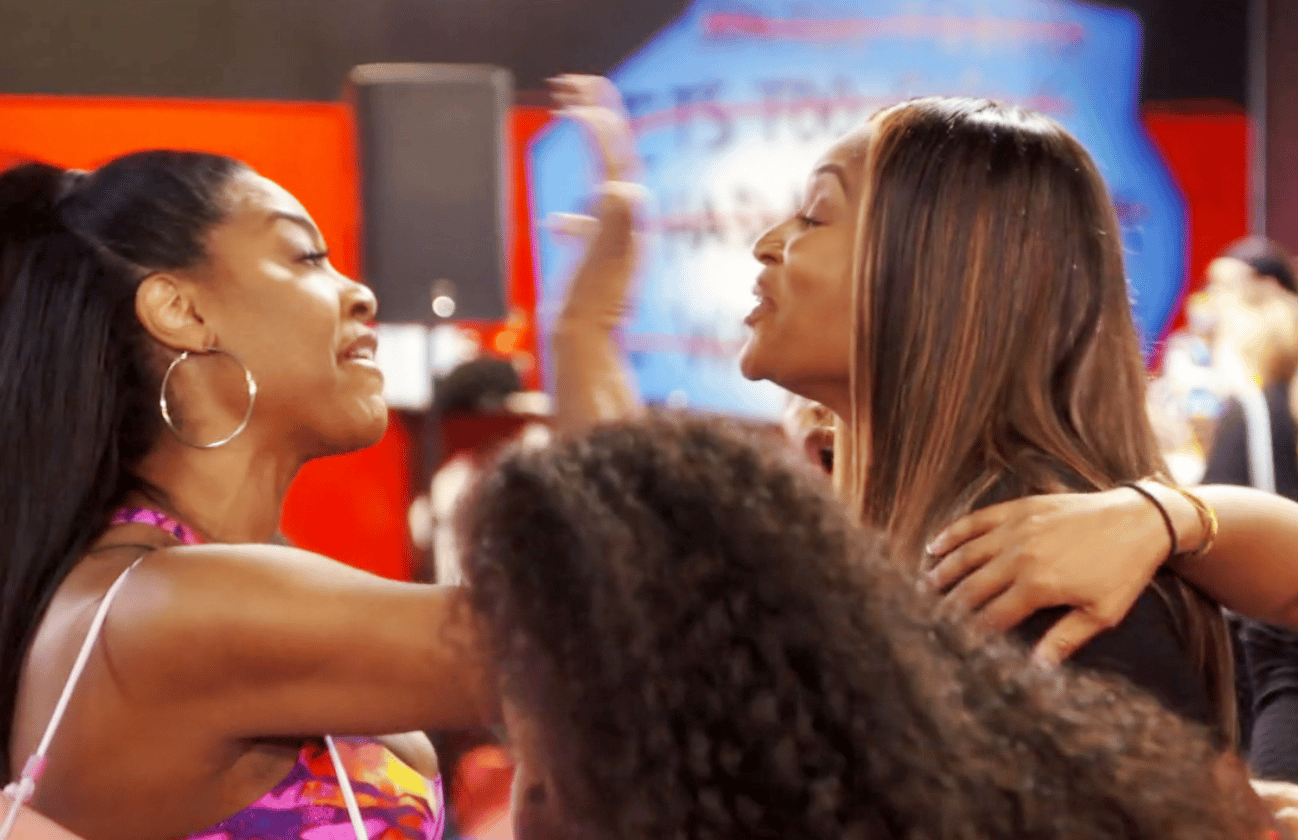 This week’s episode of Real Housewives of Atlanta is titled “Healthy Glows and Low Blows,” so it is basically another week on an RH show. Let us see how low they will go this week and what gimmicks they will do to maintain their youthful glow, shall we?

Sanya must have a conversation with her handsome husband Ross about the amount of traveling he has been doing. She does not want to have another child when Ross is too busy with his businesses. Sanya wants him to slow down and be around more. She is trying to persuade Ross by cooking for him but should have let Mama Sharon do it, and she wants to get him on the same page that they do not need to expand their family. Sanya is trying for a work-life balance, but Ross wants to expand his family. Is this becoming a recurring theme on these shows #tedious?

Sheree, Kandi, and Marlo meet up for an infrared sauna treatment. Kandi is not willing to participate in the treatment since she is clearly not dressed to sweat and is just there to fulfill her appearance contract has another commitment. She talks about the sexy scene that was part of her first day of filming. Sheree is asking Kandi to be around more and to take more initiative in their friendship. She is disappointed that she has not been stepping up more in their friendship. Kandi does not get why they think they are entitled to so much from her. Kandi claims her own family wants her around more. She gets extremely upset when they give her so much sh*t and is brought to tears. Kandi obviously has too many balls up in the air, and she is struggling with her juggling act.

Sanya is planning to make a fancy dinner for Ross with some sweet and spicy salmon. She is struggling while trying to work the burners. Mama Sharon is going to take care of Deuce so they can have some private time. The very debonair Ross arrives, but he looks concerned his wife’s cooking may upset his stomach, so he prays that he will not have explosive diarrhea for a settled stomach after dinner.

Sanya shares that Ross has been gone for more than half a month. Ross is expecting Sanya to give him the same support she did when he played in the NFL. Sanya tells Ross that she is not on the same page about having more children. Ross thinks that his work is a positive thing for his family. He still wants to have another child. Sanya wants to know if Ross will resent her if they do not have another child. Ross cannot promise her that he will not resent her if she does not acquiesce.

Sheree has just hired a new business manager, and she mentions she keeps changing manufacturers. She is hopeful that she can make her dream come to fruition. Sheree, my darling, sometimes you need to know when it is time to walk away — like with this business idea and a future with Tyrone…

Marlo has her nephews at work with her, but she claims they have been acting out. She tells them that her first job was at McDonald’s. Marlo hopes they will help run her business someday, but what exactly is she going to teach them? How to be a grifter? She shares that she spoke to Jasmine, who is their older sister, and she also does not have a relationship with their mom.

Kandi and Kenya are at a candle-making shop, and Monyetta, who has two children with Ne-Yo (fun fact), joins them. Kenya lets Kandi know that Marlo was shading her donation of used goods. Kandi thinks Marlo is planning a hate Kandi movement, and she is not happy about it. They all discuss their invitation to the “Drop it With Drew” event.

Kenya starts giving Kandi sh*t again over sending a naked duo to her house to deliver the invite to her event. She does not want anyone buzzing her p*ssy with Kandi’s vibrating underwear. Kenya is talking about Marlo showing gutter behavior, but shouting at the zen candle shop about buzzing pu*sies is not exactly classy behavior either. Kandi just wants to finish her candle, and she names the scent Kandi’s p*ssy and offers the others a chance to smell it. Sorry, hard pass! I have no desire to purchase a Yankee Candle that smells like ANYONE’S vagina! Side note: What is it with these celebrities thinking that we would like to smell their nether regions like Gwyneth did with her GOOP line?

Drew plans to show the other ladies that her workout app is legit. The producers are being super shady showing everyone’s weight, and that is uncool IMO. Kandi does not believe that the venue is a real “Drop it With Drew” facility, and there is a suggestion that she printed up a banner at Kinko’s and slapped it on a window to film this scene. Production is even super shady showing it was a fat loss camp just days before. Sanya is coming to her event, and she is pretending that she is really wanting to mend their faux friendship. Side note: Did you all see Sanya and Ross on WWHL after the show, who both looked fabulous? Andy sure liked looking at the handsome Ross at the bar — as did I!

Drew seems happy to see Sanya come, but Marlo is keeping up the act of ignoring Kandi. Sheree has dug out all of her She by Sheree stuff, and she almost puts a pop-up tent to advertise her goods. Sanya, with her insane abdominal muscles, talks to Ralph about Ross wanting another baby. Why does she choose Ralph to be the one to go to for relationship advice? Does she not know he is the expert on strip clubs and masseuses who offer happy endings?

Kandi finally calls out Marlo about sh*t talking her. Todd then gets a call, and he pulls Kandi away. There seems to be an emergency. Someone jumped the fence at the community gate and the man was sitting on their front porch. They have a friend named Katrina watching their kids, and they leave to check on their kids.

The others agree to do the Drop it With Drew workout sans Kenya. Marlo shames Drew for losing her weight by lipo. Sheree calls Drew a “busted can of biscuits,” and she has terrible form. I would hate to hear what Sheree would say about my body! Kenya finally arrives to do some detective work on Drew’s business. She starts peppering Drew with questions, and a lady named Jackie is brought out to explain the business that SHE has owned for five years. Drew was brought in to be a spokesperson. Kenya is not buying that Drew was ever a real businessperson since she could not even explain the website that had her name on it.

Kenya then shames Marlo for her smack talk and putting a knife in her back at every turn. Marlo says that Kenya breaks her down at every turn, and then she launches into what she really feels about Kenya. She purports that Kenya was not enough woman for the beautiful Marc. Marlo also questions Kenya’s body parts that are inflating (lips) and deflating (a*s).

Oh no, here come Kenya’s hand like a giant stop sign in Marlo’s face while calling Marlo a pitiful little hoe. Kenya defends her perfect Barbie doll self. The two warring divas finally get separated, and Kenya heads out to the parking lot. Drew comes out to thank Kenya for coming. Kenya does make a good point when she says that Marlo is not good at reading others since she lacks the communication skills that Kenya has. Production then shows quite a few scenes where Marlo has gone super low, but they do not show how Kenya has shredded the other ladies.

Kandi and Todd arrive back at their house, and they talk to their friend Katrina to find out what happened. Katrina claimed the man was a songwriter and a relative of Queen Bey, and Kandi had told him it was okay to come and porch sit. She and Todd are visibly upset over their privacy being violated while their young children were home.

Back at the strip mall, while the tape on the Drew poster is losing its adhesive in the Atlanta heat, Sanya apologizes to Drew. They both agree to talk less and listen more. Sanya tells Drew that she is having issues with Ross over having another baby. Drew says, “You have to do it to please your husband.” She also tells her that she would not want her husband to resent her. Drew was the right person to talk to Sanya about this issue. She knows a lot about how resentment can fester in a relationship…

Next week, Marlo kicks her nephews out??? Have a productive week, everyone, and see you all next week in Georgia!