RHOBH Recap: Garcelle is Upset After Erika Goes After Her Sons, Kyle Accuses Sutton of Lying About Miscarriages Then Apologizes 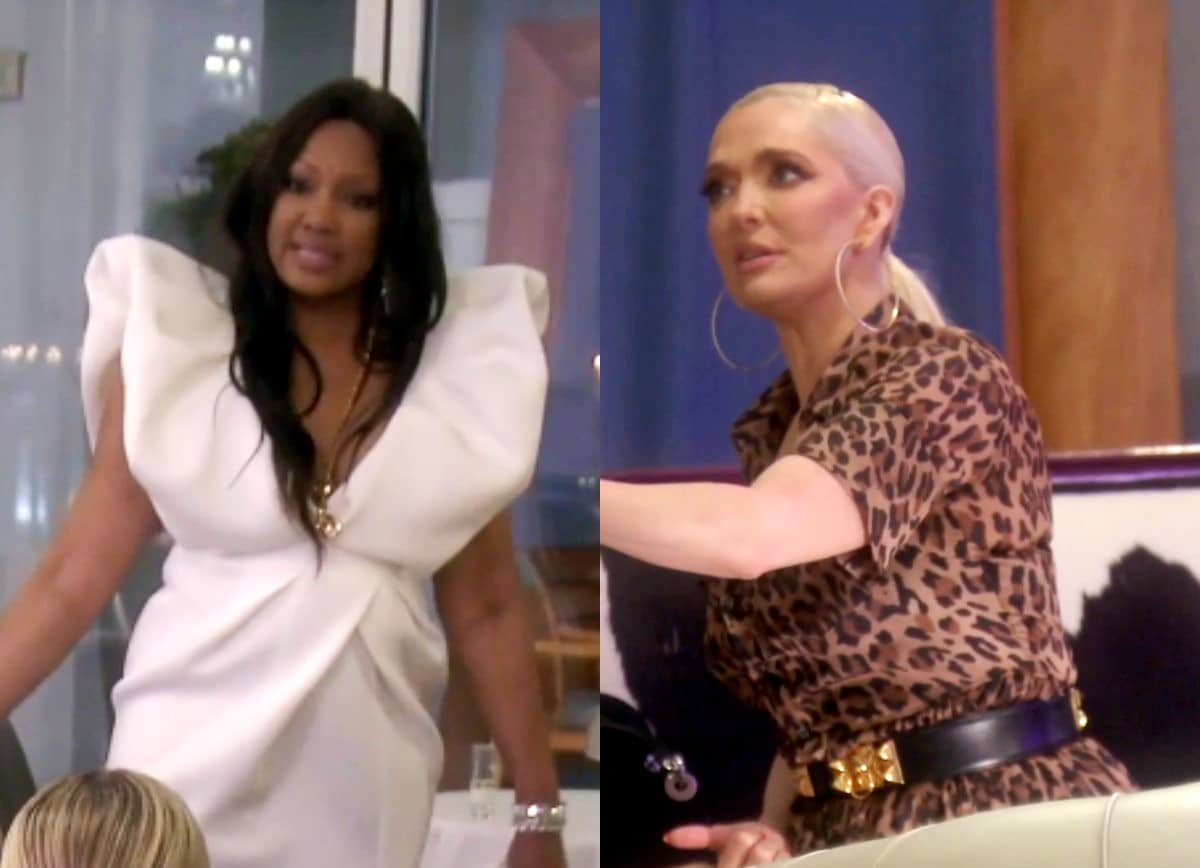 On this episode of the Real Housewives of Beverly Hills, drunk Erika finds herself in trouble with Garcelle, and the Sutton vs. Diana drama escalates. Is Sutton a narcissist? Is Diana soulless? And is Erika’s behavior refreshing and genuine, or is it just downright troublesome?

During Garcelle’s birthday party, a conflict is brewing. Sutton is calling Diana soulless, and there’s no coming back from it. When Diana talks about her miscarriages, Sutton shares that she has had two miscarriages in the past. Kyle, who has inserted herself in the middle of this, wigs out about the fact that she had never heard this part of Sutton’s life. Perhaps it’s because Sutton chose not to share that information, as many women do. But Kyle claims the information Sutton says is out of the blue. Sutton calls Diana a “motherf*cker,” and things get really, really low.

Kyle grabs onto Sutton’s arm aggressively and says, “She lost a baby, you did not. We don’t know.” WOW. That’s insinuating that Sutton is lying, and honestly, how in the world could Sutton ever call Kyle her friend after a comment like that? Diana poo-poos Sutton’s behavior, and she feels something is off with Sutton’s personality. She tells Sutton “it’s all good,” and Kyle can hardly keep her drunken head up as she watches them hug and fake makeup.

As the night wears down, Garcelle’s 14-year-old son, Jax, wanders over to where Erika is sitting to gather up the flowers from the table. Erika shouts to him, “Get the f*ck out of here!” Jax explains to Garcelle that he just got “violated for grabbing flowers,” and momma Garcelle is not gonna stand for that. She confronts Erika, and Erika tries to make nice. It’s too late for Erika — she has pushed every last button of Garcelle’s. First Oliver, then Jax. It’s too much.

The next day, Garcelle is picking up the pieces on The Real set. She reminisces with her hair and makeup artists about just how lit her birthday party was, and they all agree about how fun it was. Garcelle talks about how little she appreciates the way Erika spoke to Jax, and she claims Erika needs to figure out her “meds/cocktails.” She is hoping that Erika will apologize to Jax since she is sick of her antics.

Crystal has invited Dorit to a boxing class in hopes of supplying Dorit with the tools to defend herself. Over some stretches, Dorit explains how PK is leaving for London, and it’s all a bit triggering since the home invasion is still raw. All those emotions come flooding out of Dorit’s body as she punches, kicks, and yells throughout the class.

Kyle meets with Sutton for dinner, and they make mindless chit-chat before they get to the elephant in the room. Kyle finally brings up Garcelle’s birthday party, and Sutton schools Kyle by letting her know that she came in halfway through the conversation she was having with Diana. Kyle admits that the talk was confusing, and she apologizes for thinking that Sutton’s miscarriages were made up. Sutton makes it clear that she was attempting to relate to Diana on a deep level, and as Kyle tries to “apologize,” Sutton interrupts her left and right to drive certain points home. Kyle tells Sutton, “You’re really hard to apologize to. You don’t shut up.” Talk about a half-a*s apology on Kyle’s end, huh? Apologize and then call someone difficult?

Kyle is over the moon about her oldest daughter’s engagement. She looks forward to a close relationship with her future grandchildren, and she muses about how much her family will be growing. This idea of family is ever-present, especially during the holiday season. On Thanksgiving Day, Crystal and Garcelle are helping out at a shelter with their children, Dorit gathers with her family, and we are even treated to a Teddi cameo since she was at Kyle’s for Thanksgiving.

Later, Rinna rolls up to Diana’s house and dances around the multi-million dollar pad. Rinna talks about how she is still numb over her mom’s death, and the holidays have made it harder for her to process her passing. The subject switches to Garcelle’s party, and it’s as if Rinna knows exactly what pot she is about to stir. Diana lip-licks her way through how she believes the convo went down. She states that “Sutton did the Sutton thing” and called Diana soulless. Diana thinks that the whole thing is stupid, especially when Sutton, according to Diana, tries to “one-up” her “miscarriages.” Rinna believes that Sutton is a narcissist. Just very interesting how Diana chose to leave out the whole OTHER side of the conversation simply to make Sutton look like the villain.

Kyle has the Kemsleys over, and she talks to Dorit about staying in the area. Since the home invasion, Dorit has not felt safe in her house, but because Kyle is a close-by neighbor, Dorit believes she will stay.

Kyle reminds the group of Erika’s drunken slip up at Garcelle’s party, and when Mauricio hears what she said to Jax, he responds, “I think it’s great that she did that.” PK, Dorit, and Kyle all chuckle, and Kyle adds, “I like seeing this more relaxed side of her.” OMG. Who are these monsters? Imagine if anyone ever said f*ck off to one of Kyle’s daughters?! Kyle claims that seeing this more open and honest side of Erika is good because it is genuine behavior. Er… if that’s Erika’s true form, I am not buying what she’s selling.

Sutton thought it would be “fun” to have the ladies over to see her new house even though it’s not fully complete at this point. She is excited to show her hard work and is obviously completely delusional about fun + this group. Sheree picks up Garcelle before Sutton’s luncheon, and Garcelle fills her in on what went down at the party. Sheree nearly falls over when she hears what Erika said to Jax, but Garcelle explains that since Erika was wasted, there was no point in having that conversation with her at the party. HOWEVER, Garcelle makes it clear that at Sutton’s, she will be “setting a b*tch straight.”

Rinna is the first to arrive, looking just like David Bowie with Herman Munster Versace shoes. Erika is legit shaking in her boots that Garcelle is gonna rip her a new one for the way she spoke to her son. As well she should be! Garcelle tells the women that she wants to be clear-minded when she has the conversation with Erika, so she is watching her booze intake very carefully, something Erika should think about doing.

When Erika arrives, it’s awkward AF with Garcelle. Erika tells Garcelle she has learned a lesson that she can only have one drink, and I am sure it won’t be long before Erika breaks her own rule. Lunch is ready to be served, however, Sutton’s backyard is a muddy mess. Rinna states, “It’s like a symbol for Sutton. You’ve got this beautiful table sitting in muck.” Ouch. Rinna is throwing an absolute fit over the mud, and she even suggests Sutton’s assistant supply flip-flops and coats from Sutton’s closet. LOL at the assistant throwing out fur coats to this group like he is Oprah.

Over lunch, Dorit explains that she can’t drive because she can’t be alone. She doesn’t feel comfortable alone anymore at all, but the women explain that in time, she will be okay. As the conversation lulls, Sutton states that she did not know Diana was not coming to her luncheon since Diana never told her one way or the other. To that, Garcelle responds, “You know what I call that? RUDE.”  Boom. When Sutton says she does not like Diana’s passive-aggressive behavior, Rinna calls her out. Rinna calls Sutton a hypocrite and asks if Sutton called Diana a mother*cker and soulless. So much for that being an issue between Sutton and Diana… and for it being part of the past…