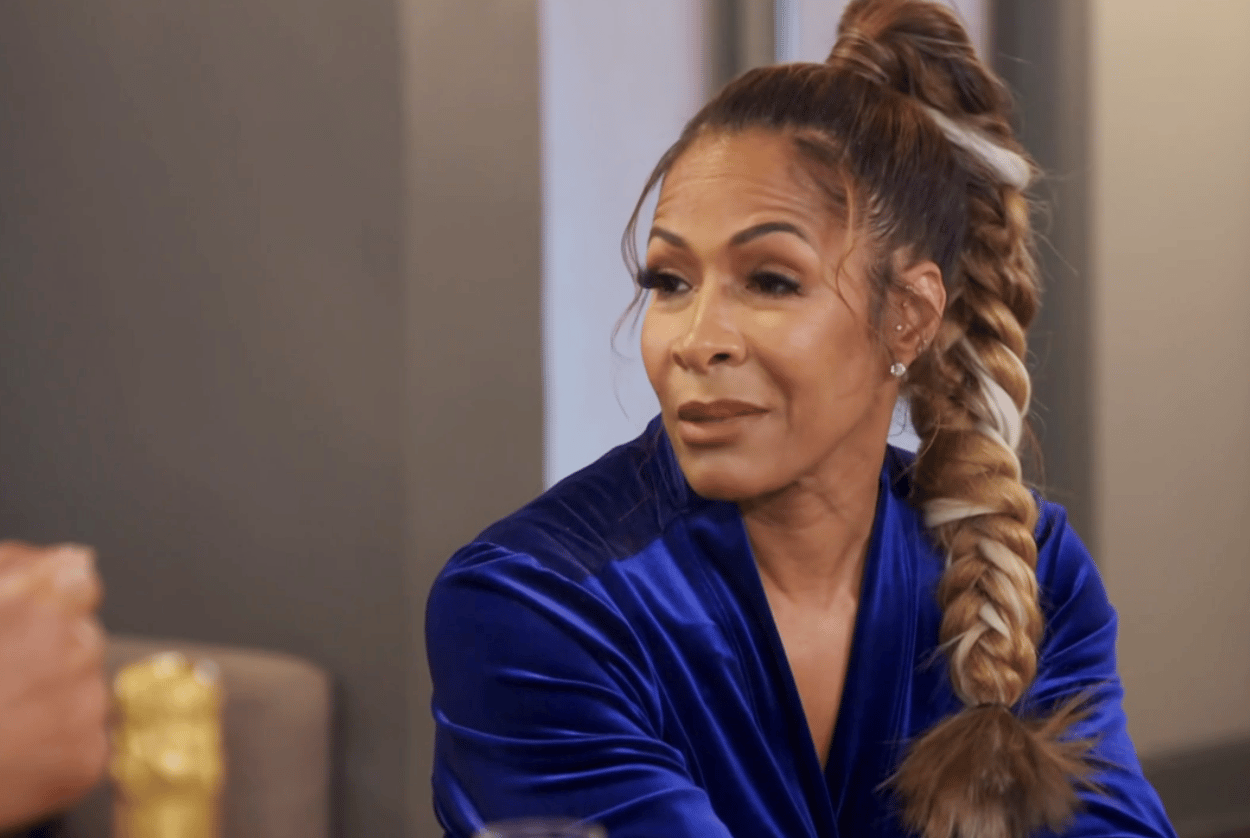 On the Real Housewives of Atlanta this week, the episode is titled, “Midnight in the Chateau of Good and Evil.” There will be a sexy pajama party complete with an OG from the past and a current one who lets her wig down for once! Grab a cocktail and let us watch the debauchery, shall we?

Sheree is watching her daughter Tierra’s podcast. It is called Kiss and Tell, and I am curious about this “landslide” sex position — just asking for a friend. During the podcast, Tierra coincidentally gets a news alert that Tyrone has spoken to the press. Sheree claims he betrayed her by selling their story and blaming her TV career for potentially taking away his freedom. Tierra tries to build her mom up and attempts to pull her mom out of the proverbial hole she has buried herself in. Side note: Sheree is a gorgeous woman who has a beautiful home and family. She is better off making an investment in herself instead of her She by Sheree line of joggers. Just saying…

Marlo is struggling with Michael and William and the way they’re shirking their responsibilities. She asks them if they need counseling since Michael has been getting referrals from his school. The boys agree they will try and do better, and I really feel for these young boys. Marlo is questioning if she is doing the right thing in how she is trying to raise these boys. She recently claimed that she does not allow the boys to watch the show unless she approves it — I am incredulous that she thinks she can stop them from watching a show that they are actually in.

Sanya visits Kenya at Moore Manor, and they seem chummy. She mentions there are challenges having her parents live with them. Sanya and Ross must have sex in closets and cars so they can have some privacy. Kandi calls Kenya while they are chatting and fills them in on the trespasser. She mentions that the security situation involved a young man who ended up getting a trespass warning for jumping the gate. Kenya cannot believe how things escalated between her and Marlo. Marlo is definitely trying to hang onto her peach while the show is airing with her speculation on where the other ladies get their money.

Sheree, in her electric blue dress, has her friend Fatum over, and she’s toting a Champagne in a Chanel bag. Sheree breaks down over her breakup with Tyrone, and she feels so f*cking stupid that she allowed Tyrone to take advantage of her. Sheree is really upset, but it seems histrionic if you ask me. Now I do believe that she regrets the time she wasted on this fool, but her crying display does not seem authentic. Fatum is glad that she is finally recognizing her value and will start dating in her pay grade.

Drew and her mom Jeanette are getting a pedicure together, which is my favorite thing to do. She shares that Ralph is drafting a book about step-parenting. Drew shares that the assistant who offered the massage is the one who had the idea for this. How many job titles does this woman have??? She would prefer that Ralph adopt her son Josiah since his own father has been absent. Jeanette plays a message from another “Prophet,” who is warning Drew about an evil spirit in her life posing as a woman. Drew automatically thinks of Sanya, who she believes is fake. Mama Jeanette thinks she needs to rebuild her village and purge herself from this evil spirit and stop taking advice from these dishonest “Prophets.”

Marlo, who looks like she forgot her pants, is shopping for her new home. Sheree and Sanya arrive to help her shop for a home that is a dirt pile in a field now. Sheree informs the other ladies that she is planning a pajama party sleepover. Marlo does not think that Kenya was behaving normally when they got into it. She thinks Kenya has a bad case of “can’t take Marlo syndrome.” Marlo then lets the ladies know that she kicked the boys out. She shares that the boys have not been listening and Michael punched a wall. Marlo’s sister, Crystal, who is a mom, took the boys in since she is allegedly better suited. In her ITM, Sheree thinks that you do not take a break from your kids. Marlo is afraid of failing the boys while they are in her care. Sanya tries to encourage her to not give up on them. Marlo is hoping after 30 days at her sister’s house, they will be more responsible.

Sheree has a fancy pajama party, and her vision is seeing the ladies in shades of nude. She wants the nude color to be reminiscent of baring it all and being vulnerable. Side note: It reminds me of the PJ Nude Interlude party from RHOP, so I was expecting Dr. Wendy to pop out and introduce us to her new body parts.

Fatum has planned to give Sheree some coochie incense. Kandi compliments Sheree on always having tasty food at her parties. Fatum has been brought into this scene since she is bringing tea about Ralph and Drew having multiple aliases. Ralph has the name Danielle as an alias — he might be the female evil spirit that Mama Jeanette was referring to! Kandi wonders how Ralph has money with no job in sight. Sheree and Drew are wearing the same pajamas. Drew needs to borrow some PJs from Sheree since Sheree wore them better.

Kenya gives Fatum credit for doing background checks since she should have done that before marrying Marc. Marlo, aka Sasquatch, arrives and finds the theme of the event to be odd. They have live models, and everyone thinks Kandi has something to do with the theme. Lisa Wu arrives at this Naked and Afraid-themed party. Kandi and Marlo make peace with each other while using the bathroom, which is an odd place to come together, but it is a place to release toxins. She is upset that Marlo has kicked the boys out, though. Marlo admits that she has been drinking more and needs some therapy to deal with the stress she is under.

While sitting at the beautifully set table, they decide to have everyone say “Yes Queen” when each of them says something positive. Drew does not understand the exercise, so no positive affirmations for her. Sheree thinks that Drew cannot give compliments since she does not get any at home. Drew claims she even loves her enemies, which is still a dig.

Kenya, who now has had five drinks according to the drink counter, is the most fun I have ever seen her. She hilariously just wants to know if her wig is on straight, but she is lucid enough to know that she needs to earn her coin and asks Drew about all the aliases. Drew now wants an apology from Fatum for what she said about Ralph. She thinks Fatum is like a stalker since she has been doing background checks on her and Ralph. Fatum tells Drew that it was her assistant that spilled this info. Drew reminds everyone that Danielle is one of her 50 assistants and a real person.

Sanya goes to interrupt OG Lisa Wu, who honestly would have been unrecognizable if production had not had her moniker on the screen. She thinks that Lisa is behaving “like this drunk auntie at the picnic,” and she wants to hear from somebody else. They then decide to get into the vagina cleansing portion of the evening… Sheree does feel a tingle while getting her coochie incensed. Fatum wants Sheree to get rid of the old energy. Is this like vagina steaming? Marlo is rightfully afraid that she might get a yeast infection, or worse, a third-degree burn on her hoo-ha. Drew finds this exercise to be like witchcraft, but she might want to smoke out her evil spirits while she has the chance! Marlo then invites everyone on a road trip to the Blue Ridge Mountains, and I have some concerns over this group being stuck in the middle of nowhere….

We then get the midseason trailer where Sheree is hopefully launching her She by Sheree line. Kandi promises there will be some smoke, and we have another cast trip, which looks promising. Let us hope the rest of the season picks up since this one has been lame. Be well, everyone, and see you next week in the ATL!