Home Below Deck Below Deck’s Rachel Hargrove Slams Austen Kroll as a “Narcissistic Twat,” Leaks Texts From Bravo as She Details Run-in and Accuses Him of Bullying, Plus Austen Reacts

Below Deck’s Rachel Hargrove Slams Austen Kroll as a “Narcissistic Twat,” Leaks Texts From Bravo as She Details Run-in and Accuses Him of Bullying, Plus Austen Reacts 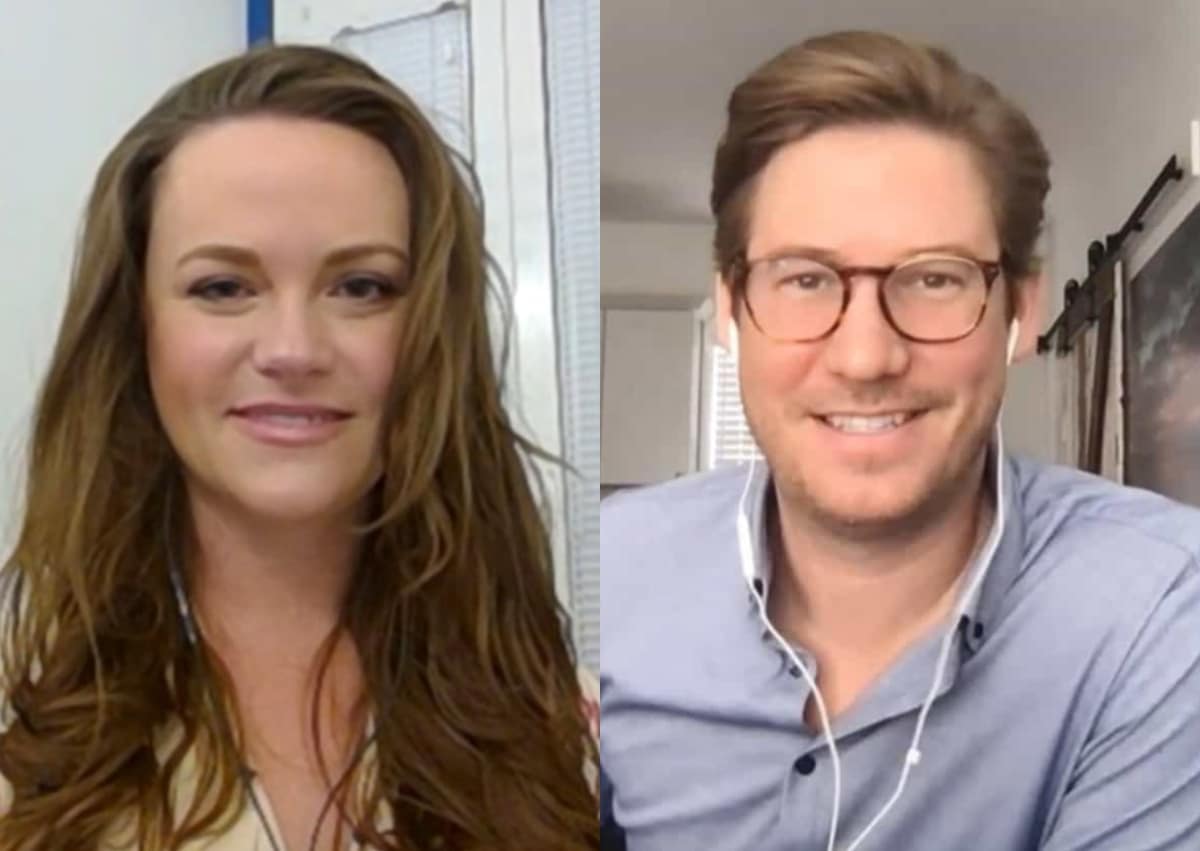 Below Deck star Chef Rachel Hargrove took to her Twitter page on Tuesday, where she took aim at Southern Charm cast member Austen Kroll while congratulating him on his beer line, Trop Hop. Her tweets got the attention of Bravo’s PR team.

As she dissed Austen on Twitter and leaked a series of messages she received from the network’s personal relations division, Rachel slammed Austen as a “drunk cokehead” while also accusing him and Shep Rose of exhibiting bullying behavior at one of Bravo’s Upfront presentations.

“Cheers to the most [narcissistic] twat on [Bravo TV],” Rachel tweeted on July 26 after seeing an article about Trop Hop. 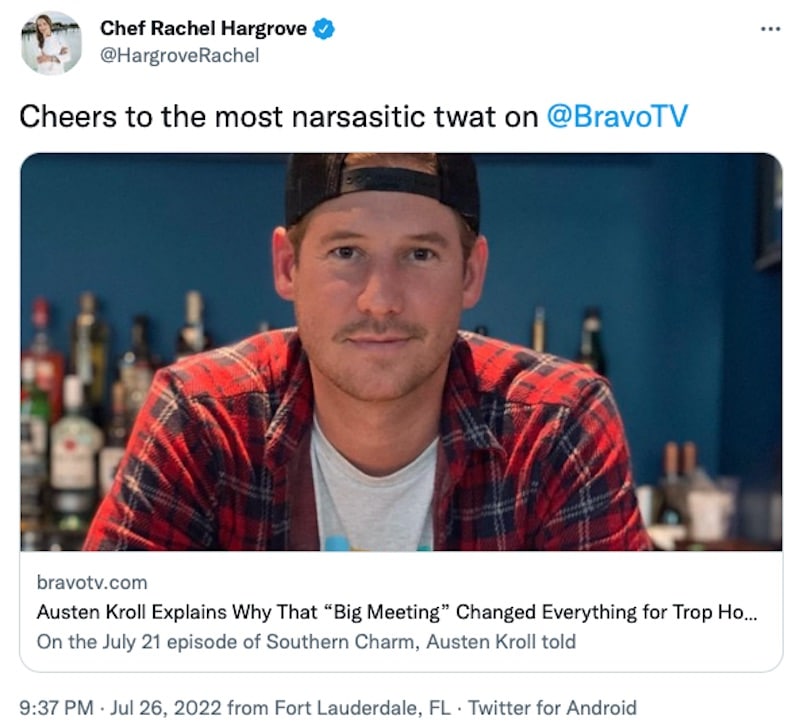 Following the post, Rachel received a message from someone with Bravo, which was later shared on Instagram, along with several others, by Bravo Breaking News.

“Hi Rachel – it’s Peyton from Bravo PR. I saw your tweet about Austen from Southern Charm and wanted to reach out. It’s not in our best interest to have you saying negative things about other shows on the network. Each show and talent should support each other or just not say anything at all,” the unnamed person had written, in part.

“Just make sure the drunk cokehead knows to not talk to me again,” Rachel replied.

Then, after they asked for “a little more context,” vowing they will “make sure he won’t say anything again,” Rachel recounted a run-in she had with Austen in Florida.

“He was in Tampa and Fort Lauderdale where I live… We met up… But what was actually good was I met his brewing team. We were all [hanging] out. He didn’t like the fact I don’t party and was doing his whole thing… being an idiot,” she recalled, adding that Austen had contacted her days later.

Rachel then said she crossed paths with Austen and Shep at the Upfront.

“Even when him and [Shep] [threw] my bag on the floor at [Upfront] while waiting to go do dress rehearsal,” she shared.

“I hear you – that’s rude and unacceptable of him. Sorry you had that experience with them. We’ll have someone speak to him too but would appreciate you removing the tweet since it was a personal incident,” the person wrote back. 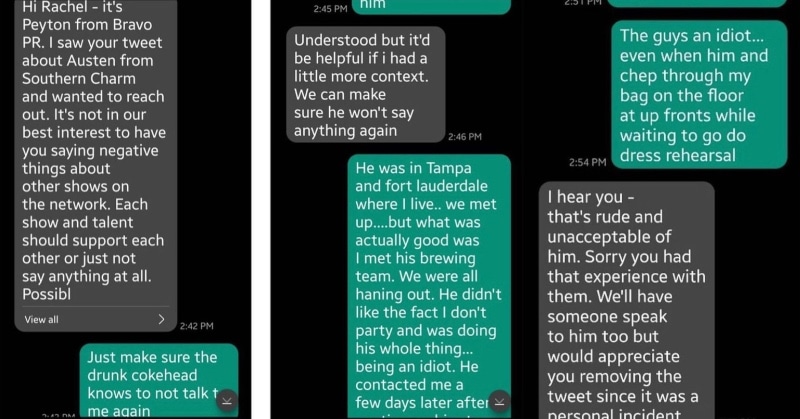 Austen also reacted to the diss himself, as seen in a leaked DM shared by Bravo Breaking News. 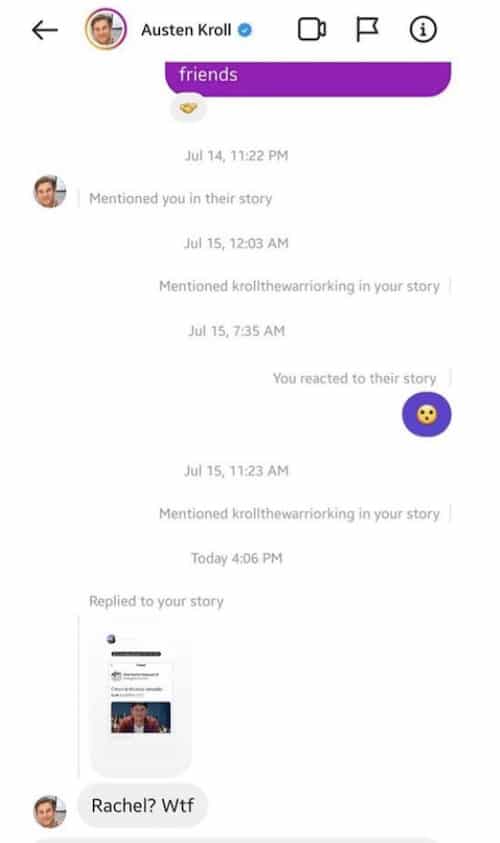 In a couple of other messages shared on Twitter, Rachel said she was “tired” of the bullsh-t and wouldn’t be attending BravoCon in October.

“I don’t sit down I stand up… I’m tired of the BS… I refuse to participate in [BravoCon],” Rachel tweeted, via Bravo and Cocktails on Instagram, also tagging Below Deck and Bravo TV. 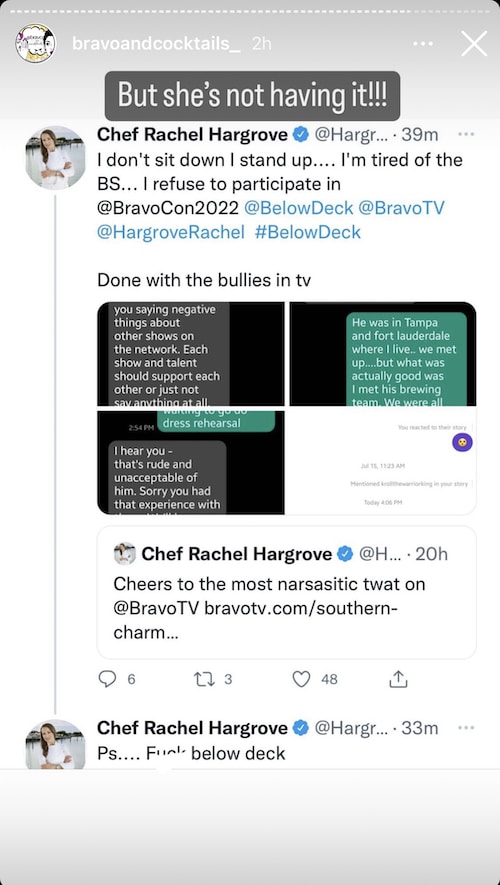