Home Real Housewives of Beverly Hills News RHOBH Recap: Lisa Lashes Out at Sutton, Tells Her F**k You Amid Fight as Sutton Confronts Erika for Calling Her a Liability

RHOBH Recap: Lisa Lashes Out at Sutton, Tells Her F**k You Amid Fight as Sutton Confronts Erika for Calling Her a Liability 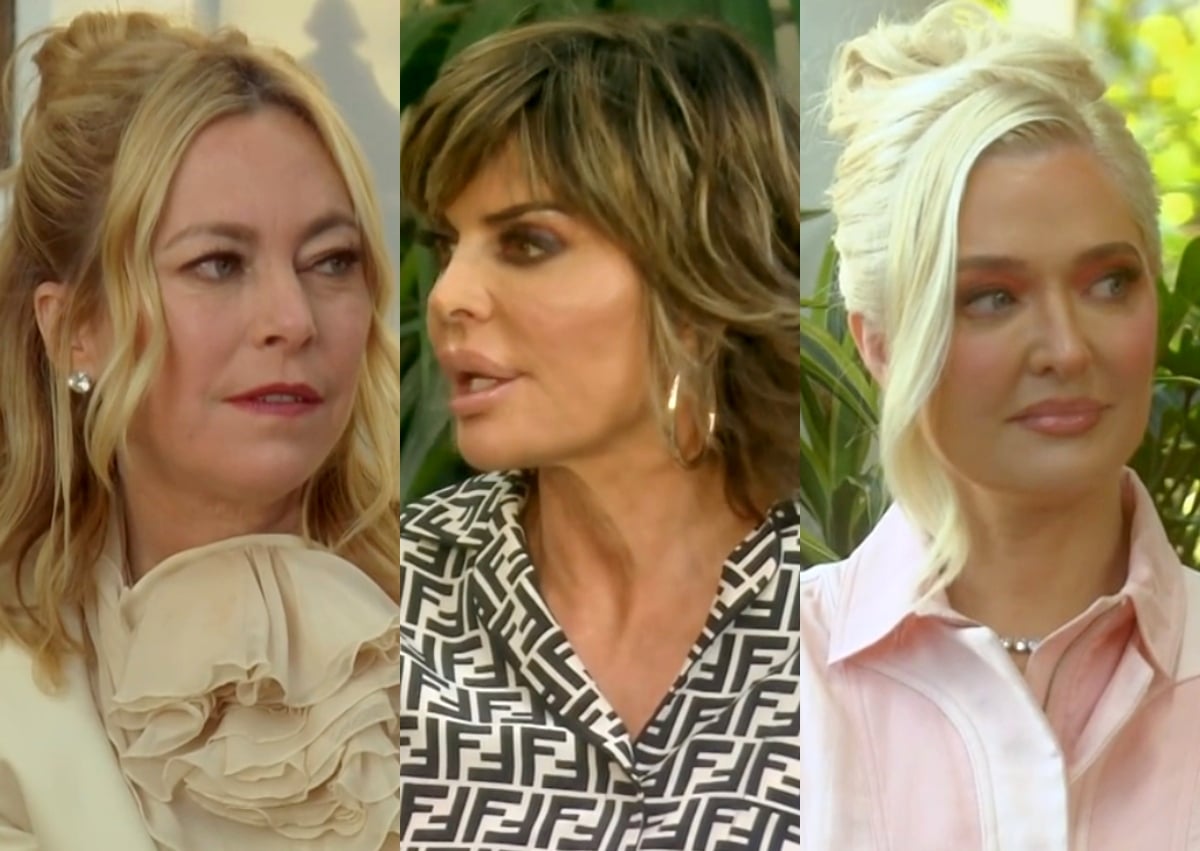 On this episode of the Real Housewives of Beverly Hills, a Rinna rose event takes a turn, proving that Rinna is *still* not over Sutton humiliating her on Watch What Happens Live. How does Sutton attempt to dodge the rage, and does Erika stay sober enough to watch this fight unravel?

Rinna is thrilled to announce that her new rose is finally ready to be unveiled, and she figures what better way than to test out at an afternoon soiree with the ladies. That is, the ones that aren’t in isolation from COVID. Kyle, Crystal, and Diana are all quarantining, but Rinna is set on this tasting since it has been such a long road to get the wine to this point.

It’s nice to know that Kyle isn’t the only housewife with misbehaving dogs: See Sutton. Sutton’s pup digs up the landscaping, and Sutton simply laughs it off.  She is just so happy to have a house full again after spending Christmas alone with COVID. Since Sutton’s children were in Italy with their father during Christmas, they are home now to catch up with their mother, and of course, to learn how to make a mean chicken salad (the secret is lotsa mayo).

Garcelle and Dorit are out for some drinks, and it is clear that they have overcome quite a few hurdles to get their relationship to where it is now. Dorit apologized for calling Garcelle a bully, and they now have a clean slate. Garcelle talks about how she is doing her audio reading of her book, which is a bit scary, especially since she is sharing stories in her book that she has never talked about… including her experience with Bill Cosby that was “scary.”

Garcelle asks Dorit about PK’s trip to the station after his drunk driving scare. Dorit shares that PK was shaken up, but there was no charges and Garcelle has even read that PK got driven home from the cops!  The topic then switches to Erika and her drinking. Garcelle tells Dorit that Erika fell and hit her head after Diana’s party, and therefore, Erika really needs to figure out her choices.

Speaking of choices, Garcelle fills Dorit in on how Erika essentially told Garcelle that being friends with Sutton is a bad choice. Erika said that Sutton is a “liability,” an interesting thing to say to Garcelle, who is a very good friend of Sutton.

A surprising lunch is underway: Rinna and Sutton.  One might’ve thought that those two would never be able to hang out and eat French fries after the WWHL debacle, but here they are today, laughing together.  However, that doesn’t mean Rinna isn’t making unnecessary digs at Sutton. Rinna straight tells Sutton that there are times that she is “infuriating” and that she “wants to strangle” her, but they’ve moved on, even though Rinna enjoys torturing Sutton from time to time. Sutton likens Rinna to the Grinch. An interesting comparison to say the least…

It’s the Rinna rose party day! Sheree rolls up and Sutton comes donning waxed denim — don’t be fooled, there will be NO ugly leather pants this time.  Erika asks for some chamomile tea even though Sheree suggests that the tequila will warm her up. Harry Hamlin personally delivers Erika’s tea and calls his house “blessed all of a sudden with pretty girls.”  Ouch to his daughters — LOL.

There’s an awkward exchange about Rinna’s blow job abilities (in case you were wondering, Harry Hamlin says she is a 10 on a scale of 1-5… eyeroll), and then Erika brings up Crystal’s eating disorder. She wonders why Crystal has yet to seek professional help, and Dorit shares that Crystal told her she is vomiting every day. This is news to the group, and Rinna cannot believe Crystal is talking about it on Instagram. Sutton jumps in and wonders if maybe Crystal IS getting help… and maybe everyone should stay out of Crystal’s business if she is not there to explain/defend herself. Touché.

Rinna believes that she is putting herself in a vulnerable position by having these women try her wine, but they are apparently thoroughly enjoying the tasting, since no one is spitting out the rose and they are getting toasted. They come to the consensus that the rose is perfection, and then Garcelle jumps in, wondering if they are gonna feed anyone here.

Over lunch, Dorit states, “Listen, G. I have a friend and he is into you.” G? Dorit is trying to set Garcelle up with a man who has been trying to date her for awhile and Erika calls that boring. Once again, she overshares that she is being “serviced” multiple times, and everyone is torn if they should tell Erika to cool it with the boozing, especially after the spiel she gave about mixing meds and alcohol.

As the women move to a different outside area of Rinna’s house (why do we never see the inside?!), Garcelle calls Erika over to have a chat. Love that when Erika questions for what, Garcelle states that Erika should just come over to her and find out.  Amazing. Garcelle gets right to it and lets Erika know that it threw her off when she called Sutton a “liability.” Erika believes that Garcelle does not need to stick up for Sutton. Garcelle suggests they invite Sutton into this conversation, but Erika does not want her to enter. Erika cannot fathom how much slack she cuts for Sutton and believes that Garcelle would not go as hard to defend her as she does Sutton. Erika claims that she has done nothing to Garcelle, and yet, Garcelle continues to be judgmental towards her.

When they rejoin the rest of the group, Sutton wastes no time and straight up tells Erika that she does not like to be called a “liability.” Erika doesn’t back down and tells Sutton that Garcelle always must clean up and support/defend her. Garcelle wonders why being a loyal friend is a bad thing, and Erika clarifies that Sutton goes tit for tat, and Sutton tries to “embarrass and hurt” people.

Rinna jumps in and reminds Sutton that she deliberately meant to hurt her and Harry when she went on WWHL. Wait — why are we going back in time and beating a dead horse?! And didn’t Rinna JUST say over lunch with Sutton that they have moved on? Also, it’s SO interesting that when Rinna hops in to defend Erika, it’s ok, but when Garcelle does that for Sutton it’s a liability.

Not sure Rinna is hurt by Sutton blowing up her spot on live TV, but I believe she is embarrassed to be called out for the truth (hello, receipts!). Sutton reminds Rinna that “you’re very funny because our lunch went very differently.” Sutton insinuates that she knew Rinna would act differently when she had an audience, and ya better believe Rinna is living up that.

Sutton tells Rinna, “I can’t help you forgive me,” and Rinna mocks Sutton’s accent. Rinna admits that she has been running around talking mad sh*t about Sutton and states that she wanted to “drag” Sutton for what she did to her and her family.  Rinna then completely loses it and slurs to Sutton, “F*ck you. Get out of my house. If you’re gonna talk like this, you should just leave. Come after me as much as you want, but don’t bring up my children or my husband. If you come for my husband and kids I will f*cking cut you down.” Erika is LOVING this exchange, and Sutton apologizes yet again for “humiliating” Rinna. This is a typical case of projection for Rinna, and note to self, evidently, Rinna rose makes you a lunatic!