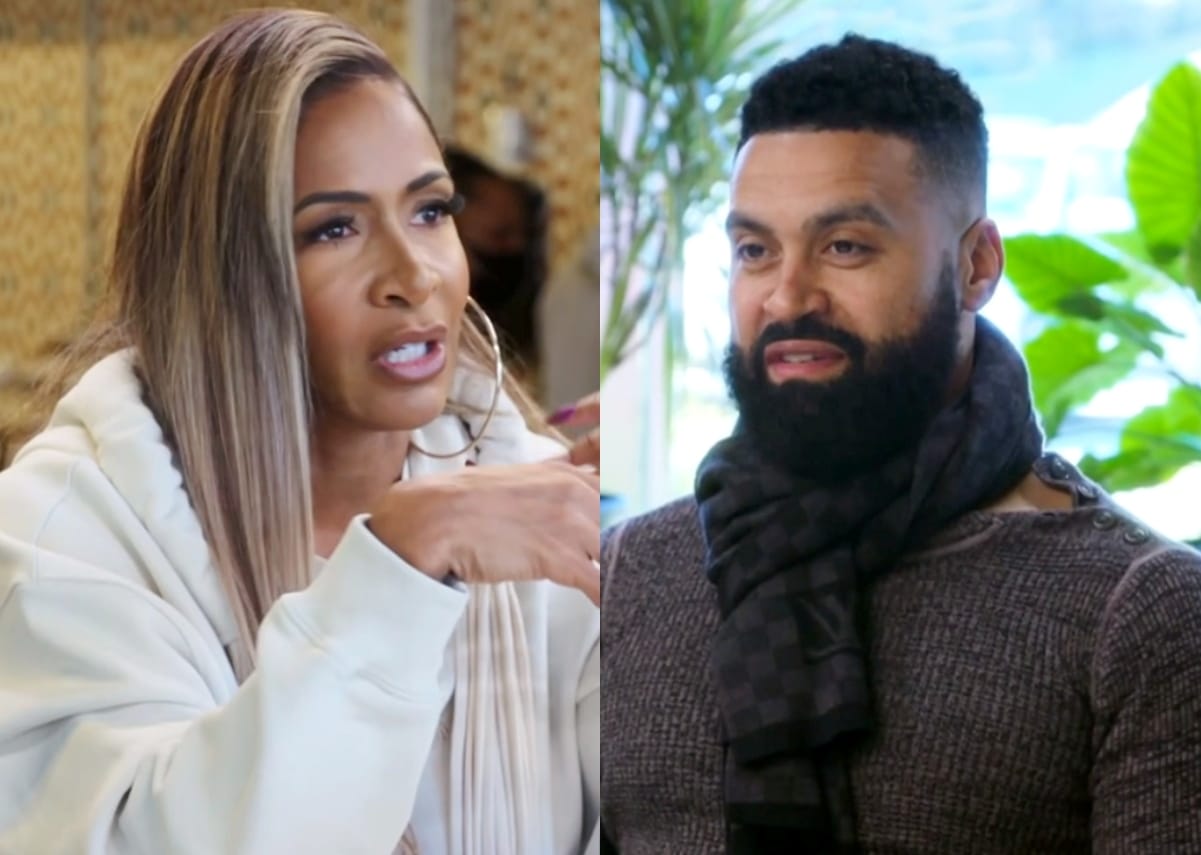 The title of this week’s episode of the Real Housewives of Atlanta is “It’s Expensive to Be She.” Sheree is slowly leading us into her fashion demise. We do have a surprise visitor at the end of the episode, so please, please hang in there for me.

Kandi is working with Ace so he can be the next actor in the family. Ace has been auditioning for some roles, and Kandi thinks it is time for him to have some professional training. He is so precious trying to run through his lines, and Kandi seems like a proud mama when he gets the lines right. Kandi is making her next generation be as successful and driven as her.

Marlo gets a SOS call from her sister Crystal about the boys returning home. Crystal says they are not helping around the house, and you can clearly see this poor woman is frazzled and overwhelmed. She is happy to be sending them back to Marlo so she can get a break. Marlo, who is nonplussed by her sister’s distress while sipping on her wine, is planning to see a therapist to help her with the boys’ transition to home. She is really trying to do some damage control after giving her nephews away, IMO.

Drew and Ralph are home while their personal chef prepares them dinner. She is recovering from her surgery, and she is sad that she missed most of the Jamaica trip. Sheree comes over to check on Drew after her Achilles surgery, which ended up giving her a lot of stitches. She is the first friend/archnemesis to visit. Sanya comes over, and it is ironic how these two are the ones who are checking on her. She is saddened that Drew got hurt while she was in Jamaica. Sanya admits that Kenya ate her up in Jamaica and spit her out like a dry piece of oxtail. Drew is surprised that her BFF Marlo has not come, and Drew thinks she is hallucinating since these two are the only ones willing to film with her.

Sanya then decides to call Kenya to chat about her calling Ross “aggressive” in Jamaica. Kenya does not want to talk to her since she is not fully awake on her snark game yet. She denies that she used the word aggressive, which we all know she said. Drew is so bored by this storyline — as are we — that she falls asleep and starts snoring.

Sheree is working with Rawan, who is her last chance to pull off a fashion show, and they are screening models for the show. Kenya, who can be super shady, is going to be giving her advice for the show. They are casting for this event on the down low, which makes no sense. Kenya is concerned that this laid-back attitude is not going to work. She shares that you need a real budget to get real models, and Sheree claims she already spent one million dollars. Kenya super shadily says that payment was to collection agencies.

Kenya starts taking over the show, and Rawan is highly annoyed that she keeps interjecting her opinion. Sheree starts having the male models come out, and she shares that the ladies like to crotch-watch, so this is a good distraction since there will be little fashion but big packages in this show. Kenya is insolent to Rawan and tells her this looks like her first rodeo and is destined to be an epic failure. Rawan gives it right back to her and tells her shady comments rain down on her like confetti!

Ralph is having his book’s cover shoot, and his blue suit reminds me of a zoot suit. Drew still has not even read the book, which makes it highly suspect it is 75% finished. She talks about a surprise birthday party for Kenya and Marlo. Drew is leading them to believe that they are celebrating her recovery. Ralph shares with Pastor Jeanette that he is taking Josiah’s dad’s feelings into account and wants Josiah to ask him to adopt him. Pastor Jeanette is clearly not happy that he is not making a commitment to Josiah.

Marlo finally has the boys at home, and she hired a tutor/assistant. She lets them know that they need to get good grades and do their chores before they get their phones back. Michael and William are happy to be home, and they missed having a clean bed, even though it has a green velour headboard.

Drew and Sheree are planning a surprise birthday party for Marlo and Kenya together. She is expecting Sheree to kick in half of these costs, which now total $2,700. Sheree does not want to pay half since “the b*tch ain’t that bright!” She is unfortunately being true to her reputation and not paying her fair share.

Sheree then gets a call about her product samples, and they are allegedly stuck in transit. She is afraid she is going to be in another embarrassing situation. Sheree’s samples are stuck in Alaska and literally frozen in time. Kandi is stunned that she cannot pull this together after all of these years. She has been too busy taking Tyrone’s calls from the pokey and not working on her fashion line.

Drew has invited friends and families of both ladies to the party. Kenya goes in the front door and sees the wildebeest Marlo behind her, and she promptly shuts the door in her face. She is already going to make this evening contentious. Kenya is annoyed that she must share her party with someone who has the brain of a gnat.

Marlo’s Friend Match BFF talks about how special Marlo is and reminds her to not fight with Kenya. Drew announces that this is their gift for their birthday and hopes these two can play nice. Kenya sees this party as an intervention. She admits she liked Marlo in the beginning, but she found she had to give her too many chances. Kenya cannot forgive her for the comment about her mom not wanting her. Marlo drones on about Kenya cutting her so many times, and production gives up a lot of examples. Pastor Jeanette needs to do an exorcism to clear the bad energy at this table.

Drew decides to fan the flames and thinks it is a clever idea to play a game called “Below the Belt.” Sanya hears the arrogant comment and tells Kenya that she wishes that she had a man like Ross who would stand up for her. Sheree brings personal invitations to the fashion show. Kandi wants to know how she could spend all that money for the little outfits on her invite but cannot get a sample outfit. Sheree needs more than prayers to help this fashion show take off, and she should be looking into a market for a Barbie doll jogger fashion line. Kenya then shares that the model selection process was a nightmare. Sheree blatantly lies and says that it cost one million to put this show on. The other ladies seem like they really want to help her to pull this off, but Sheree will not accept help from them.

The final scene, which is a doozie, has Apollo waltzing in, and his moniker calls him Sheree’s friend. This scene was his chance to go off on cold-hearted Phaedra and vent about how she left him when times get tough. Sheree acts coquettishly with him and pretends like they were good friends who just lost contact since he was incarcerated. Apollo does give her some good insight into Tyrone’s behavior. He lets her know that the men in there usually have a few ladies they use to just pass the time while locked up. Apollo shares how the men talk about all the women that they are playing. Sheree, who definitely has a type, thinks having Apollo in her show would be dope since he has done some modeling before.

Sheree lets Apollo know how Tyrone ghosted her and how humiliating it was. Tyrone has been calling and texting her , and she is worried that he will bring her more bad energy. Next week, we have the fashion show without any fashion, and Tyrone shows up. See you all next week when we watch Sheree’s fashion dream turn into a nightmare! Have a great week, Blurbers!