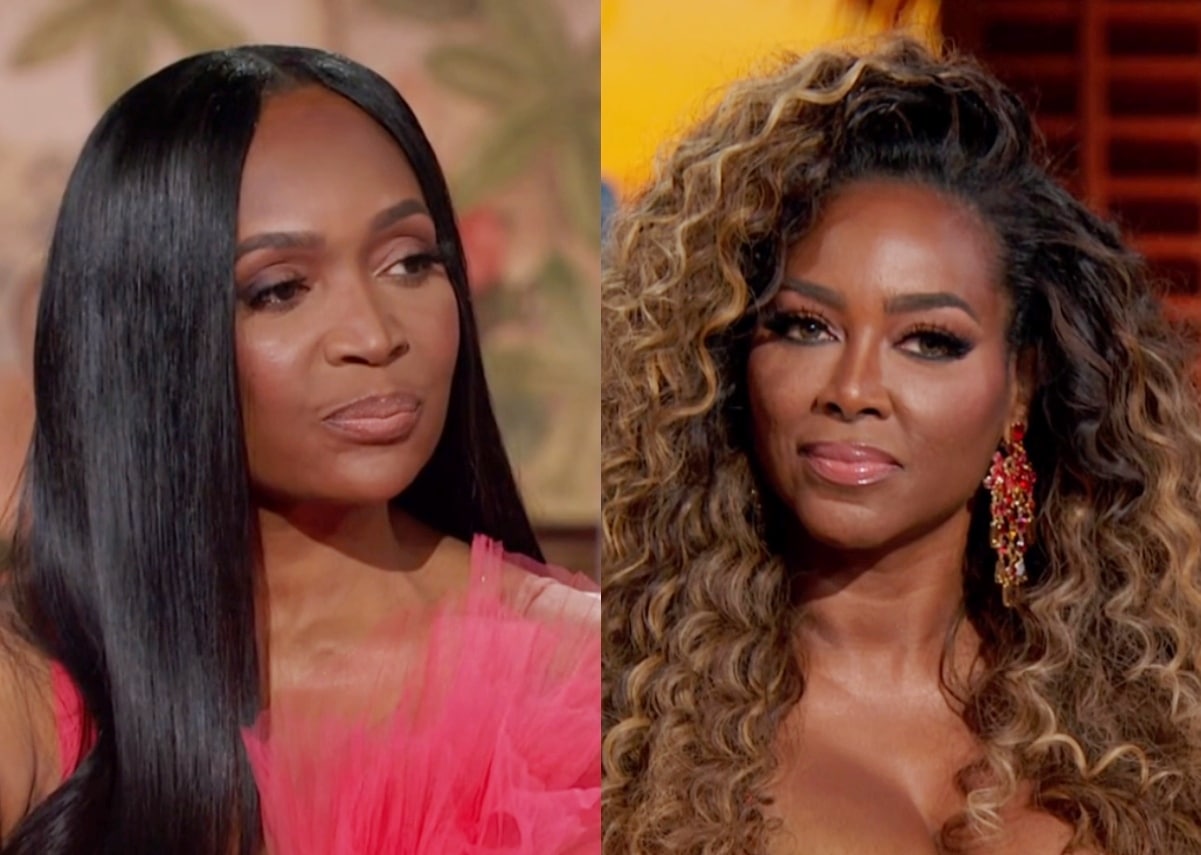 We are back from last week’s episode for more Marlo-drama in the Real Housewives of Atlanta. Production will have to resort to having people call in at the end of the episode out of pure desperation. Please take a huge gulp of your libation, and preferably not peach tea!

Marlo is defending her unruly behavior this season, and she reminds this group that no one could survive the life she did. She acts like she is a truth-teller, and she thanks Sanya and Drew for supporting her. Kenya does not believe her actions match her words. She believes her to be hypocritical, and she even intimated that Kandi’s p*ssy was not good. Marlo made the biggest mistake by breaking off the olive branch that Kandi extended her. Sanya throws in a Hail Mary pass, and she even defends Marlo and claims she is a good friend. Drew, who is not the best judge of character, finds Marlo to be a consistent friend. WTF does that even mean? Consistently malevolent? Side note: IMO Andy likes Marlo and has allowed her to use these two episodes to redeem herself. It is a little too late after this nasty season played out.

Marlo describes the break-in at her home while the boys were home. She threatened the intruders, and thankfully, they departed the scene quickly. Kenya would have appreciated a heads-up so they could be prepared because they are all on the same platform. She thought they could have benefited from getting details on the incident. Marlo says that she’s apprehensive to share personal information with the ladies because of their perception of her sources of income. She asks them to offer up some names of the men she is accused of whoring around with. Crickets — no one wants to get slashed!

Andy describes the negative viewer feedback about the boys being kicked out. He finds her life story to be really moving and found this action shocking. Marlo felt she lost control of her house because she was too permissive. Kandi saw a kind side of her giving the boys what Marlo was lacking in her childhood. She found it troubling that she reacted to their behavior the way she did instead of trying to understand it. Marlo attributes it to not getting classes on child rearing like a foster parent would. She bizarrely thinks that you should spoil foster girls more than her own nephews because they are boys.

Andy reflects on the phone call with Marlo’s sister and how traumatizing it had to be for those boys. He commends her on how she dealt with that sad situation. Marlo then pivots when Andy is trying to throw her a redemption bone, and she spits it out and insults Kenya. Marlo thinks that Kenya is not capable of being kind to her — since hurt people hurt others.

RHOA production has been producing receipts this season, and they have been checking them and double-checking them. Production has even made a short film on Ralph‘s master class on gaslighting techniques. Drew recognizes that she got caught by production this season with her tall tales. She showed all season that she clearly does not know everything about Ralph. Andy then asks Marlo if her edges are improving, which I find to be weird. Marlo admits to using Kenya’s haircare products, and they are helping her edges grow in better.

Kenya’s season of trying to show us she is the moment now is profiled. She was a lot more fun this season than in past seasons. Kenya’s comments about Ross being aggressive are brought up as well. She admits that he had no malice and finds him to be kind. Kenya does not regret hanging up on Sanya over the couples’ comment. She admits if she had pulled that with her grandmother, she would have been dragged big time. Kandi thinks Kenya had good things going on with DWTS and that carried into her season. Kenya is still not divorced, and it is not about money. She must be fighting over Brooklyn, then. Kenya shares that she has been group dating but nothing serious.

Andy questions Kenya and Sheree about their annoyance with Sanya and not going to her iFit shoot. Sheree gets called out on her comment about Kenya being aggressive because Sanya needed to know how to manage her. She then gets a phone call from Martel, and Andy jumps out of his seat to look at him. Andy thinks he is a 10 out of 10. Kenya shares that his D is also part of the BIG 10. She then gets asked about John in Jamaica but will not elaborate. Kenya shares that guys are chasing her down and she is still on a high.

Sanya defends the way Ross stood up for her at the dinner. Kenya admits that Ross is a good guy, and she now admits he did not curse at her. Andy calls Kenya out on the party game that was held at Brooklyn’s party. She pretends that she thought this group would have kept it light?!? Sheree gets called out for saying Kandi sucks D everywhere. Andy wants to know who wrote it, and no one will own it, but I think it was Sheree!

Sanya’s season is now profiled, and Andy asks if she is on the same page as her husband. She enjoyed her first season, but she thinks being a Housewife is so much harder. Sanya felt being an Olympiad was more in her wheelhouse. She is still trying to get pregnant and feels Ross is listening to her now. Drew gets called out on telling Sanya to have a baby to make her husband happy. Who goes to Drew for marital advice? OMG, move this conversation forward for god’s sake!

Marlo and Kenya’s seasons are shown and how they tore each other up all season. She thinks that Kenya dismisses her when she does not need her. Marlo acknowledges that she did go low on the mother comment. She admits their frenemy days are over, and then, Kenya calls Marlo a sociopath. Kenya lets us know that Marlo’s real name is LaToya Hutchinson, which is on her arrest record. She reminds us that Marlo has a square reader between her legs. Kenya thinks that Marlo has dragged everyone on this show plus her own family. She does not hold anyone harmless but leaves out the fact that she had been in jail herself. Kenya shares that Marlo slashed a woman’s face, and Andy must move this on or there is going to be a scrap on this stage.

Andy wants to know more about Marlo’s arrest history, and she attributes it to her upbringing. Marlo admits to some violations, and she has not broken the law since her 20s. She will only own up to writing a bad check to the college she attended in Florida. Andy clearly likes his felonious Housewives even if they are rotten and poison the barrel.

Sheree gets questioned about her former assistant, Anthony, who told Drew that she does not pay her people. She should go on DWTS since that woman knows how to dance around a question without EVER answering it! Andy asks Sheree if she did confront Anthony and he denied saying it. Drew gets asked about the shade that he said about her family. She plays it off and claims not to care. Drew does care about Fatum and how she went in on her this season. She also defends having all her assistants, and she claims to pay them. Drew plays a recording of Anthony denying his comment about Ralph. Sheree then calls Anthony, and he admits he is an attention whore lied. Anthony says that his input was to give Drew a storyline this season! Andy clearly does not like this being disclosed, and we are thankfully at the end of part two. Why did Bravo think we needed three episodes of this drivel???

Next week, the men join the ladies, and we can put season 14 to bed. Hopefully, the rotten peaches will drop off the RHOA tree and season 15 will be better! Have a wonderful week, and be well!