Home Real Housewives of Beverly Hills News RHOBH Recap: Lisa Shares What Kathy Said During Alleged ‘Psychotic Break,’ Tells Her She Has a Black Heart and Needs to Get Help, Plus Kathy Apologizes to Kyle

RHOBH Recap: Lisa Shares What Kathy Said During Alleged ‘Psychotic Break,’ Tells Her She Has a Black Heart and Needs to Get Help, Plus Kathy Apologizes to Kyle 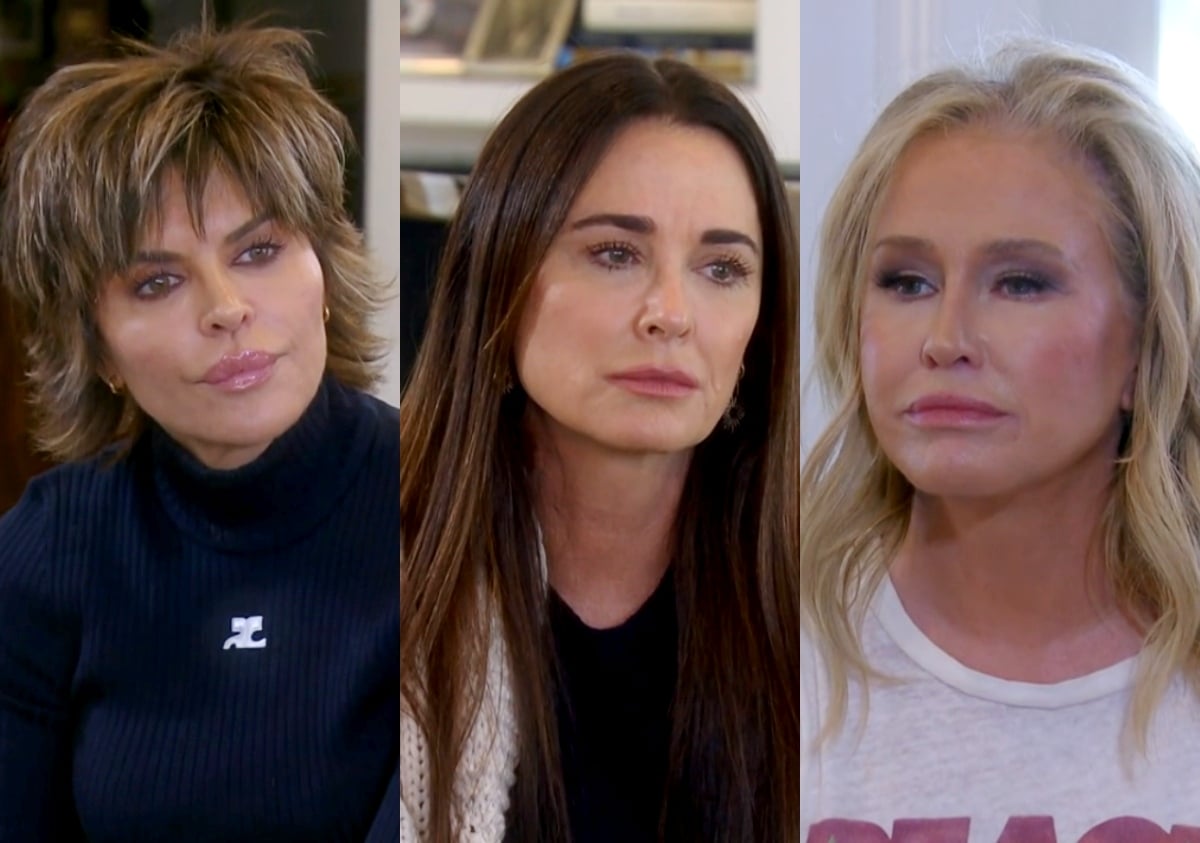 On this episode of the Real Housewives of Beverly Hills, the Kathy drama continues to unfold as Rinna sits back smugly, watching it all. Will the truth ever come out, and who should we really believe??

Dorit phones “Aunty Kyle” since she is off filming for Halloween. Dorit gives Kyle the 411 on Crystal‘s party and the ugly turn it took (courtesy of sh*t stirrer Rinna). Rinna evidently wasted no time to let Kyle know that the majority of the nasty things Kathy said mid-meltdown were about Kyle, and now Kyle is worried that her relationship with Kathy is going to head downhill… yet again.

Erika sits down to chat with her psychotherapist in hopes of moving on from her past as she settles into and accepts her new life. Erika is told that she is going through a “grieving process” since she was married to someone that she did not know truly know. Erika reminisces about the “old” Tom — ya know, the one who would buy her Cartier rings. But she also states that Tom could “flip on you and it was really ugly.” Erika, apparently, needs to learn acceptance and that not all are rooting for her. Erika reminds the psychotherapist that she was harmed by Tom’s actions as well, and isn’t it interesting that Erika is hoping for some sympathy –the exact thing she refuses to give to those victims??

Erika is getting glammed up for her Pretty Mess Hair pop-up shop. She tells a seemingly planted reporter that everything is “not honky dory” with Kathy. It is clear that Erika knows she is sitting on something hot and is playing the game perfectly. For the event, Erika has decided to invite the ladies and their stylists, and even Sutton shows up to support Erika. Sutton wants Erika to rebuild her brand and her life and wants those hopes to actually rub off on Erika.

The women talk about their husband preferences, and Dorit shares that PK would love to see her doing the dishes in high heels (as if Dorit washes dishes!!). The chat gets broken up by Elton John, who FaceTimes his old pal, Diana. Elton calls Diana “the best” (sooo he truly doesn’t know her), and then we are graced with Rinna and Dorit dragging out the Kathy drama.

Dorit touches bases with Rinna (in her “one of a kind Tom Ford denim jumpsuit) and gets her temperature on the whole situation. Rinna claims she doesn’t know what to do about the whole Kathy situation, and Dorit shares that Kathy called her. According to Dorit, Kathy said her behavior was wrong and she was apologetic, but Rinna has yet to receive an apology. Rinna then shares that Kathy tried to “silence” her. Kathy ended the text with “silence is golden and I am staying silent” (after spelling “no bueno” incorrectly). Dorit says she told Kathy that she can’t run from this issue and that her Instagram Live was full of lies. Dorit further tells Rinna that Kathy took ownership for lying once again.

Rinna then drags Dorit over to the group and sets her up to talk in true Rinna fashion. Dorit takes the bait and explains how Kathy was not herself on the infamous night in the Aspen club. Evidently, the DJ would not play “Billie Jean” by Michael Jackson and that set her off.

Sheree helps the ladies put some puzzle pieces together when she tells how she saw Kathy earlier outside of the hat shop very angry, almost shaking. Rinna believes that ordering Kendall Jenner’s tequila is what set Kathy off because “Kathy is so f*cking jealous of the Kardashians.” Rinna talks about how Kathy spoke about blood (Kyle), but also about allllll the other ladies. Rinna plays the “I know something you don’t know” card, but during her confessional, she TELLS IT ALL, up to and including how Kathy said she planned on ruining Kyle.

During her confessional, Crystal states that she believes Kathy, but that doesn’t stop the rest of the ladies from wondering where Kathy is for the Pretty Mess event. Crystal shares that she spoke to Kathy yesterday, and she said she was coming and planning to apologize. Rinna claims she is sending Kathy “blessings and prayers” since she thinks Kathy really needs them… I didn’t realize Rinna was such a religious person!

Kyle is back from filming, so her sis, Kathy, pays her a visit donning a “peace” shirt (foreshadowing?). This is the first time Kyle is seeing Kathy since Aspen, and there has been no conversation about what occurred yet. Kyle explains that making peace with Kathy isn’t as easy as it sounds — cue the past season’s footage — but Kathy comes walking in with an apology. She states that she started “ranting and venting” her feelings, and she says that Kyle makes her feel a little insecure. Kyle shuts that down right away since she doesn’t believe that SHE should be the one made in the wrong in this situation.

Kyle reminds Kathy that she was in a “mood” that night and she was hurt and embarrassed by Kathy’s behavior. Kathy gives a list of excuses for her antics, but she owns it and says she is sorry. Kyle drags this on (AFTER the apology) and tearfully explains that she doesn’t feel like she has a lot of support from her sisters.

Kathy reminds Kyle that she has to make some time for her family, and Kyle claps back by saying, “If someone hurts me, I have to keep them at arms’ length, blood included.” When Kathy tells Kyle she is impossible to get in touch with, Kyle tells her that sometimes she does avoid her calls because all Kathy does is rant and never asks about her life. Kathy tells Kyle she is very proud of her, says all the right things, and manages to snag a hug out of Kyle at the end of the scene. This exchange leaves Kyle wondering what she should believe since this behavior completely contradicts what apparently went down in Aspen. Kyle shares that Rinna is coming to her house in a little while, and if Kathy would like, she can hang around to discuss the issues at hand.

Sutton has invited Erika to her home for a one-on-one lunch. She is serving Popeye’s on silver, and she is ready to stop all the fighting. The ladies toast, and they claim they are just tired of being enemies. Sutton does ask Erika to quit lashing out at people, and Sutton realizes that Erika’s trigger word is “victim.” Sutton suggests Erika add some compassion in her voice, and to that, Erika states she would like some compassion, too. Sigh. At least they can agree to like each other…

Rinna arrives at Kyle’s, and when she enters, Kathy tells Rinna right away that she apologized to Kyle. She further says that she feels bad for venting on Rinna and states that she said things she should not have said. Kathy says she is sorry and Rinna comes back with, “I was really shook.” Rinna whisper-talks to Kathy and questions what made Kathy get to THAT place. She tells Kathy she needs to take responsibility for what she said and tells Kathy that she needs some help. Rinna wonders if Kathy is trying to shut her up again, and Kathy tells Rinna that she feels Rinna can be very “unkind, too.” Boom.

Rinna reminds Kathy that this is not about her. Kathy becomes emotional talking about a friend of hers that is dying from terminal cancer and can hardly get the words out. She reminds Kyle and Rinna that she doesn’t normally behave the way she did in Aspen and begs for some compassion. To that, Rinna retorts, “I’m sorry, Kathy. You’re not gonna get away with it.”

Rinna refuses to be gaslit and reminds Kathy that she locked herself in the bedroom because Kathy was having a psychotic break of some kind. This sounds a bit dramatic to me, and Kathy remembers how Rinna got physical with Kim.

Rinna tells Kathy, “You are f*cking angry at this beautiful sister of yours,” and Kathy continues to apologize. Kyle FINALLY speaks up, but Rinna demands to know why Kathy has a “black heart.” To that, Kathy is done.  And I don’t blame her. Rinna believes that Kathy needs to do some soul searching… hello pot, meet kettle!!