The credibility of Lisa Rinna has been called into the question by certain cast members on Real Housewives of Beverly Hills after the actress claimed Kathy Hilton made threatening remarks during an Aspen meltdown.

Since the episode aired, Kathy hinted Lisa made it up to save her job. Then, on a preview of the season 12 reunion, Kathy called her co-star the “biggest bully in Hollywood.”

After watching the clip, Lisa took to Instagram and addressed the insult while appearing to make a joke out of it.

“The biggest bully in Hollywood,” wrote Lisa on October 7, seemingly mocking Kathy’s words. “And everyone knows it.”

She then posted a photo of herself as an M&M.

Castmate Erika Jayne, her biggest ally on the show, responded to the post with a thinking-face emoji.

Kathy wasn’t the only one to question Lisa’s version of events. On a recent episode of Watch What Happens Live, Lisa’s friend Rebecca Romijn expressed, “I sometimes can’t tell if [Lisa]’s exaggerating certain things,” adding, “I don’t know about the Kathy Hilton meltdown, and her take on that.”

On Instagram, Lisa clapped back at her friend’s statements.

“Good or bad my mom always said as long as they spell your name right it’s all good,” Lisa commented on a video of the clip. “Everybody’s talking about me what can I say lol.”

She then declared: “And btw I tell the truth I always have, I don’t lie. You guys knows that.” 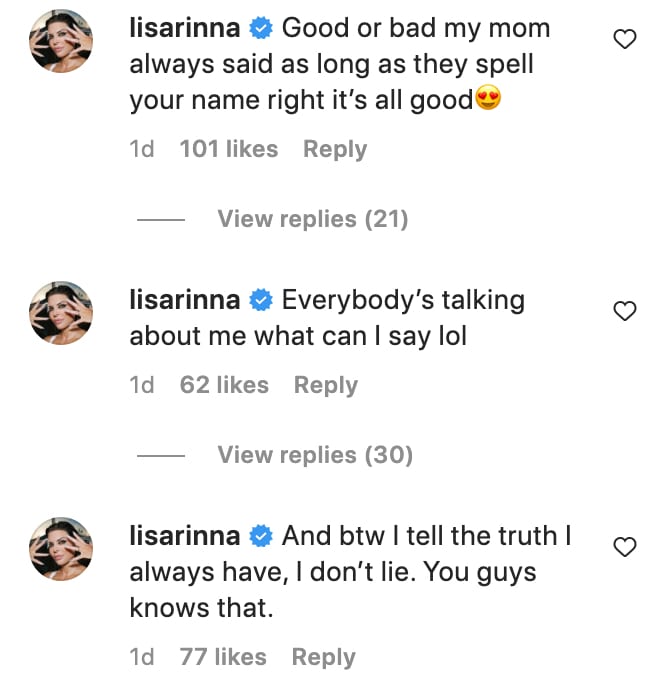 Image credit: @lisarinna/Instagram via All About TRH

Despite Lisa’s claims, many fans believe Kathy’s side of the story and are excited for the shady reunion.

Some viewers claim Lisa has a history of meddling with the Richards sisters. Back when she first joined the show, Lisa went after Kathy’s sister Kim, drawing attention to her alleged substance abuse.