Home Real Housewives of New Jersey News Luis Ruelas Shades Joe and Melissa Gorga For Making Teresa Look Like a “Liar” After Producer Says Gorgas Joined RHONJ Behind Her Back, as He and Teresa Unfollow Them on IG

Luis Ruelas Shades Joe and Melissa Gorga For Making Teresa Look Like a “Liar” After Producer Says Gorgas Joined RHONJ Behind Her Back, as He and Teresa Unfollow Them on IG

Luis Ruelas celebrated Teresa Giudice‘s vindication over the weekend after learning former Real Housewives of New Jersey producer Carlos King revealed that Teresa’s brother, Joe Gorga, and wife, Melissa Gorga, did, in fact, join the show behind his wife’s back years ago.

After coming across an article on Instagram about Carlos’ revelation, Luis took to the comments section of the post to slam the Gorgas for their “lies” and “false narratives” as he and Teresa unfollowed her brother and sister-in-law on Instagram.

“I’ve been quiet long enough… It’s saddening watching these [truths] continue to dismantle this [family’s] structure to a point of no return – a decade of lies [and] false narratives against my wife. Thank you for shining the light on the truth [Carlos King] for setting the record straight and telling the truth,” Luis wrote, as seen in a screenshot shared by All About the Real Housewives on Instagram.

“My wife was made to look like a liar for the past 10 years,” he added, along with the “vindicated” hashtag. 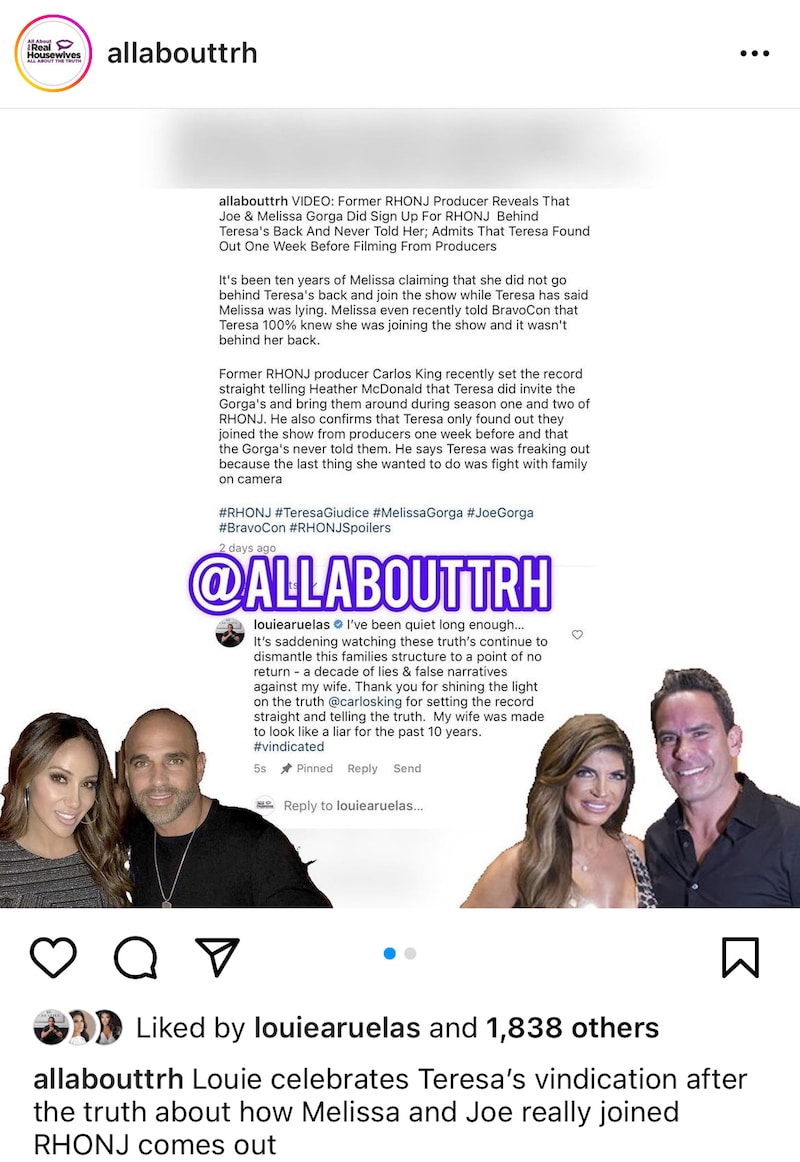 As RHONJ fans may have heard, Carlos recently appeared on Heather McDonald‘s podcast, where he confirmed that after inviting the Gorgas around the cameras amid the first two seasons of the show, Teresa was completely surprised by their addition to the show’s third season just one week before production began. He also said that when Teresa did find out, she found out from producers — not Joe and Melissa.

In addition to speaking out against the Gorgas, Luis, as well as Teresa, also unfollowed the couple on Instagram.

“Teresa Giudice [and] Luis Ruelas have unfollowed Melissa [and] Joe on Instagram following an exchange of insults at BravoCon last week!” revealed Bravo Housewives on Instagram, sharing a couple of screenshots from All About the Real Housewives. 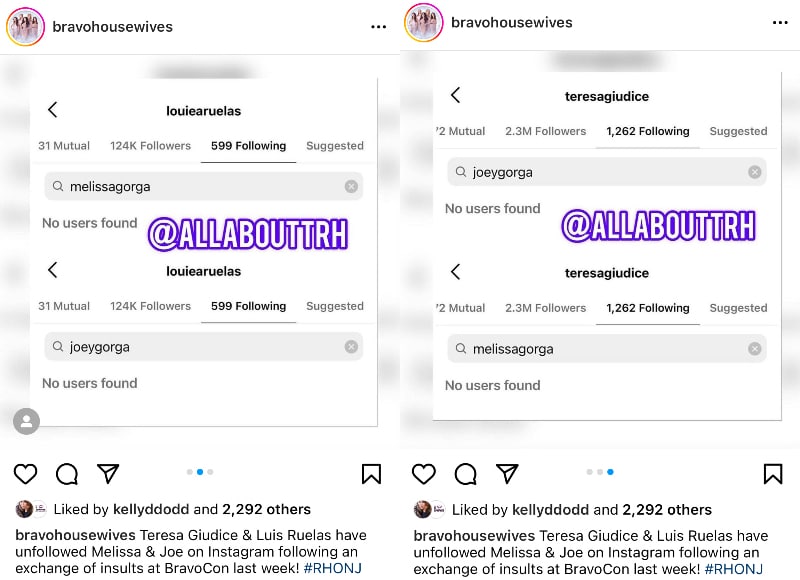 While appearing at BravoCon last week, Teresa said that while she is hopeful for a future reconciliation with Joe and Melissa, she needs some “rest” from their drama.

“I need time to heal,” she told Entertainment Tonight.

Meanwhile, during his own interview with Access Hollywood, Joe accused Teresa of planting “the seed” for their feud when she publicly announced she would not be including Melissa in her and Luis Ruelas’ wedding on Watch What Happens Live.

“She didn’t have to do that. I didn’t want to go down that road,” he stated. “I love her. It’s my sister, and unfortunately, it just went a lot worse.”

“It’s not good. It’s really not,” Joe continued. “I feel like I went back to when we first got on the show, and you feel tension. I don’t wanna feel the tension like that at 48 years old. I just wanna be happy. But unfortunately, it didn’t work out that way.”