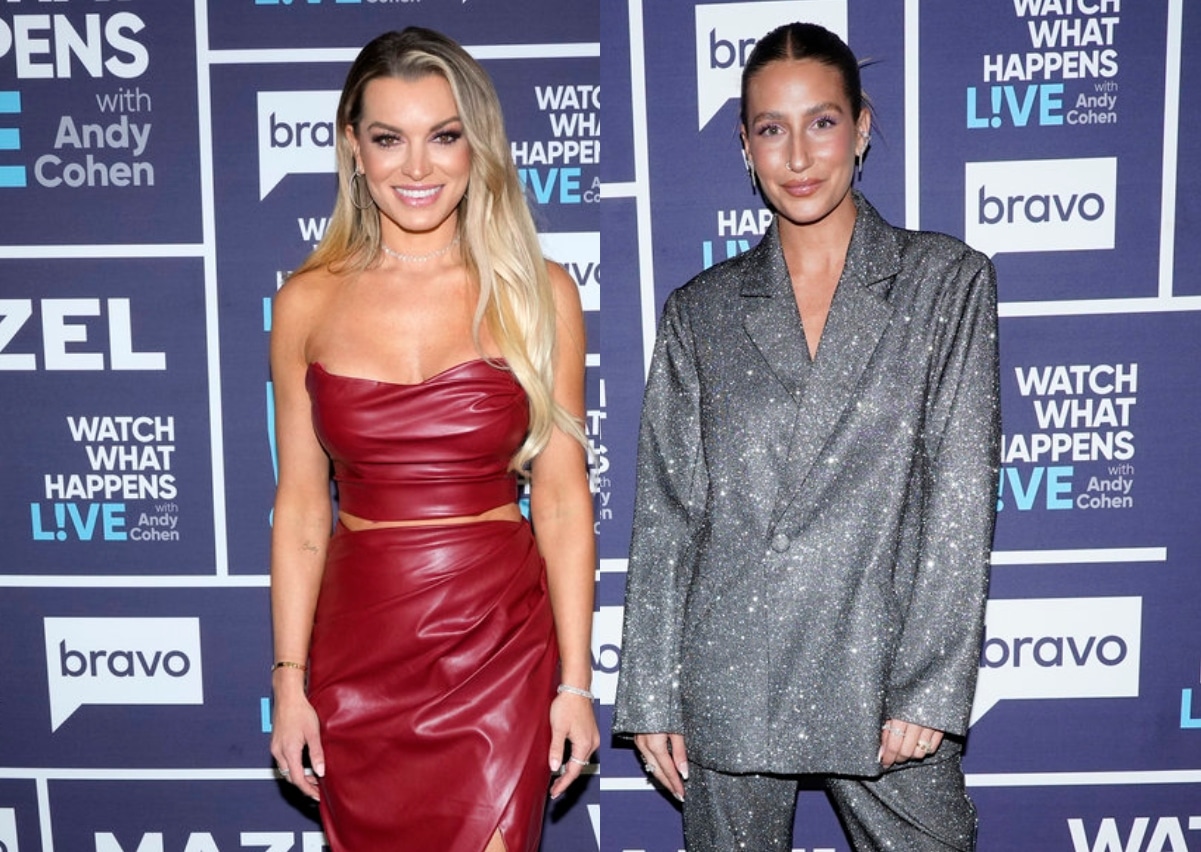 The friendship of Summer House castmates Amanda Batula and Lindsay Hubbard seemed strong – at least on the surface – until now.

In a recent interview for Watch What Happens Live, Andy Cohen asked which castmate was the rudest to fans. Eventually, Amanda nodded her head when the host mentioned Lindsay.

“Yes,” Amanda declared on the show, shared in a clip by Queens of Bravo on Instagram. “Yes, yeah, she can be [rude] … from my experience.”

After Amanda made the statement, Paige DeSorbo hinted that Lindsay will send Amanda an “uncomfortable text” – assumedly in retaliation.

When Andy asked if Amanda noticed rude behavior at BravoCon, the star responded, “No, [Lindsay] was wonderful at BravoCon. It’s been more, you know, caught off guard.”

Lindsay soon took to Instagram to make a statement against Amanda’s claims.

“I want to be very clear.. I don’t work for Loverboy,” said Lindsay, referring to the beverage company where Amanda works, along with her husband Kyle Cooke and Lindsay’s fiancé Carl Radke. “Yet [I] showed up to support my friends over 30 times in 2021 … out of support for my friends.. why would I VOLUNTEER to be at more events than I need to? Think about that one.” 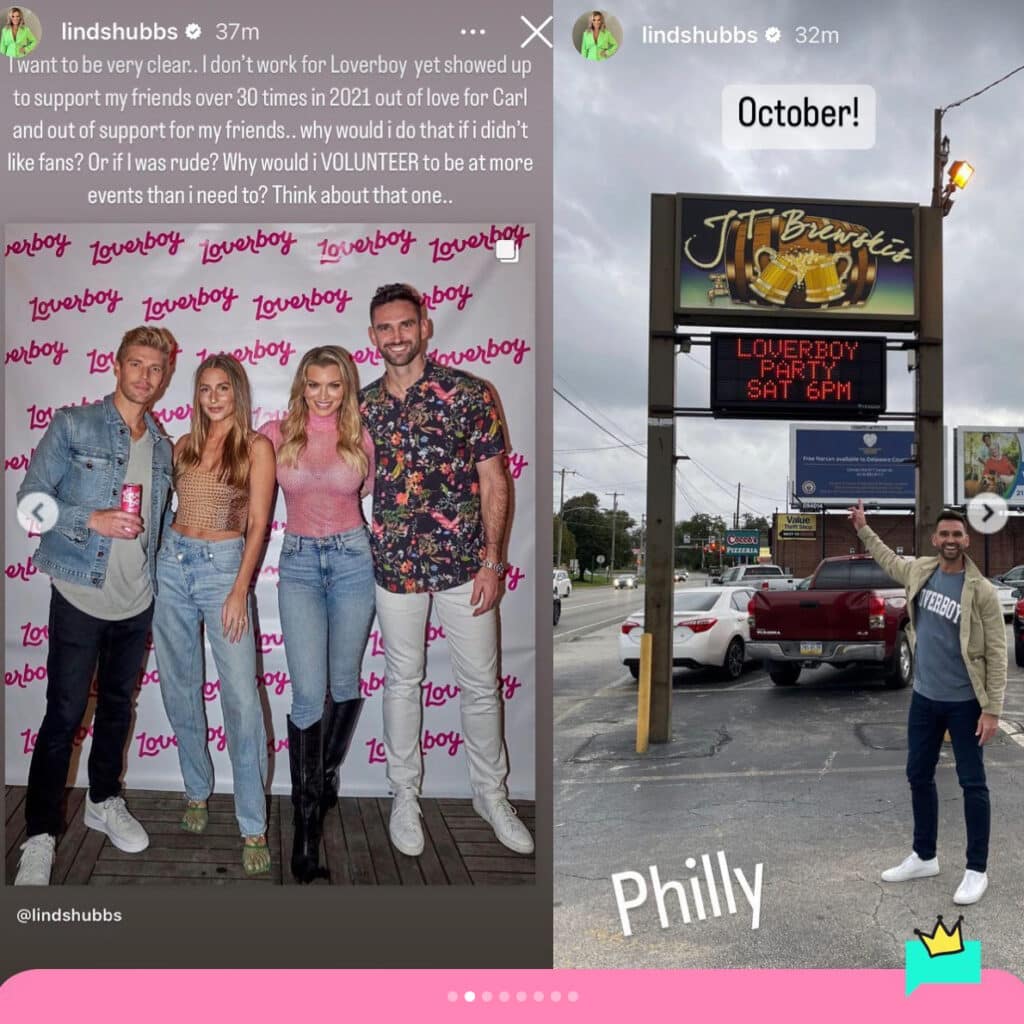 Lindsay then dropped receipts, showing a series of past posts for Loverboy. She also suggested they weren’t truly friends, emphasizing the word in scare quotes.

“Even made sure to promote their company so they felt supported by their ‘friends,'” she wrote. 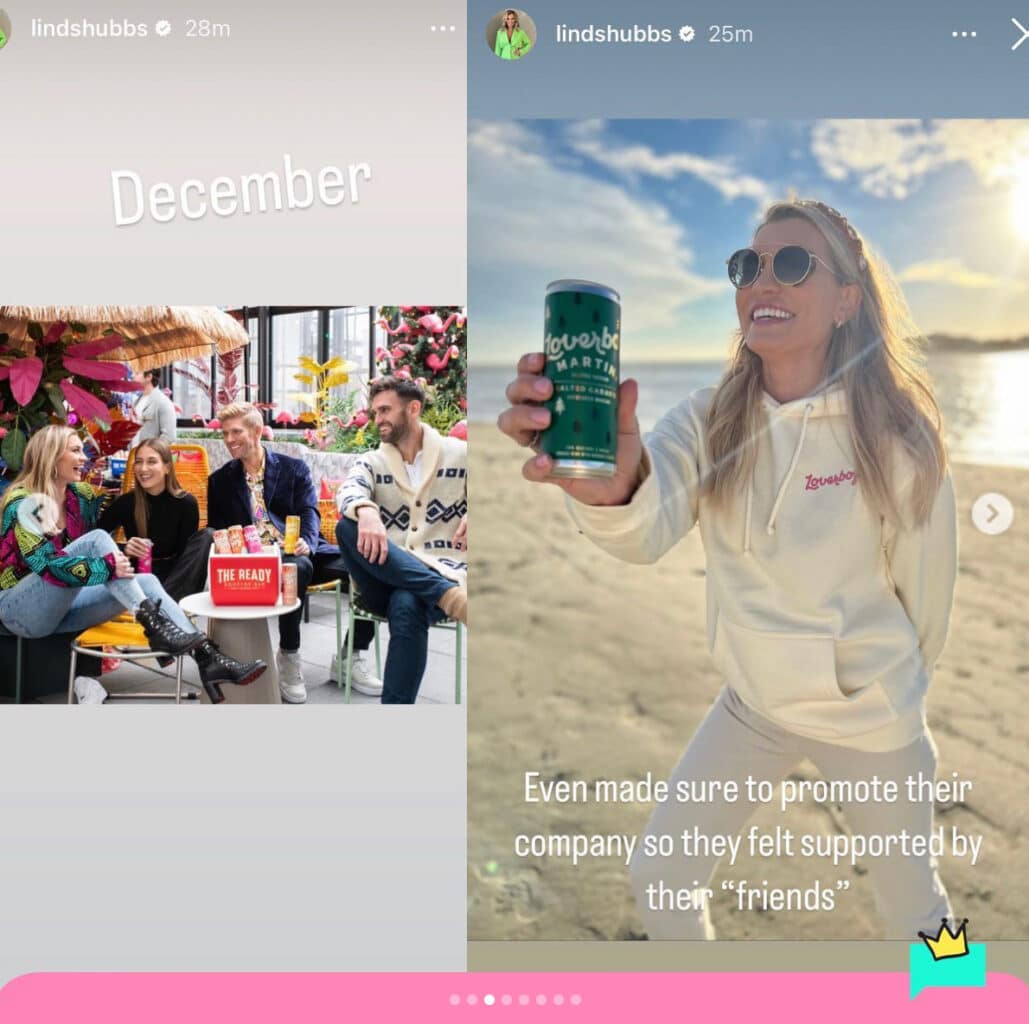 In one photo she wrote sarcastically, “Here’s us in Pittsburgh in March at a Loverboy meet and greet where I’m voluntarily rude to fans.”

“Ope,” she shared in another image, “a different event the next day in Pitt also for loverboy where I’m showing up to purposefully be rude to fans.” 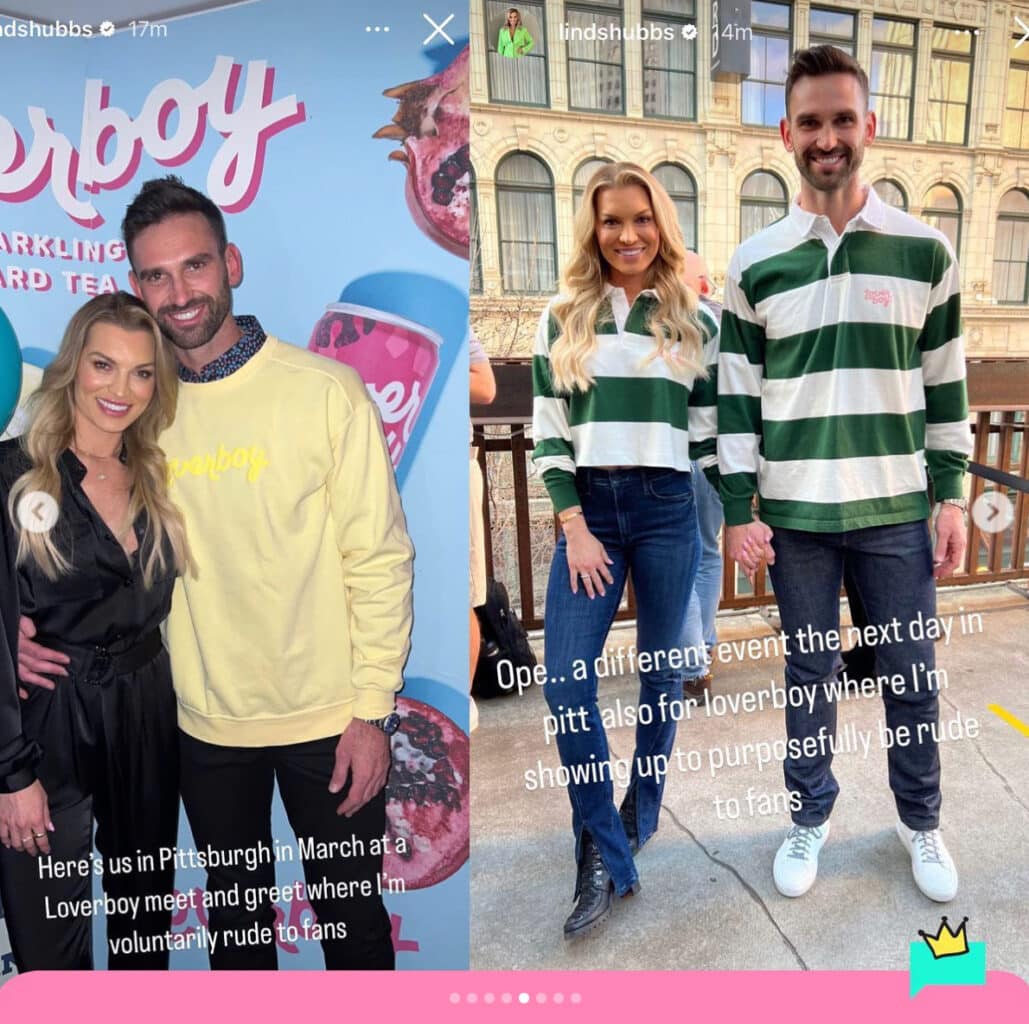 In another post, Lindsay added, “Cleveland in the house!!! Me being rude to a fan here…” before sharing a photo of herself kissing Carl, “Chicago I was the rudest to my fans.. made out with them even!” 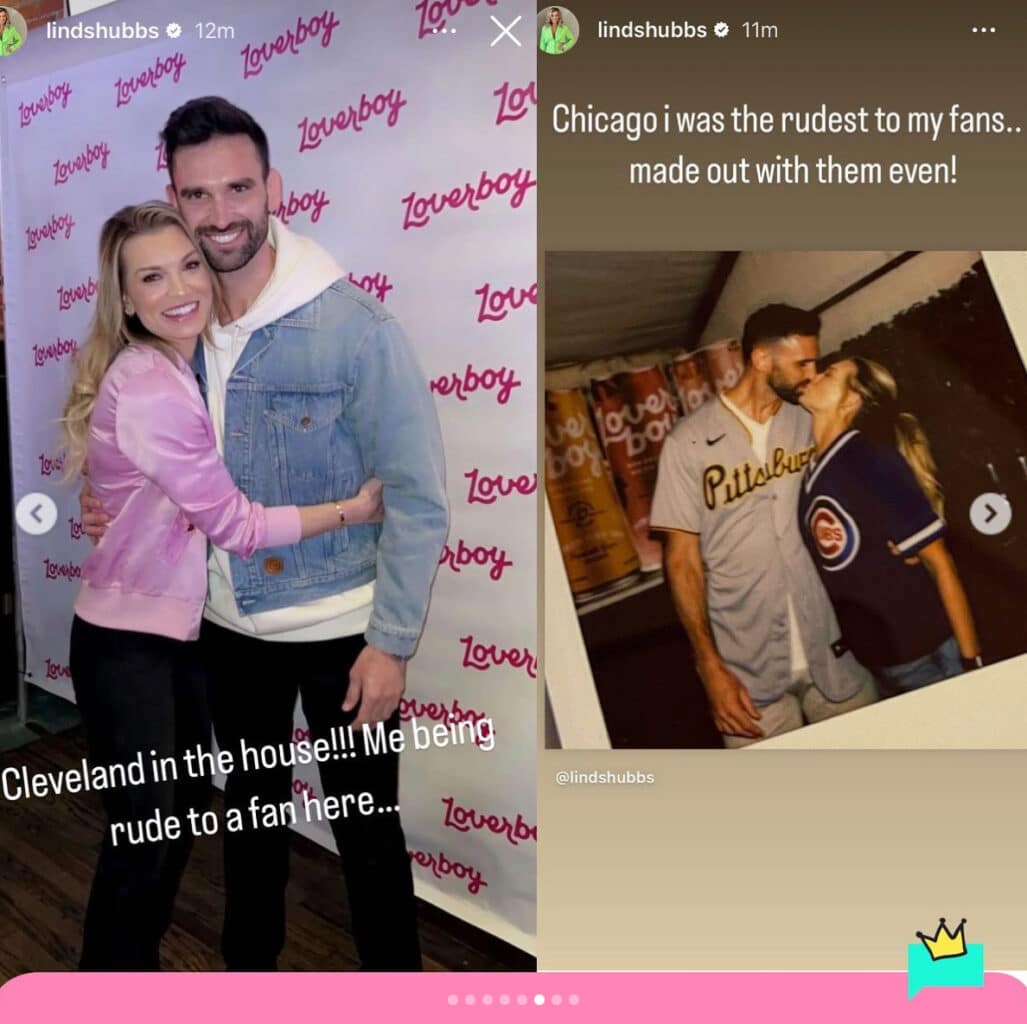 Then, Lindsay showcased a photo of herself with Amanda – holding hands. The message read, “I’m so f**king tired of people dragging my name through the mud when I’m nothing but nice to them, show them kindness, respect, and support.”

She ended the post, “Clean up your side of the street because mine is doing just fine.” 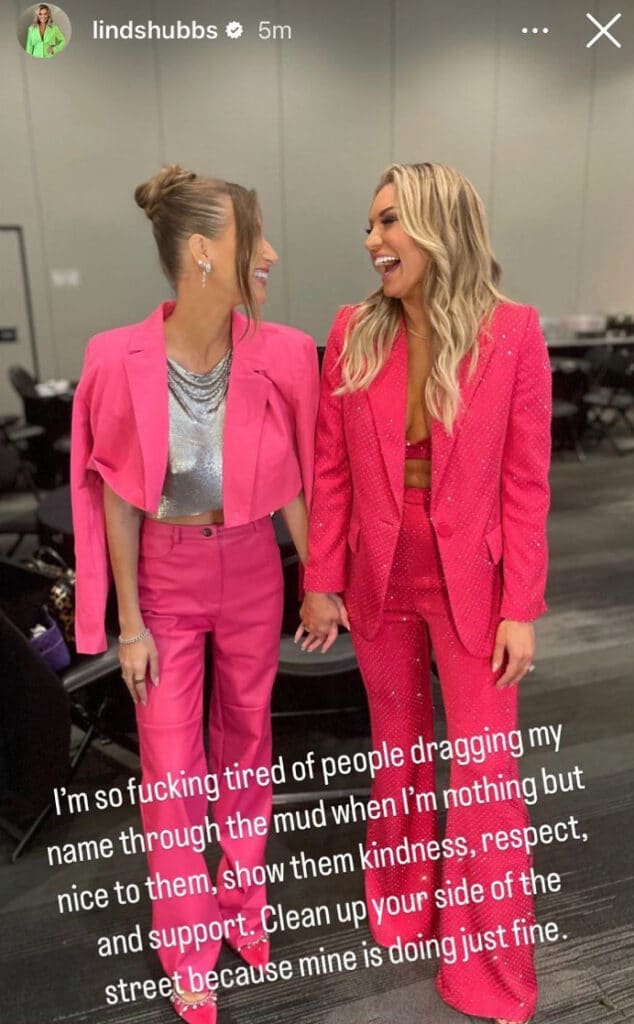 Meanwhile, a source recently named Amanda as the mystery castmate on Summer House who – according to statements from Gizelle Bryant – walked barefoot into a BravoCon bathroom. Fans have called this culprit the ‘Bathroom Bandit.’

“So I have on 100% authority that it was Amanda who was barefoot,” said popular fan account Brands By Bravo on Instagram, shared by Queens of Bravo. 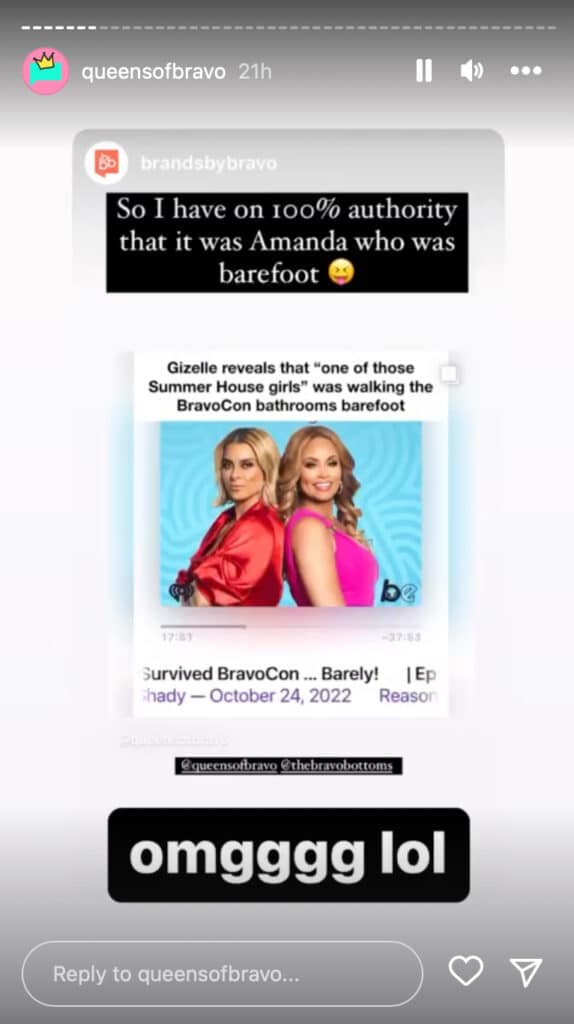