Home Real Housewives of Potomac News RHOP Recap: Candiace Confronts Ashley With Shocking Rumor About Michael and Tells Gizelle She Has no Basis on Claims Against Chris

RHOP Recap: Candiace Confronts Ashley With Shocking Rumor About Michael and Tells Gizelle She Has no Basis on Claims Against Chris 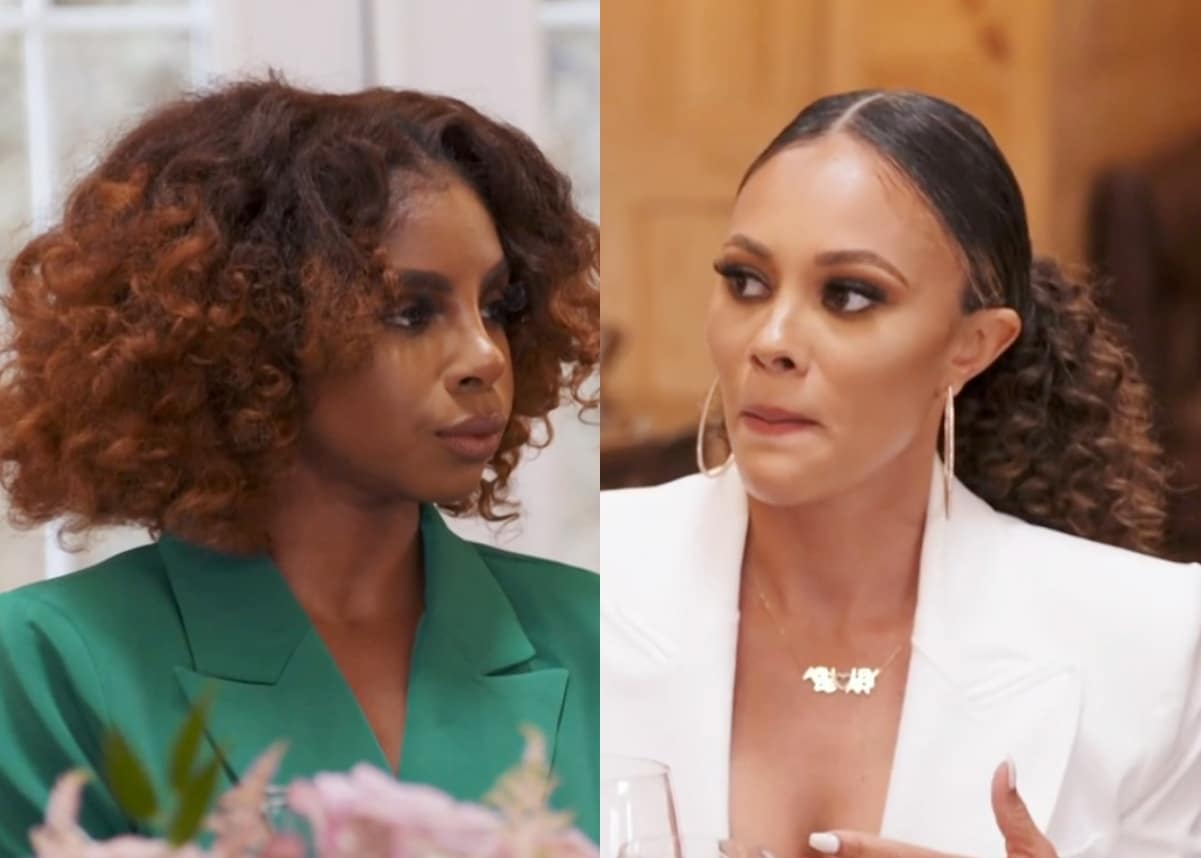 We are back to resolve the beefs of the Real Housewives of Potomac through a burn session. Ashley thinks Candiace is turning a blind eye to Chris’ behavior — while Candiace is watching her husband being roasted like a sacrificial lamb this season to deflect from what is really going on in Potomac. Grab a smoke, and watch Candiace try to extinguish the flames!

We rejoin our ladies with Ashley getting some smoke blown in her face with Candiace mentioning that an escort is asserting that Michael Darby liked to puff on his d*ck like a cigarette. Candiace knows how to go for the jugular and has literally smoked Ashley with this comment. She will not listen to Ashley since she does not respect her and will not tolerate nastiness. Karen and I both are sick to our stomachs with the image of Michael in flagrante delicto, and we both want to burn that image from our brains! IMO, Ashley is trying to blow smoke up everyone’s a*s to deflect from her own dumpster fire of a marriage.

Robyn is still sitting in the van pretending to wait for her Uber while Mia delivers some wine to her. Candiace pulls Gizelle aside to chat about what happened between her and Chris. She wants to know what specifically made her uncomfortable. Gizelle, who appears to be unable to remember her previous story lie, acts like Chris was trolling her at the RHOP reunion set so he could get her alone in her dressing room? Side note: Why did she wait several months to bring this information to light, and why would Chris hit on Gizelle with all those cameras around #makesnosense?

Candiace said that Chris told her that Gizelle invited him to her room to chat. Chris suggested leaving the door open so there would not be any rumors. Gizelle sees that comment as Chris being aware that he is being inappropriate. Candiace wants to know if Chris had malicious intent, and Gizelle does not think he was premeditated. She thinks Gizelle is the reason why women do not come forward with their truth. Gizelle acts like she is an advocate for the #metoo movement and storms off. Candiace says she is an evil c*nt, and she will not allow her intelligence to be tap danced on, so go to hell!

Ashley and Wendy are still talking inside, and Ashley tells Wendy that she was told by someone in her friend group that Chris was behaving inappropriately at the spring party. She thinks that Chris might need to check himself since he may be acting a little too friendly. Ashley is insistent that she is not being vindicative and production shows — again — that Chris was not leering at her friend.

Ashley is finally meeting with a divorce lawyer since she has been allowing Michael to control everything. She admits that they had very loose boundaries when it came to their sex life. Ashley shares that they do have a prenup, but they have been married for eight years, which brings her to the expiration date. She tells the lawyer that Michael is going to send her a proposal, and the lawyer wants her to be prepared to protect herself. Ashley asks about purchasing a house together, and the lawyer advises against it. She is no fool, and I feel like she is doing all of this on camera to protect herself from Michael doing her dirty.

Mia invites Charrisse and her lifelong friend Jacqueline — but that friendship is no longer — to come to the spa. She loves Charrisse’s vibe (Double R&S) and how she is totally unaffected by her lashes sliding off her face. Mia invites the ladies to go to Miami (MIA), and they are going to get five-star treatment. She tells Charrisse that she will be able to pick her room, but Wendy will be lucky to get a broom closet at this point. Karen is going, but she is expecting the full Grande Dame treatment since it is her birthday.

Wendy chats with Eddie about what she should be grateful for. She is thankful her mom is doing better and thinks she should take time to appreciate what she has. Eddie wants to know about the investment for the restaurant and encourages her to put that idea on pause. Wendy tells him about the burn session, and she admits all hell broke loose. She thought it turned into a Wendy roast session, but she is still looking forward to Miami and secretly glad her marriage is not being picked apart this season.

Robyn and Gizelle, aka the Romy and Michele of RHOP, are shopping for the Miami trip. They want to look fabulous, but they both will always have their looks to fall back on if not their style. Ashley joins the ladies, and she shares that she and Michael are finally talking about money. Gizelle wonders how smart Ashley is since she said they had an LLC, and she now found out there was not one. Robyn admits she knew about Michael sucking an escort’s d*ck. Production reminds us about Michael wanting to suck Juan’s d*ck, so this is nothing new. Gizelle now says she no longer wants to talk to Chris since he has been talking trash on Twitter. She is really acting calculated this season with how she is gunning for Chris, and it is rather unsettling IMO that RHOP is going in this direction.

Karen is not too happy to see Charrisse raining on her birthday trip to Miami. Gizelle acts like she is some hot commodity and is looking for a boy toy to add to her collection. Does she forget that we watched her date Sherman a few seasons back??? Wendy is not excited about the accommodations since she sees the neighborhood as too residential.

Mia stresses not to go “missing in action” in Miami. The multi-million-dollar home has a gorgeous view of the bay. Gizelle is not happy they are not on the beach and in the middle of all the action. The food looks incredible, and Mia/production has arranged for some private chefs to wait on them. Side note: They should have hit up Alexia from RHOM since she has a sick condo on the beach in Miami.

Mia gives out the room assignments, which are named after stripper names or movies. Charrisse grossly tells us that she sleeps naked and snores — now I know why she is still single. She demands a room with a bathroom since there are some things you cannot unsee. Charrisse is beyond delusional thinking that Mia was going to give her prime accommodations! Gizelle and Robyn are sharing a room that looks more like a large master suite.

Ashley hides Candiace’s room assignment and decides to change the room assignment so she will be forced to share with Wendy. Charrisse decides that she must get a hotel since these accommodations are not up to her standards! Mia calls Peter and lets him know that she is bringing eight ladies to his club in Miami. Peter says he has a beef with Wendy, which I am sure has to do with their restaurant venture bullsh*t storyline! We then get a to be continued…

Ending side note: I think some of these ladies had an agenda this season to deflect from what is going on with their own lives. I am looking at Potomac’s version of the Sanderson sisters (Gizelle, Ashley, and Robyn), who are behaving like a bunch of evil witches. Next week looks hotter than a Miami sidewalk with Mia tossing wine on Wendy and then belting her with her purse! I hope you Blurbers have a wonderful week, and see you next week in Miami!