Home Real Housewives of Potomac News RHOP Recap: Karen Alleges Juan Has a Mistress as Robyn Shows Photo of Karen With Rumored Boyfriend ‘Blue Eyes,’ Plus Did Mia Make a Move on Wendy?

RHOP Recap: Karen Alleges Juan Has a Mistress as Robyn Shows Photo of Karen With Rumored Boyfriend ‘Blue Eyes,’ Plus Did Mia Make a Move on Wendy? 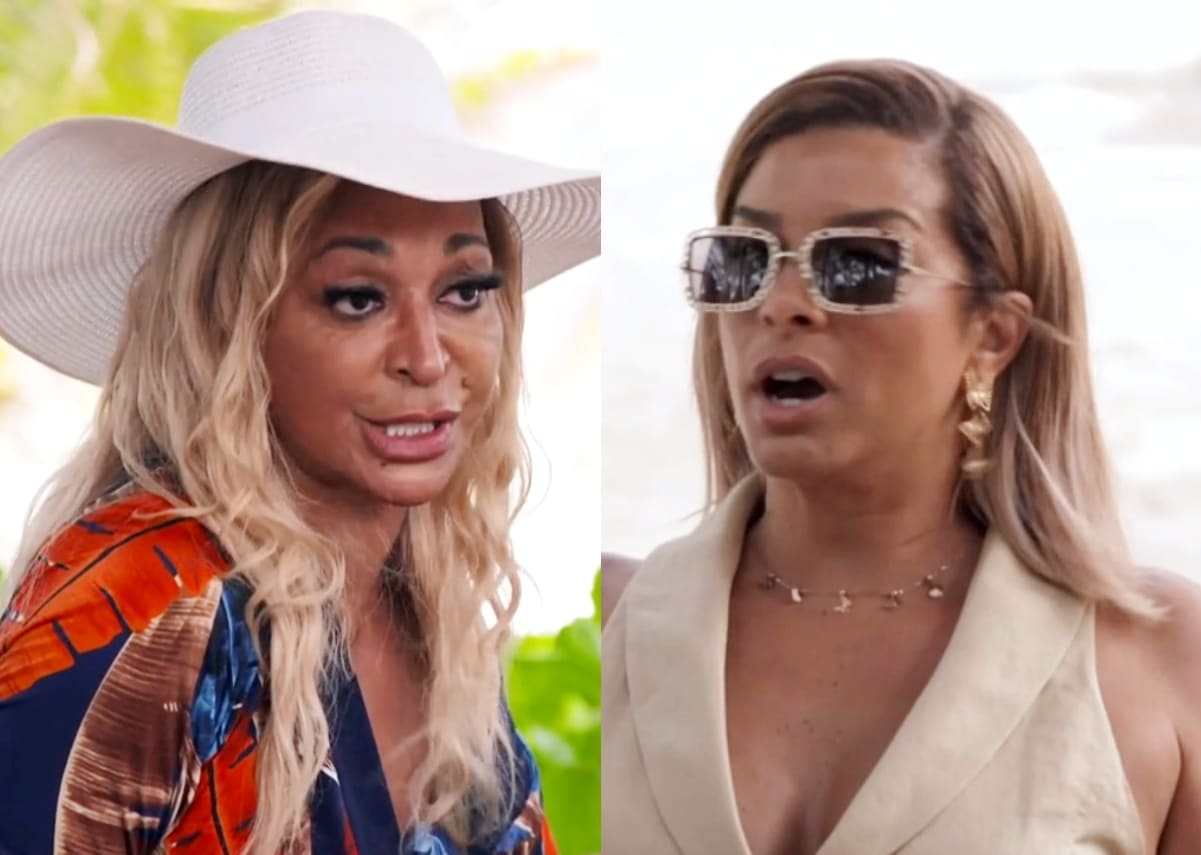 We are back in Mexico with the Real Housewives of Potomac to find out what other indecent disclosures will be made. Let us unpack this messy suitcase of secrets, shall we?

Mia and Gizelle are meeting at the bar to pre-game. Gizelle is having some “bubble guts” going on, and we get a stomach rumble from production and/or Gizelle. She is upset that Karen has been making up lies about Charrisse. Gizelle thinks that Karen is jealous of Charrisse, which I find preposterous. She also thinks that Wendy is jealous of Mia. Gizelle, my darling, did you pull that out of your a*s (since your a*s is a little on the leaky side this trip) to get Mia on your side? Wendy is a lot of things, but jealous of Mia is laughable.

Mia does not believe she and Jacqueline can find their way back to each other. She then pivots and wants to plan a bachelorette party for Robyn. Gizelle claims that Robyn will want that, but I am doubtful. Mia is happy to oblige and find the best talent out there. Gizelle is fishing bread out of her purse since her stomach is a hot mess.

Robyn is calling her friend to see if she found any wedding information for her in Jamaica. She pretends she does not want a formal wedding and thinks that an intimate wedding works better for her. Why is Robyn trying to use someone else’s wedding to freeload off of?

Ashley is working that revenge body hardcore on this trip and TikToking her way around the resort. She meets Karen by the pool, and they chat about the previous night. Karen has been happy about Ashley’s plans thus far, but she is perturbed by Robyn’s attack on her. Karen shares some deets on Juan’s other blonde woman who looks just like her, and production gives us a side-by-side drawing, which is hysterical. Ashley surmises that Charrisse provided support to Robyn when she desperately needed help after her divorce and has earned Robyn’s loyalty.

The ladies head out on an excursion to go shopping. Ashley, RHOP’s in-house postmistress, pulls Robyn aside and lets her know what Karen has said. She tells her that Juan has a girlfriend who resembles Karen. Juan allegedly is in Georgetown all the time and holding hands with Karen’s doppelgänger.

Robyn will not believe it unless she sees it with her own eyes, which is reminiscent of another RH blockhead from Jersey. She calls Juan about this, and he is pissed and will be cussing these women out. Side note: Juan’s anger was off the chain, and if it did not have merit he should have just laughed it off. Can you imagine how he speaks to Robyn off-camera?

The ladies sit down to lunch on the beach, and it looks gorgeous. Candiace is wearing some orange glasses that resemble virtual reality gaming glasses. She is wearing an adorable hat that I just love. Robyn is letting the other ladies know that she thinks Karen is guilty of mean girl behavior. Karen, of course, walks up to hear Robyn bashing her. Robyn tells Karen, “I have always felt that way about you since I have met you.” Karen proclaims that she can respect a woman who stands up for a friend, but do not come for her integrity. She resents the implication that she is mean-spirited. Karen also reminds Robyn she has stood up for her, but she resents how Robyn constantly takes digs at her.

Karen then lets Robyn know in no uncertain terms that this is the last straw for them. She also will not be labeled as fake. Karen then drops a HUGE shade grenade and reminds Robyn nothing is faker than her wedding. She believes it is very convenient to have a wedding with no witnesses in the Caribbean.

Robyn whips out her cell phone to show everyone the blue-eyed man that Karen had allegedly been canoodling with, who is also nicknamed ‘Blue Eyes.’ She has pictures that she coincidentally got from Gizelle of Karen with a man in a bar. Robyn will not show Karen the picture but shows everyone at the table. She identifies Karen by her back fat, bad wig, and crusty feet. OK, I get seeing the wig and back fat, but how does a picture show her crusty feet? Was Karen doing the locust yoga pose while lying on the floor in the bar?

Karen says Juan will want to cuss her out since she has been protecting him. She says that Juan hugged her rather inappropriately and asked her to be part of their threesome. Karen says he hugged her so tight her boobs went to her backbone. I was shocked since I was SURE it was Gordon who did that with his slithering tongue action toward Karen. Production, of course, shows a distance meter when they have hugged on camera, but maybe they did not catch the boob-smasher one. Side note: I find it ironic that Gizelle claimed Chris was inappropriate after a reunion and made a big deal out of it. Karen has kept this interaction to herself for three years and it was ALSO after a reunion.

Gizelle wants to toast to people with receipts since Robyn is the only one with them. She obviously is ignoring the fact the Grande Dame has some receipts to prove Charrisse did not get her on this show. The ladies then decide to talk to Jacqueline, who has looked defeated this entire trip.

Jacqueline does not want to have this conversation at this table. She tells Mia their relationship doesn’t matter to her. Jacqueline has vouched for Mia in the past and suggested she even was steadfast with her support during her alleged cancer scare. Mia brushes Jacqueline off like she is an annoying gnat, and she tells the other ladies she is exhausting and attention-starved. Jacqueline has finally had enough and storms away from their table.

Mia tells Wendy she wants to like her since she is beautiful and has a gorgeous family. She thinks Wendy has insecurities and they agree to talk it out. Side note: How contrived is this scene and how much production influence had to be done to get Mia to say she likes Wendy?

Wendy goes to Mia’s room, and they are all chummy and it is creeping me out. Mia believes they have never been able to get on track. Wendy thinks her space was disrespected. Mia says she is sorry for being disrespectful. Wendy says Mia is beautiful, BUT she is gorgeous. Mrs. Four Degrees will never change with her delusion.

Two hours later… Ashley lets us know the party continued at a bar with more shots. Did Gizelle have to wear Depends that she borrowed from Rinna to be able to do MORE tequila shots? Mia, who is grunting like an animal, slithers up to Wendy and tells her she wants to eat her box like a crotch-able?!? Well, we survived another RHOP episode that was heavily produced, BUT where will this group go from here?

Next week, Robyn gets her bachelorette party, and Karen and Wendy are not invited. We also find out that some ladies were sharing their sexy parts with each other. Be well, and have a fabulous week, Blurbers!