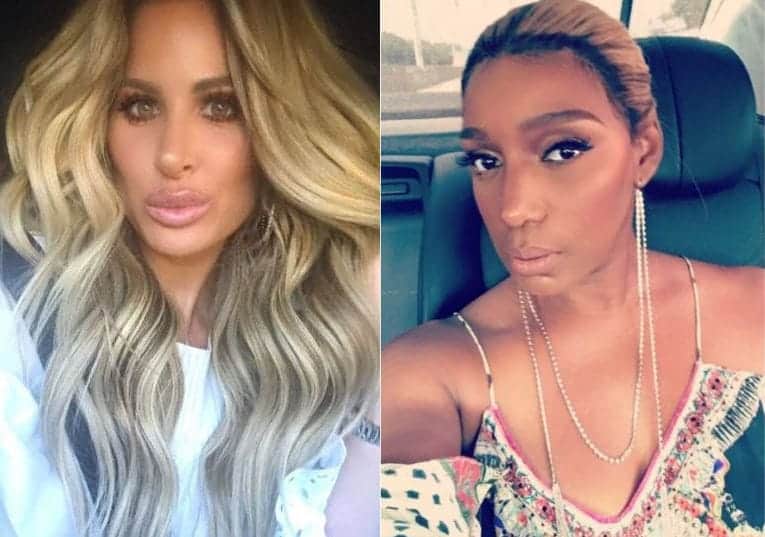 A week after Nene Leakes went on several rants calling Kim Zolciak and her daughter Brielle Biermann “racist”,  Kim is revealing she has hired a high-powered attorney, and is threatening to sue Nene for millions if she doesn’t retract her racist claims.

The drama for the Real Housewives of Atlanta stars began when Kim’s daughter Brielle filmed a bug crawling on the bathroom floor of Nene’s home back in July when Nene hosted a party. And then last week Kim sent that video to some of their RHOA castmates stating it was a roach which set Nene off, as she claimed the allegation that she had roaches in her home was racist. By the way, the bug in the video wasn’t a roach but some sort of flying ant.

Fast forward to today and Kim is demanding a retraction and an apology.

“She put #KKK on the Instagram post. I’ve hired legal counsel at this point. It’s just that bad,” she told Larry King on Larry King Now in an interview on Tuesday.

“It’s inappropriate. In this day and age, people are dying over racism,” stated Kim, who revealed she hasn’t seen Nene since the drama started. “I’m on a show with all African-American women and I’m the only one that’s ever been on the show that’s Caucasian, so it’s the card that sometimes they play and it’s gross. And I won’t allow it.”

“I probably won’t shoot with her again,” continued Kim.  A video from that interview is below.

The letter calls Nene’s claims “outrageous and malicious lies.”   Nene previously stated, “Kim & her child did something very wrong & disgusting! Black people and roaches in the same sentence don’t work for me boo.” She then went on to call Brielle “#racisttrash” and “#KKK,” adding, “Kim & her daughter oops whole family are racists!”

Kim’s lawyer points out the fact that Brielle, 20, never posted the video showing the “roaches” online, but it was Nene who leaked it to prove her point.

The demand letter also claims Nene is attacking Kim due to jealousy! Stating that Nene is trying to get people to boycott Kim’s spin-off Don’t Be Tardy with hashtags like, #blackpeopleneedtostopsupportingtheprejudice.”

Kim’s attorney is demanding a retraction on the social media sites where Nene posted her comments, plus an apology.

The letter threatens a lawsuit if Nene doesn’t take back her comments: “Your conduct exposes you to multi-million dollar liability.”

We reported that Nene also threatened to sue Kim yesterday after she posted some tweets which appeared to insinuate that Nene abuses prescription pills. So much ugliness between these two former friends.

Moving on to other Nene news as despite her apology for telling a female heckler at her comedy show that she hoped she would get raped by an Uber driver, it seems she might still face some severe consequences for her actions.

A new report by Radar Online states Nene’s RHOA job is now “on the line” following her vile comments.

A show source reveals the network “can’t stand by her statement” and thus are “having a meeting with producers to discuss her future.” Yikes!

“There will be a punishment and they are determining what it will be,” says the insider, adding “there’s been so much backlash and co stars say she’s gone too far and they want her gone.”

“By tomorrow there should be some repercussion from a leave of absence to being fired,” the insider continues. “They are filming now and would have to figure out how it will play out.”

Bravo is also reportedly considering replacing Nene as the new season of RHOA is still filming.

TELL US – DO YOU THINK KIM IS RACIST? SHOULD BRAVO FIRE NENE FOR HER RAPE COMMENTS?