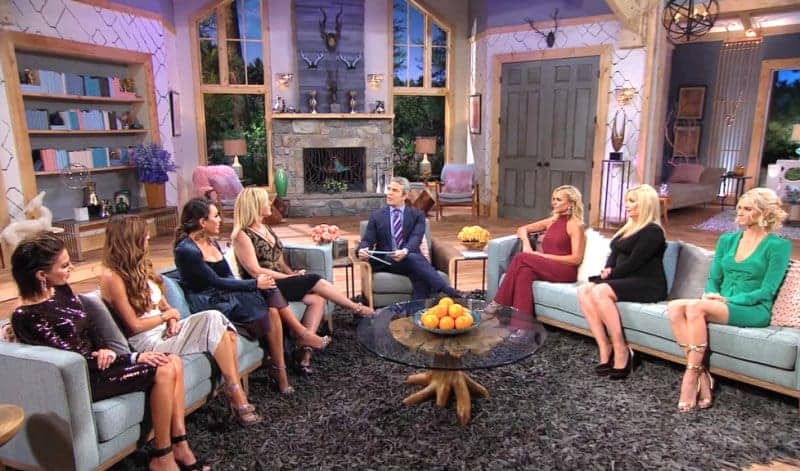 Bravo has just released the dramatic video trailer for the Real Housewives of Orange County season 12 reunion, and it does not disappoint!

Arguably the most explosive part of the trailer, posted below, is when Vicki Gunvalson storms off the stage and threatens to quit the show.

“I’m off this damn show!” yells Vicki while backstage.  Interesting words there from Vicki as it has been rumored that Bravo demoted her to a ‘Friend of the Housewives’ for next season.  Vicki’s walk off comes after she is shown getting into a shouting match with former BFF Tamra Judge.

“Are you f**king kidding me? It was the most staged bulls**t,” shouts Tamra while Vicki responds: “That doesn’t look good on you, Tamra,” and Tamra clapped back, saying: “Nothing looks good on you.”

Lydia McLaughlin and Meghan King Edmonds also get into a tiff over Lydia’s religion.

“You don’t understand my faith, so of course it’s not going to make sense to you,” Lydia explains to Meghan.

Kelly Dodd can be seen in high spirits as she talks about her life amid her divorce while it’s the opposite for Shannon Beador who revealed to her castmates during the day of filming that she and David Beador had been separated for five weeks.

“I thought that I’d be prepared,” says an emotional Shannon while wiping away her tears.

Vicki chimes in tearfully saying, “I’m in shock if I was responsible for any of it. I feel awful.” Vicki’s likely talking about Shannon’s divorce considering she spent the past two seasons accusing David of abusing Shannon.

Peggy Sulahian is also shown stating that she brought “proof” of something to the reunion. Oh goody, another video?!

You can watch the RHOC reunion trailer below.

TELL US – THOUGHTS ON THE RHOC REUNION TRAILER? LOOKING FORWARD TO IT?