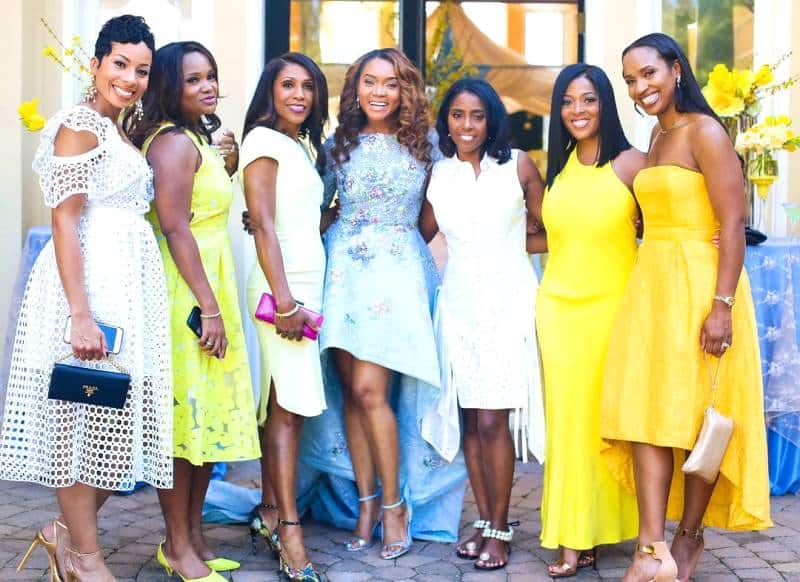 You’ve probably heard the theory that marital problems are contagious among groups of friends. You know, one marriage, gets rocky, and the rest quickly follow suit? Well, this season of Married to Medicine has served as  proof that it can happen.

Just before the beginning of the season, the cast was rocked by the news that Dr. Jackie’s husband, Curtis had been having an affair.

Dr. Jackie and Curtis were always the couple that the others looked up to. They seemed happy. They were successful. They’d been through so much together. Dr. Jackie was devastated, of course. But the other ladies were shocked and heartbroken, as well.

After all, Jackie’s a wonderful person, who surely deserves better. She’s suffered through breast cancer twice, as well as the crushing realization that the children she wanted more than anything wouldn’t be possible. If anyone should get a break it’s Dr. Jackie.

The news of the affair also caused a wave of anxiety among the women. If this could happen to Jackie’s seemingly rock solid marriage, why not theirs? Many of the  other couples have been in a state of flux ever since. The ladies have spent a lot of time taking the temperature of their relationships, and several of the husbands are paying the price for their friend’s dalliance.

Quad and Dr. Greg are in a particularly bad place. They’ve argued quite a bit about Curtis’ affair, among other things, and it’s gotten pretty tense. On last night’s episode, Dr. Greg, once again stormed out of the house in frustration, after yet another argument.

Quad has been feeling unappreciated in her marriage, and is angry that her husband relies on her to do everything. Constantly caring for his needs above her own  is also making her feel unfulfilled. She was trying to explain this to Greg, but he became frustrated with her failure to be more specific about what she wanted him to do, and left her sitting alone.

The following day, during a ride with Toya, Quad said she was looking for a “new residence” just for herself. Toya also witnessed a pretty contentious phone call between the couple, and began to cry. Toya told Quad to think long and hard before leaving Greg, but when they got to their destination, she realized that “new residence” was actually a reference to the rumor Mariah had started about Quad once living in her car.

In actuality, Quad was buying a beautiful, brand new Mercedes SUV….$175,000 worth of beautiful. And Greg didn’t know anything about it. Toya told Quad that it probably wasn’t a good idea to make such a large purchase without, at least, telling her husband. But Quad disagreed. She said she was spending her own money, and that Greg hadn’t consulted her when he bought his car, so that was that.

Toya’s spent a lot of time this season wondering about her own marriage to Dr. Eugene. The two have been mostly happy, but a large debt to the IRS has Dr. Eugene working extra shifts at a hospital 400 miles away. Toya is concerned because Eugene spends nights away from her, and is often exhausted when he is home. As a result, their activity in the bedroom has come to a screeching halt.

Toya witnessed her own parents’ marriage crumble after her father’s affair, and is worried that Eugene is losing interest in her. She’s been pretty obsessed, telling everyone who will listen, including both of her parents, that they only have sex once a month. She even confided in the other ladies (not to mention an audience of millions) about Eugene’s habits regarding…well, let’s call it self love. This will no doubt do wonders for their sex life going forward. Poor Dr. Eugene!

Dr. Simone and her husband, Cecil are having marital woes, as well. Everyone sees Cecil as the perfect guy…jovial, sweet, caring..but Simone often sees another side. According to Simone, Cecil can be condescending and bossy. Cecil feels they don’t communicate enough, and that time together is scarce.

Dr. Simone spends a lot of time in the couple’s “North House” because it’s closer to the hospital, and Cecil has accused her of purposely scheduling her rounds and surgeries early in the morning as an excuse not to stay at their “South House” with him and their sons more often. Lately, the couple has been all but leading separate lives.  When Cecile does show up at the “North House”, Dr. Simone reacts as though he’s a guest who has shown up unannounced and uninvited.

Still frustrated, Cecile sat down with Dr. Jackie, and the two discussed their marriages. As the best friends of each other’s spouses, this was probably a pretty genius idea. Dr. Jackie explained to Cecile that Dr. Simone wasn’t even sure if Cecile loved her anymore because he never says it. Cecile explained that his parents didn’t often say ‘I love you’ when he was growing up, and that is was hard for him. But from Dr. Jackie, he received the criticism well, and promised to try to do better.

Dr. Jackie told Cecile that she was finally ready to sit down face to face with Curtis, and discuss his affair. Dr. Jackie asked Curtis to leave their home, and while they’ve talked on the phone, and he’s sent daily gifts and cards, she hasn’t seen him in person. This has been hard on Dr. Jackie. Not only has she been betrayed by the man she loves, their fame has meant that his affair has been fodder for tabloids and gossip blogs.

Dr. Jackie has always maintained an stellar reputation, and she is humiliated. What’s worse is that many people seem to blame her for his infidelity. Dr. Jackie is reserved, and highly driven, and to many people that translates to her being an ice queen, who put her career ambitions ahead of her husband’s needs.

But she’s a doctor, for crying out loud! A black woman in a field dominated by men! She’s had to work at least twice as hard for her success. And if she were a man? Well, don’t even get me started. But suffice to say, she wouldn’t be condemned for being “too ambitious”.

The only member of “The Fab Five” who seems to be in a good place in her marriage these days is Dr. Heavenly. As we all know, Heavenly pulls no punches, so she was very clear with her husband, Dr. Damon, or “Daddy”, as she calls him, that having an affair on her could be dangerous.

With that matter settled, Dr. Heavenly has mainly been working on herself. She wants to be less quick to anger, and “go off” than she has been in the past, and she’s made SOME progress. Dr. Heavenly even managed to make nice with Mariah, who surprised the ladies during their trip to New Orleans a few weeks ago, and seems to want back in the fold.

Things ended badly between Mariah and Heavenly, and at the last reunion, Heavenly made a disparaging remark about Mariah’s mother, Lucy. In Dr. Heavenly’s defense, it wasn’t as bad as it sounds. In fact, she didn’t technically say anything about Lucy directly, but rather threw out a casual “your mother”, in response to Mariah’s insults toward her.

All the same, Heavenly apologized to Mariah during the trip. And while, Mariah forgave her, she said she couldn’t accept the apology on her mother’s behalf, so Heavenly agreed to apologize to her directly. The thought of a confrontation with Lucy made Heavenly nervous. Lucy has a pretty short fuse, herself, and things have the potential to get pretty ugly when she’s around.

Heavenly didn’t have to wait long to apologize because in the interest of renewing her friendships, Mariah held a Mother’s Day party at her home, and invited all the ladies and ,of course, her mother.

The party was over the top, to be sure. It’s Mariah, how could it not be?! She made her grand entrance, wearing an enormously poofy blue gown (after asking her guests to wear only white or yellow) with a long train that got caught in the door. But it was festive. Many of the ladies brought their own mothers, and everyone seemed to have a great time, especially Dr. Contessa’s nanny, Miss Renee, who may have had one too many “doubles” at the bar.

Dr. Contessa is brand new to the group this year, and her relationship with Miss Renee is a bit unorthodox. Contessa lost her own mother, and she and Miss Renee, who also happens to be the mother of R&B singer Donell Jones, have sort of  adopted each other. It’s really very sweet, but it also means that Miss Renee is often the one who bosses Contessa around. The other ladies, not being privy to the nature of their relationship were a bit taken aback by Miss Renee’s insubordinance. She was also quite loud throughout the party, even interrupting Mariah’s toast, and  Contessa seemed a little embarrassed.

But truth be told, that toast needed to be interrupted, because Mariah was only using it to stir the pot. Mariah handed out “awards” to several of her guests, including Toya, whom she praised both for being a stay at home mom, and oddly, for never having insulted her mother, no matter how heated their arguments became.

This was clearly a dig at Heavenly, and everyone knew it.  It looked like Mariah was up to her usual,  shady tricks, and Quad’s choice to skip the event, altogether, was starting to seem like the smartest way to go.

Filled with dread, Heavenly finally made her way over to Lucy’s to apologize. Heavenly said that she was sorry for offending her, and that the remark she’d made was childish, and not meant for her. Lucy said that she could not accept the apology because it would be “ungodly”, since she was still angry, and not yet ready to really forgive Heavenly.

Heavenly was pretty shocked, but quickly moved on, and joined the others who had reconvened for a butterfly release ceremony to signify life and renewal. It was all very lovely and hopeful…until Mariah stepped on one of them, squishing it beneath her stiletto.  Let’s hope it wasn’t a sign of what’s to come.

Things were mostly calm among the ladies at the start of the season. They were being supportive and kind, banding together in the face of all their challenges.

But now Mariah’s back, and while she claims that she’s turned over a new leaf, and is ready to move on with the other ladies, scenes for next week’s episode would suggest otherwise. Stay tuned!

TELL US – WHAT ARE YOUR THOUGHTS ON THE MARRIED TO MEDICINE RECAP AND LATEST EPISODE? IS MARIAH BACK TO HER OLD TRICKS? SHOULD MISS LUCY HAVE ACCEPTED HEAVENLY’S APOLOGY? WAS MISS RENEE OUT OF LINE?