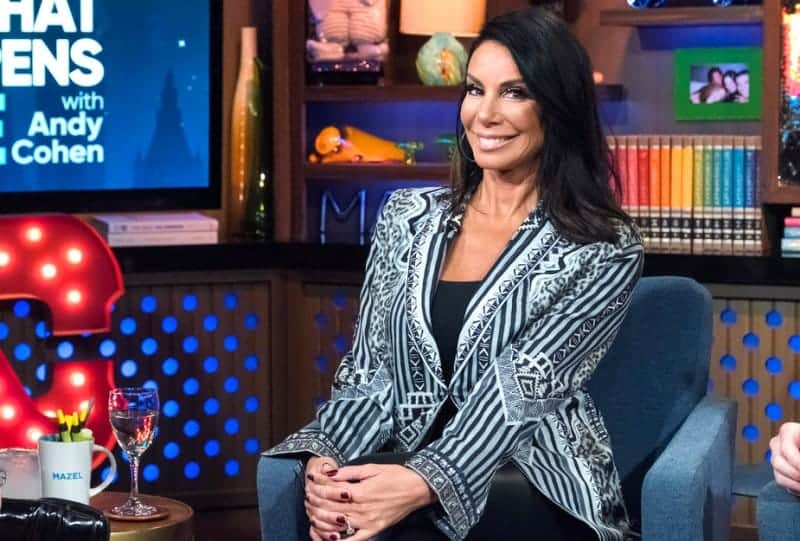 The Real Housewives of New Jersey star Danielle Staub appeared on the Domenick Nati Show, and she spilled some pretty hot behind the scenes tea!

In her interview, Danielle shares her real feelings on the possibility of Caroline Manzo and Jacqueline Laurita returning to the show, accuses Dolores Catania of being jealous of her friendship with Teresa, plus she makes it clear editing is NOT to blame for Siggy Flicker coming off as a little bit unhinged this season.

If you watched this week’s reunion show, you’ll know that the ladies were asked about the possibility of Jacqueline and Caroline returning to the show. In fact a report came out this week that Bravo is seriously considering asking them back for next season.

Dolores whet everyone’s appetite with a cryptic “there’s always next season”, and fans have been buzzing ever since! Caroline has been gone for the last three seasons, and Jacqueline only bowed out last year, but neither left on good terms with their fellow cast mates, and their return would certainly mean a rematch.

But Danielle’s not worried. “Bring it on”, she told Domenick. These days she has plenty of friends. In the past, Danielle’s squabbles with the ladies were always “5 to 1”, and she feels they “used Teresa” to attack her. However Danielle and Teresa Giudice have since renewed their friendship, and Danielle was happy to report that the two  “haven’t missed a beat”.

Danielle also enjoys a close friendship with Melissa Gorga and Margaret Josephs, and is confident that she’ll have all the backup she needs, should Jacqueline and Caroline return.

While Danielle was sure that the viewers would love to see the fireworks between the women, she did have one caveat: it “may not be the type of drama Bravo wants”, she warned, because things could get pretty ugly, particularly when it comes to Jacqueline, who Danielle says “has a few screws loose”, and “needs to be watched”.

It seems the only cast member who would be happy to see Jacqueline and Caroline is Dolores. She’s maintained her years long friendship with the sisters-in-law, and she’ll be in need of an ally, now that Siggy has announced that she won’t be returning for season 9.

Danielle and Dolores don’t get along, and Dolores has been convinced all season long that Danielle only returned to the show to find a way to back at Teresa for humiliating her during the first two seasons.

Danielle however feels that Dolores is just “jealous” of her friendship with Teresa, but that she “doesn’t really matter” because she hasn’t been there from the beginning.

Part of the appeal of the Real Housewives of New Jersey has always been that these ladies weren’t thrown together by chance. Most have known each other for decades, making both the bonds and the blowups between them very….well, REAL. But that hasn’t stopped a certain cast member from blaming “bad edits” for the way she is depicted on the show.

I’m speaking, of course, of Siggy. This woman does not like to take responsibility…for ANYTHING. It was a running theme throughout season 8. Throughout the season, Margaret seemed to be her favorite object of deflection, but now she’s turned on the producers.

According to Danielle, this is nonsense.   She said “no edits are unfair”, and if Siggy appeared crazy on the show, it’s because she’s crazy.

Certainly nothing proves this point more than “cake-gate”. Viewers will understand that calling it a “gate” is NOT overstating things, because all hell broke loose..over cake! A “mostly plastic” cake, as Danielle pointed out in the interview.

Danielle told Domenick that reality television changed Siggy, and that she had become “much more aggressive” since they began filming.

But crazy is what the ladies are known for. In fact, Danielle said she never would have been picked for the show if she’d been sane. “Sane is boring”, according to Danielle, and sometimes when she’s bored, she likes to cause a little trouble.

That was certainly the case at the grand opening party of Gorga’s, where Danielle says she and her fiancé had a little “unpredictable” fun in the restroom….to break up the monotony.  Haven’t we all done that?

Well, maybe not. But damn it, it was hot in that restaurant, and they’d been “talking about freakin’ cake for four months”! So, really, what’s a girl to do?! And she DID have Teresa’s permission. Delightful, right?! Melissa and Margaret seemed to agree it was fine, and all in good fun, but when it was discussed on the reunion, Dolores and Siggy thought it was “disgusting”!

But what do they know?! It’s not as if the cameras actually filmed the encounter,  and at least Danielle “owned it”, which is more than Siggy can say. Boy, have we missed you, Danielle!

TELL US – WHAT ARE YOUR THOUGHTS ON DANIELLE’S INTERVIEW?