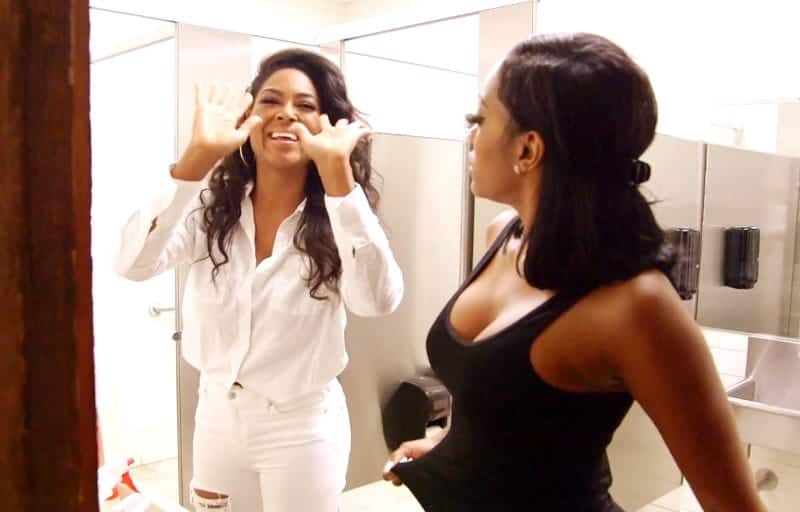 In last night’s episode, we once again saw many of  the ladies of the Real Housewives of Atlanta came together for a good cause.

It was really nice to see. But an interesting thing about these ladies: they can be wonderful to everyone but each other.

After seeing the devastation of Hurricane Harvey in Houston, many of the ladies decided to roll up heir sleeves, and help out.  Porsha’s family’s charity, Hosea Help the Hungry and the Homeless, was hosting several events to raise funds and provide aid.

When Porsha mentioned it to the ladies, they weren’t exactly enthusiastic, although that probably had more to do with the fact that only Sheree and Kim even like Porsha, than a lack of charitable spirit. But as it turned out, Cynthia was asked to host a benefit concert, and ended up going to Houston anyway.

The rest of the ladies begged off for various reasons, so this left just Cynthia, Porsha, and their sisters going to Houston. Cynthia and Porsha have never been close, but they actually bonded on the trip. Porsha was seeing that Cynthia could be a little more easy going without the others, and Cynthia was happy to see Porsha’s giving side.

The first day in Houston, they gave out food and supplies, and attended the concert, and just before Cynthia was about to leave, Kenya showed up. Kenya had already made arrangements to do some work with Habitat for Humanity, and Porsha was hurt to discover the next morning, that Cynthia would be going along with Kenya, instead of attending Porsha’s event, as planned.

Cynthia said she would try to make it, “if they didn’t get caught up”, but it was clear that she was blowing Porsha off in favor of trailing  Kenya.

When they arrived at the site, Kenya became a drill sergeant. She quickly dismissed the people outside, who asked for photos, saying they weren’t there “for play”. Ok, so Kenya wanted to get down to the serious business of rebuilding homes. But come on! These people have been through a nightmare. Take the damn picture!

Once inside with Cynthia and her sister, Mallory, Kenya barked orders, and refused them water breaks, telling them they could drink when they were done. And the craziest part?! They listened to her, and obediently (and thirstily) continued tearing down drywall.

Knowing that the timing of their events conflicted, and still feeling the vibe of sisterhood she thought she’d created with Cynthia, Porsha sent her friend, Shamea to help Kenya, on her behalf.

It was a nice gesture, and Porsha was only trying to show her support, but Kenya was rude to Shamea, as well. When Shamea called for directions, Kenya cut her off, and said she was busy “trying to help people”, and told her to call one of the volunteers, before hanging up in a huff, and muttering about not being her assistant. Honestly, just giving her the address would have been faster.

Once Shamea got there, and told Kenya that Porsha had sent along a donation, Kenya  just waved it off, and said they could deal with it later.

When the ladies got together for dinner that night, Porsha’s sister, Lauren mentioned to Cynthia that they had been disappointed that she and Kenya hadn’t shown up, especially since Porsha had gone to Cynthia’s event.

Cynthia felt that Porsha should be grateful any of the ladies ever showed up to anything for her, but wisely kept that to herself, and said that she hadn’t realized she was expected to attend. Porsha wasn’t buying it, as they’d discussed the plans at length, but she let it go.

Ok, that’s progress. No need to fight. The important part is that they all helped out, right? No. Shamea brought up how rude Kenya had been to her throughout the day. Kenya was running late, and in her absence, Cynthia was quick to jump to her defense, saying that Kenya had just “been in her zone”, and was serious about helping people, but certainly not rude.

When Kenya did come flitting in a few minutes later, Shamea confronted her directly. Kenya insisted that there was nothing to talk about, and told Shamea it was “a better look”, for her to let the matter go. When Shamea continued to try to speak, Kenya pulled away from the table and stomped off to the ladies room.

Now, the “old Kenya” would have torn into Shamea, that’s true, but the “new Kenya, the “married woman” Kenya is no longer about that life. But she IS still about overreacting, apparently. Kenya, from behind closed doors, could be heard screaming at a producer, who was desperately trying to calm her down.

Kenya continued her rant, saying “I don’t give a f*** about those bitches”, and “every girl at that table is f***ing stupid”! Really?! All that just because someone said they felt you were rude to them?!

And we can only assume that “those bitches” included Cynthia, Kenya’s  most loyal friend and ardent supporter (lap dog). What’s up with that?! #PoorCynthia

But perhaps Kenya is feeling pressure from her husband Marc. She could also be heard saying that situations like this one were why her husband “didn’t want to be involved” with the show.

When Porsha tried to come into the bathroom to check on her, Kenya , threw down her microphone, and yelled “this isn’t a moment”, before flipping her middle finger at the camera, and slamming the door.

She repeated that phrase when Cynthia went out to her car to try to talk, then rolled up the window, and drove off. Well, rode off. It was a chauffeured car. But still, how rude!

We also got a little more tea on the Sheree and Tyrone front last night. When Sheree mentioned during one of their calls that NeNe had told the others that he was a “con artist”, Tyrone said he was surprised NeNe would talk about him at all because he knew things about her too.

He asked if NeNe was still married because if so “going down that road could be bad for her.” So, it turns out, that years ago, when NeNe and Sheree first met Tyrone, NeNe was the one who was interested in him. And Sheree knew all about it at the time.

Well that explains everything! All this time, NeNe’s been mocking Sheree’s relationship, and calling him out for his crimes, and you had to wonder…what does she care? Why does she seem so mad?! All along, she’d been jealous! Who knew?

A pretty juicy episode, all in all, but just wait until next week! It looks like we’re going to be introduced to a new housewife Eva Marcille, (aren’t these six enough?) and it seems that she already knows Cynthia’s new boyfriend, Will. Stay tuned!

TELL US – WHAT ARE YOUR THOUGHTS ON THIS RHOA RECAP & LATEST EPISODE? WAS KENYA OUT OF LINE?