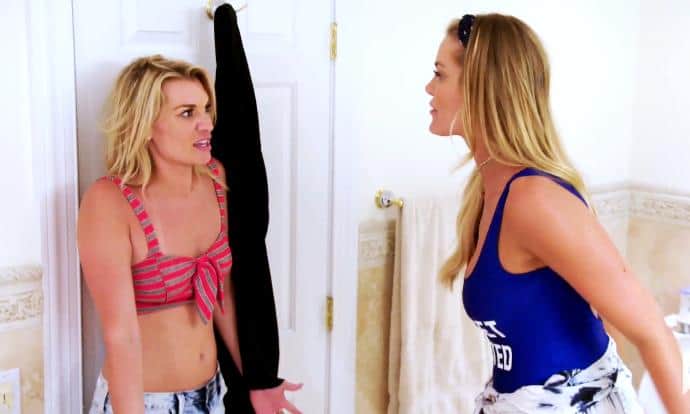 THANK GOD Summer House picks up right where Lauren smashes the cake and makes out with Carl. Nothing says America’s birthday quite like that! Just when I thought it couldn’t get any more cringe-worthy, Lauren whips out her boobs and dances in a circle, throwing out one liners like, Carl “deserves a KICK in the face.” GET IT?! GOOD ONE.

Carl is annoyed about getting caked and Lindsay decides that RIGHT NOW would be a great time to discuss how heartbroken she is still about Everett, her ex. Carl listens to Lindsay get all emo and all I can think about is hot he must be because he is wearing a SWEATER (aka his chest hair). Lauren enters mid-Everett chat and tries to steal the attention. Lauren thinks Lindsay was talking smack to Carl and nothing can change what she thinks. Lindsay tries to explain the Carl-convo, but Lauren is wigging out in the bathroom with Lindsay. I can’t even keep track of what Lauren thinks or is saying and I think it’s about time homegirl eats some pizza rolls and goes to bed. It seems as though these girls have taken a one way ticket to hot mess express land.

Riddle me this: why are Lauren, Carl, and his sweater in a Jacuzzi at 6 am? Are they still drunk? Are they hooking up? It’s all a mystery, mainly because I couldn’t follow Lauren’s drunken tirade from the night before. All I know is that they wind up in bed and there seems to be some moving under the blankets.

The next morning: I can smell the hangover through the tv. Danielle, Lindsay, and Amanda begin the clean up phase and I am not jealous. Everyone begins piecing together the events from the night before and Lindsay shares that she made out with Amit. Amit, however, adamantly denies that he made out with Lindsay. Do these people forget that they are on TV and being filmed? Can’t hide the video tapes, Amit…

Somehow, the whoooole gang cleans up enough to head out on a boat. My question is, who finished cleaning the house?! Poor Captain Rob and Captain Spencer are stuck boating around these sloppy trolls. These “grownups” moon each other and drink heavily, and wind up on a rocky beach where they set up an awkward picnic. Lindsay and Lauren try to sort out their drunken fight and Stephen and Danielle decide to walk away from the circus and enjoy the view. Danielle admits she “kinda blew it” with Lauren by calling her out for the Carl make out, but Stephen points out that Lauren has “bigger fish to fry.” The blondes go back and forth and it is a total buzz kill, particularly because neither one of them know EXACTLY what happened. I am THIS close to saying, “shut up about it and then hash it out on the reunion episode.” Amit, I hear ya- “sh*t-show island.”

Kyle claims that the day is ruined and that this “group has been impossible.” I vote to kick Carl off of the island. Him and his sweater. Would make for a more drama free house, but alas, where’s the fun in that?! The housemates clean up (siiiike a cleaning service is coming) and the black SUV’s head back to NYC for a three day work-week. Back in the grind they go. Except for Danielle. She got laid off of her job and feels like “she is wasting her life.” She seems super smart and likely to nab a new gig…as long as she stays off that Carl-coaster.

“JULIO,” pronounced JEWL-I-O, is a buddy of Kyle’s. Kyle heads over to his crib in hopes of finding an investor for his new company. Kyle explains that he is looking for a minimum investment of $25,000.00 and it seems like big JEWELIO is gonna hook a brother up.

Unfortunately, a three day work week means these people get to go back to the house sooner rather than later. The awkwardness lingers and Stephen is jealous of Amit and Carl. “There couldn’t be anything uninspiring than this budding romance.” #friendstealer. Amit explains that he would be PePe Le Pew and Carl would be the Tasmanian Devil. Besties!

Sag Harbor is where they all end up for the night. PRAY for a drama-less evening of shots and margaritas. Single Lindsay is on da prowl and is not ashamed of it. There is NO chance of her making out with Amit tonight, as he snuck out of the bar with three girls and headed back to the house for a night of swimming.

Four hours later, the housemates return and Amanda expresses her disappointment with Kyle. She explains that Kyle is “fun, drunk Kyle” to everyone else, but to her, he is nasty. I don’t blame her, considering he denied any “live-in” relationship from occurring during the week and they really only have the weekends to work on their love. Good plan, guys.

Danielle is desperately trying to create a “bonding experience” with this crew and therefore brings them clam hunting with the Shinnecock tribe. Of course not everyone comes, but it is really funny to watch Lauren pretend to be “outdoorsy” and Stephen suck down clams, and then say, “It’s safe to say that all types of clams are off the menu for me.” The rest of the housemates straggle up to the beach with a cooler of rose and drama. I just hope the b*tching blondes can make up already. It’s giving me a headache and I am beyond thrilled to see them apologize.

I think everyone owes Danielle a thank you for the “pow-wow,” cuz “this is the most zen” Lauren has been in days. The young blood singers from the Shinnecock nation break out into drums and song and dance and it seems as though all will be well in the summerhouse tonight. Maybe.