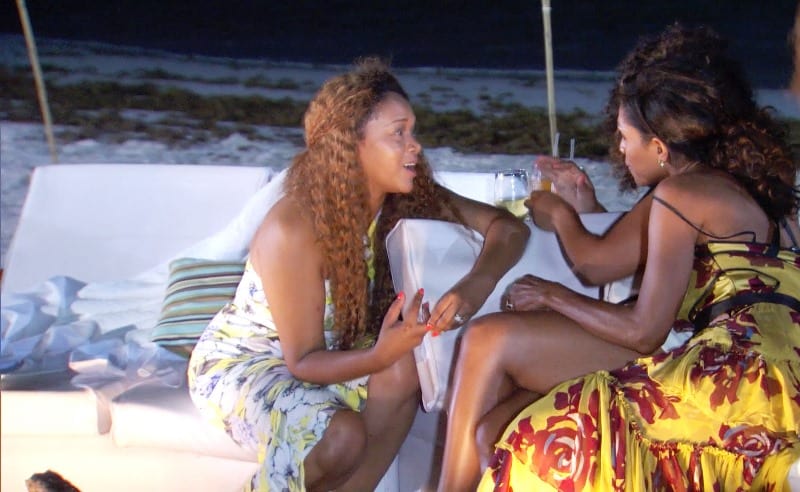 This season of “Married to Medicine” has been an emotional whirlwind. We’ve seen these ladies go through a lot, and last night, they laid it all on the table.

The group was still in Barbados on their annual couples trip. They take the trip to strengthen the bonds of their marriages and friendships, and they mean well. I think.

Heavenly, bless her heart, was the hostess for this trip, which meant that she got to plan all of the activities. For reasons that aren’t completely clear, Heavenly fancies herself a “relationship expert” these days, so she took her role very seriously.

The lunch she planned for the group on the water was lovely, until Mariah pointed what she felt was an obvious “double standard” in regards to the way the others treated Quad.

According to Mariah, the others “baby” Quad because she’s so “sensitive”. The others agreed with Mariah. Quad did not.  So, because there’s really no better way to prove that you’re not an overly sensitive baby than screaming your head off, Quad went off on an expletive laced rant, insisting all the while that they were wrong about her.

Luckily, the ladies didn’t argue for long, and were soon laughing about it all. And it was nice that they had that moment, because things were about to take a decidedly dark turn.

The couples all get pretty personal on these trips, but this year, some of the marriages are in serious trouble. They were already anxious about an exercise Heavenly had planned called “The Circle of Truth”. I swear I played this game at a slumber party in 5th grade.

Basically, this involved the couples  sitting  face to face, and talking about the most personal and painful  issues in their marriages, while the others watched. And as excruciating as that sounds, it got worse.

When the couples arrived on the beach, Heavenly announced that she would be asking questions of the couples to help facilitate the conversations. It also sounds like a great way to facilitate getting all up in your friends’ business, but that’s the same, right?

Toya was skeptical about this new twist right away, and asked who would be asking the questions when it was Heavenly and Damon’s turn. Heavenly then informed her that she and Damon wouldn’t be participating. Doing so would “selfish”, she explained,  because their marital issues were so “minor”. Well, lah di dah!

And she wielded that power with an iron fist, first calling Dr. Jackie and Curtis to the circle. She began by telling Jackie to ask Curtis what “she” did for him that Jackie didn’t. “She” being the wonton hussy that Curtis was having an affair with.

Now, you know Curtis doesn’t do well when he speaks off the cuff, but, damn it, he really tired it anyway. He said that it  wasn’t about what the other woman did, or didn’t do, because she could never measure up to Jackie, no matter what. Ok, Curtis that’s actually good, stop talking now.

But he just couldn’t help himself. Curtis went on to say that the affair had been “miscalculation” on his part. Ugh! Curtis has a way of talking about his affair as though it was something that happened to him, and not something he actively participated in.

Heavenly had a question for Curtis to ask Jackie too: “why do you act like you don’t care?”  This was rough, and maybe even mean. Since Curtis’ affair had been discovered, Jackie was shocked and hurt that so many members of the public blamed her for Curtis’s affair, saying that her “cold” demeanor had driven Curtis to it.

Jackie assured Curtis that she did care, and she broke down crying as said that she hurts like everybody else. Being so pulled together and stoic can’t be easy, and showing any vulnerability is clearly difficult for her. But as painful as it was to watch her sobbing, it had to be a relief for her to fall apart…just a little…and just for a second. She went back to being strong, unbreakable Dr. Jackie in moments.

Once the group had finished consoling Jackie, it was Toya and Dr. Eugene’s turn. And boy did Heavenly have something in store for them! She asked Toya to  explain why she “disrespects Eugene in public”. Ouch!

This is not the first time Heavenly has made this statement about Toya’s treatment of Eugene. And granted, Toya does have a habit of teasing Eugene about personal matters in mixed company, such as his lack of interest in their sex life. But Eugene has always seemed to take the jokes in stride, and assured Heavenly that he didn’t feel disrespected at all.

But Heavenly just kept pushing, asking Toya if she was really happy with Eugene, or was it “just about money”. This was pretty bold, and Toya and Eugene were both visibly annoyed with  Heavenly, and the implications of her questions.

Toya told her that she wasn’t a good relationship expert, and that her questions were rude and disrespectful, particularly since she refused to participate, herself. And then Toya looked at  her husband, and without skipping a beat, said “we’re good, right, Daddy?” Everybody knew this was  a direct hit at Heavenly, and her annoying and somewhat creepy habit of her  husband “Daddy”. It was perfect, and the others could barely contain their laughter.

Next up was Simone and Cecil, and when Heavenly asked Cecil if it was fair for him to invest his and Simone’s money into businesses without her, he got angry fast, and started yelling about how this was an old discussion that didn’t need rehashed, and that Simone hadn’t told him before buying her Mazzeratti, so what wasn’t the difference?

He stormed away, and everyone was pretty shocked at such a vehement reaction, as Cecil is generally  a pretty calm guy. But mostly everyone was starting to get angry with Heavenly for bringing out the worst in them with her twisted little game.

But Heavenly still wasn’t finished. She had some questions for Quad and Dr. Greg first. She asked Greg if he appreciated his wife. These two have been in a bad place all season, and Quad has blamed their problems on Greg’s lack of appreciation for all she does for him. Things got heated pretty quickly between them, and in no time they were on their feet, toe to toe, screaming in each other’s faces.

This wasn’t working out as planned for anyone, when Greg began to calm down, he told Heavenly that while he understood what she was trying to do, all she’d done was “open a can of worms without a real plan for closing it again”. Spoken like a true psychiatrist. Perhaps he should host the trip next year.

The others jumped on the bandwagon, and began yelling at Heavenly about her intrusive questions. But luckily for her, Damon came to her rescue, and smoothed things over with the others, saying that Heavenly might be a “relationship expert”, but she still had things to learn, and had only been trying to help. And since Damon is a sweet, teddy bear of a man, the others found it impossible to stay angry. But there was one more explosive revelation.

Mariah confided to Jackie she’d been where she was, and had dealt with infidelity in her own marriage. That’s right! Dr. Aydin had an affair of his own.

Jackie was shocked! Aydin and Mariah had always seemed happy, but it just went to show that all hope was lost, and that her marriage to Curtis could be salvaged too. She seemed genuinely relieved as she allowed herself to relax back into Curtis’ arms.

The couples seemed happy and relaxed as they prepared to leave Barbados, but stay tuned! Next week brings another dinner and another fight among the ladies, with Quad threatening to never speak to Toya again! But remember, she’s NOT overly  sensitive.

TELL US – WHAT ARE YOUR THOUGHTS ON THE LATEST MARRIED TO MEDICINE EPISODE & RECAP?