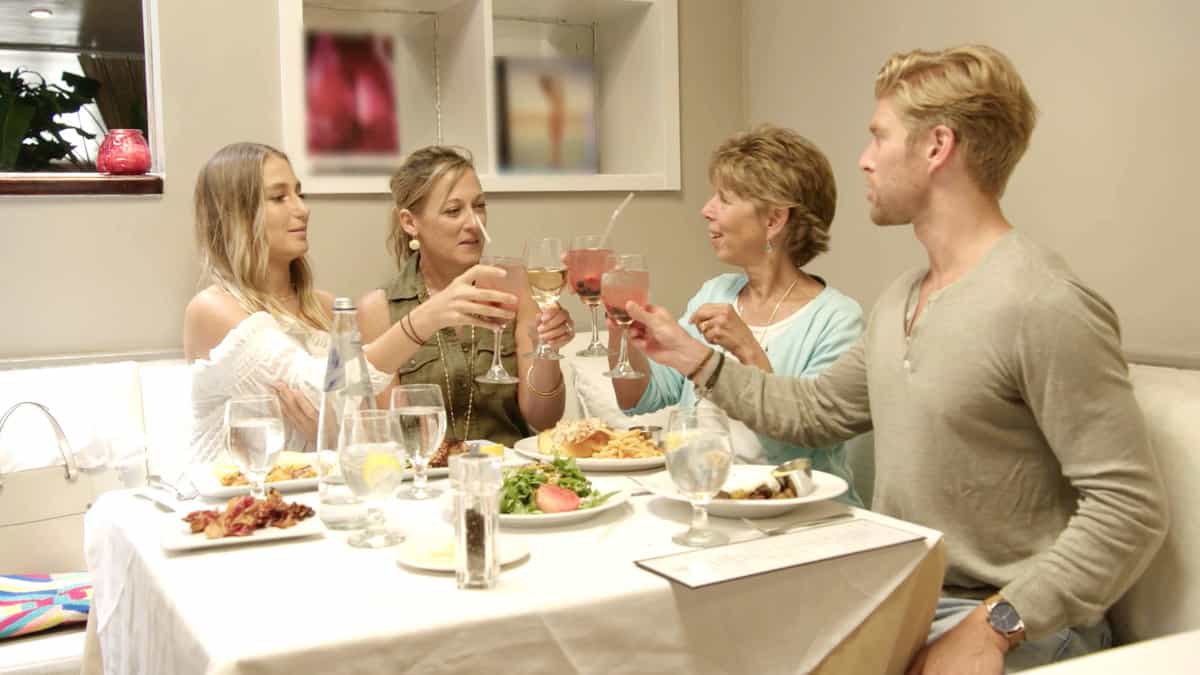 You know what’s NOT a good idea? Having everyone’s moms (and aunt) come to a rental house full of drama and toxic relationships…Yea, no. The Summer House crew should certainly know better…

Picking up right where we left off and setting the scene. A dark bar. NYC. Stephen, Ashley, and Carl. Stephen’s bombshell accusation: Carl stated the best head he ever had was from a man. Member? Wellllllllll. Now we have the answer. “I was 22. I was having a three-some with girls and a guy got in the middle of it.” Carl states that he is straight and confident in his sexuality. Stephen claims that he feels like he doesn’t really know Carl. Stephen and Carl are equally angry and confused and annoyed and Ashley is just like…uh what just happened?!

In other news…to change up the mood drastically, this weekend at the summer house is deemed “Momtons.” Carl is just letting it all hang out this episode. He is a self-proclaimed momma’s boy and is pumped to have his newly divorced momma join in on the fun. In the car with Lindsay and Carl heading house-bound are Carl’s mom and Linday’s Aunt Rhonda. Lindsay explains that her aunt is her mother figure and has stepped into that role. The four of them travel together in hopes of an epic weekend.

Meanwhile, the triplets, I mean twins, are the first to get to the house for the weekend. Clearly Momma Wirkus borrows her daughters’ clothing. She looks JUST like Ashley and Lauren. You go, girl. Car number two arrives to the house and Carl’s mother and Momma Wirkus embrace, causing for an awkward exchange amongst the roomies. Everyone saw that, right? Stephen explains that he couldn’t invite his mom because then he would have to censor himself and not be as fabulous as he always is.

Amanda and Kyle share with the group that their mothers will be joining the gang tomorrow. To make matters more risky, this would be the first time Kyle’s mom and Amanda’s mom are meeting. Let’s hope everyone gets along…otherwise, maybe Kyle will take back the apartment key!!!

The moms stick around for a bit giving sage advice and throwing out funny sayings such as, “When the bus has lost control, get out the way” (Momma Wirkus to Lauren in regards to Carl) and Carl’s mother referring to Momma Wirkus as “Just a kick and a half.”

Sidenote: Danielle, the phantom roommate, and Amit have decided to avoid Momtons. I think they are the smartest ones in the bunch for dodging the inevitable sh*t show. I mean, why would they ever want to miss out on teaching the moms beer pong?! Lauren and Carl’s mom team up (because let’s make it awkward) and they are actually giving their opponents, Carl and Kyle, a run for their money.

Aunt Rhonda, Lindsay’s aunt (aka spirit animal), are as close as close can be and Lindsay explains her “summer of single f*cking Lindsay” to her. She even shares the voicemail that Everett left her. In the message, Everett is legit kissing the phone and professing his love to Lindsay. Aunt Rhonda just wants Lindsay to be happy and I just want single Lindsay to find someone so she can stop complaining.

Later, Carl has a heart-to-heart with mother. They discuss how the divorce is just about final and we find out that Carl’s dad is moving out and marrying another woman. Carl better turn his womanizing around…if not, he may find himself in the same boat down the road.

Once the moms and Aunt Rhonda head out to a safer slumber area, the crew decides to go out cuz it’s Friday. Everyone is amped about heading out…everyone but Carl…who is busy face timing some chick. This, of course, sets off Lauren because…she has no good reason other than that she “gave her heart” to him. I don’t even like Carl, but he did say he wasn’t looking for a relationship with Lauren. While I do understand Lauren’s fury, why oh why is Stephen all up in this drama?! Lauren and Stephen try to make it a Carl witch hunt by holding an outdoor meeting. Thankfully, after letting loose and having many drinks, it appears as though everyone (sans Carl) can still have a good time together.

The next morning, Kyle gets up and at em to scoop up Jane, who is adorable. “Jane Cooke is a legend” and I pretty much wanna be her BFF. She talks to her son about sex and toothpaste and makes hilarious connections. Jane knows Amanda already, but she does not know Amanda’s mother. This is gonna be an amazing blind date.

Meanwhile, Lindsay heads poolside to have a chat with Carl. She is trying to get to the bottom of what happened with Lauren last night. Carl refers to it as the “Wirkus machine gun” and can’t quite understand why Stephen is right there fighting on Lauren’s team. Lindsay explains that maybe Carl should re-evaluate his friendship with Stephen and Carl states that he wants to “table” the whole “head” rumor. I don’t blame him for not wanting to chat about it…

Kyle, his mom, Amanda, and her mom head out for a late brunch. They are all the cutest and it seems like everyone loves each other. I am slightly confused if they are ALL staying in that one bedroom, but I guess after too much rose anything is possible? Jane, Kyle’s mom, makes it seem like this relationship is pretty serious if he’s making the mothers meet and he’s giving his key to her. All in all, it seems like a successful mom-meeting.
Back at the house, the entire Wirkus bunch bounds in. There hasta be 45 of them. Good thing Lindsay’s Aunt Rhonda is leaving- now that the Wirkus circus is back in town, there is not enough room for everyone.

Stephen calls for a Momma Wirkus meeting in his room. The two sit criss-cross-apple-sauce on his bed and Stephen just gets all emo. He talks about how upset he is with Carl, how his parents were disappointed in his coming out, and how his fam thinks he cannot act on his feelings. Stephen explains that his life is terrible and Momma Wirkus tells Stpehen to “risk it.” She gives him a pep talk…similar to the one she gave her daughter Lauren the night before. She’s a pro at this momming thing.

Later, Carl goes to see Lauren and asks her to “table” their issues on a count of the family visitors. Carl really likes “tabling” things, huh? That’s the second time this episode he has said that. Good thing everything’s tabled. Can’t have drama during the Mexican fiesta with the families! Everyone’s getting pretty smacked up (ie. Aunt Rhonda cha-cha-ing in the doorway of Carl’s mom’s room) and the show ends on a legitimately emotional note. Carl’s mom breaks down in Carl’s arms re: her divorce and it is upsetting to see. I feel so bad for her. It is heartwarming to see Carl be nice to a female for once in his life and it is refreshing to see that side of him. I just wish the episode ended with some sort of fruit getting smashed. It would have just felt so symbolic and right. Sigh. There’s always next week…

TELL US – THOUGHTS ON THE SUMMER HOUSE RECAP AND LATEST EPISODE? DOES LAUREN HAVE A RIGHT TO BE UPSET WITH CARL?