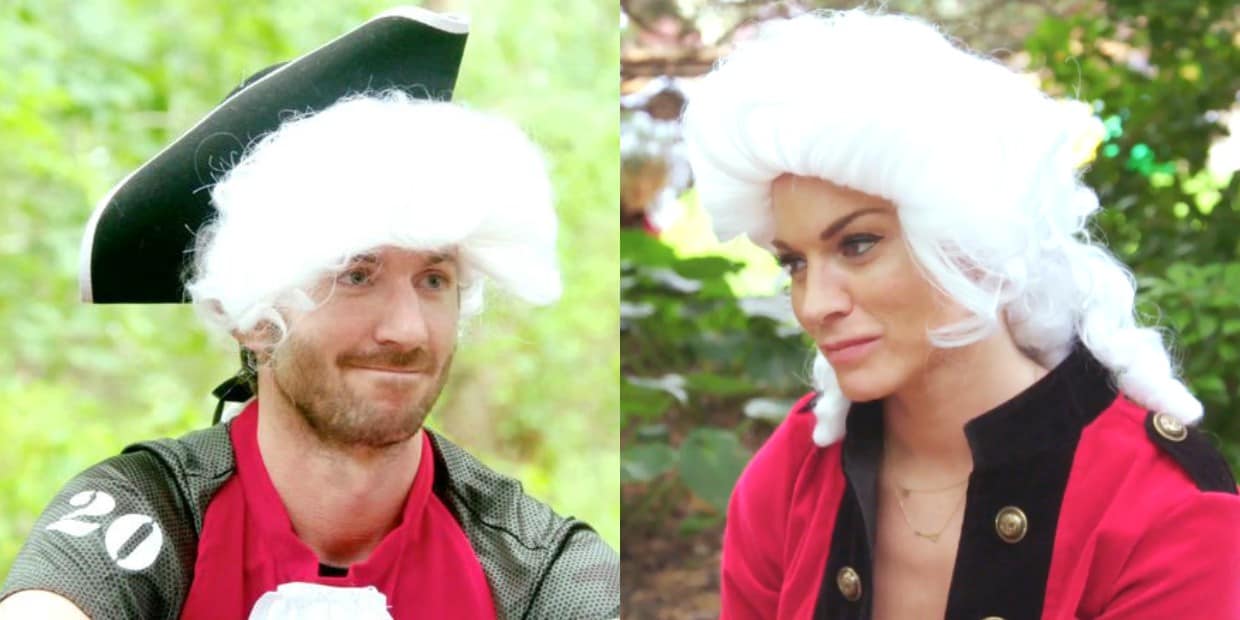 They say you get wiser with age…but it seems to me that doesn’t appear to be the case with this Summer House group.

Kyle’s 35th birthday continues…somehow. Kyle states that his “expectations have been exceeded” because what 35 year old doesn’t want a blow up pirate ship at his backyard bash? It’s all fun and games until Everett, Lindsay’s ex rolls up. I can see why she’s so hung up on him, especially seeing him in that red coat and white wig. #Smokeshow-siiiike.

The crew is experiencing second hand embarrassment as Lindsay and Everett pow-wow in the woods and talk relationship…Everett tries to butter Lindsay up…and the next thing ya know, Lindsay is asking him to “f**k her…just a little bit. Just the tip.” Well that escalated quickly.

Speaking of escalating, the pool party has reached a new level as massive amounts of tea spilled into the pool have begun to taint the water. Lindsay straddles Everett, Amanda sings happy birthday to her “mature” boo, and according to Kyle, it’s like “being at a 7th grade dance and he just touched his first boob.” It seems like everyone’s love connection is successful, even Stephen’s. Who knew that costume parties were the way to people’s hearts?
But the rainbows and butterflies can only last so long.

Lindsay goes from being lovey-dovey to super angry in a heartbeat because Everett is “chillin with his boys.” She hollers at Everett and tells him “you better bow to my f*cking feet.” Amanda tries to talk sense into Lindsay, but it’s just not likely that anyone will get through to her when it comes to Everett. Lindsay is certainly not making a good case to Everett as she looks like a psychopath and probably scared him away completely.

While the crew hunkers down for the night, Stephen sneaks out for an escapade with his new boo. The house is in shambles. The pool is ready for some milk and sugar. Anddd the gang is struggling. Everyone is pulling it together for the sake of the house, but Lindsay is making things super uncomfortable for everyone. Kyle breaks the ice and Lindsay explains to him that “a lot of emotions go through me when I see” Everett. Like THAT’S an excuse! Kyle calls Lindsay out…she apologizes…and they all pack up their lives cuz it’s Monday, ya’ll!

Back in NYC, we get a glimpse of Kyle doing push-ups, Carl going “hard after the numbers,” and Danielle’s mom and brother. I love her mom. She cooks for her daughter and prays for some grandkids. What else could anyone want?!

Speaking of family, Stephen heads back home to Alabama to visit with HIS fam. They seem like nice, simple people who are VERY excited to be on TV, oh and to see their son, too. Stephen’s dad, Cletus, (so good) and his mom run through the family updates. The sister’s moving out. The brother’s going to school. And they’re going to FAT BOYS for dinner…with grandma and grandpa. How good is this?

On the way back to the Hamptons to celebrate Lindsay’s birthday, Kyle shares that he has “a love letter for Lindsay from Everett” and flowers, too. Seems as though Everett wasn’t scared away by Lindsay’s meltdown and wants to come back for more than “just the tip” this time. Side note: AMIT! I forgot about that guy! I think he’s got the right idea…he kinda comes in and out keeps a low profile.

When the birthday girl gets in the Hampton-bound van, she apologizes right away for her behavior last week and just wants to have a good time. Therefore, the fun ensues. Everyone’s making out, flashing each other, ya know, just your average ride up to the Hamptons for “Habana nights.”
By the time they make it to the house, everyone is pretty much a hot mess. “The fact that I’m dating a man that’s acting like a child is just a little embarrassing.” You’re only JUST figuring this out now, Amanda?! Yikes. Once inside the house, Lindsay begins barking out orders for her birthday party. Surprisingly, everyone kinda rallies and takes her directions, despite being super drunk. Amanda is getting to the end of her fuse with her immature boo and I can’t blame her, especially after seeing him pee in a bottle …………..for a second time.

Over in Alabama…Honestly, I will never forget Stephen driving a tractor and rocking a bee suit. This segment so perfectly counteracts the Hamptons shenanigans and I would totally rather be hanging with Cletus over at Fat Boys. The whole gang’s there. It seems to me that it’s about time his family start acknowledging Stephen’s lifestyle. If they can accept his brother’s terrible haircut, then what’s it to them to pat Stephen on the back once in a while and ask about his dating life?

In Hampton-land, Kyle decides that he should just “rip some shots” with Amit because he is annoyed with Amanda. Kyle explains that he is freaked out because Amanda “is the unicorn” and he’s afraid to grow up, but it appears as though no one in this house wants to grow up. I mean, did you SEE Carl’s cool hat?! Correction: everyone’s cool hats?! As it turns out, super drunk people can put together a pretty damn good Habana nights rager, complete with empanadas and of course, tequila.

Three sheets to the wind Kyle falls up the steps as he tries to deliver flowers to Lindsay, the birthday girl. Ya know, the flowers Everett sent to Lindsay. Smooth. Lindsay is not impressed and wants to throw the flowers over the railing and right into the tea-pool. Suddenly, everyone’s yelling, Lindsay’s p*ssed, and Kyle is drunkenly “coming at Lindsay very aggressive.” It’s all very dramatic. BRING BACK STEPHEN.

Ah Stephen. Reminiscing with his mom whilst wearing his childhood raccoon cap. His parents tell Stephen that they are proud of him for moving to NYC and for being successful out there. Stephen looks like he is bearing the weight of the world as he tells his parents that he doesn’t “choose to be gay” and that he wants to make them be a part of his life. He shares that sometimes he feels “on his own” and the convo gets pretty heavy as his mom says Stephen “chose to be gay.” He cannot fathom how they aren’t able to accept him based on their religious values and I’m starting to tear up. Poor Stephen. I say make Cletus wear the coon cap for some comedic relief and bring in the leftovers from Fat Boys!