The Real Housewives of New York Recap: Wiggin’ Out! 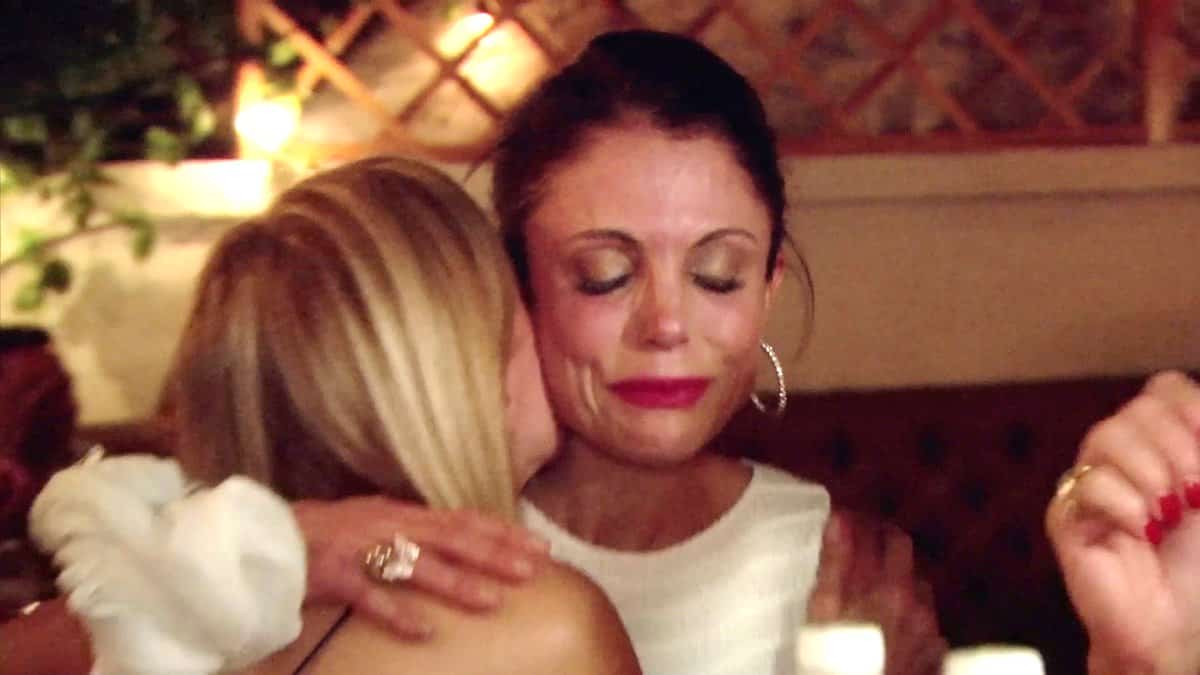 When will the ladies of The Real Housewives of New York stop traveling together?! It never goes smoothly, they always fight, and surely it all must be exhausting.  But the ladies’ trip to Cartagena, Colombia may go down as the worst in housewife history! The episode was a wall to wall mess..here’s how it all went down.

For starters the ladies seem to have divided into two separate camps: Bethenny, Sonja, and Luann vs. Carole, Tinsley, Dorinda, and Ramona.  This is mainly due to the chilliness between former besties, Bethenny and Carole, which has caused the entire group to “lose their mojo,” as Luann pointed out.

As team Bethenny made their way from the airport, they recalled the speed dating event they all attended during last week’s episode, and Bethenny mentioned that Brian, aka, The Guy in The Red Scarf, had been calling and texting constantly, begging to see her.  She’s known him for a while, and even went out on a lunch date with him a while back, but didn’t exactly feel a spark.

Ramona, on the other hand, seemed quite taken with him when they spent time together, and had mentioned to the other ladies that they’d gone out for drinks after the speed dating event. But Bethenny told Sonja and Luann that Brian’s version of the story was a little different.  According to him, he’d gone out for drinks with other friends from the event, and had run into Ramona, who he claimed abandoned her Uber, and jumped into his car!

Bethenny said that she told him that any contact with Ramona was a “bad look,” and continued to blow him off.  But there was something about the way she was telling the story that was just mean spirited. She was laughing at Ramona, and encouraging Luann and Sonja to do the same.  Talk about a bad look! In that moment, she just seemed…bitter.

And why be bitter when you’re jetting off to Colombia? Well, to make everyone else miserable, of course. It seemed to be Bethenny’s goal from the very beginning, and it was a rousing success! For starters, she wasn’t all that happy with the house they were staying in. She would have preferred a resort. But Tinsely made the arrangements, so they stayed in a home that was quite beautiful, but somehow not quite up to Bethenny’s standards.

And it was a pretty selfish attitude, considering that Tinsley pulled out all the stops to ensure everyone’s comfort and avoid any of the usual issues.  She even found a fun, albeit, expensive way for the women to choose their rooms, a decidedly non-issue that has led to more than a few scuffles on past trips. She gave each woman a silver necklace from Tiffany & Co inscribed with their initials to determine who would sleep where, and miraculously, once jewelry was involved, none of the women cared which room they were in.

Scott went all out for Tinsley too.  He sent her entire glam squad with her so that she wouldn’t have to do her own  hair and makeup while she was away. It was a bit extravagant, but hey, it was Valentine’s Day weekend, and Scott knows the way to Tinsley’s heart.

As the kitchen staff was preparing lunch, Ramona wandered in to inquire about the menu, and to instruct them not to add any butter to her dish, explaining that clean eating was her secret to staying “ageless.” The poor chef just looked at her like she was crazy..and likely proceeded to put a pound of butter in her dish!

But Ramona was so busy worrying about the butter that she completely “forgot” that Bethenny is allergic to fish, and didn’t bat an eye when she was told they would be having fish stew!

As the ladies dug into their meal, Bethenny began to feel strangely, and asked if the stew contained fish. When Tinsley confirmed that it did, the real theatrics started! She clutched her throat, left the table in search of Benadryl, and proceeded to lie on the floor of her bathroom in agony. Oddly enough, none of her “friends” seemed particularly concerned, and went on eating and talking about how much they loved their new necklaces.

Despite her dramatic reaction to the fish, Bethenny managed to rally in time to join the ladies for dinner.  Her stomach was better…her attitude not so much.  Although, as the ladies gathered in the courtyard, it was hard to blame Bethenny for giving them the side eye. The outfits were HORRIFIC! It was just a whirlwind of bad decisions. Dorinda was wearing black gladiator boots with a printed sun dress; Ramona, who was in a wheelchair due to an ankle injury, was wearing a dress with martinis all over it; and don’t even get me started on whatever the hell Carole had on! I don’t even know what that was.

Even The Countess took a risk. She came down in a skin tight white dress and a long, blonde wig! She said she felt she was channelling Sofia Vergara, although, I thought she looked more like Kim Cattrall from Sex and the City. But, hey..either one is good, and Luann actually pulled the look off pretty well.

After the ladies waited a while for Ramona, who got stuck on the elevator, they made their way to the restaurant, and that’s where things got interesting! Once again, the ladies began talking about the speed dating event, and Carole mentioned that she’d gone out to dinner with Brian, after her friend called, and told her he was interested in her.

Despite Bethenny’s earlier claims that she wasn’t interested in Brian, she clearly wasn’t pleased that Carole went out with him, and wondered why she hadn’t mentioned it to her before, since she knew they knew each other. When Carole addressed Bethenny, and referred to Brian as a friend of hers, Bethenny said he wasn’t her friend, and went on to imply that he was “running a game” on Carole, and could even be “Tom 2.0,” considering that he was trying to date two of them at the same time.

Luann and Sonja agreed, but Team Carole thought Bethenny was way out of line, and pointed out that it had just been one date. But Bethenny’s problem was with Carole, who she said was acting “smug,”  as though she’d “won a prize,” but that it was really a just a “consolation prize.”

Carole was stunned by Bethenny’s reaction, and said she had no idea where all the venom was coming from. She told Bethenny that “it wasn’t that deep,” but for Bethenny it was.  You see, this had absolutely nothing to do with The Guy in the Red Scarf.  Bethenny was angry because of her rift with Carole, and because she’s so jealous that Tinsley has taken her place that she can barely see straight, much less act like a normal person.

As the two women argued back and forth, the other ladies just looked on, not surprised, as this seems to happen every time Bethenny and Carole are in the same room these days, but just sad and tired of listening to them.  Bethenny declared the dinner “hell,” and bemoaned the fact that she’d never get the minutes she’d spent arguing with Carole back.

After leaving the restaurant, the women, once again, split into their separate cliques. Team Carole was headed out to enjoy the nightlife, while  Bethenny announced that she just wanted to go back to the house. She watched sadly, as Carole took off with the others without so much as a backwards glance in her direction, and snarked to Luann and Sonja about what a “motley looking crew” the other four women made.

In the meantime, as Team Carole was walking away, they wondered how the evening hadn’t gone so wrong. And Dorinda felt she had the answer. She said Bethenny didn’t like it there, and might even go home. Tinsley said if that’s how Bethenny felt, she could just go!

After Luann suggested that she, Sonja, and Bethenny go out, they eventually met back up with the other women. Almost as soon as they sat down, more trouble ensued.

Tinsley told Bethenny that she’d heard she was upset about the trip and the accommodations, and encouraged her to “give it a shot.” Bethenny knew immediately that Dorinda had told Tinsley how she felt, me admonished her for repeating what she’d told her in private.

Dorinda said that it was obvious to everyone that Bethenny was miserable, and said that she’s hadn’t realized that what Bethenny had said was “unshareable.” But Bethenny wouldn’t be deterred by reason and logic.

She accused Dorinda of repeating everything she said, and talking behind her back. Dorinda assured her that when it came to important things, she’d never break a confidence, but that this really wasn’t that serious.

With the night thoroughly ruined, Team Carole made their way out of the bar, and Bethenny began to cry, saying that she didn’t like  “not liking Carole,” and felt like she was in “The Hunger Games,” a movie she’s obviously never seen.

The following morning, Bethenny spoke to Tinsley, and apologized for the night before.  She explained, again, how difficult it was for her to not be getting along with Carole, and added that she was also stressed about moving and her custody battle with her ex husband, Jason Hoppy. As she began to cry again, Tinsley looked a little embarrassed, and told her she was sorry things weren’t better.

When the ladies sat down for breakfast, conversation turned to the fact that it was Tinsley and Scott’s anniversary, and right on cue, and enormous heart made of 365 roses for the 365 days they’d been together was wheeled out by the staff, and Carole announced that Scott had asked her to bring along another gift for Tinsely..a beautiful bracelet.

Bethenny exclaimed at the beautiful gifts, and congratulated Tinsley, but abruptly left the table.  She explained during her interview that she was jealous of Tinsely, and would like to “come back as” her. As she began to calm down, the ladies started planning  a shopping to go shopping, nut just before they left, Bethenny melted down completely!

She said she believed that she was having a panic attack.  She was crying hysterically and uncontrollably, explaining again why she was so stressed out, this time including the fact that her restraining order against Jason would soon be ending, and she was scared about how things were going in her life.  Dorinda tried to calm her down, but it was no use…she was too far gone.

As I said…a wall to wall mess! There’s more drama to come in Cartagena next week..in fact it’s a twofer.  The ladies will attempt a an amazing feat: two fights simultaneously.  Carole and Bethenny will be at it again, and while they duke it out, Dorinda and Luann will argue, as well. And it’s the Dorinda/Luann showdown that promises to get really ugly, as Dorinda tells Luann to “have a drink!” Stay tuned!