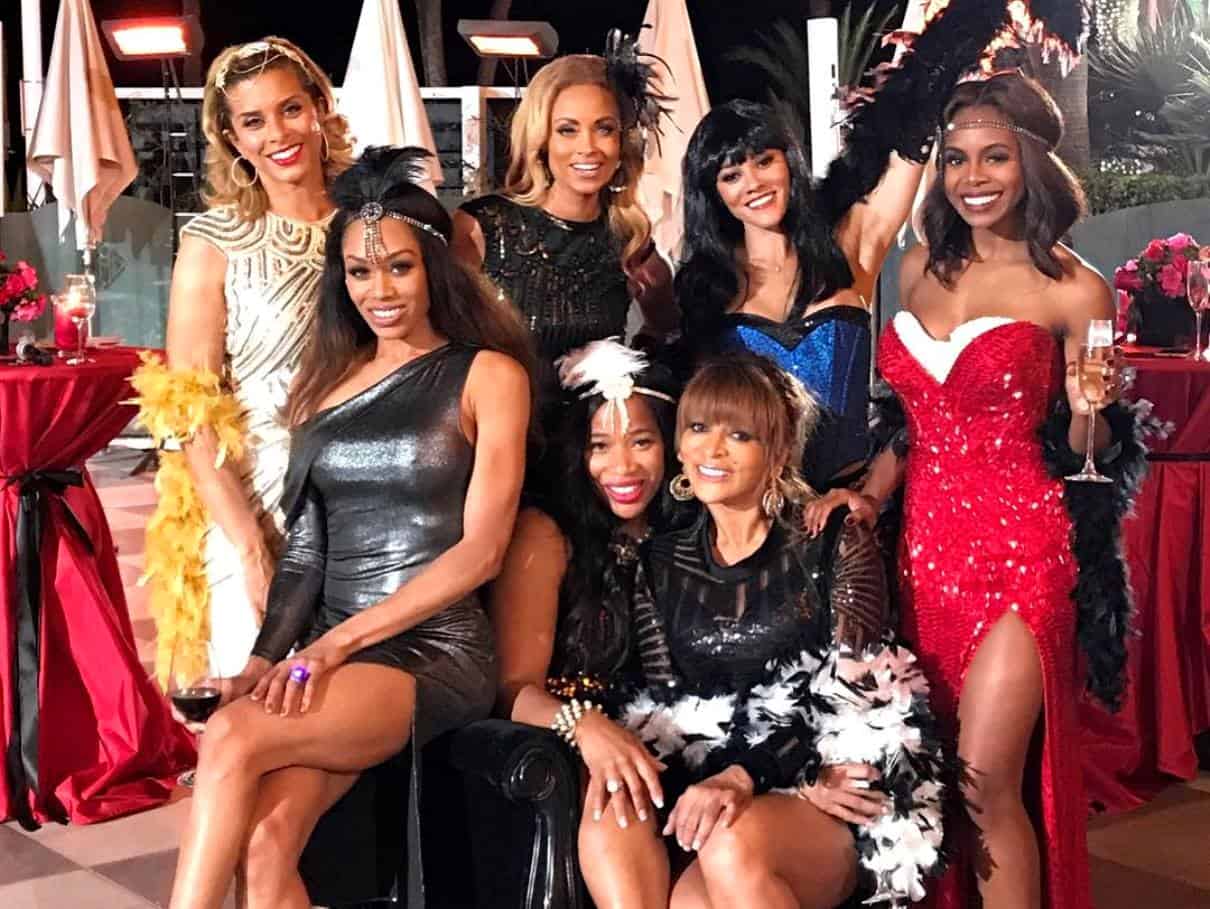 The ladies of The Real Housewives of Potomac wrapped up their trip to the South of France in last night’s episode, and they actually managed to end on a high note, with the exception of a few hiccups.

When we picked up with the ladies, Monique and Gizelle were still in the middle of their breakfast sit-down, and Monique was still trying to pass all the blame for inviting Kyndall Douglas, Gizelle’s former boyfriend’s ex wife, to her charity event onto Charrisse.

She’d thrown Charrisse under the bus at dinner the night before, when she’d told Gizelle that Charrisse had been the one who had wanted Kyndall to start “coming around” again, and that it had likely been because she was still angry with Gizelle for the rumors she’d perpetuated about Charrisse’s alleged affair with a firefighter.

Gizelle said that Monique had “taken her shot, and missed,” but Monique disagreed, and said she’d merely “cocked back the trigger,” but then changed her mind, and even that was only because Charrisse was her girl, and had been clear about the fact that she wanted to get  Gizelle and Kyndall in the same room together, in hopes of an awkward encounter.

But Gizelle wasn’t buying it.  She said Monique couldn’t put it all  on Charrisse, and needed to take some responsibility for her own actions and decisions.  She also assured Monique that Kyndall’s presence didn’t intimidate her in the least because she was the “baddest thing going.” However, she also said she knew that Monique and Charisse had purposefully set out to hurt her, and for that reason, they’d never be close, but they could still “have pancakes and stuff.”

Monique realized this was the best she was going to get, and declared her mission to show Gizelle “another side” of herself  “accomplished.” The ladies ended their breakfast as friends, and all seemed to be forgiven..for the moment.

At her first opportunity to speak to Monique alone, Charrisse confronted her about her disloyalty and her insistence on deflecting the blame.  She also pointed out that Monique had invited Kyndall to her event all on her own, but Monique still refused to accept responsibility, and continued to say that she’d only been going along with what Charrisse had wanted.

In the meantime, Karen was working overtime trying to convince everyone how happy her marriage is, despite a flurry of recent rumors and accusations to the contrary.  As she poured the sommelier a glass of wine, she explained that such servitude was the secret to her 21 year marriage.

It was all a bit much, and, as usual, Ashley was all over it. As they began teasing each other on the way home, talk turned to money, and the women’s various businesses, and when Ashley asked whether Enterprise was Karen’s business, or her husband, Ray’s, Karen decided enough was enough.  She told Ashley that her marriage was an “Institution,” while Ashley’s was a “fake the world situation,” adding that Ashley looked “miserable” with her own husband, Michael.

Ashley said  Karen was the one not wearing her wedding ring, and reminded her that she had complained about Ray’s penis being “old and dried up.” Then she told her to “drop the facade,” pointing out that she and the others had been very upfront about their lives, while Karen was always lying and trying to make herself seem bigger, richer and more important than she really was, when in actuality she was just a “broke ass Tina Knowles!”

It was, perhaps, the most dead on description of anyone, or anything, I’ve ever heard in my life, and the other women thoroughly enjoyed it, cackling in the back of the car, as Ashley and Karen went back and forth. Karen retorted that Ashley would know all about being broke, since Michael had put her out of their  “sweatbox” of a home and “put her ass in a studio” during their separation last year.

Ashley continued arguing, saying again that Ray had told her he was moving to Florida with, or without, Karen.  Karen said the fact that Ray wanted to move to Florida was old news, and everybody already knew it, but that he wouldn’t be going without her.  She told Ashley to stay out of her “institution,” and “shove her fake marriage up her ass.”

And just before things could get any uglier, Candiace stepped up to tell Ashley to back off. Ashley said that Karen had told her things in confidence that she was now trying to deny, but Candiace pointed out that if Karen had said these things in confidence, Ashley shouldn’t be repeating them now, in the the presence of  the other ladies. She made a good point, but Ashley told her to stay out of it, and Candiace told her to “suck a d***.”

Well, that escalated quickly! But Candiace had pretty much had her fill of the ladies’ “mean girl” ways at that point.  She’s been trying to get them to take her more seriously all season, and they’re response is generally to either laugh at her, or blow her off, altogether.  It’s been weighing heavily on her mind, and last week Karen and Charrisse had given her a pep talk about sticking up for herself, and speaking her mind. And she’d tried, just before they’d left the vineyard, but they’d been too busy taking selfies to listen. She tried to point it out as yet another way they poo pooed her, saying it was rude to tell her to wait to be heard while they took pictures.

Candiace went on to say that she felt that the women had only seen one side of her, and were unfairly labeling her a “princess.”   Gizelle said there was nothing unfair about how they saw her because they’d only seen one side of her, and pointed out that the only one who considered Candiace a princess was Candiace, herself.  Poor Candiace! She just can’t get it right with these women, but her incessant whining does her no favors, whatsoever, especially with Gizelle.

As Candiace explained to her fiancee, Chris, these women can be “bandwagon bi***es,” meaning that she gets along with most of them just fine, but when Gizelle shows up they jump on her bandwagon, and turn on Candiace. When she tried to explain that to Robyn, she got no sympathy there, either.  Robyn said she liked Candiace, and felt like they’d had some good times together, but she and Gizelle had each other’s backs, and everyone knew that, and it wasn’t going to change.  To say they have each other’s backs is an understatement, of course, considering that Robyn and Gizelle have basically morphed into a single two-headed housewife, but I digress.

Later, when the women were enjoying a cruise around the Mediterranean on a beautiful yacht, the confrontations continued.  Ashley demanded to know why Candiace had inserted herself into her argument with Karen. But this time Candiace didn’t back down. She told Ashley that they “all had mouths,” and “all spoke out of turn,” and she wasn’t going to be called out for doing the same. And you know what? Ashley backed right down. Alright, I see you Candiace, these women many not eat you alive and sacrifice your soul, after all!

Back in the stern of the vessel, Gizelle wanted to know why Karen wasn’t wearing her wedding ring. I swear I have never seen grown women more invested in what another grown woman was doing with her life, her home, her money, her marriage, and now her jewelry, in all my life. I think Karen’s absolutely right..they ARE obsessed with her!

Karen said she always removed her ring whenever she traveled, and had done so ever since she’d nearly lost it during a mugging years ago.  The assailants got her necklace, but she’d had to act quickly to save her ring, slipping it into her “hoo haw” before they could see it.  The other women just stared at her in awe, at once disgusted and impressed by her stealth dexterity under pressure, until Karen explained that, for her, a “hoo haw” meant cleavage.

All the same, Gizelle wasn’t buying Karen’s story, pointing out that the South of France wasn’t exactly riddled with street crime.  But they quickly dropped the matter, and moved on to do some sight seeing, during which the women got along beautifully.

The goodwill actually even continued into Monique’s birthday dinner. It had a burlesque theme, and they women went all out with their costumes, including Ashley, who donned a particularly unfortunate straight, black wig.  But it was all in fun, and all about making each other laugh.

Even Gizelle and Charrisse managed to avoid arguing. Gizelle told Charrisse that she felt her actions had been “messy,” and that it was obvious that she’d only tried to bring Kyndall back into the fold to hurt her, which Gizelle said she found shocking because she had been under the impression that all former beefs between them had been  squashed the year before.

Charrisse said that she had no problem with Gizelle, and agreed that it had been “messy” for Monique and Karen to invite Kyndall to their events, but pointed out that she’d had absolutely nothing to do with it, and that, in fact,  she had told them just how messy they were, and had removed herself from the entire situation. This time, Gizelle was understanding, and the women quickly made up, and began whispering about “French kissing” each other later.

The rest of the night went off without a hitch. Robyn and Ashley acted out the altercation between Robyn and Monique through interpretive dance, complete with an umbrella choking, which Monique found hilarious.  She realized they’d never really talked about it, and she formally apologized to Robyn, and the two women hugged like old friends.

Candiace sang a beautifully heartfelt rendition of Happy Birthday en frencais, and believe it or not, no one laughed, called her a princess, or turned their backs on her to take pictures. The women glowed as they took a final selfie, and declared the trip a success, planning to return to the US with their friendships stronger than ever. I must admit, I’m skeptical.

The ladies will be back in Potomac and up to their usual tricks next week. In fact,  they  may finally get an answer to the burning question of where the Grande Dame is currently living with a pizza delivery farce that will put Lucy and Ethel to shame. Stay tuned!