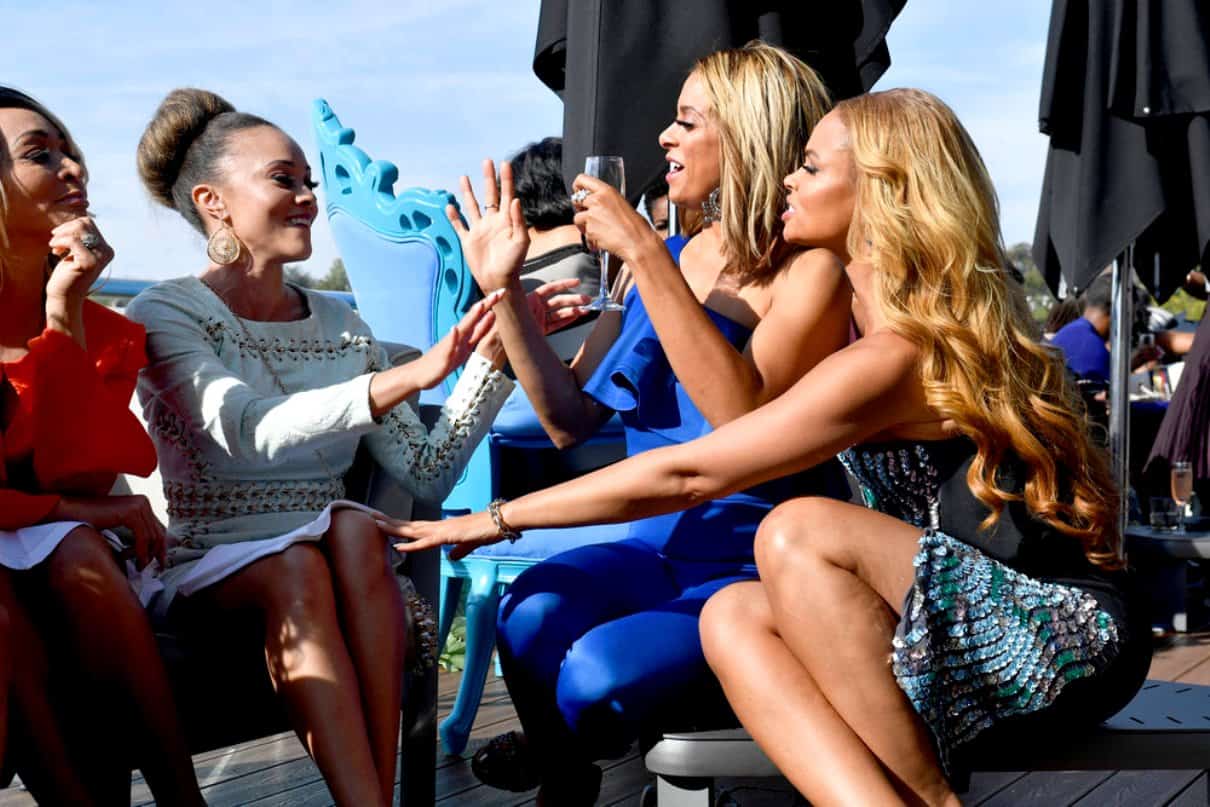 Season three of The Real Housewives of Potomac came to a close last night, and I must say that it’s high time these ladies take their rightful place in The Housewives Hall of Fame. Once the younger, less interesting step sister of the other franchises, these women stepped it up big time, and became the Cinderellas of reality TV.

The great part of this season was that all of the women had plenty of drama happening in their own lives, and with various members of the group, so each story line was equally interesting.  It was truly a team effort.  But if I had to name an MVP, the title would go to Ashley Darby. I know. But hear me out, okay?

It’s not that Ashley is particularly likable, or even all that interesting on her own. In fact, she may be the messiest of all the women.  But she loves to overshare, and not only that, she likes for everyone else to overshare, and when they don’t, she will dig for the dirt (and dig and dig and dig). She’s reminiscent of The Real Housewives of Atlanta’s Bone Collector, Sheree Whitfield, in a way.

If she has tea, she’ll not only serve it up, she’ll spill it piping hot, directly from the pot and into your lap. And she makes no apologies for it.

And this girl is nosy! She wants to know everything about everybody, and this season, she set her sights on none other than The Grande Dame, herself.  She’s been convinced all season that Karen was hiding something, or lying, rather than just accepting the fact that Karen’s life, finances, marriage, and living situation were none of her business.

She even managed to get Gizelle and Robyn in on her quest for the truth, and the three women came up with the half baked scheme of driving to Karen’s house in Great Falls, dressed in costumes, to deliver a pizza, in an effort to determine whether, or not Karen actually lives there.  It was ridiculous! These are grown women.

But did Ashley have a point? Does Karen live there?  She claims to, but she gets awfully cagey when the subject is mentioned, and, according to Ashley, the streets of Potomac have been saying otherwise.

The Pizza Plan was just dumb enough to work…except it didn’t.  Robyn, in a mustache and ball cap, rang on the door bell three times, and although the lights were on, it didn’t appear anyone was home.  But, as Robyn said, herself, lots of people don’t answer the door when they’re not expecting visitors. She also reported seeing a purse that she thought belonged to Karen sitting on the kitchen counter when she looked through the window. Eagle eyed viewers probably also noticed the H embossed on the welcome mat.

Gizelle thought that Karen probably did live in the home, and declared their mission “accomplished.” But Ashley still had doubts, and wondered why Karen wouldn’t have come to the door. She simply refused to give it a rest.

And here’s the interesting thing about Ashley: she spends all this time getting to the bottom of her “friends'” personal lives, but she has major issues going on in her own house.  She wants a baby, and her husband, Michael, is hedging, despite knowing that starting a family is a “non-negotiable” for Ashley.

They’ve spoken about it many times, and he’s come up with every excuse in the book, from wanting to get their restaurant off the ground to doubting  Ashley’s parenting skills because of her own mother’s shortcomings in that department.  This last one left Ashley stung, and desperate to defend her mother’s honor.

But she’s not seeing the writing on the wall.  Michael is much older than Ashley. To put the age gap into perspective, the couple reminisced about their engagement party, which had a “decades” theme that involved everyone dressing as a prominent figure from the decade they were born. Michael dressed as Sinatra, and Ashley went as Vanessa Williams, circa 1984. That pretty much says it all.

And besides, Michael has already been there and done that, and likely doesn’t want to go backwards at this stage in his life.  His children are adults…perhaps even older than their step mother.  Ashley’s mother and uncle believe that Michael is more interested in having a hot, young trophy wife than starting a family. She didn’t really want to believe that could be true, until she spoke with her therapist, who also said it seemed unlikely that Michael would ever want children. Then she asked Ashley a pertinent question:did she really want to have a baby with someone she had to try so hard to convince?

Always one to put it all on the table, Ashley decided it was time to sit Michael down AGAIN to talk babies. Oddly enough, even then, she spent half the time gossiping with him about Karen, and why she and Ray would have moved to Great Falls, and whether, or not they actually lived there.

When the talk finally did turn to their own issue, Ashley once again stated her position, and Michael, once again, stated his, although his excuse did vary slightly.  This time he said that he wanted to make sure their marriage was on solid ground, and pointed out that they had already separated once before.  He explained that during that time, he had started making plans for a future without her, and he needed time to transition into thinking about a future with her.

It was more of the same, and Ashley was clearly frustrated with his noncommittal attitude. During her interview, she confided that while she wasn’t ready to end her marriage yet, she would seriously consider walking away if Michael wasn’t on board the baby train by her 30th birthday!

Now one person who doesn’t need to wonder if her man wants children is Candiace.  Her fiancé, Chris already has three: two younger children from a previous marriage, and a 15 year old son he hasn’t spoken to in a decade.  Candiace was thrilled to hear that the younger children would be attending their upcoming wedding, but Chris wasn’t hopeful about his other son coming.

He told Candiace that he was going to write him a letter, and hope for the best, and she assured him that some day, some way, he would get the chance to know him.  She was actually very sensitive and supportive, a departure from her usual brattiness, that was nice to see. Perhaps she was right when she said that becoming an “instant  step mother” would reveal a “stronger Candiace.” Of course, by definition, ALL step mothers are “instant,” but hey, it’s growth, so why split hairs?

Now every Housewives finale involves a big party, and this time it was an engagement party for Candiace and Chris.  All the women attended, of course, and it was actually really nice..for about 5 minutes. Candiace was showing off her “stronger” side by actually carrying her own purse, and Chris, having learned his lesson from the bubble soccer party, ensured that the women would have something to wipe their hands on, and presented each of them with a cloth napkin embroidered with their name.

The women all agreed it was an adorable and funny gesture. Even Gizelle had to admit that Chris was a great guy, “brown penis, and all.” Don’t ask.

Just as the women were settling in, and beginning to enjoy themselves, Ashley spoke up to tell Karen how nice it was to see her wearing her wedding ring, which had been absent during their trip to France, a fact that only fueled the flames of Ashley’s compulsive curiosity.

Candiace immediately told Ashley that the question sounded like a dig, and that she should stop trying to cause problems, but that’s just not Ashley’s style. She insisted that she’d meant it in the nicest possible way. Of course, Karen wasn’t buying that, and told Ashley that she didn’t care what she thought about her ring, her marriage, or anything else, and that the day she did, would be the day she checked into an “insane asylum,” because Ashley was a “liar!”

In the meantime, Ashley’s curiosity had clearly rubbed off on Michael, because he walked over to Ray Huger, and began questioning him about his and Karen’s living situation, asking if they lived in Great Falls, and whether, or not they owned the home, or were renting.

That’s pretty bold, right?! I mean, who starts questioning someone that way at a party, and it’s not even as though Ray had been sitting alone, and Michael just casually strolled up, and started chatting about real estate. Ray was sitting with Candiace’s mother and another guest, and Michael just came over and started putting all of his business on blast! And when have we ever even seen these men say more than two words to each other?!

Ray quite understandably, and in no uncertain terms, told Michael to mind his own business. And Michael had the nerve to get all indignant, and went running to Karen to tattle on Ray for being “disrespectful.” Her response was simple, yet oh, so very perfect. When he told Karen that Ray had told him that it was none of his business, Karen said “good, Ray told you the truth.”

Of course, Ashley, Gizelle, and Robyn were intrigued anew by this exchange, and they decided to ask Karen about the pizza that had been delivered to her home.  And here’s the thing: Karen clearly had no idea what they were talking about.  When they pressed the issue, and said they had all gotten pizza, and that surely Karen had noticed the pie that had been left at her front door, she realized something was up, and basically said ‘Oh yeah, THAT pizza,’  and said that she’d just seen it that morning.  But they had dropped it there days before, so how could a pizza sit rotting just outside your front door without you noticing for days, unless you really DON’T live there?

Could Ashley have been right all along? Were her suspicions confirmed? I have absolute no idea. After all of that, the  mystery of The Grande Dame and her Great Falls Manor remains unsolved.

But the end of the season means… it’s reunion time! And any true Housewives fan know that reunions are where questions get answered, so I suspect we’ll get to the bottom of this.  We’ve only just begun, viewers.  The real fun starts next Sunday night at 8/7c!

TELL US – THOUGHTS ON THE RHOP FINALE EPISODE? DOES KAREN REALLY LIVE IN THAT HOME? WAS MICHAEL OUT OF LINE FOR QUESTIONING RAY?