Home Real Housewives of Beverly Hills News Did Lisa Vanderpump Just Confirm Her Feud With Her RHOBH Co-Stars? Plus More Details About Her Rift With the Cast

Did Lisa Vanderpump Just Confirm Her Feud With Her RHOBH Co-Stars? Plus More Details About Her Rift With the Cast

The Real Housewives of Beverly Hills star Lisa Rinna posted a not so cryptic video earlier this week in which she accused one of her castmates of refusing to come out of their dressing room to take a photo with the rest of the cast.

It was quite easy to figure out she was talking about Lisa Vanderpump, and a new report is now confirming Lisa was indeed the castmate Rinna was referring to while also shedding more light on Lisa’s feud with her castmates. Additionally, did Lisa herself just confirm the rift with a telling tweet?

While Lisa has remained mum amid all the drama and speculation, a tweet she posted on September 18 appears to be confirmation that she is indeed feuding with her Bravo castmates.

It all started after a fan tweeted the following to Lisa: “If the rumors are true that #RHOBH is another season of mean girls attacking @LisaVanderpump due to their jealousy, I’m done with Bravo. Stupid move killing off the golden goose–she’s why we watch. I’ve already stopped watching most other Bravo shows due to cattiness–over it.”

That fan later suggested that there “will be a lot” of hate coming the way of Lisa’s castmates, mainly Erika Jayne and Rinna, who can’t take down Lisa.

Well, Lisa responded to this fan’s tweets with a heart emoji, seemingly agreeing with their comments. A screenshot of that exchange is below. 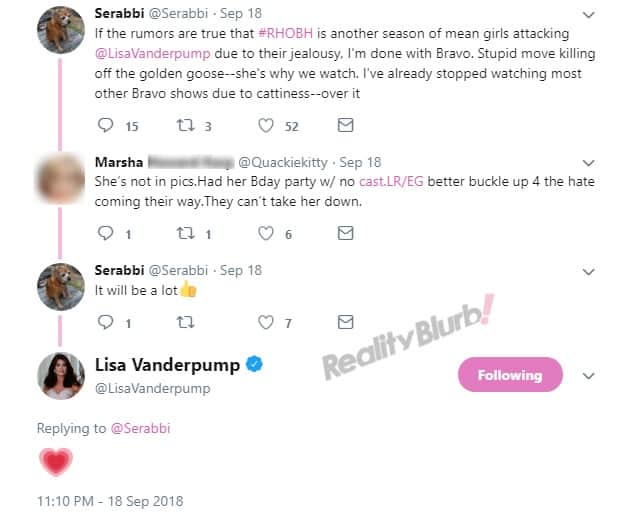 As for Rinna, she deleted the video calling out Lisa shortly after posting it on Monday, but it wasn’t fast enough as the video was already picked up by a few fansites. She had good reason to delete it as she essentially exposed Lisa’s rift with the cast aka a major storyline for the upcoming season that Bravo probably wanted to keep under wraps.

Yesterday, Rinna posted a cryptic message on her Instagram page that points to perhaps regret over her actions. The quote she shared reads, “There are times when my greatest accomplishment is just keeping my mouth shut.”

And while we reported earlier this week that Lisa and her BFF Kyle Richards are clearly on the outs, and appear to have been for months now, a new report by Us Weekly is revealing that Lisa is also not getting along with her bestie Dorit Kemsley, and Teddi Mellencamp.

“There is beef between Dorit and LVP, and LVP and Teddi Mellencamp,” an insider shared, not revealing the cause of Lisa’s feud with Teddi.  “They did a cast shoot for the new promo shots and Lisa wanted to shoot separately and do hair and makeup separately.”

Another source tells the outlet that Lisa’s reported actions were not quite that serious, and that these types of scheduling conflicts occur quite often.

“To keep in line with Bravo’s production needs, at times changes to the schedule can be made to accommodate any talent,” the source explained.

However, the first source insists that the rift between Lisa V. and Dorit is very real after multiple reports came out stating Lisa was upset with Dorit for giving away one of the puppies she got from Lisa’s dog rescue, Vanderpump Dogs, to a shelter.

“There was a situation with Dorit and a puppy, but what hasn’t been talked about is that the puppy was biting Dorit’s kids (Jagger, 4 and Phoenix, 2),” the source revealed.  “So a friend of Dorit’s offered to take the dog off her hands because the puppy wasn’t improving and the puppy was still aggressive and the friend brought the dog to a shelter.”

Although Lisa publicly defended Dorit after those reports came out, Dorit is still feeling upset because her young children “were getting death threats from animal lovers” after getting rid of the puppy. The source added that “the other Housewives are involved in the rift,” as well.

It appears Dorit suspects Lisa was the one who leaked the news to the media or perhaps she feels Lisa didn’t defend her quickly enough. But we must say, judging by the media outlet that broke the puppy feud news, it’s unlikely the source was Lisa.

Here’s to hoping this feud with Lisa is not a deflection from the very real drama some of the RHOBH ladies, mainly Kyle and Dorit, have going on in their personal lives. Kyle’s TV show, American Woman, was recently cancelled and her husband Mauricio Umansky is facing a lawsuit over allegations he acted unethically during the sale of a $32 million Malibu mansion.

As for Dorit, she, alongside and her husband Paul ‘PK’ Kemsley, were recently sued by their business partner over allegations they refused to share profits from their swimwear line with him. It also recently came out that PK was sued by a Las Vegas casino after failing to pay a $2 million gambling debt.

Looks like it’s shaping up to be an interesting new season for the ladies.  You can see how it all shakes out when RHOBH returns later this year.