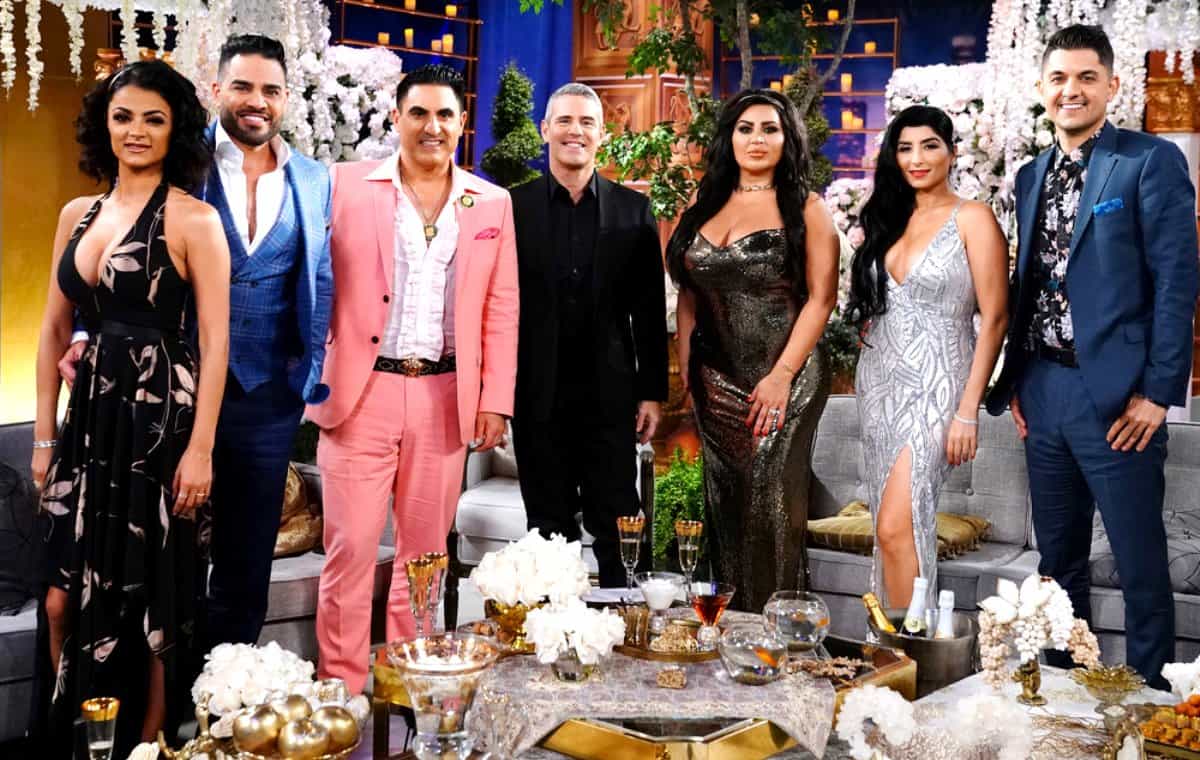 The Posh Persian Posse of Shahs of Sunset was back last night to rehash all the good, the bad, and the ugly from season 7, and as is always the case with this crew, it got pretty out of hand pretty fast, as the cat members took sides, threw insults, and told secrets.

Things took a nasty turn at record speed, as the cast members had barely said hello before Mike and Nema got into it over Mike’s former relationship with Nema’s sister, Mona.  As viewers will recall, it was Mike’s relationship with Mona that brought Nema into the fold to begin with, and Nema was glad to be there.  As he explained many times, Nema was raised by a parent, who did their best to “Americanize” him, and he didn’t have a lot of knowledge about Persian culture, so he was thrilled to be accepted by the group, and to be taught so many things about the rich and beautiful culture he felt he never knew.  However, when it comes to Mona, Nema is understandably protective, and he did not take kindly at all to the way that Mike spoke about her.

Now to be fair, Mike explained that he thought that Mona was a beautiful woman, however, he also said that she was “not his type,” and he told them that was the reason he “friend-zoned” her.  But Nema said that simply wasn’t the case.  He said that, in fact, Mona had friend-zoned him (the viewers agreed by the way) and that she really wasn’t all that into him to begin with.  According to Nema, she didn’t even call it a “date” when they went out, and if she did feel some level of attraction to Mike, she was totally turned off when he pointed out that her nail polish was chipped. Well, I can hardly blame her there, I mean, who the hell does he think he is?! But Mike being Mike, he felt he was justified in calling attention to her imperfection because his “type” likes to stay dolled up for him.

If you’re interested in what “type” Mike likes, Reza was happy to break it down: he said he like girls with long weaves “down to their tramp stamp” who were heavily made up, with large breasts and butts that they were happy to show off.  In a word – MJ! Mike agreed, and said that the woman Reza described was definitely more his speed, but Nema and Destiney said that months later, he was still calling Mona to try to get back together.

Mike said that wasn’t true, but Nema and Destiney continued to call foul, and when he called them liars, Destiney warned him to remember who he was talking to, as he’d never dealt with a woman quite like her.  But MJ broke it down pretty well too.  She said that Mona wanted to be the next Amal Clooney and Mike didn’t fit her bill either.

With that disposed of, the group went on to talk about the two successful relationships of the group: married couples, Adam and Reza and MJ and Tommy, and both couples had a lot to reveal! For starters, Reza and Adam shocked everyone when they shared that they nearly got divorced. A lot of their problems stemmed from the guys being on two separate pages in terms of what they wanted.  Adam wanted a baby, and felt that Reza was deliberately allowing everything from their new home to their new business to take precedence over starting a family.

For his part, Reza felt that Adam wasn’t helping him financially, and wasn’t appreciating all that he was doing for him, and he ultimately threw out the “D word.”  Nema warned Reza about the dangers of doing that, but Mike told him to shut up, and stay out of it, although he basically gave Reza the same advice, and told him that he shouldn’t use that word again unless he was truly ready to pull the trigger.  Reza said he understood that, and that they were doing all they could to work things out these days, including couples counseling. But Adam agreed with Nema.  He said he definitely wouldn’t be “jumping through any more hoops,”  and that if Reza ever talked about divorce again, he’d better have the papers ready!

As for that half a million dollars Reza spent on investing in his haircare line, REZA Be Obsessed, the cast disagreed with Adam and most of the viewers, who thought that Reza should have shared his plans with his husbands.  Reza’s friends felt that there was absolutely no reason why Reza should have discussed his investment with Adam because it was his money and he’d earned it, and that if it were them, they wouldn’t be asking or discussing their plans for their own money, either.

Newlyweds, MJ and Tommy have been to couple’s counseling, as well.  But they were a little more proactive, and went before they tied the knot.  MJ said it helped them to learn to communicate, and to discuss their issues in a far more positive way.  They really do seem very happy, and they’ve got a new little secret that they weren’t quite ready to reveal last night, but something tells me they won’t be able to keep it much longer!

MJ OPENS UP ABOUT BEING PREGNANT AT 45!

Sparks also flew between GG and MJ.  MJ was still angry that GG would have brought up the fact that MJ and Reza slept together back in high school, and GG was still angry that MJ would have invited her ex-husband Shalom’s other ex-wife to her bridal shower.  MJ admitted that she did it to hurt GG, and Reza admitted that he helped her do it, but they both said it was because GG was a bitter and angry person, and that perhaps if she were “sober” and didn’t smoke so much weed, she’d have a better handle on her emotions and her actions.

GG said that she thought they had all gotten over this and moved on, but Reza also said that GG had been telling lies about Shalom, and all of the things she claimed he was doing to her.  But GG said she knew they were all still in touch with Shalom, and revealed that he was now suing her because of things that they had said to him!

When host Andy Cohen said they were going to discuss that matter later, GG said she wasn’t here for it, and told the others to “have a nice reunion,” before storming off the stage, and vowing never to return!  That’s right, a Shahs walk off.  It got pretty ugly, but it’s not over by a long shot, part two promises to pack just as big a punch when it airs in two weeks! Stay tuned!