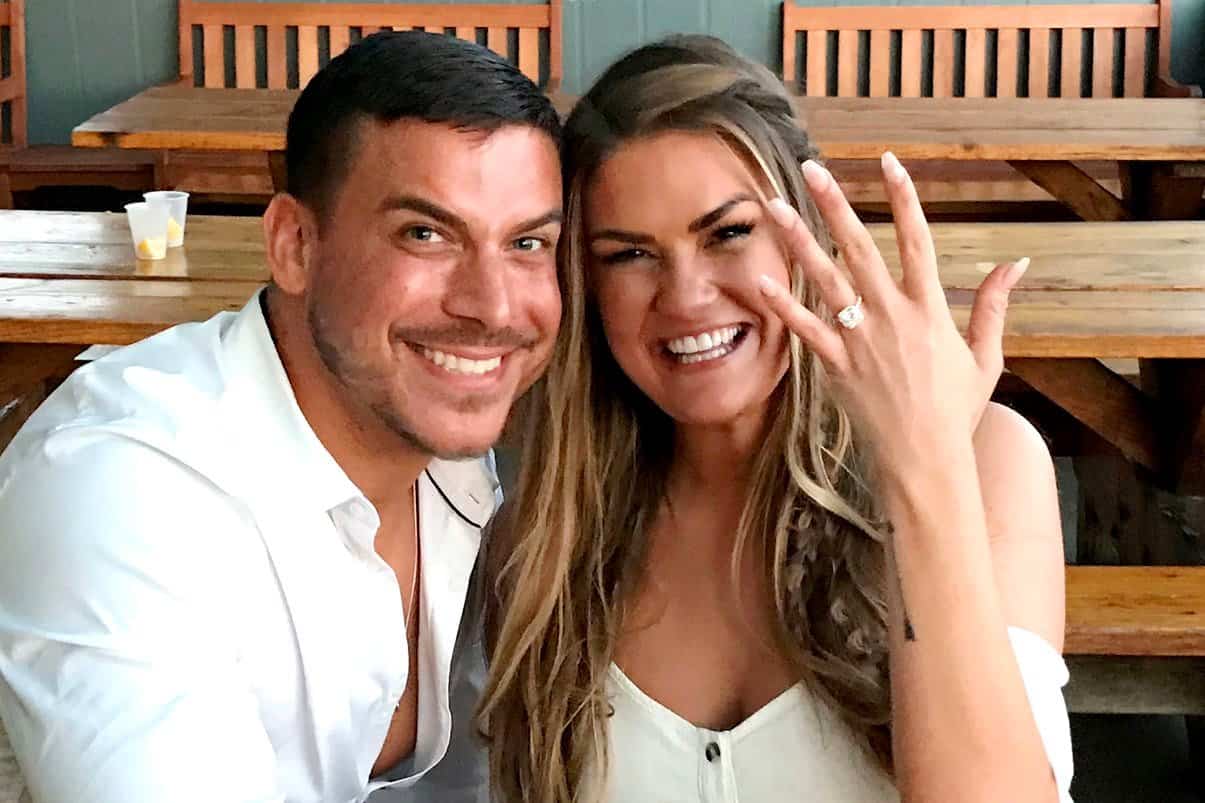 We’ve been keeping up with their Instagram stories. We’ve been following them on Twitter. But now, it’s time to follow them on the newest season of Vanderpump Rules.
A fresh day at SUR and it’s like nothing has ever changed. Scheana and LaLa are talking about weight, Sandoval is b*tching about James, and the restaurant is running as if no one actually works there because let’s be real, none of these people truly work.

Over at Brittany and Jax’s place, we are greeted with a new Jax Taylor, ya’ll. He is SERVING Brittany a turkey sandwich and has decided to stick around instead of taking a job in Florida. It was between “a dream job and a dream girl” and Jax took the dream girl. It sounds so romantic, until you remember all of the sh*t he put Brittany through last year. I am curious as to what the actual f*ck Brittany is doing with her latex gloves on whilst she is eating a sammy/applying makeup, but I guess she can get away with anything in front of Jax these days.

James Kennedy is still a total troll, stirring up drama about Jax and Brittany, but somehow still manages to keep his girlfriend Racquel with him. At the last See You Next Tuesday party hosted by DJ James, Brittany became emotional over his freestyle rap about Jax and Faith …and Jax is fuming. Essentially, in the words of James Kennedy, “Jax wants to f*cking kill me.”

An ever elegant LVP and hubby Ken (with a dog in tow, of course) roll up to SUR to check on the staff who is hard at work…or hardly working. LaLa tearfully recounts her father’s recent death and she commiserates with LVP about sadness. We find out that Lisa’s brother committed suicide and she has been going through a rocky time, but she is returning to business in hopes of making her brother proud and getting back into the groove. This is all occurring while Scheana and her new hair extensions is busy macking it to any customer with a penis because ROB broke up with her and she is incapable of surviving independently.

Jax, ever the gentleman, goes to drop Brittany off at her shift at SUR, but decides NOW is the time to confront James about his newest rap. Jax demands to talk to James “outside in the parking lot,” and James cannot believe that he is on bad terms with Jax, yet again. I mean, James even shares that “Two weeks ago, Jax bought me limited edition underwear.” Um, what? I don’t even want to know… Jax is teetering on old Jax’s ways-his eyes are bugging out of their sockets and he is freaking because James made Brittany cry. I am impressed with his sudden “excellent boyfriend” ways. Who is this guy?!

Later, when Sandoval attempts to have a nice conversation with LVP, James weasels his way in. He shares with Lisa, “I was freestylin’ creatively” and “I might’ve mentioned Jax and Faith in my rap.” Lisa is disgusted, but not surprised, that James made such low blows. In fact, she comes out with her very own freestyle-“You’re a little sh*t, I gave you a pass, but now Jax Taylor’s gonna kick your a*s.” OMG. I didn’t think it was possible, but I think I just fell more in love with LVP.

Meanwhile, Stassi and her new boo, Beau, meet up with Schwartzie. It seems as though Stassi has found a good one this time- Beau allows Stassi to be “herself- and she even cries in her confessional because she just loves Beau so, so much. It’s adorable to see the queen brat herself soften greatly. Schwartzie tells the couple that there is some “top secret stuff” going on tomorrow and on cue, Jax strolls up to join them. He fills them in on how he confronted James, but then blurts out, “I’m gonna jump the topics here. I’m proposing to Brittany on Thursday.” Stassi immediately clings on to her new man and gives him the actual creeps- you know the “propose to me eyes.” Jax is bursting to tell anyone and everyone about this happy news and Stassi makes it clear that if he does one more thing to Brittany, she will “crucify him.” Ouch.

The next day, the “three musketeers” Katie, Kristen, and LaLa (I am pretty sure hell has frozen over) all go to get matching piercings. LaLa lets us know that, “My man and I are doing extremely well.” We learn that her man’s name is Randall! (Pssht- old news). LaLa further shares that her friendship with James is nonexistent and during the piercings, the ladies discuss the whole James/Brittany saga. Katie declares “time’s up on James” and Kristen promises, “I’m the mother*ckin karma police- beware James Kennedy!” I don’t know if I believe these girls, but I am certainly afraid of those (empty) threats.

KEN IS MY SPIRIT ANIMAL. He actually tells the waiter at Villa Blanca that “rose is our water.” ::swoon:: The Toms join LVP and Ken and discuss TomTom- remember that whole terrible idea that LVP had to allow these two clowns to help run this venue? Lisa is frustrated with the boys because there are no “ideas on paper” and they are essentially hot messes. She tries her best to guide the guys to focus, but the reality is, she had to move ahead with the cocktail list because they’ve been dragging their feet. That totally rubs Sandoval the wrong way (what else is new?!) and he’s bummed the drinks are out of his hands.

Stassi and Brittany meet up at the dog park. Stassi is DYING because she is doing everything in her power not to blow the whole proposal secret. As Brittany rambles on and on about her relationship with Jax and how much better it is, Stassi stares stupidly and can barely hold it together. In the meantime, Jax, Schwartzie, and Sandoval go to see Brittany’s ring. Jax has the plan set and the ring ready. He shares that he has decided to use the money his father left him when he passed away for Brittany’s engagement ring. He warns the boys that the ring is gonna be massive and that’s because Jax feels as if Brittany is his soul mate/she deserves it. On a side note: Brittany actually shares that when her and Jax were broken up briefly, she actually slept with her ex-boyfriend. BUT DON’T WORRY-Jax knows. What the hell!!

It’s the big day! Jax shoves Brittany’s engagement ring box down his pants because it’s too noticeable everywhere else and he is as nervous as can be. The gang hangs back and gathers at Katie and Schwartzie’s apartment. Katie and Kristen try to figure out if Jax is proposing to Brittany and Stassi internally loses it while trying to keep the secret under wraps. It doesn’t take long for Stassi to spill the beans to the girls- Jax is actually proposing!

Jax and Brittany make it to Malibu and order up at Neptune’s Nest, a cute little seafood joint that is relatively casual and certainly doesn’t call for a white sundress…I have a feeling Brittany knows something is up, too! Jax is sweating and making an absolute fool of himself. He gets himself together, snags a tray from the restaurant, and decides now is the time to reach down his pants and grab the ring box that is wedged between his balls. Romantic Jax delivers Brittany her order, an oversized diamond engagement ring, and drops down on one knee. Obviously, Brittany says yes and the couple proceeds to do all the things that newly engaged couples do: cry, make out, and cry. Jax claims, “It’s big right? I did good!” and Brittany is in awe. And this is how you kick off a new season!

TELL US – THOUGHTS ON THE VANDERPUMP RULES SEASON PREMIERE?