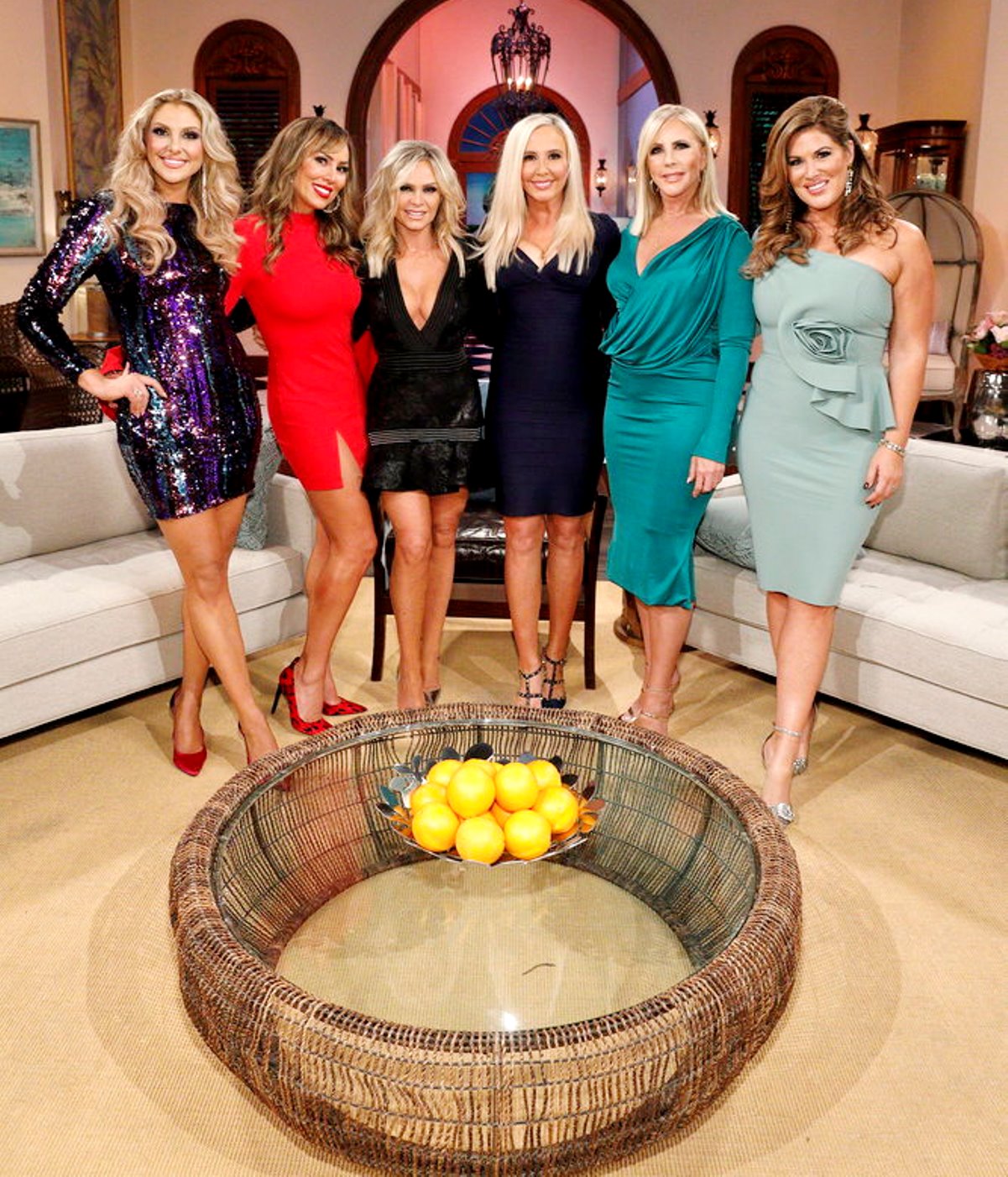 I can hardly believe that this riveting three-part reunion is coming to a close, but alas, it’s the final time we will see all of The Real Housewives of Orange County together this season.

Andy Cohen kicks off the reunion with Kelly’s love of a “PHD.” We get a glimpse at Kelly’s time this season and follow her homelife/lovelife as it went up and down. Kelly shares that her relationship with Michael is like a rollercoaster, but for the most part, things are going well. Kelly claims that she is “the most generous person on Earth” and wants to find a chivalrous guy, especially because Michael has moved on and has found himself a younger woman. Of COURSE Vicki knows the girlfriend and is concerned by their “big, big age difference” and you can tell that she enjoys busting Kelly’s chops. The question about Kelly’s relationship with Jolie being more of a BFF set-up surfaces, but Kelly makes it clear that she understands that Jolie is her daughter, but also her friend.

The topic changes to Eddie’s “heart party.” We are forced to see Eddie don his red heart suit again and watch the Kelly/Shane/Steve debacle unravel. Nothing makes me laugh more than hearing Kelly call Shane a “dork,” because he is. Andy wants to know why Kelly can’t control her temper and the minute Gina steps in to share her opinion, Kelly demands to know if Gina is the “morality police.” LOL. The women bicker back and forth about whether or not Kelly’s reaction to Shane’s comments was “disproportionate.” Kelly hollers that Emily should, “Get your b*tch (ie: Shane) under control, how bout that?”

Speaking of disproportionate, Andy so eloquently reminds Emily that in HER rage, she told Kelly she was going to “f*cking” KILL HER during this episode. Emily fesses up to that fact, I mean, it IS on video, but does not appreciate Shannon jumping in. Emily freaks out, puts her finger in Shannon’s face, and repeats over and over again, “I’m not talking to you. I am not talking to you.” I’m not sure about you, but if Emily told me, in anger, that she was gonna kill me, I would be afraid. Very, very afraid. Emily claims that this is all “ridiculous” and “regrets going to that place.” She said so on her blog! Andy wants to know why Kelly continues to call Shane a “dork,” and Kelly says it’s because Emily continues to make excuses for her “snarcastic” husband. Emily tearfully asks for Kelly to have “enough respect for her husband” and the issue seemingly gets resolved, at least in Andy’s mind.

The Jamaica trip is the next segment to be covered during this reunion. We watch as the ladies laugh, fall, scream, anddddd twerk. I wish my eyes could unsee Vicki doing those dance moves, but it’s too late. The whole Vicki butt lift/implant topic is entertaining only because all of the ladies ganged up on Vicki. I appreciate Vicki’s apology about the twerking, as I found it personally offensive.

“According to Eddie, Tamra enables Shannon… Long simmering resentment led to an epic confrontation that shook the ladies to the core.” That’s a direct quote from Andy, as I am not sure anyone could put this whole issue as gracefully. The Shannon vs. Tamra fights this season have reached new levels, especially when they were in Jamaica. Shannon shares that she has had dark days and Tamra was there for her throughout. Tamra “wants to be clear” that she was going through a bad time herself and didn’t even really “know” how “emotionally drained” she was in their friendship. The question of “co-dependence” gets brought up and Shannon does her best to clarify that she just likes to be with people she knows.

Shannon continues to explain that she is not always mopey- she even danced with an injured ankle in Jamaica!- and Gina blurts out that “this is exhausting.” Tamra jumps on this bus and demonstrates that Shannon is always like “me, me, me.” Shannon becomes emotional when she explains that she only leaned on Tamra so much because she thought they were true friends. I can totally see Shannon’s side and I have to admit that Tamra looks a bit like an a*shole. It’s a typical “I need attention, too” friendship. On a different note, watching Gina’s eyeballs pop out of her head makes me wanna scream. I am not into how much Emily and Gina try to psychoanalyze this friendship – like, you’ve been on the show for two minutes. RELAX.

Regarding the whole Shannon needing meds fight, the tension gets even thicker between Shannon and Gina. Shannon is over Gina putting herself in the middle of everything and Gina states that “she’s sick of it” with Shannon and doesn’t think it’s right that Shannon was rude to her. I wanna high five Shannon when she retorted, “the truth is Gina, I don’t really like you.” Shannon admits it’s a combination of Gina being “a new girl” and that she just really does not like Gina.

Shannon further explains that she “understands that” medication has “done wonders for some of my friends and a few that have turned zombie-like.” The fact that the women called Shannon a mess who needed help hit a nerve for Shannon, as that is what her ex-husband used to tell her all the time. The next issue to tackle is Shannon’s self-medication: aka- vodka. The women all think that Shannon does not have a drinking problem, but they have trouble clarifying their comments about Shannon’s “rich girl problems.”

Andy asks if there was anything else that was never addressed that was said in Jamaica. Tamra wants to know if Shannon is ever going to talk to her again, and Shannon shares that she was “afraid” to talk to Tamra before this reunion, but understands that she needs to work “on listening and not icing out.” Tamra knows that Shannon has this weird defense thing, but that she is a great person. Shannon states that she “instinctively made a correlation in her head” between what Tamra was saying to what David, her ex, was saying. Shannon thanks all of the women for “dealing with her” and it appears as though Shannon and Tamra are a step closer to being friends again.

Andy needs to know what was going through Gina’s head the day of Shannon’s eye surgery. Gina makes it clear that she felt like she NEEDED to make sure Shannon was ok. Shannon did not appreciate Gina stirring sh*t up. Gina shared that Tamra said that Shannon was not mentally ok. I’m not even clear why this argument is still going on, as I cannot take Gina seriously because all she does is put words in Shannon’s mouth. In her frustration, Gina yells to Shannon, “you are an open book of bullsh*t!!” Obviously, Emily nods in agreement with her bestie and the rest of the women’s jaws drop. Tamra, friend of the year, calls Gina out for a “jack a*s move” and Gina apologizes and “feels bad” for Shannon. Gina tries to explain that she does not have malice in her heart and she understands what Shannon is going through. Gina admits that her version of “checking in” was simply “bad timing.”

Andy wants to be sure that Shannon accepts everyone’s apology and she says she does, but she’s not necessarily “a fan of theirs.” I am not a fan of Emily or Gina, either. I am happy to see this season end and am hopeful for two new cast members come next season. Andy is like an old aunt at a holiday dinner and asks all of the women to share one thing they would like to take back this season.

Kelly: “The worst moment is when I said David was a saint because there’s no effing way possible.”
Gina: “I would take back inserting myself.” (And all of your bad outfits???)
Emily: “I would take back threatening to kill Kelly. It was not a proud moment.”
Vicki: “The time when Michael was relying on Steve and I for strength…I would take back Michael putting me in a bad position.” (Somehow twerking didn’t make the cut????)
Tamra: “Venting my frustrations with Shannon.”
Shannon: “Jamaica. The way that I acted. Losing my sh*t in Jamaica.”

To that, Andy whips out shots of tequila for everyone, because #mexico, and all seems to be forgotten as the women toss back the booze and tempt to “twerk it out.” Until next season, OC!

TELL US – THOUGHTS ON THE RHOC PART III REUNION? DO YOU THINK THE TRUCE WITH TAMRA & SHANNON WILL LAST? DID YOU ENJOY THIS SEASON? DO YOU WANT GINA AND EMILY TO RETURN?