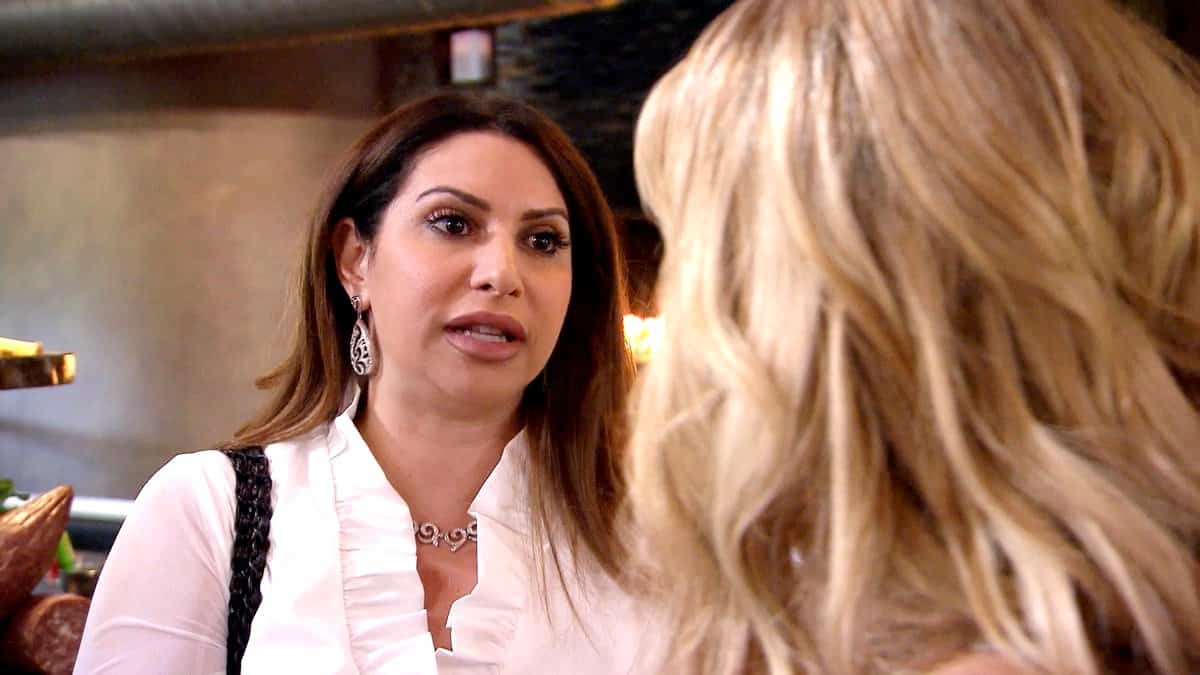 Well, it’s a new year, and if you can believe it, last night little Real Housewives of New Jersey baby boy, Joey Gorga is already making his Communion. Doesn’t it feel like just yesterday he was being christened, as his family members chased each other through a reception hall and threatened to kill each other? They grow up so fast!

When we picked up with the Garden State girls last night, his mom Melissa was just hoping to get through the day without a repeat of the drama that had gone down during his first religious rite of passage and it didn’t look all that promising. For starters, Teresa was still upset with Jackie for her comments about Joe Guidice from a few episodes back.

Granted, all Jackie did was speak the truth, but Teresa isn’t a huge fan of the truth–especially when it comes down to the specifics of where Joe is while he’s “away.” Seriously, it’s as though Jackie had never watched the show before making her appearance this season! I think we’re all well aware of Teresa’s position on the subject.

But here’s the thing, Jackie genuinely didn’t think she’d done anything wrong, and although Dolores had tried to explain it to her when Jackie went to her asking for pointers on how to “handle” Teresa, she still didn’t get it.  Last night, Melissa took a stab at it when the two went to lunch.  She explained to the newbie that her sister-in-law was likely hurt by her comment but that she could see both sides of the issue. Mostly, though, she was just hoping that whatever her feelings were, Teresa would hold her tongue on the big day. Jackie was hoping the same thing, and she wondered aloud if Teresa would attempt to “come for” her during the festivities. Jackie is tired of being scolded and yelled at and vowed that Teresa was going to learn to show her more respect going forward. Lol! That’s adorable.  She definitely never watched the show before.

Elsewhere, Teresa had bigger fish to fry. Her daughter, Melania is interested in becoming a rapper, and to that end, Teresa set up time for her to have a lesson about hip hop swag from Fetty Wap’s producers. She’s hoping that it will be a productive outlet for Melania, who of all the girls is probably the closest to her father, and is having the most difficulty dealing with his absence.  Teresa explained that since Joe’s been “away,” Melania becomes easily frustrated and often lashes out. She’s also lacking some confidence, which is not uncommon in pre-teen girls, and her rap game started out a little slow, but with some encouragement, she was soon having a blast and rapping with the best of them.

In the meantime, Joe Gorga and Dolores’ husband, Frank Catania met for lunch and discussed some of the latest issues with the ladies. Joe filled Frank in on all the drama that went down in Bimini, and explained how unbelievably “gaga” Marty is over Danielle’s skills in the boudoir. When talk turned to matters closer to home, Frank discussed the fact that Dolores was still angry with him over the fact that she’d been one of the last to know that he got disbarred. Joe understood all too well, as he’d entered into his now defunct restaurant venture without initially telling Melissa.

Frank also advised Joe to take Teresa’s advice, and spend more time with their father. After all, Frank warned, none of us are getting any younger, and besides, no one lies on the death bed wishing they’d spent more time working. It was a surprisingly deep conversation for these two men, especially considering they were in a sports bar in the middle of the afternoon, and it was actually sort of touching.

On the other side of town, Jennifer was preparing for her brother’s upcoming wedding, and she and her mother were shopping for the traditional Turkish gifts for the bride-to-be, as she complained about how little time her husband was spending at home lately. She was particularly irked because when he was around he seemed to always be criticizing her mothering, and telling her that she was far too lenient and spoiled them too much. She seemed hurt and surprised when her mother agreed. And as it turns out, she’s not the only one.

While enjoying her morning coffee, Dolores was stunned when Frank came in the kitchen to show her an article Jackie had written in The Bergen Record about spoiled children.  It was a thinly veiled and scathing attack on Jennifer, and Dolores knew it, and she was all too happy to call Jennifer to make sure she knew all about it. Jennifer was understandably enraged. Things weren’t looking good for Joey’s communion.

When the big day arrived, Melissa put her own beef with Dolores aside, and hoped for a smooth day, as they air kissed and swapped compliments, despite the ugliness of the recent encounters. Teresa and Jennifer weren’t quite as subtle. They both stared daggers at Jackie as she entered the reception moments after Jennifer had filled Teresa in on the article she’d written.

Jackie purposely avoided making eye contact with Teresa and Jennifer altogether, and made a beeline for Melissa, the only friendly face in the room at that point, but she soon found herself face to face with Jennifer, who was dying to confront her. But she was completely oblivious to Jennifer’s anger, and instead, started talking about Teresa, but Jennifer couldn’t have cared less about that.  She said she knew exactly how Teresa felt, and that she agreed with her about families being off limits, and then she lit in to Jackie about the things she’d said in the article.

But once again, Jackie wasn’t the least bit remorseful. In fact, she said she’d done nothing wrong. She explained that nothing she’d said in the article had been untrue, and then further defended her actions by saying that she’d never mentioned Jennifer by name, and that, in fact, much of what she’d said about her over the top home and extravagant lifestyle had actually been quite “complimentary.” Girl, please! You made a bold move, and I respect it, and it makes for good tv, but come on, when you get called out on it, you’ve got to own it. Jennifer was flabbergasted, but luckily was classy enough to hold her tongue during the party, and simply walked away.

Margaret arrived shortly after, and she actually encouraged Jackie’s behavior–even when it came to Teresa. She said that she felt Teresa had treated her unfairly, and once again, Jackie defended herself, saying that she hadn’t attacked Joe’s character or Teresa’s with her prison comment, and hoped they could all eventually be friends. As they moved on to discuss the article, Melissa walked over to join them, and she and Margaret both said that they found the whole thing hilarious, and comforted Jackie by saying she’d actually been pretty complimentary to Jennifer and her family.

Jackie must have been emboldened by their support because she sauntered right on over to Teresa, and asked her if they could talk in private (again with the bold moves). Once they were out of earshot of the others, Jackie said that she hoped she and Teresa could get together sometime soon and talk things over. Teresa agreed, but during her confessional, she said that Jackie was “delusional” if she thought for one minute that they were going to sit down and have a nice little chat. I couldn’t agree more! I just hope the table in the restaurant is bolted to the floor and the flat wear is plastic! Stay tuned!