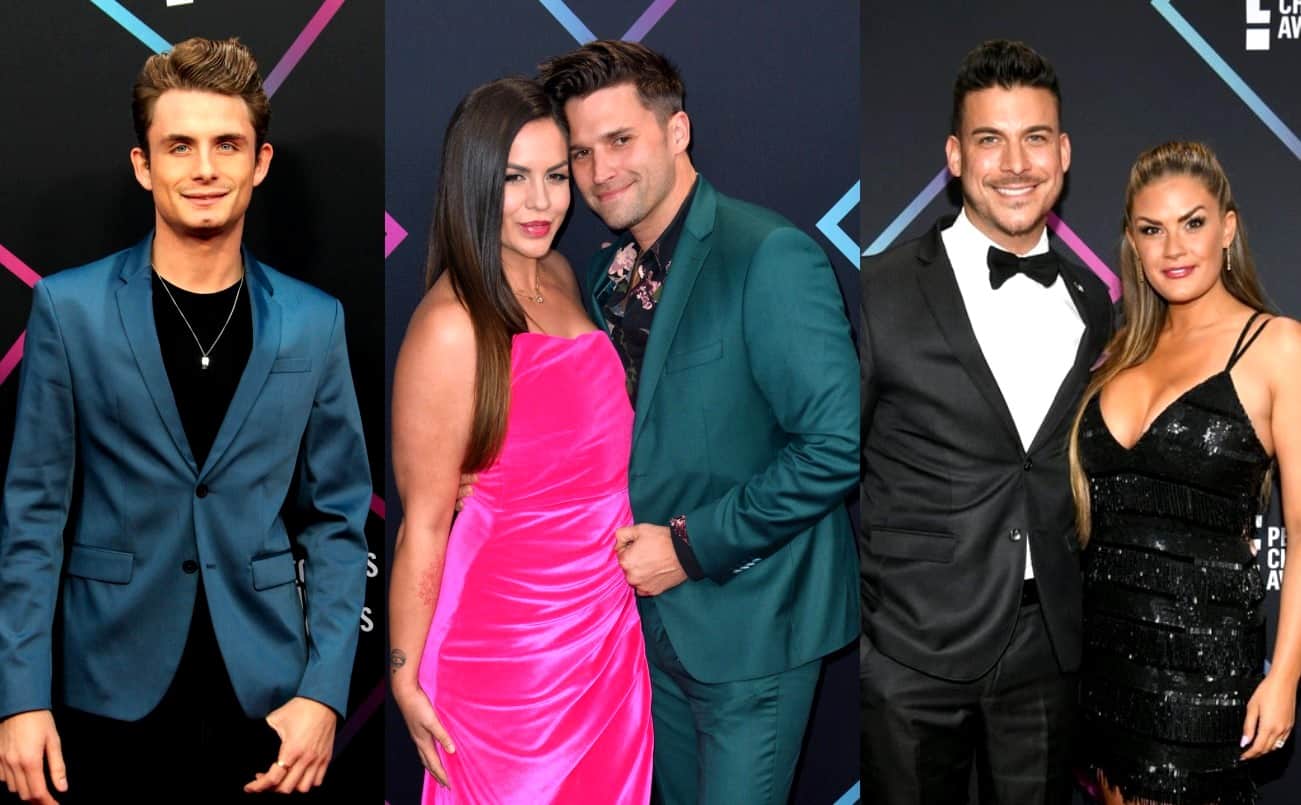 James Kennedy lashed out at a number of his Vanderpump Rules co-stars on Twitter last night, starting with Katie Maloney.

Seemingly in response to a story Reality Blurb shared earlier this week regarding a number of tweets posted by Katie about James’ recent behavior on the show, he took aim at her alleged lies and suggested her marriage to Tom Schwartz would soon end in divorce.

“Katie Maloney is one disgusting human. Basically making up stories about me to gain gain gain. That’s all she does – her marriage won’t last and trust me neither will she after #PumpRules,” James tweeted (and quickly deleted) on January 2. 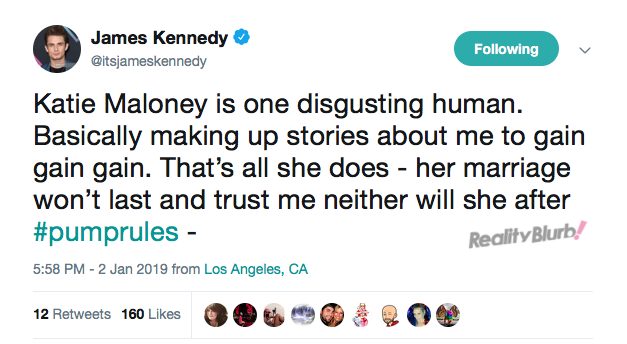 Last week, after demanding James be fired from his job at SUR Restaurant during a conversation with boss Lisa Vanderpump, Katie took to Twitter, where she mentioned “abuse” after being body-shamed by James.

“I know the truth, say what you want… #abuse #consent,” she tweeted.

Then, after a Twitter user slammed Katie for using the term “abuse” by labeling her “disrespectful” and “ignorant,” Katie seemed to suggest she was standing up for someone who had also been abused.

Although Katie has not yet responded to James’ tweet, which seemed to come in reference to her posts above, he recently caught the attention of Brittany Cartwright who fired at him earlier this week after he dissed her fiancé, Jax Taylor, and her co-star, Lala Kent, by mentioning the passings of their fathers.

“And Jax?! He is just a sad man after his daddy died,” James had written. “Coming for me cause I’m the only man he don’t like — brother make peace with your dead father please so you can be set free [that] goes for Lala also. Btw hemmed fun of George [Michael] when he left.”

In response, Brittany said, “The disgust continues. [James Kennedy] I pray YOU will find peace some day.”

She also included a screenshot of what he said, which can be seen below.

The disgust continues. @itsjameskennedy I pray YOU will find peace some day. pic.twitter.com/OywfbyoRgC

After seeing what Brittany wrote, James shared and deleted a post on Twitter, which read, “Jax is the disgust. That lives in most people screens and babe you’re engaged to it. ? #goodluck #greatfirstwife.” 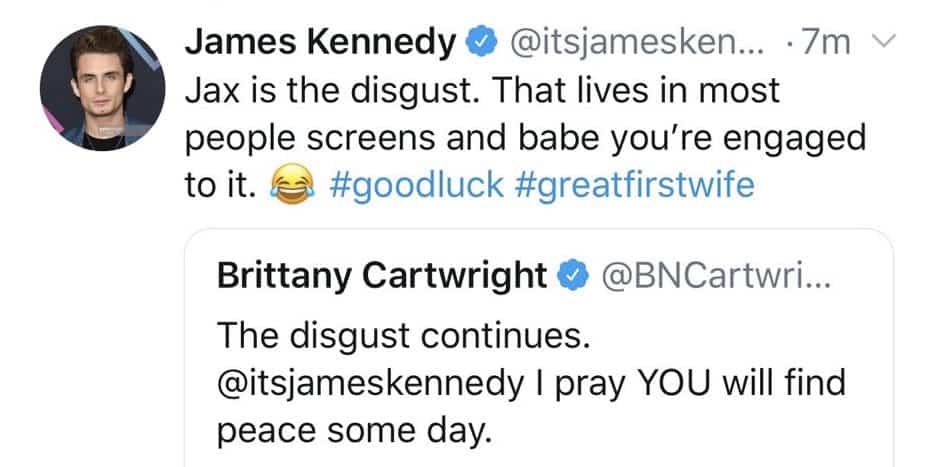 Shortly after berating his co-stars, James erased his mean tweets and shared a new message with his fans and followers, in which he apologized for his behavior before suggesting he acted out after being provoked.

“Hey I’m sorry for what I said about Jax and Lala and I apologize deeply to them and anyone I offended,” he wrote. “I hope you guys also stop provoking me, thank you and I wish everyone a happy new year.”

Hey I’m sorry for what I said about Jax and Lala and I apologize deeply to them and anyone I offended. I hope you guys also stop provoking me, thank you and I wish everyone a happy new year.

Unfortunately, not everyone was sold on James’ apology.

“Keep your fake a** apology homie, I know Bravo made you do this we aren’t idiots, know your role in life and keep your mouth shut,” Jax replied. “You will always be on the bottom of the totem pole in life until you figure your shit out. You’re a sad miserable human being I feel bad for you.” 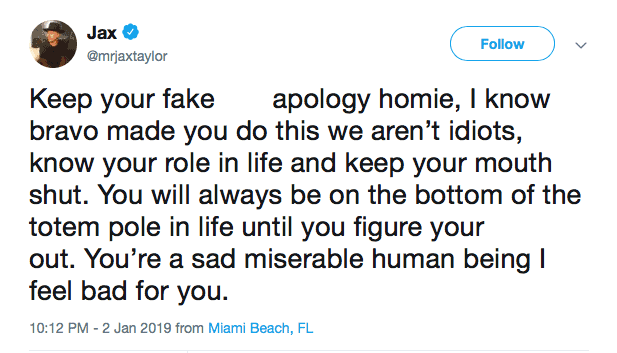 Jax then slammed James for “insulting women” and called him a “joke” before taking aim at his inappropriate comments about his father’s death.

“Talking about my father who passed away is not entertainment, run and hide my friend, run and hide,” he advised.

“There is a difference between someone who notices his wrongs and changes everything about his life for the better and someone who just doesn’t care who he hurts no matter what and has no intention of admitting his wrongs or changing,” she tweeted. “We know what’s real. Y’all see 30 mins.”

There is a difference between someone who notices his wrongs and changes everything about his life for the better and someone who just doesn’t care who he hurts no matter what and has no intention of admitting his wrongs or changing. We know what’s real. Y’all see 30 mins

TELL US: WHAT IS TO BLAME FOR THIS NASTY FEUD? DID JAMES GO TOO FAR?