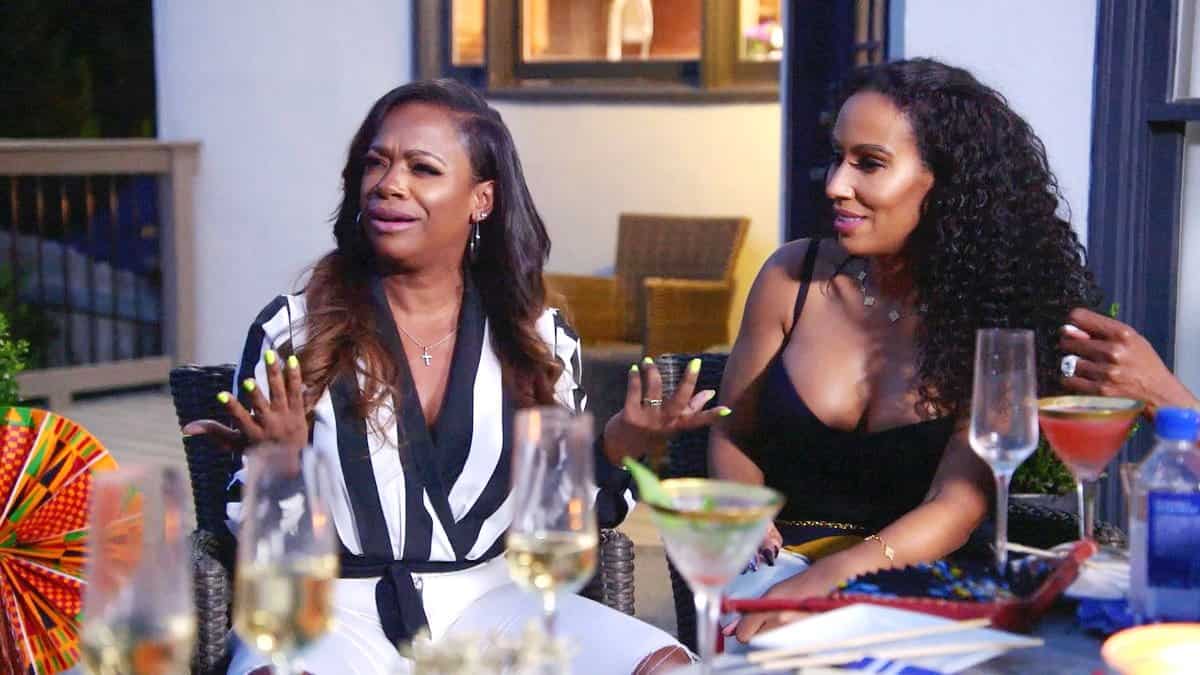 So, word on the street is that the ratings for The Real Housewives of Atlanta have taken a nose dive, and I have to say I can see why.

This season’s many dramas just seem manufactured, not to mention completely unnecessary. I mean, I love a good catfight as much as the next reality show viewer, but these ladies seem to be just arguing for the sake of arguing these days. Besides that, none of them seem to like each other, or even to have a whole lot in common other than being castmates on the show, so it’s hard to see why they even hang out with each other, other than to film a bunch of unnecessary arguments about nonsense. Last night’s episode did little to change my opinion.

When we picked up with the ladies, we saw Porsha and Kandi in the throes of yet another vicious verbal smackdown. They were really going at it, but we viewers weren’t completely sure why–until the show did a rewind to one week before. Apparently, Kandi threw a birthday party for her husband, Todd, and things got a bit out of hand between Porsha and a member of Kandi’s staff, who promptly asked her to leave. Now, for some reason Bravo didn’t see fit to film this party, so we’re left hearing Kandi and Porsha’s two very different versions of events.

Yes, the show failed to film what was probably the most dramatic event of this lackluster season.

According to Porsha, one of Kandi’s many assistants, Jamie, who just happens to be the same girl Porsha chased out of another party a few seasons back, began following her around the venue with Sherri, an ex-girlfriend of Porsha’s boyfriend and future baby daddy Dennis, in tow. She claims that Sherri attempted to kiss Dennis, who “hit her with the Matrix” to avoid her advances. Porsha was understandably angry and attempted to confront the woman over her boldness, and was booted from the party, only to wake up the following day to a barrage of phone calls from the press and “false” stories in the blogs about how she got into a drunken brawl and had to be “dragged” out of the party.

Now granted, Kandi claims that she didn’t see any of it, but according to her “people,” it didn’t go down exactly as Porsha said. They said that Sherri simply greeted Dennis with an innocent hug and a chaste kiss on the cheek–not completely inappropriate considering her name is tattooed somewhere on his body–and Porsha lost it and began going off on her out of nowhere. To make matters worse, Kandi’s camp also claims that Dennis later texted Sherri “lol-ing” at the whole incident. This certainly wasn’t the smartest move, and they feel that Dennis may have enjoyed having two women fighting over him a little too much.

Porsha was really angry — mainly because she never heard from Kandi after the party.  Porsha felt it would have been appropriate for Kandi to check in on her, or even to apologize for the fact that Porsha was thrown out of the party, but Kandi felt like if anyone was owed an apology it was her, and she was equally angry that she hadn’t gotten a mea culpa from Porsha for acting up and potentially ruining a perfectly nice party.

Which one of them is right? Who knows? But here’s the bigger question: why did Kandi invite Porsha to Todd’s party in the first place? And even more curious, why did Porsha go? It’s especially odd considering it wasn’t being filmed for the show. The two women can’t stand each other, and have barely been civil to one another since Porsha wrongly accused Kandi of plotting to drug and rape her a couple of seasons ago (another baseless and unnecessary argument, but I digress).

In the meantime, Cynthia was missing her daughter, Noel, who’s off at college, but was happy to have the house to herself, as her new boo, Mike Hill was coming to visit for the first time in two months. It would be the first time he’d be spending the night at Chez Bailey, and he’d told Cynthia ahead of his arrival that he had a very important question to ask her. He’d sounded serious on the phone, and Cynthia began to wonder if he might be planning to ask her to marry him, and she was prepared to say yes. Instead, he asked her to ‘be his lady,’ which was completely anticlimactic, not to mention sophomoric. I mean what’s next, asking her to wear his class ring?! Either way, Cynthia was happy and giddy and the whole thing was unbelievable corny.

NeNe filled Cynthia’s ex-husband, Peter, in on Cynthia’s new love interest when he stopped by to visit her and Gregg, and he wasn’t even jealous, although he did throw a little shade Mike’s way. When NeNe mentioned that Peter had likely seen Mike on TV since he’s such an avid sports fan, Peter said that he watched ESPN and not Fox Sports, the network on which Mike appears.

Across town, Eva and her fiancé, Mike, had dinner with newbie Tanya and her fiancé, Paul, at their place. Eva mentioned that she was still feeling a little guilty over the fact that NeNe’s feelings had been hurt about being excluded from Eva’s Miami bachelorette bash. The two women decided that the best way to rectify the situation was with another trip for all the ladies to celebrate Eva’s upcoming nuptials. They spun the globe and decided they’d go to Tokyo. Another trip?! And overseas at that–as though Americans don’t have a bad enough to be embarrassed about these days! It was also decided that they’d invite the ladies over to Tanya’s house for a little party in her “hibachi room” (I just can’t) to announce the destination.

Now, a get together when the ladies are fighting is never a good idea, am I right? And Porsha was still sore over being booted from Todd’s birthday party and the fact that she still hadn’t heard from Kandi. She had a get together of her own so that she could whine to Cynthia, NeNe, and Shamea and tell them her side of the story. At this point, she was beginning to think that Kandi had set up the whole thing to humiliate her, as Cynthia and NeNe looked on. They said that surely Kandi’s employee wouldn’t have overstepped her bounds so boldly as to throw one of Kandi’s guests out of her party without Kandi’s permission. They may be right. Then again, Porsha is likely a little overly emotional these days, considering she’s throwing shade for two. She also decided to finally announce that she’s expecting, and the women squealed in delight at the news.

On the day of the hibachi party (I still can’t), the ladies were completely wrapped up in the Kandi/Porsha’s drama and could speak of nothing else.  When Kandi arrived, she began filling them in on her side of the story. You see, it’s interesting, but none of them actually saw what happened. I’m starting to wonder if anything happened at all. I may need receipts. Everyone agreed the two women needed to clear the air, but that may not have been the best idea.

Porsha wasn’t actually planning on broaching the subject at all that night, but the other ladies had gassed Kandi up prior to her arrival, and Kandi pounced immediately. When Porsha brought up all the “lies” in the blogs, Kandi asked if she was implying that she had been feeding those lies to the blogs. Porsha said that she wasn’t implying any such thing, and had only wanted Kandi to reach out and apologize or at least check on her.

Kandi said that Porsha should have reached out to her to apologize for being the aggressor. But Porsha once again said that she hadn’t been the aggressor, and felt that she had been “wrongly” kicked out.  She added that Kandi wasn’t her friend (is this news?!).  Kandi accused her of “playing victim,”  and Porsha accused her of being “fake” and called her a b***h.  Before long, Kandi was on her feet, screaming back at Porsha about her inability to control herself.

It was a long show, Y’all. And this drama isn’t over, the melee continues next week.  Stay tuned!

TELL US – THOUGHTS ON THE LATEST RHOA EPISODE? DO YOU BELIEVE PORSHA’S VERSION? OR KANDI’S VERSION?