The Real Housewives of Atlanta Recap: Porsha Confronts Dennis Over Texting His Exes 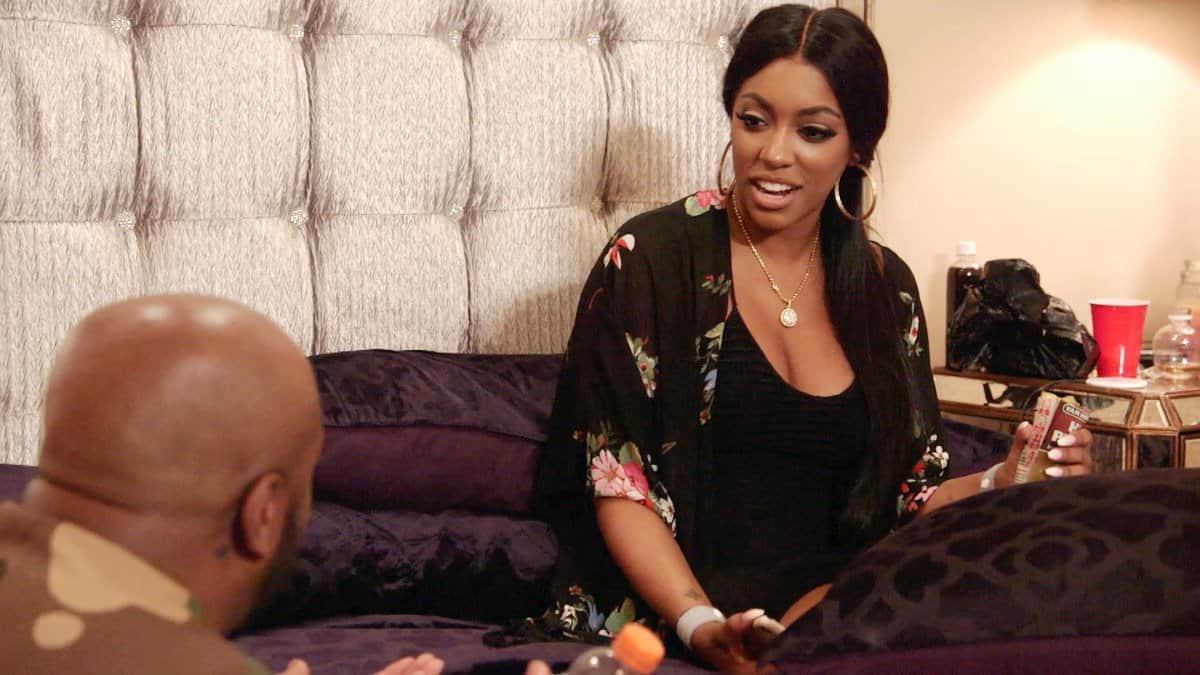 Our favorite peaches were at it again last night, and things got pretty sour. The Real Housewives of Atlanta love to throw shade, and last night’s episode was no exception. We picked up where we left off last week with Porsha and Kandi still steaming mad at each other over their conflicting stories about what went down at Todd’s birthday party. The sad thing was that it was supposed to be a good night for the ladies, but those two took things from 0 to 100 in a matter of seconds!

Porsha was still going on and on about the fact that Kandi hadn’t called to check on her after she was thrown out of the soiree and Kandi said she really didn’t care anymore. As they all began to move their ladies night indoors to Tanya’s hibachi room (could this chick be any more extra?!) so that Eva could announce that they would all be taking a trip to Tokyo for her bachelorette bash, she was beginning to  wonder if they had any business getting on a plane together, and I must say, that on this, we agree.

Especially since there were still some hard feelings. When Porsha went back outside for some air (hibachi rooms get hot, Y’all), NeNe followed her and asked if she planned to share her big baby news with the other ladies, but she said that she had no intentions of making the happy announcement while Kandi was there. Eventually being so close to the hibachi got everyone a little steamy, and Tanya suggested they all go back outside. Shamari wisely stayed back with the chef and enjoyed her meal in peace before she joined the others, and she was right to do so because, before long the ladies were right back at it again.

Porsha wanted to know how Eva and Tanya had gotten so close that they were now hosting girls’ night together, and Eva said she admired the expert level shade Tanya had thrown during their trip to Destin a few weeks ago. It had been fairly subtle, but it was hard to miss. Once again, Porsha piped up and said that it was funny that Eva caught everyone else’s shade, yet seemed to conveniently gloss over her own. Eva replied that she ‘didn’t have a shady bone in her body,’ but Porsha wasn’t letting her off the hook so easily. She reminded her that she’d thrown some shade Cynthia’s way when she referred to her as a “mother” in the modeling world, in reference to her age. Of course, this was pretty shady on Porsha’s part because Eva had made the comment to Porsha privately while the two of them had been at the gym, and had never meant for Cynthia to hear it.

Porsha said that Eva should “own up” to the things she said, which Kandi found hilarious, but since Cynthia seemed completely unbothered by it, (she did win the walk-off in Destin, after all) Eva didn’t bother with an apology, and instead, announced the plans for the trip to Tokyo, along with a mea culpa to NeNe, and the group, at large, for leaving them out of her first bachelorette bash in Miami.

Later, at home, NeNe had bigger problems. She was beginning to get frustrated with her role as a constant caregiver to Gregg. He’d been grouchy and depressed following his cancer diagnosis and subsequent treatment, and NeNe felt he was taking it all out on her. She hired a vegan chef to help him with his new dietary restrictions, which only made matters worse, as Gregg was not the least bit interested in the clean eating menu she was proposing.

Gregg’s mood wasn’t much better at his birthday party. He’s just come from yet another trip to the emergency room following a hedge clipping accident that nearly left him short a finger. But in all, he was feeling happy to be celebrating another year after his health scare, as was NeNe, who got teary-eyed as Gregg gave a heartfelt toast thanking his friends and family for their love and support. But tears aside, she’s still going to need him to tone down that attitude.

Across town, Kandi, Marlo, and Eva were preparing to meet, I mean grill Cynthia’s new boo, Mike Hill at a local eatery. Cynthia was a little nervous because the last time the ladies had met one of her boyfriends they’d pretty much chased him off. Remember poor Will? He never stood a chance! They raked him over the coals just for having girlfriends before he met Cynthia. But as Mike said “this is Hill, not Will,”  and he came prepared to answer their very personal questions from what he loved most about Cynthia to his “go-to move” with her in the boudoir (why exactly do they care?!) to the “last time” he’d had an STD (good grief)! Mike handled it all in stride and even invited them to pull him aside and question him further if they needed to in the future. He may regret that later, but for now, all the ladies seemed to approve.

And in Porsha-ville, there seemed to be trouble afoot. After filling her baby daddy-to-be, Dennis in on her run-in with Kandi, she announced that she’d paid a visit to her therapist to discuss their relationship. She believes that she cut off her other suitor well before he did, and she wanted him to own up to the fact that he was still in contact with some of his exes, including the one she confronted at Todd’s party.

He admitted he was wrong, and assured her that all was well and that they were “on the same page” in their relationship, which seemed to calm her down–for the moment. The last thing she wants is to have a repeat of her marriage, where she was constantly trying to put a pretty facade on a relationship that was going downhill fast.

During her earlier therapy session, Porsha also admitted she was still getting to know Dennis while trying to build a foundation with him in their new relationship. A bit odd considering she’s already expecting his baby! Good luck with that Porsha!

As RHOA episodes go, this one was fairly benign, but the ladies are wheels up to Tokyo next week, and the people of Japan may never be the same. They haven’t had visitors quite this loud and destructive since Godzilla–stay tuned!