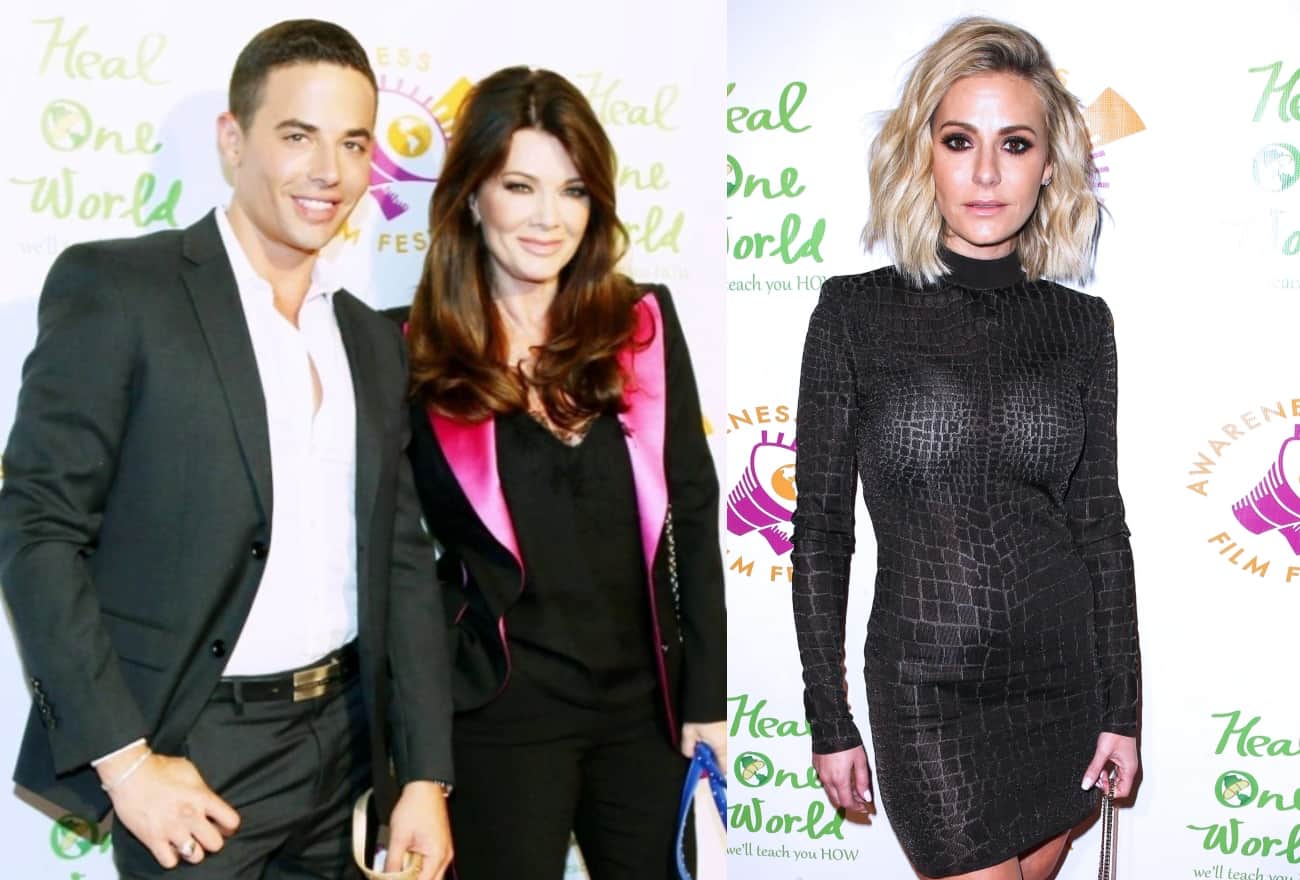 John Sessa is responding to Teddi Mellencamp‘s recent revelation regarding the full story she was supposedly encouraged to tell her Real Housewives of Beverly Hills co-stars about Dorit Kemsley and her adopted dog Lucy. Also below, Dorit is firing back at these claims as she’s slamming them as “lies” and sharing photos of Lucy to deny any mistreatment.

After Teddi claimed Lisa Vanderpump told John Blizzard to tell her that Dorit’s dog had allegedly been locked in a basement for months before it was given to another woman, who then took the animal to a shelter, the Vanderpump Dogs employee spoke out about the issue on Twitter.

“I’m aghast at the fact that Teddi would continue to reveil [sic] more information regarding a matter that has become very uncomfortable for our foundation,” he wrote. “We never intended for the extent of Lucy’s journey or the entirety of what was told to us by the shelter manager to be revealed.”

Following his statement, one Twitter user wrote a message back to Sessa that accused him of wanting the story to be made public. Sessa responded by seemingly confirming he was told the dog was locked up, but denied wanting the news to go public.

“I never wanted anyone to know that we were told the dog was locked in a cage for months – that was Teddi continually pushing this issue to the next level – bottom line – the dog is finally safe thanks to the diligence of our Foundation,” Sessa replied.

And just hours ago, two days after Sessa’s tweets, Dorit took to her Instagram Stories to vehemently deny any claims of locking up her former dog Lucy in a basement.

She first started out by sharing numerous photos of Lucy with her kids with captions to deny any abuse of the puppy.

“Locked in a cage? Unloved? Mistreated?” Dorit asked along with laughing emojis as she shared a picture of Lucy sitting in her son’s lap in a car.

She then shared more images and videos of Lucy with her young daughter. “Lucy didn’t partake in any family fun?” she asked sarcastically. “She was locked away in a cage, in our ‘basement’ which we don’t have!” 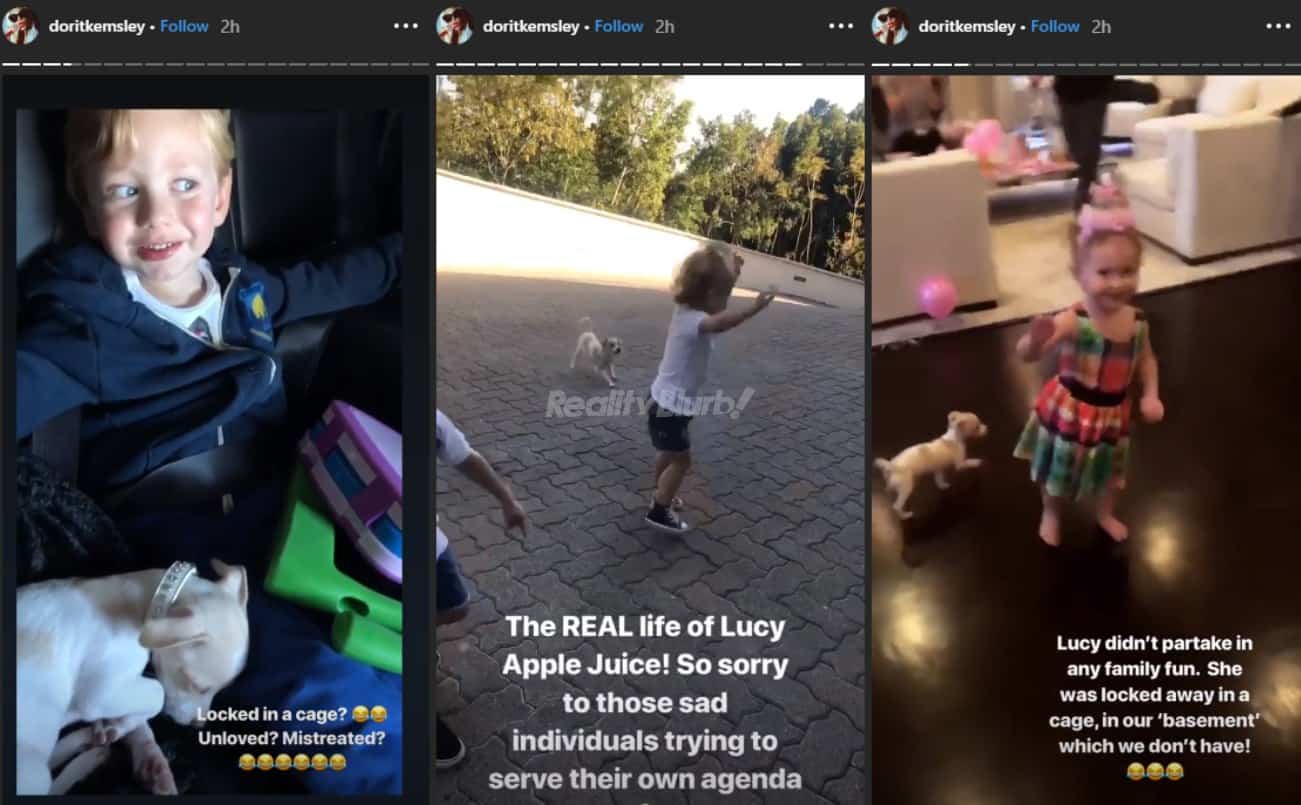 Dorit wasn’t done yet as she shared even more photos and video footage of Lucy, adding, “So sorry to those sad individuals trying to serve their own agenda.”

She then shared one more video of Lucy playing outdoors in the grass with the caption: “This is how I feel about the LIES, LIES, LIES!!!” More screenshots are below. You can click on the images to enlarge it. 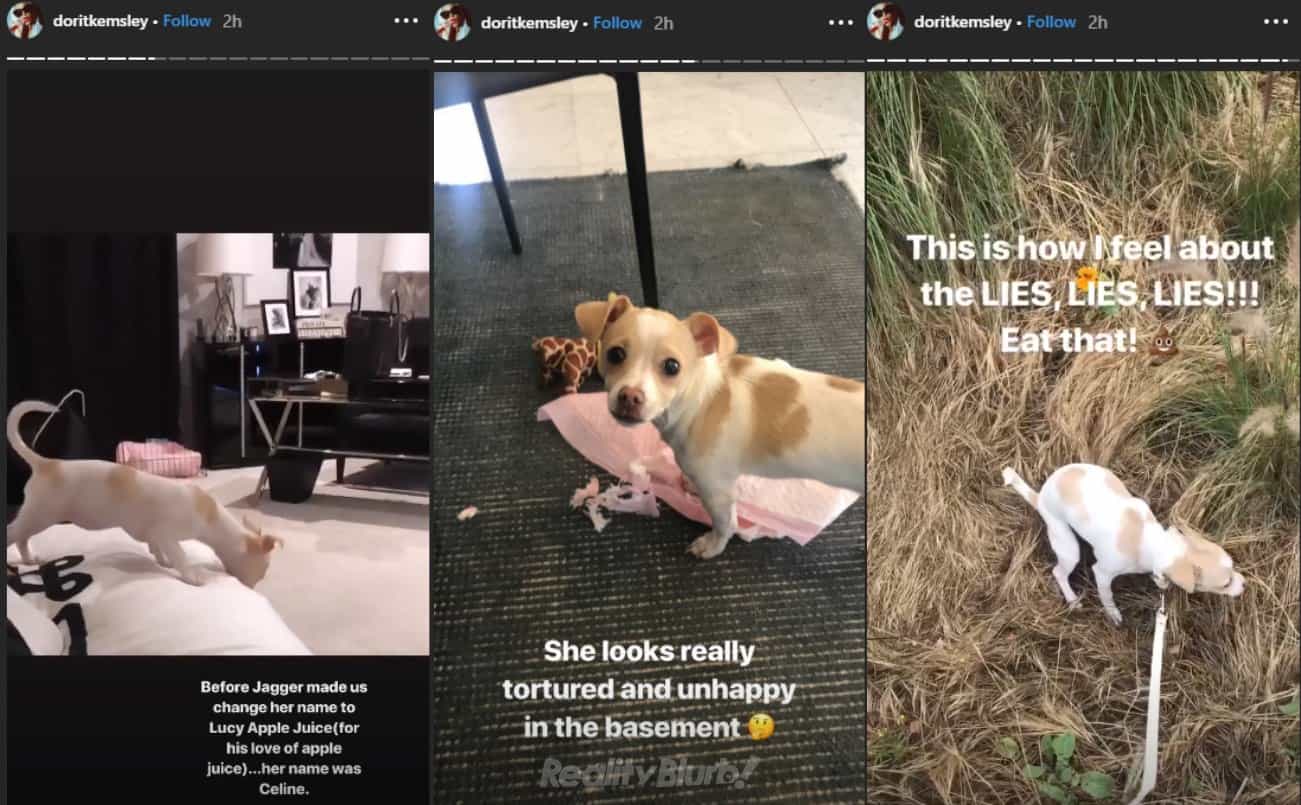 It is to be noted that while Teddi mentioned the dog being locked in a basement on the RHOBH, Sessa’s tweet only mentioned a cage.