The Real Housewives of Beverly Hills Recap: Lisa and Kyle’s Friendship Comes to an End After Ugly Confrontation 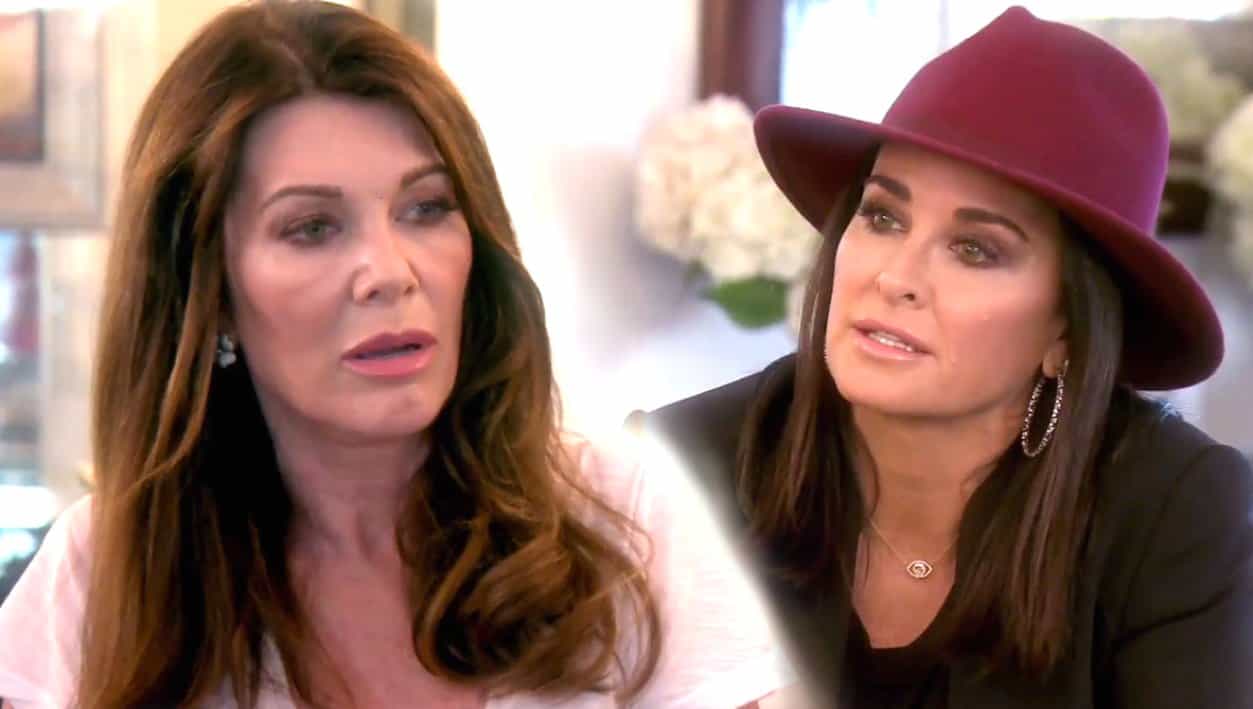 The ladies of the Real Housewives of Beverly Hills were back at it last night after that class act wedding.

Denise and Aaron have decided to postpone their honeymoon. They go through their cheesy wedding gifts and talk about their newly blended family. Denise shares that her daughter, Lola, told her that “I feel like now we have a family.” Denise cannot get over how patient her well-endowed hubby is with her kiddos and for that, and his penis, she is forever grateful.

Vanderpump Dogs gets a chance to have a dog compete in the Puppy Bowl, you know, that thing that comes on right before the Super Bowl that literally no one pays one bit of attention to. Nevertheless, LVP gets the chance to film a bit for the Puppy Bowl. She also shares that because of her efforts, Resolution 401 has been written to condemn the dog meat trade. This is an amazing step, as the idea of dog meat turns my stomach and I kind of just want to let the other women know that LVP is too damn busy to be wreaking havoc about Lucy the dog.

Anyway, LVP shares that there is an upcoming spin event and the proceeds will go towards Vanderpump Dogs. The only problem is that Teddi is hosting this event, because she is accountable and all. LVP states that,“I think Teddi is being a complete and utter b*tch….” BUT LVP still hopes that the fundraiser will go over well.

How terrifying does Teddi’s husband, Edwin, look? Half skeleton/ half fitness buff. 100% creepy. Teddi chats with Edwin about the spin event and because her company has partnered with Vanderpump Dogs in the past and because she wants to stay true to her commitment to the fundraiser despite the recent drama, the spinning must go on.

On cue, Dorit phones Teddi to lament about the Radar Online news article. Teddi cannot get over the fact that Dorit and LVP seemed fine together at Denise’s wedding, but in reality, someone (perhaps LVP??) leaked puppy-gate to the press. Dorit decides to suck it up and attend the event even though there is a strong possibility of running into her bully, LVP.

The day of the spin event, Rinna, Erika, Kyle, Denise, and Dorit come to support the cause. Leave it to Rinna to bring up THE article. Rinna and Erika let Dorit know that they KNOW it was LVP who leaked the news. The women find it hilarious that LVP isn’t at the event for her business, but has no problem stirring up drama in the papers. Well, I mean, she’s squealing to Radar Online whilst attempting to pass Resolution 401 with a congressman. A day in the life…

The spin class begins and all of the women are there (sans LVP). I’m not sure if Erika is actually participating or not, but the class wraps up, and Teddi makes a passive/aggressive speech. She ends it with a simple zinger: “Regardless of the circumstances, real friends show up.” Buuuuurn.
Post spin class, the ladies paint their faces and head out to lunch. They will undoubtedly use this time to be catty AF and talk as much sh*t as possible about LVP. The jealous women cannot wrap their pea brains around the fact that LVP had not one, but two events, on the same day…nor can they begin to fathom the importance of what LVP could potentially be celebrating at that very moment.

LVP and her Vanderpump Dogs crew watch as Resolution 401 make it to the floor and they hold a viewing party. The only problem is that they cannot translate the verbiage of the congressman and after far too much confusion, they realize that the dog and cat meat trade bill has actually been passed. In the words of LVP, nothing else matters. Maybe she should tell that to Dorit and the gang. Their little worlds couldn’t handle one ounce of what LVP goes through on the reg.

Over lunch, Dorit states that she “knows” LVP wrote the Radar Online article and Kyle feigns sticking up for LVP. In fact, everyone believes that LVP “manipulated the truth.” As a matter of fact, “I was taught by Lisa Vanderpump on HOW to plant an article.” Thanks, Rinna. Kyle gets put in a compromising situation by a simple question, “have you ever known LVP to leak stuff to the press?” Kyle dances around it, but eventually shares that she may believe that LVP is responsible for the article. The women pressure Kyle to ask LVP exactly how she is involved. Denise reminds Dorit that over time, the truth will reveal itself. She should know. Homegirl has found herself in many messy news articles. “Victim” Dorit cries over the “untrue” words and worries that her children may become negatively affected by the mean statements.

Kyle swings by her friend Sharon’s house and Teddi pays a visit, as well. Kyle’s home was burglarized and conveniently, Sharon is a jeweler who is able to recreate many of the rings Kyle lost. A good friend to have, huh? Teddi spills that after lunch the other day, she found out that LVP went to TMZ (ya follow that?) to defend Dorit from the Radar Online words. This is getting too much. “The extent to which it has gone through…” Here’s an idea. Teddi, Dorit, and LVP sit down together and hash it out. There are way too many cooks in the kitchen and rumors circulating. This could all be quieted by involving only those involved. Novel idea.

So, HarryHamlin is still alive. We haven’t seen him or heard from him and it turns out it’s because he goes solo hiking and I am going to assume it’s because he cannot stand his wife, along with the rest of America. Rinna gives him a quick recap of her life these days and you better believe dog gate gets shared. HarryHamlin looks like he wishes he was on the mountain at that very moment and explains that whatever is occurring is simply propaganda. What is this guy on?

It didn’t take much to twist Kyle’s arm to get her involved. She is on her merry way to LVP’s house to confront her about the articles and to find out the truth. I’m sorry. I don’t quite remember when Kyle became part of this equation, but alas, there she is, right in the middle of it.

Poor LVP has no idea that Kyle is coming to bring up an incredibly inappropriate conversation. LVP wants to actually talk about important things like Resolution 401, but Kyle can’t handle it. Kyle lets LVP know that Dorit …and everyone else…believes LVP is to blame for the Radar Online leak. Kyle further explains that Dorit was devastated and LVP shrieks, “I’m not thinking about Dorit and the f*cking dog.” Sidenote: Where did Ken come from? Kyle tries to tell LVP that she’s here as her friend… And to that, LVP announces, “I’ve done nothing wrong. I am a woman with integrity.”

LVP swears on her children’s life that she would never give a story to Radar. Okay, a bit convincing. She however takes things a step further and swears on Giggy’s life! Okay, LVP means business!

Kyle is NOT convinced however and states that maybe she cares more about her image than her friendships. Look what ya did, Kyle. Ken hollers at Kyle and tells her she’s a “f*cking liar and you’re not her friend or my friend. Please go and join the gang.” Ken doesn’t want to hear it and I am so proud of SOMEONE standing up to Kyle after 12 years of friendship. LVP refuses to be called a liar, but despite all of this, Kyle still believes that LVP is really the true puppet master…

TELL US – WHAT ARE YOUR THOUGHTS ON THE RHOBH EPISODE? DO YOU BELIEVE LISA LEAKED THE STORY? DID LISA AND KEN OVERREACT?