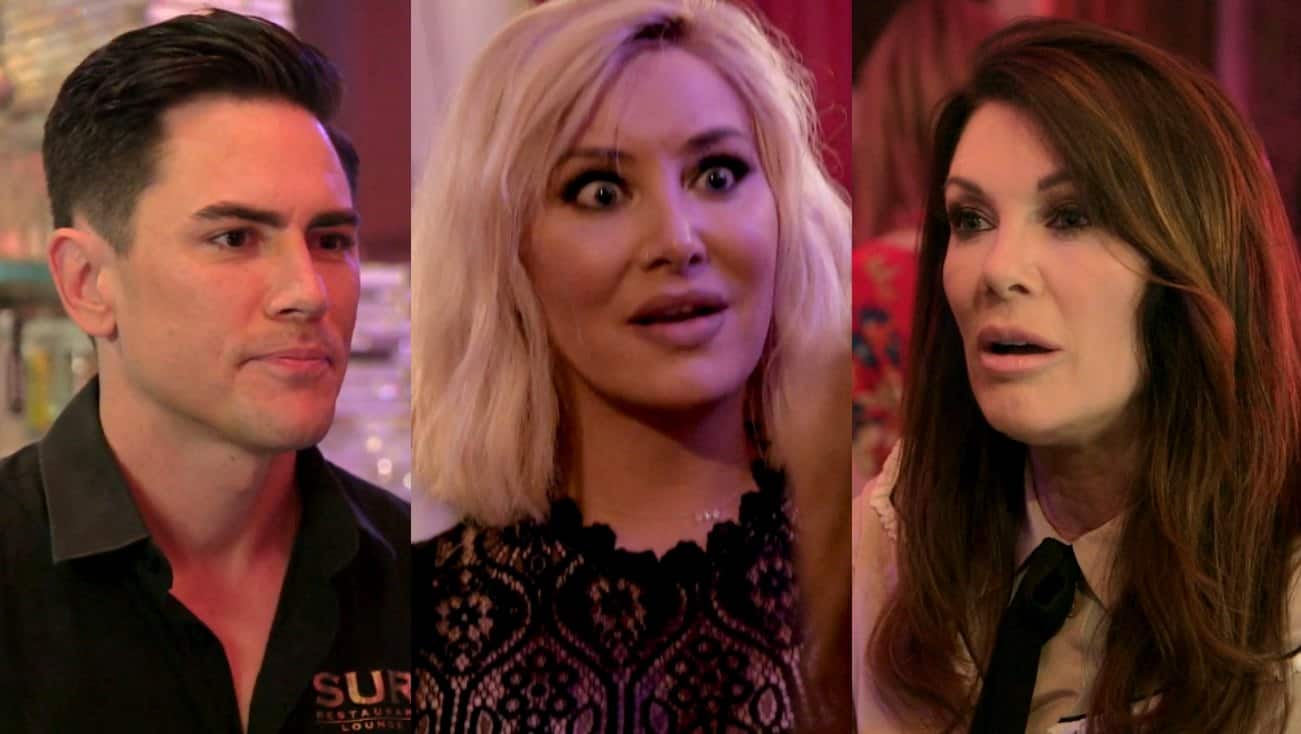 On this episode of Vanderpump Rules Scheana, her scrunchie, and LaLa have somehow reserved a private pool area (LaLa’s sugar daddy perhaps?) where the ladies discuss LaLa’s anxiety attack the night before. “What triggered me? It’s like the weirdest thing.” Yea LaLa, I’m gonna have to guess it was the excessive alcohol, mixed with the recent passing of your dad and whatever the heck drug you may or may not have been taking.

Is Beau actually battered? Did anyone catch the odd red marks on this arm? Oh wait. It’s “eczema stress hives.” Is that a thing? Sounds like he is in denial about their relationship. Beau reminds Stassi that he was “bawling my eyes out last night” and Stassi feels no remorse because she is as cold as ice.

Schwartzie, Sandoval, and Ariana gather for some beach shots and sex talk. Schwartzie, as usual, shares how things have been hot and cold in the bedroom with Katie. I can’t imagine why….“Tell me you guys go through lulls.” What is with this crew always oversharing their sex lives? Also, why is Sandoval wearing Ariana’s shirt as a cover-up? Because Schwartzie feels like Katie deserves some extra attention after her glorious behavior this trip, he has decided to become “Tom Juan, the world’s greatest lover.”

Back in reality…kind of…LVP pays a visit to SUR. She bumps into Adam, the barback/Scheana’s BFF/lover. Adam becomes defensive and demands that LVP “don’t say we’re an item. Especially in front of her, please.” Man, Adam is throwing Scheana RIGHT under that bus. He shows LVP the raunchy pics she has sent him and claims he is afraid she may get too attached. I think it’s too late for that, Adam.

“One, two, three, four…” the old mantra that LaLa repeats as she settles in for the group dinner in Mexico doesn’t seem to be cutting it. LaLa looks like she is legit about to lose her damn mind and is demanding everyone squeeze “the f*ck” out of her hand. Only Stassi has enough balls to question LaLa’s behavior, but once late night rolls around, more of the gang talks about LaLa and her “techniques” to heal.

Scheana, Ariana, Sandoval, and Kristen sit around chatting about all of the attention LaLa was seeking due to her anxiety attack. Scheana points out that she wasn’t the one LaLa wanted to make out with the night before….I mean, not like she “cares…” but it just seems like LaLa only wants Scheana when she needs help. I think Scheana is just hurt that she can’t even seem enticing to LaLa, let alone Adam.

Woah- Schwartzie for the win! Tom Juan set up the “ultimate romantic heist.” He truly knows the way to Katie’s heart, huh? He went all out with the junk food and for once in her life, Katie is speechless. Schwartzie meows and surprises Katie further with a violinist who steps out of the shower. The couple cuddles whilst the woman awkwardly plays and I am pretty sure that Katie is more excited for the violinist to leave so she can eat the Cheetos. Success!

Somehow, Kristen and Ariana have become friendly. You know, just the kind of friends that text and sometimes drunkenly make out. Did we all forget that there was once a messy love triangle just a few seasons ago?! While attempting to pack up to head home, Jax and Brittany discuss the engagement party…and you guessed it…the cost. Jax freaks out, but also decides to not invite his mother to the party. He hasn’t spoken to her for about 8 months since the passing of his father. Jax stands strong on his no Billie Lee campaign, as well. At $70 a plate, you have to draw the line somewhere…

Ah…the B team of Vanderpump Rules gets some screen time. It turns out that Raquel, James’s girlfriend, is hosting a “puppy shower/puppy pawty” for her dog. I can’t. Billie Lee, James, and Raquel pay a visit to Vanderpump Dogs and talk guest list. This is like their payback for all of the times they were disinvited to trips and events. Except for no one really wants to go to this shower so there’s that…

Billie reminds the couple that she is hosting a white party at SUR and she realllllly wants James to DJ the event. Billie also brings up LaLa and states that she is a bully and “the ultimate mean girl.”

SUR is fully staffed again. All is well in the world. Behind the bar, Jax can’t seem to fathom how Sandoval will be able to juggle SUR and TomTom. Because of his chronic unemployment, Schwartzie is able to “work the crowd” at TomTom, which causes some serious FOMO for Sandoval. Raquel emerges from nowhere and comes to invite Brittany and Jax to Graham the dog’s puppy shower. Even as she is extending the invite, you can totally tell that she knows that this is a ridiculous concept. Jax and Brittany respectfully decline the “party of the year.”

LVP in the house. She lets LaLa know that she cannot wear “strip club attire” as the hostess and makes her rounds around the restaurant. She gets to talking to Billie Lee and tells her that James cannot DJ her upcoming party. Billie is furious. She takes her anger out on LaLa and LVP…“I love how she can run around work half naked and be a b*tch, but James…I’m gonna go breathe cuz I’m getting p*ssed off.” Oh no she didn’t. LVP makes it clear that she will not tolerate being spoken to that way and puts Billie back in her place…well for the time being.

Billie lets Scheana know that she just got into it with LVP over James. Scheana claims that she understands, as James is her best friend (how many BFFs does one girl have and is James the same type of best friend as Adam? Hmmm…). In a tizzy, Scheana spills that Billie is not invited to Jax and Brittany’s engagement party. “They don’t want you there because you remind them of James.” Scheana, Scheana, Scheana. Loose lips. Billie Lee is inconsolable and you know it’s because she is realizing her screen time is dwindling. Naturally, Billie confronts Brittany about not being invited to the engagement party and begs to be included. So much for the puppy party/white party comeback.

Boy, Raquel is just making her rounds at these restaurants. The desperation to get the group to attend her puppy shower is absolutely pathetic. She pops into TomTom and lets Stassi and Schwartzie know that they made the cut. Stassi declines after ripping her idea apart (rightfully so) and obviously Schwartzie just stands around dumbly because using too much brain power may give him wrinkles.

Back at SUR, LVP finds Sandoval and reminds him that he needs to be at TomTom, so therefore, she fires him from SUR…this way he can spend all of his time at TomTom. Sandoval gets all emo about leaving SUR, but when LVP welcomes Sandoval “home” with Schwartzie at TomTom, I think he forgets all about SUR and the drama. I was wondering where LVP was going as she made the boys rattle on and on about what it means to be a business partner. LVP pauses, explains that finances are an important role, and then tells Schwartzie, “Ah the checks…they both bounced.” Holy awkward.

Schwartzie looks SO bad, but somehow not as bad as James and Raquel. Raquel reports back to James that essentially no one will be attending their party because of James. James is furious cuz he “made all of these flyers” and Raquel is frustrated that she can’t make friends come to her puppy party. Is this the Twilight Zone?