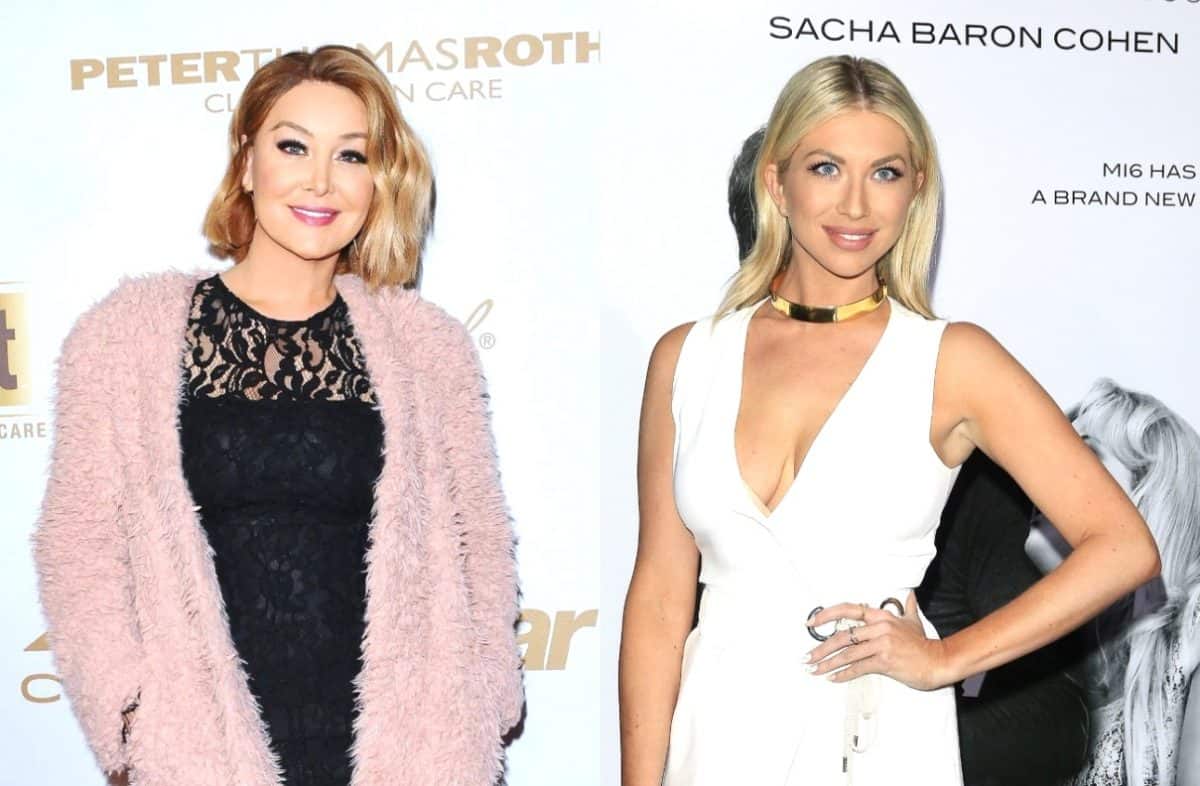 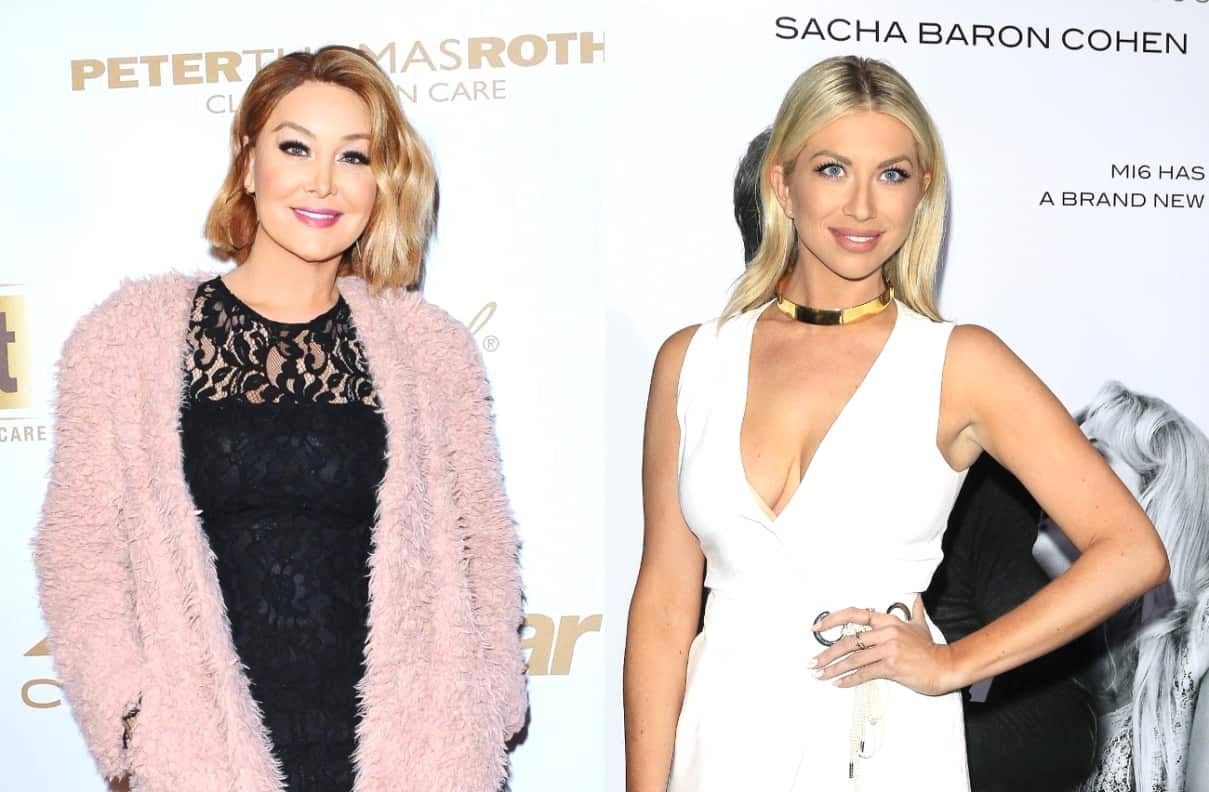 Billie Lee is fighting back against Stassi Schroeder after Stassi slammed her “ridiculous” behavior during an interview on The Jenny McCarthy Show earlier this week.

While promoting her new book, Next Level Basic, the Vanderpump Rules star took aim at Billie for failing to be “kind and friendly” to her and her co-stars and accused her of trying to start fights. In response, Billie said Stassi was the “most white cis privileged mean girl” she’s ever met.

“The things she tries to fight about is ridiculous,” Stassi said on April 16. “‘I’m literally, I’m like, ‘You don’t even go here!’ — that’s what it feels like.”

“If she was actually nice and kind and friendly to us, I think she would [fit in], but to just expect to be invited to every little thing we do, when we don’t know you, and pitch a fit when you’re not, acting like we’ve been friends for years? I’m like you’ve just met us, so, no, you’re not coming to my little four-girl wine night. I’m like I don’t know you.” she continued.

Stassi went on to say that she doesn’t feel bad for the “new people” of Vanderpump Rules. Instead, she wishes they “would just leave.”

“They come in and they think they’re about to be a star, and it’s, like, ‘You have no idea what’s coming for you,’” she added.

In response to Stassi’s comments, Billie shared a couple of posts on Instagram in which she slammed her “privileged” co-star and accused her of making “ignorant comments about black people.”

“So gender sensitivity is ridiculous?” Billie asked. “Wow I’m really dealing with a mean girl who jokes about how fun it is to be a mean girl. I’m sorry I actually work at SUR do you Stassi?” 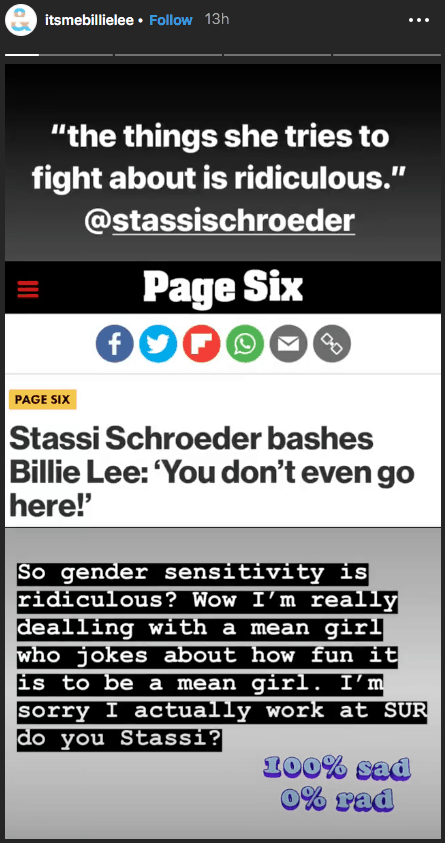 In her second post, Billie said she was dealing with “the most white cis privileged mean girl I’ve ever met.”

“When I first started at SUR I was warned by a few close friends that actually work at SUR to be careful with Stassi,” Billie revealed. “She makes ignorant comments about black people and she comes from a white privileged perception. When I confronted her about these allegations she immediately became the victim crying so hard her lashes came off. Now here I am dealing with exactly what they all warned me about. Fighting for diversity and inclusion at the work place is not ridiculous!” 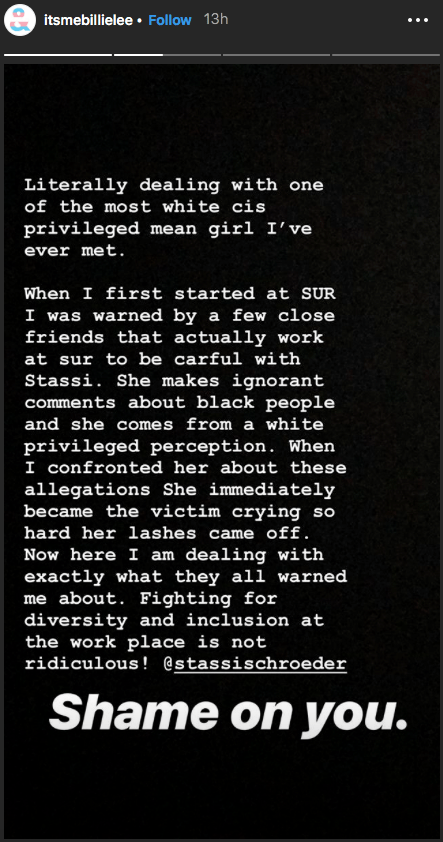 “I’ve never fought with you [Stassi] and I for sure never tried to be bffs with you,” she wrote. “I don’t recall missing out of a wine night of only four? So to call me mean is another crazy accusation. All from someone I’ve barely hung out with.”

I’ve never fought with you @stassi and I for sure never tried to be bffs with you. I don’t recall missing out of a wine night of only four? So to call me mean is another crazy accusation. All from someone I’ve barely hung out with. ?✌?

In her second tweet, Billie slammed Stassi for throwing her under the bus in an effort to get publicity for her new book.

“Oh wait! Is someone selling a book?” she asked. “Throwing the newbies under the bus so you make headlines. @stassi You will not use my story to sell your basic a** book.”

Oh wait! Is someone selling a book? Throwing the newbies under the bus so you make headlines. @stassi You will not use my story to sell your basic ass book. ?✌?

Follow us and get the latest news delivered to your timeline!
Billie LeeStassi SchroederVanderpump Rules