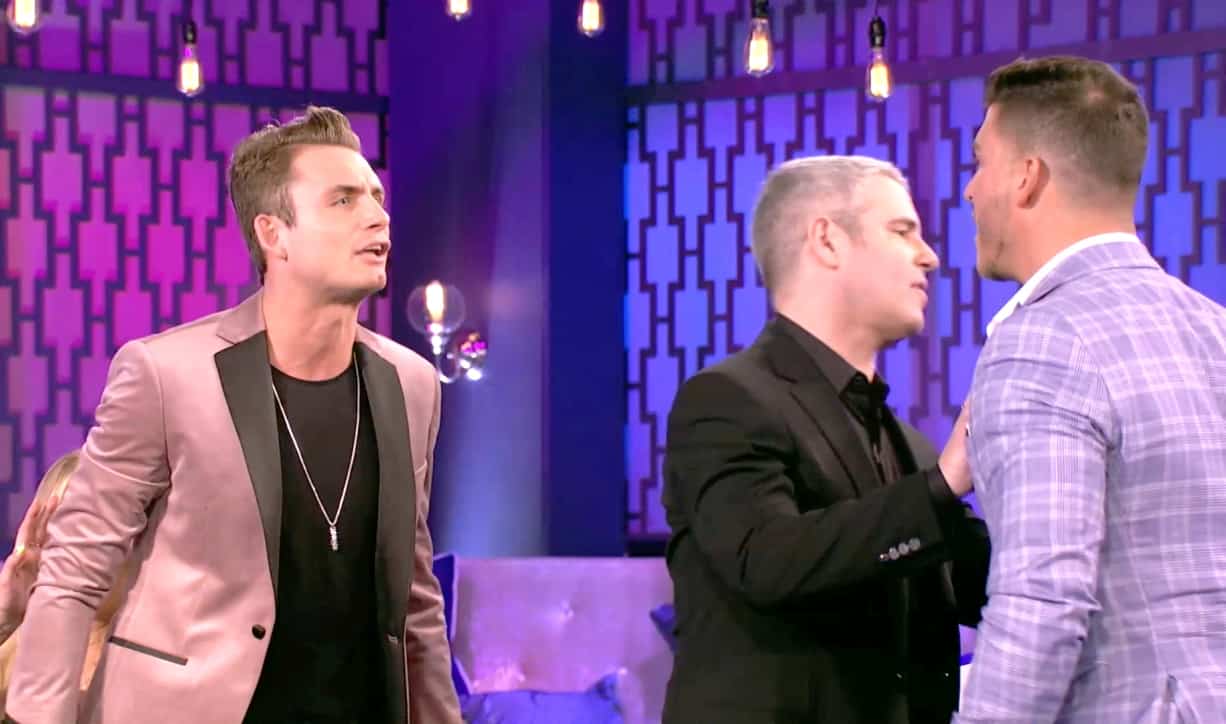 It’s the 7th season of Vanderpump Rules and the first part of the reunion with this wild crew.

Andy welcomes the glittery and tan cast and they all look ready to rumble. Andy asks Sandoval if he “feels like a man” since becoming part owner of TomTom, cheers Brittany on with wedding planning, and congratulates LaLa on her recent engagement to her “daddy,” Randall. Why is James and his clefted chin even invited to the reunion? We all know he’s just gonna have a meltdown and cause a raucous. Wait- Why does no one know that Kristen is single? Not even one of her witches of WeHo?!

But, yes, Kristen reveals she has broken up with long-term boyfriend Carter but doesn’t go into details about the split or what caused it. Perhaps Andy will press her on that during a later part of the reunion!

The first issue Andy tackles is the rap James spit about Jax and Faith. James claims it was simply a “freestyle” and “freedom of expression.” At this point, James is still really only friends with a handful of the group and he is clinging on for dear life to stay included in this cast. “It’s hard to be excluded from something you have never been a part of.” LaLa claims that she misses her friendship with James (“one of the funnest”, in LaLa’s words), but his lack of regret and remorse is hurtful and baffling. James yells that he doesn’t need LaLa’s friendship and loses his cool, once again proving, that alas, he has not changed.

Last season Scheana was “Rob-sessed” and this season she was juuuust “best friend” crazy. Sprinkled in, she got some action with “f*ck boys” that she’s just dating because “they’re fun to hang out with”…and nice to look at, too. Right on, Scheana. You tell them. That sounds like a defense mechanism for a girl who desperately seeks a male partner and wants to be married again like…yesterday.

Re-watching the Jax and Brittany’s engagement makes me gag all over again. Jax and Brittany have decided not to get a prenup, but LaLa, on the other hand, …there’s no chance of her getting the PJ cuz homegirl has to sign a prenup. When LaLa relives her engagement, you can see Jax getting antsy because his crab proposal looks weak AF compared to Randall’s over the top moment. LaLa makes a rude statement towards Stassi when she insinuates that her fiancé isn’t on the show because he has other more important things going on. Ouch. Even LVP believes that Randall belongs on the show and cannot quite understand LaLa’s justifications.

Andy loves to stir the pot and needs to know the timeline on who was responsible for making the cocktails for TomTom and why. LVP listens as Schwartzie and Sandoval explain how slighted they felt when another mixologist came in and changed their drink menu up. Ariana chimes in and wants to know why all of the Toms’ ideas didn’t make the final cut. LVP blames Ken, since he “planned out the bar” and Ariana explains that LVP gives more respect to the guys off camera than on camera. Sandoval reminds LVP that he always gives 100% (take past Halloween costumes, for example) and can’t fathom why LVP would bust his chops incessantly.

Jax is confused when he hears the Toms haven’t been paid yet, but do I need to remind everyone just how much Tweedle Dee and Tweedle Dum actually invested into this “partnership?” LVP offers to give Sandoval the money back now to alleviate some of the awkwardness. She reminds the boys of the “fun side,” ie: Schwartzie’s James Bond moment with a briefcase full o’ cash.

In walks Raquel looking like a DIY craft project gone bad. She dons a ruffled mini dress and is ready to defend her relationship with James. Raquel shares that she will be working at SUR coming soon (woof) because she gets along swimmingly with the majority of the staff there ?. Andy wants to hear about the gay pride parade drama where Raquel heard all about James’s “cheating.” No one can quite understand how Raquel could possibly brush off ALL of the rumors. Raquel explains that she knows she is a “beauty queen” who could seemingly come off as someone hungry for screen time (which she is) and Jax immediately jumps on that statement. 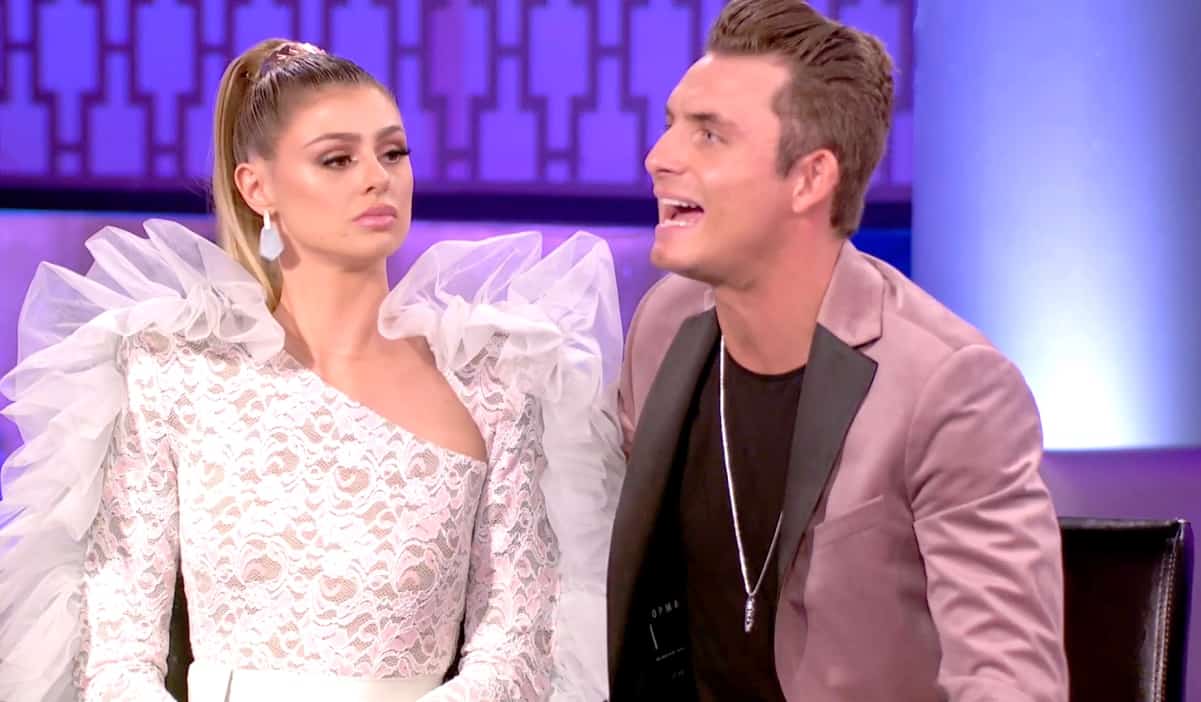 Brittany was also a beauty queen, but does not parade that tidbit of information around. Back and forth they go until Ariana shrieks, “shut up” to Jax and Brittany. Hold up- why does no one attack Brittany for sticking with Jax the way they attack Raquel for sticking with James? Very hypocritical.

James, ever the mature gentleman, yells at SOMEONE (hard to tell at who since there is SO much yelling going on), “I see poop coming out of your mouth.” Ariana, once again, tries to play peacekeeper and explains that Raquel and James didn’t live together before, so really, it’s like a clean slate for the couple and past cheating rumors are part of the past. PS- Did you all forget that Raquel has a college degree?! How can one girl be so educated, yet host something called a PUPPY PARTY?

Andy would like to know why LaLa has such beef with Raquel. “Just because you have a vagina doesn’t mean that I’m going to support you.” LaLa, Miss Women Empowerment herself, states that she has a hard time supporting someone who doesn’t step up for her when she needs them. Stassi explains that it’s hard to connect with Raquel because they can’t understand how a person could possibly date James Kennedy seriously. Throughout it all, Raquel’s voice wavers as if she is either terrified or she is about to lose her sh*t.

The whole “dad blaming” situation comes up and LaLa has zero tolerance for Raquel’s words. LVP reminds LaLa that grief isn’t an excuse to lash out. Raquel ends the segment by saying that the couple is very happy raising Graham together (THAT’S THEIR DOG) and this girl would prefer turning a blind eye to James’s erratic behavior rather than address the obvious issues.

LVP is asked how she has been coping since the passing of her brother. It’s still hard for LVP to discuss this and she becomes emotional talking about going to a grief counselor and getting in touch with her feelings. She leaves the set to get herself together and LaLa is asked about her father’s death. She shares the difficult end and Jax lets Andy know that he still has no relationship with his mother after his dad’s passing. The issue was that Jax’s mom never told him that his father was failing so quickly. He didn’t even know he was in ICU. Crazy.

James apologizes for his insensitive tweets about the passing of Jax’s dad, but reminds Jax that he did make some nasty tweets about Raquel, so it was kinda justified. Suddenly, a fight erupts. “You wanna talk about bad Tweets?” “You wanna talk about my dad?” Jax and James sling insults back and forth and James yells out, “Go to Kentucky. You belong there with those hillbillies.” Brittany tells James that at least she is not a sh*tty person like he is. James gets PURPLE in the face because he is so frazzled after Jax calls Raquel dumb. This fight becomes painfully laughable, especially when Sandoval gets verbally assaulted for joining #teamJames. Somewhere in the middle of all of this, LVP makes her way back onto the set. I can’t believe that Andy lets this go on as long as it does, and finally, after what feels like a fight that lasted 15 minutes, he yells, “guys, shut the f*ck up!” Hallelujah!!!!

TELL US – THOUGHTS ON THE VANDERPUMP RULES REUNION PART 1?