by Lindsay Cronin May 21, 2018 16 comments
ShareTweetWhatsappPinterestRedditTumblrMailFlipboard 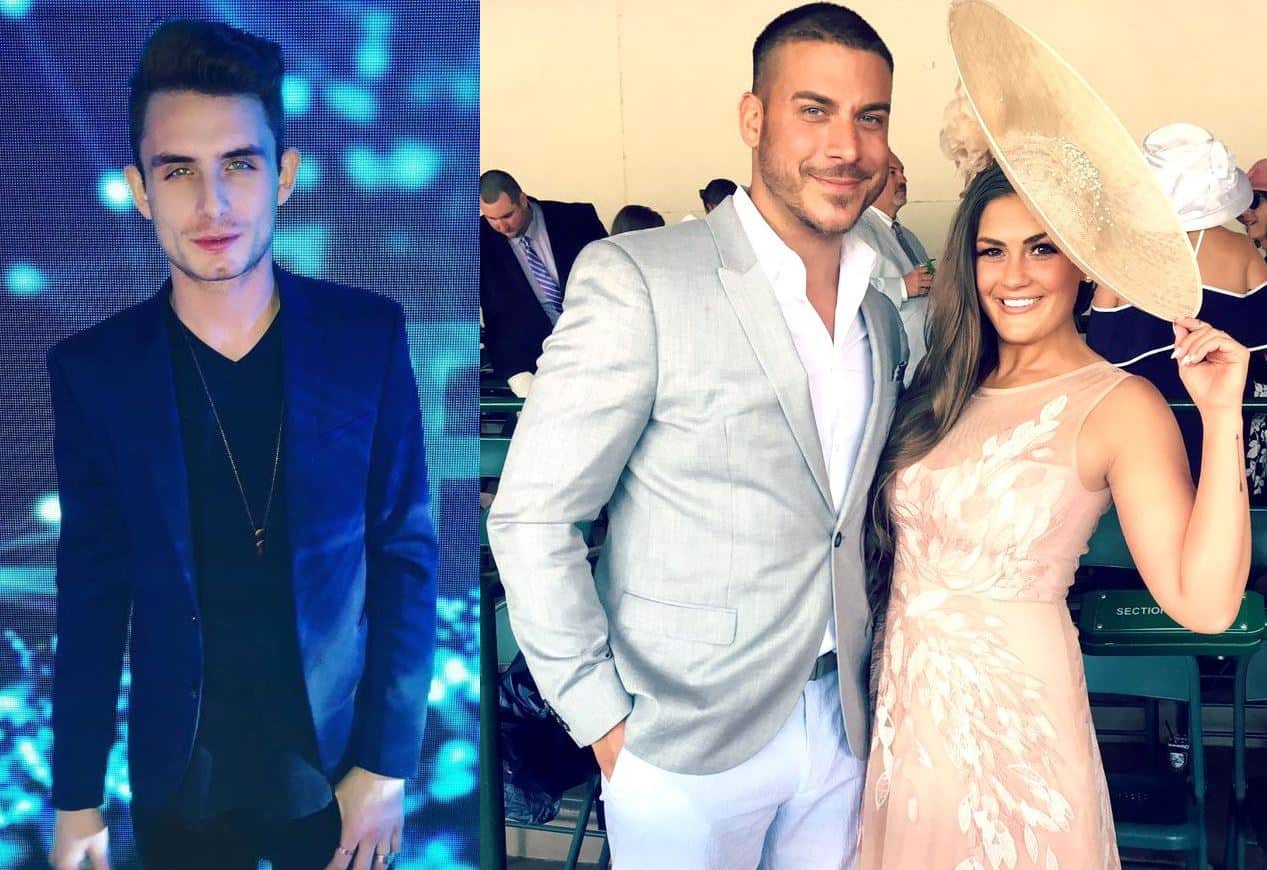 Jax Taylor and James Kennedy recently almost came to blows at SUR Restaurant last week after James made Brittany Cartwright cry by bringing up Jax’s past affair with Faith Stowers with an odd rap at the restaurant where Vanderpump Rules is filmed.

The next day, while appearing on an episode of the Pump Rules Podcast, James spoke of the encounter with Jax.

“I had many one too many of the Pumptinis last night and I brought up the whole Faith thing again… over the mic. I was just like, ‘Oh hey, you banged Faith, remember?’ I just reminded everyone and I didn’t know Brittany was in the room at the time,” James explained.

However, according to Tom Sandoval, who was also present during the podcast, there was a bit more to the story.

“No! Who said that?” James asked. “If Scheana said that, then maybe I did that… maybe. But I apologized this morning. I said, ‘I’m sorry’ to Jax. He’s still very angry with me.”

“He’s a nice guy. We’ve been on a great path so far. I made a little mistake last night. Perfect timing since filming starts in two weeks. I must say. You gotta keep it spicy somehow!” he continued.

As the conversation went on, Tom attempted to explain why James shouldn’t have thrown Jax and Faith’s 2017 rendezvous in his face but also said that Jax brought it on himself when he decided to cheat on girlfriend Brittany Cartwright.

“Part of me thinks of this like, ‘Jax, you should have just never f**ked Faith,'” Tom pointed out.

“Or maybe you shouldn’t have your own TV show with maybe an obnoxious, better looking version of you 10 years ago that’s also on it, that also runs SUR on a Tuesday f**king night,” James interjected. “So you know what? Freedom of speech! I apologized for what I said.”

“What you should have thought about in that moment was Brittany,” Tom suggested. “That’s embarrassing to her.”

“I’m definitely am so sorry to Brittany. She is an amazing person and I don’t want to disrespect her like that. I couldn’t imagine being in that situation. I was in the wrong,” James replied.

Unfortunately for James, Jax is not yet ready to make nice as he took to his Twitter over the weekend to issue more threats to James.

When a Twitter user tweeted to Jax that James needs to get his other leg broken, Jax responded: “Don’t worry it’s coming this year…”  James had mentioned on the show this season that some bullies broke his leg while he was a young boy growing up in England. 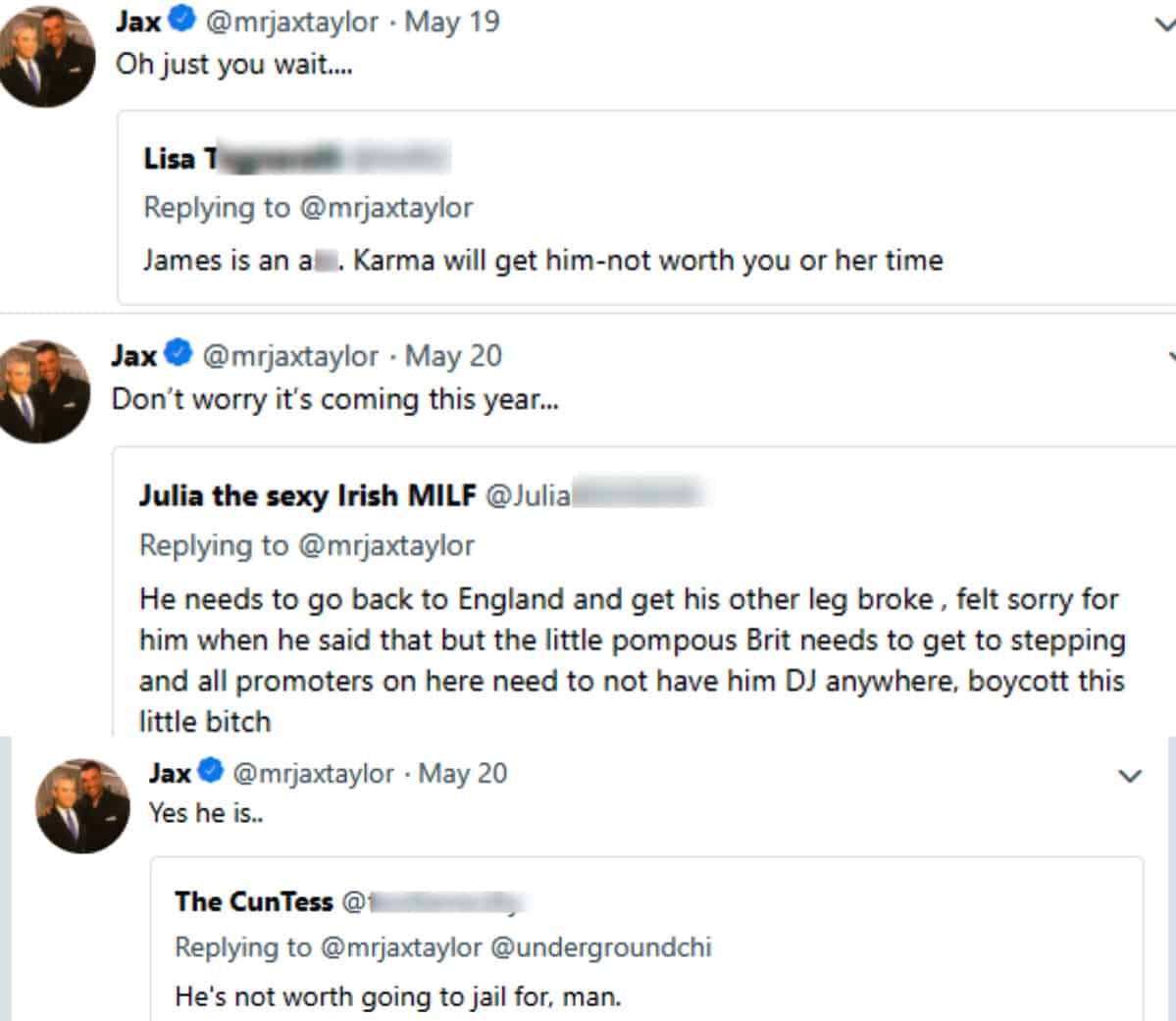 During an appearance on Jeff Lewis Live days ago, Jax gave his own account of what took place at SUR last Tuesday night and in his story, Jax said James was well-aware that Brittany was present when he brought up his past hookup with Faith.

“Brittany went in to go see him and say hi Tuesday night at SUR. He literally gave her a hug, she walked maybe four feet away, and he started rapping a song called Jax and Faith. And Brittany started bawling her eyes out,” Jax revealed. “Crying, embarrassed in front of everybody at SUR and she had to be escorted out. She was literally mortified.”

“How could you do that to somebody and literally look her in the face and start rapping about this? It’s on, and sh*t’s going to come out about you, and I’m not going to hold back,” Jax warned.

Part III of the Vanderpump Rules reunion airs tonight on Bravo at 9/8c.