The Real Housewives of Potomac Recap: Michael Drops a Bombshell While Drunk?

by Tiffany Brown May 20, 2019 8 comments
ShareTweetWhatsappPinterestRedditTumblrMailFlipboard 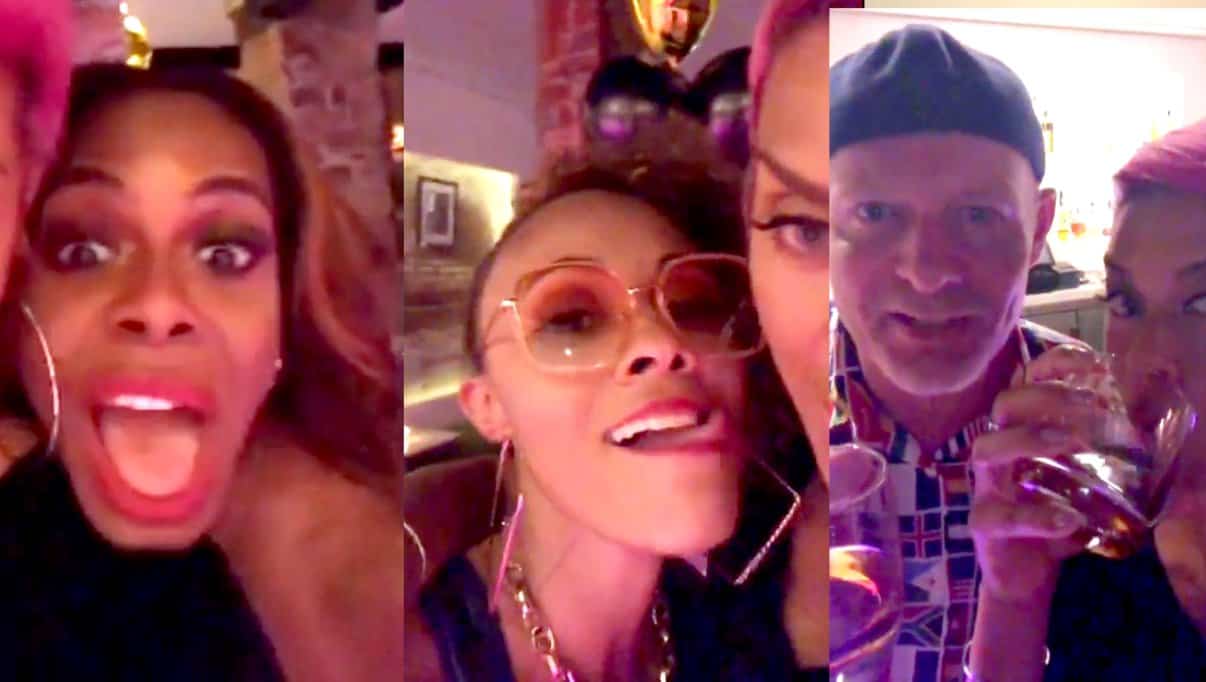 It’s always a dead giveaway when a housewives episodes hit you with that prologue.  You can guess from there that there will be plenty of drama to come, and that it will all pertain to this one scene that is so juicy, they had to show you how it ended before they could show you how it started.

This was certainly the case with last night’s episode of The Real Housewives of Potomac, which began with Ashley’s husband, Michael Darby, chatting up several of the more attractive male guests in a pretty provocative way, while dressed in overalls circa The Fresh Prince of Bel Air. It begged the question: how in the world did we get here?! Well, here goes:

The episode rewound to earlier in the week.  Ashley had her mother, Sheila, over to the home she shares with Michael for the first time in a long time.  The three of them haven’t gotten along too well since Sheila refused to break up with a boyfriend Michael and Ashley didn’t approve of, and even moved him into the home they were paying for her to live in.

But things have changed.  Sheila has become more independent, and Ashley suffered a devastating miscarriage, which feels has brought her family, including her mother and Michael closer together as they grieved the loss.  Ashley teared up as her mother and husband hugged each other for the first time in what felt like ages, and she was really hoping that their good spirits would carry over to her beloved Uncle Lumpy.  He too had issues with Michael, and once warned his niece that he believed Michael was only interested in being married to her because she was a pretty trophy to have on his arm. It was pretty brutal, but bother Michael and Sheila assure Ashley that all will be fine when the two men come face to face at the 90s themed birthday party she was planning.  She didn’t seem convinced.

Ashley invited all of the ladies to this family party she was throwing for her uncle, and was disappointed with both Monique and Karen who declined to come.  She’d been hoping the party would give them all a chance to air out their grievances. How odd!  I thought the party was supposed to be for her uncle’s birthday, and here she’d been planning on having it out with the ladies over last season’s unresolved shenanigans?

All the same Candiace, Gizelle, and Robyn attended, and Gizelle even brought a surprise plus-one.  No, it wasn’t Sherman–she was still done with him.  But while discussing their most recent break up with her therapist, Dr. Ken, he convinced her to be a little more forgiving, and to give people a chance, rather than cutting them completely out of her life at the slightest offense.  Dr. Ken seemed to be implying that she should give Sherman another change, despite the fact that he waited until two hours before Candiace’s wedding to tell her he wouldn’t be escorting her, but it sounds like it’s a little too late for that.

But Gizelle did seem to take his talk about forgiveness to heart, and she called her old friend, Katie, who many loyal fans of the show will remember from season one.  The two had been frienemies, and had ended on bad terms that mostly seemed to involve Katie getting a little too drunk and messy at parties, and shooting off her mouth.  But that was all water under the bridge, Gizelle decided, and she invited her out to lunch.  When that went well enough, she invited her to come along to Ashley’s uncle’s birthday party.

And Gizelle didn’t stop there.  She also made amends with Karen.  She showed up at her house, and the two women had a very friendly and pleasant visit together, although Gizelle remains suspicious about Karen’s true living arrangements.  You see, the Grande Dame would only allow Gizelle to see two rooms of her Grand Estate, and Gizelle wondered if she secretly lived in the basement.

In an effort to bond, the two women decided to tell each other secrets as some sick test of each other’s loyalty.  Karen tried to ask about Sherman, but Gizelle said she thought she’d better not tell Karen anything about Sherman, considering the close friendship she maintained with his ex-wife, Kyndall.

Karen, however, seemed to know all about their breakup already, and said during her confessional, that she had it on good authority that Sherman was the one who’d called it quits.  But just how did she come to have this information, the producers asked? Well, she said, she and Sherman shop in the same places, and it wasn’t Gizelle he’d been with when she ran into him at Saks! Interesting.

The two ladies decided on more mundane, but ultra personal secrets to share with each other.  Gizelle admitted that she used hair removal cream on her “hoo haw,”  because waxing left her with unsightly bumps, and Karen confided that she often regrets removing her breast implants because she now has to wear a bra to bed so that Ray won’t see her natural breast flip to opposite sides of her chest when she lies down.  I know, it’s more than you ever wanted to know about either of them, but here we are.

When the day of the party arrived, Ashley was in great spirits, thanks, in large part to the many spirits she was drinking.  She keeps telling everyone that she has curtailed her drinking in an effort to get as healthy as possible in preparation for the baby she and Michael are trying to have, but between Candiace’s wedding last week, and the party last night, she had a lot of Corona! But she may want to start keeping her wits about her these days.  And it has nothing to do with the baby.

As Ashley danced and played around with her friends, Michael was off skulking around corners flirting with the male guests! He could be heard telling one gentleman how handsome he was, and another that he was “rock hard.”  He also spent an inordinate amount of time gushing over Robyn’s husband Juan, who did not join her at the party, and she was pretty sure she heard him say that he would “suck his d***,” although she wasn’t sure if he was talking about Juan or not, and chose to let the comment slide without further comment or thought.

Unfortunately, Michael’s microphone was on, and everyone isn’t as discreet as Robyn. I suspect this will be a hot topic in RHOP for the rest of the season, a fact that Ashley, who is usually far more interested in discussing other people’s lives than her own, is not going to appreciate it one bit! Stay tuned…