The Real Housewives of Potomac Recap: Candiace Gets Married and Gizelle Breaks Up With Sherman… Again

by Tiffany Brown May 13, 2019 3 comments
ShareTweetWhatsappPinterestRedditTumblrMailFlipboard 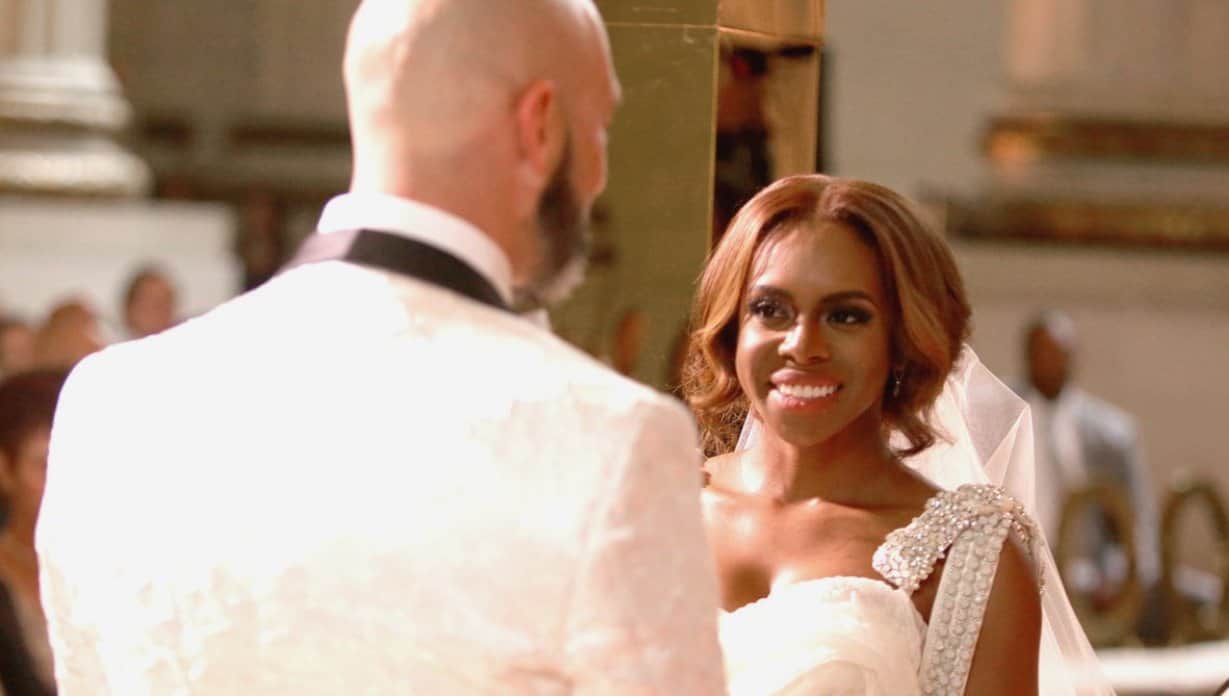 On last night’s episode of The Real Housewives of Potomac, we got to watch Candiace become Mrs. Bassett in a lavish ceremony fit for a princess. The lead up to the big day, however, was fraught with drama and uncertainty.

For starters, the bride-to-be and her mother, Dorothy were both still tense, following their heated argument about Candiace inviting her half-brother, Michael, to the wedding.  You see, Michael, was the product of Candiace’s father’s affair, and despite the fact that decades had gone by, and the fact that Dorothy went on to marry Candiace’s father afterwards, and the fact that they’ve long since divorced and remarried other people, Dorothy still isn’t over the infidelity, or the fact that Michael exists. Despite all of this, mother and daughter decided to let bygones be bygones long enough for Candiace to reveal her wedding gown to her mother for the first time. It didn’t go well.

Dorothy clearly wasn’t crazy about the dress and had a few snarky comments about the length.  Candiace simply brushed them off, and said she didn’t really care if her mother liked the dress because she loved it, and Chris was sure to love it, and ‘Jesus loved it,’ so her mother’s opinion hardly mattered.

Candiace clearly thought they needed to address the elephant in the room, and so she decided to address their spat head on.  Her mother accused her of dumping the “sins of her father” into her lap.  She added that it was wrong and “inappropriate” for Candiace to drag them into her life, and said nothing Candiace said could justify such a thing.  Candiace finally ended the conversation after her mother called her a “diva” with “Daddy issues.” Sheesh!

Things weren’t much better between Candiace and Dorothy on the big day. When Dorothy went to check on Candiace, who was getting her make up done, Candiace told her she didn’t want to see her, and told her to leave. It was a horrible way to start the day, and Dorothy backed out of the room, saying she had no idea where she’d gone wrong with Candiace.  But really, who can blame her? Who wants to be brought down on their wedding day?!

And speaking of being brought down, how would you like to be stood up by the man, you’d given a second chance?! That would suck, right? Well, that’s exactly what happened to Gizelle.  Just hours before the wedding, Sherman called her, and told her that he wouldn’t be escorting her to the ceremony because he didn’t want to be around “those people,” namely Monique. As viewers will surely recall, (no matter how much they’d like to forget) Monique befriended Sherman’s ex-wife, Kyndall, last season, and went on to repeat every single embarrassing thing she told her about Sherman on national television. The juiciest bits involved Sherman’s arrest for indecent exposure during a tryst with an unknown woman in a park.

Gizelle was devastated after Sherman canceled on her, and was really wishing she could just skip the wedding too.  As for Monique, she was actually looking forward to seeing Gizelle and Sherman because she was anxious to apologize to them both, and get back to being friends, if you could call them that. Of course, they weren’t the only ones with tension between them.

Gizelle and Karen were both late.  Gizelle needed a last minute plus-one, and had to wait for her friend, Kal to arrive. As for Karen, I can only assume that it must have taken a while to sew in that much weave.  Either way, the two women were made to wait in the lobby until Candiace, escorted by her father, step-father, and mother, made her way down the aisle, and they could enter the room without causing a disruption. Gizelle was surprised to find that Karen sat across the room, pointedly ignoring her the entire time they sat there. I guess the cookies she baked for Karen as a peace offering for all the trash she talked about her last season just didn’t do the trick. Perhaps she should have gone bigger, you know, a  pie, a cake, maybe a nice torte, either way, those Toll House chocolate chips clearly didn’t cut it.

Ashley and Monique were still in a “strained place,” as well.  Monique was still sore with Ashley for telling everyone just how many martinis she’d had over lunch the day she fell asleep behind the wheel and drove her car into a ditch.  Monique said she needed to own up to what she’d done, and couldn’t abide by such character assassinations (no matter how truthful they were.) What was truly amazing was that Monique managed to utter this sentence without a trace of irony.

Karen was also still angry at Ashley for questioning every aspect of her marriage (despite the glaring issues in her own) following Ray’s tax issues. No one was getting along, and following the exchange of vows, Monique and Karen stood staring daggers at Gizelle and Ashley from across the room, as she tearfully explained why Sherman wasn’t with her. Ashley clucked sympathetically and said all the right things, but it was almost impossible to miss the smile that played at the corner of her lips as she listened.

Eventually, Monique made her way over to Gizelle, and asked if they could have a private chat.  Gizelle, a little tipsy after the cocktail hour, agreed.  Monique began by saying that she wished Sherman were there, because she really wanted to apologize to them both, but Gizelle told her she needed to deal with her, directly. She explained that Monique had dragged her man, and she needed to own how wrong that was, especially since she would have flipped if anyone would have said such things about her husband. She told her that she also needed to own the fact that she’d befriended Kyndall just to get under her skin. But Monique never really got the chance to own up to it, because her husband, Chris, sensing that things were about to get heated, rushed over to whisk Monique, and their unborn child, off to safety.

But the drinks must have had Gizelle feeling all warm and fuzzy because, during the sit-down dinner, she walked over to Monique, and told her that she appreciated her apology, and was ready to move on.  She also made her way over to Karen, and told her that she ‘missed her,’ as she awkwardly, and a bit creepily, stroked her arms.  Karen wasn’t exactly receptive at first, but these two used to have a blast together, and it’s always hard to stay angry with someone you’ve shared so much with, so it was no surprise that before long, the two former friends were laughing and talking. It was clear that it wouldn’t be long before the Lucy and Ethel of Potomac were back to their old tricks.

The reception ended with more drinks, plenty of dancing, and Candiace serenading her new husband with a song she wrote herself.  All in all, it was a beautiful day. Even Dorothy managed to hold her tongue, and just kept her distance from Candiace’s brother, although if looks could kill, she’d have burned a hole into her daughter’s skull as she watched her introducing Michael to her friends, who greeted him warmly.

The show faded to black from there, and everyone seemed genuinely happy–but that may change next week.  There’s a new girl coming to RHOP, and by the look of things, she’s going to get off on the wrong foot. Stay tuned!